Yesterday wound up being a fairly busy day, and I never got a chance to check in and say hello to you all! Soooo, how about I fill you all in a bit on the highlights from our day?

Saturday night wound up being a late, after 1am, night with friends so I let myself sleep in a bit once again. Upon waking, it didn’t take long to realize I was starving and ready for some food. I needed something quick, so cereal was the name of the game. 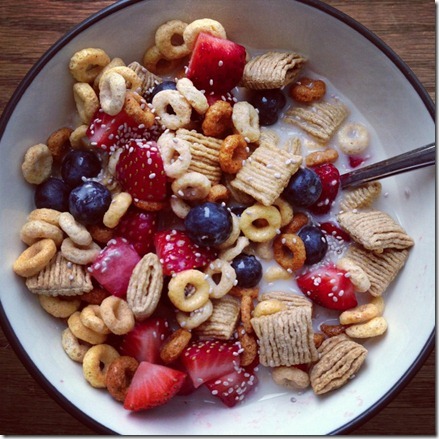 We all had a fairly lazy morning (except for Herm, who apparently enjoyed the cereal just as much as I did), but I think Cody won the award for laziest. 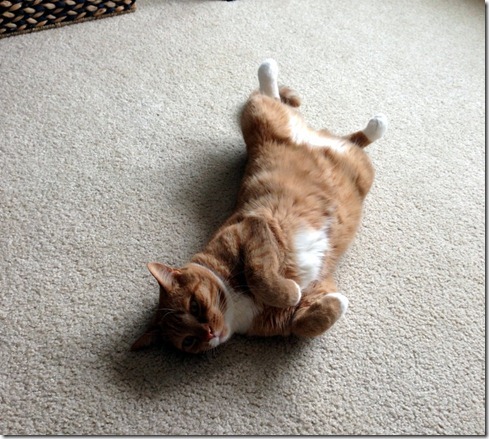 He was lounging around alllll morning long, and my gosh was he being stinkin’ cute. 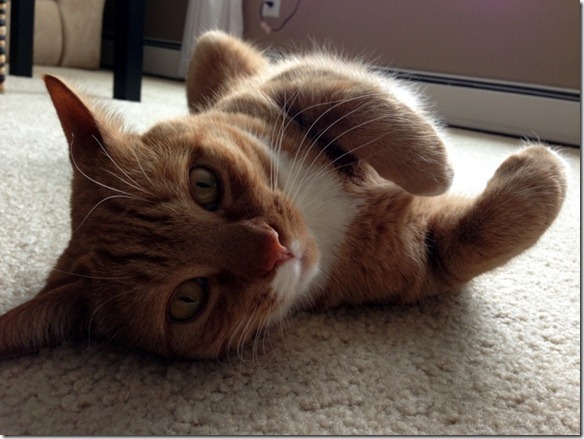 Eventually, I got myself moving a bit and decided to do a workout (this workout, to be exact) and it felt great. Check out that growing bump! 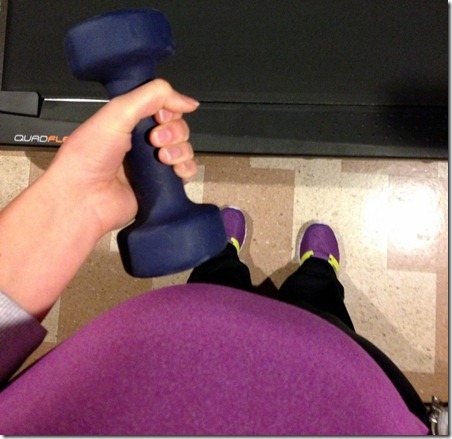 Workouts were a bit sporadic for me this past week, so I’m hoping to get back into somewhat of a routine this coming week.

The afternoon consisted of some grocery shopping and baking for me, while Jay went out to pick up a little something for an organization project. As I walked back through the door, I was once again greeted by my lazy little fur ball, who decided to make a new bed out of the hamper. 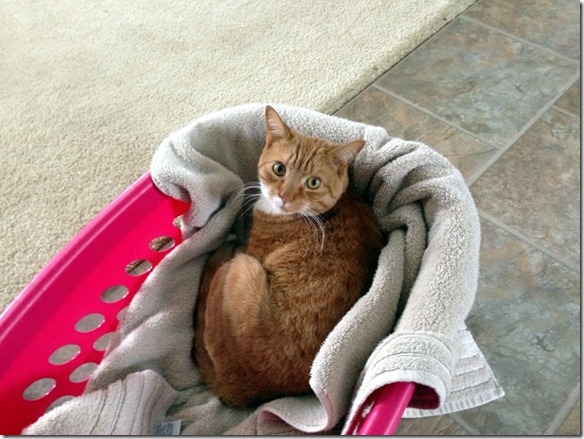 And then I got to work on baking some cupcakes. 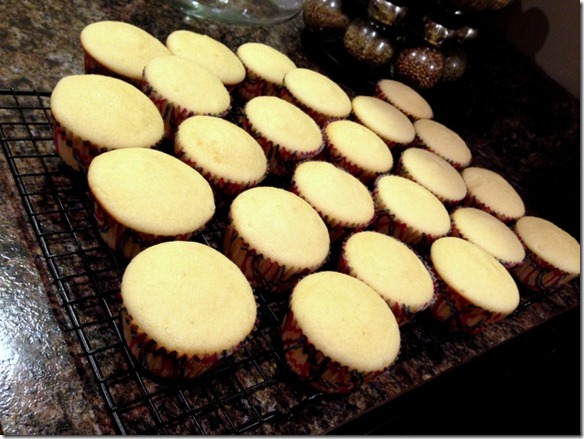 That, of course, was my second batch of the day, since I apparently forgot to set the timer for my first batch and they totally overcooked. #fail

The cupcakes are actually for tonight, and are going to soon be filled and decorated with one of these two colors… 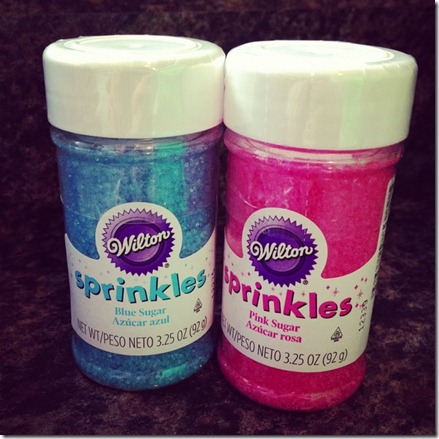 Because today we’re finding out if Baby Tooth is a boy or a girl!!!!

We’re having our parents and my brother over tonight for the “big reveal,” so since I’ll only have a little bit of time to finish making the cupcakes, I made sure of baking them and getting the frosting prepared. 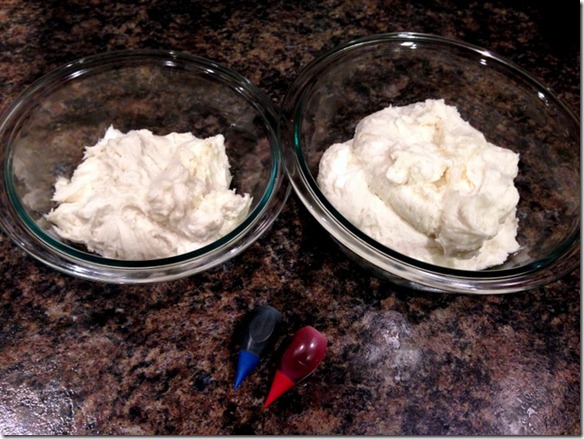 All I’ll have to do once we get home is color the frosting on the left either pink or blue, and that’ll be the filling of our cupcakes. I’ll decorate the tops white with both color sprinkles to keep the surprise a secret until they bite right in. I’m soooo, so excited!!

I know many of you have been asking if I’m going to share the big news to everyone and of COURSE I’ll be sharing! BUT…not until next week. Jay and I want to be sure that we tell all of our closest friends and family first, some of which we won’t be able to see until this coming weekend. So yes, there will be a little bit of a delay in sharing the news on the blog, but I promise I will soon.

Other highlights from Sunday? Well, Jay did a great job of reorganizing our bedroom closet. The before was really a jumbled mess… 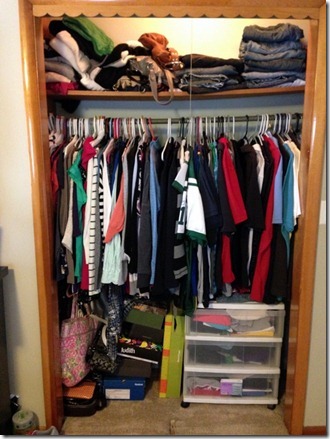 But the after is already giving us some more room. 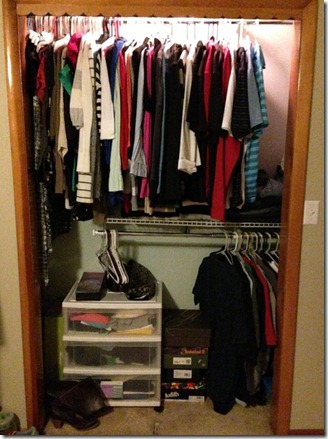 Unfortunately, we have very, very small closets so our options are limited to what we can do with them. I’ve still got to play around with a few things in there, but I’m definitely happy with the outcome.

Since Jay and I both worked so hard all afternoon (okay, not really that hard, but still) we rewarded ourselves with quite a treat for dinner…and that would be Five Guys. 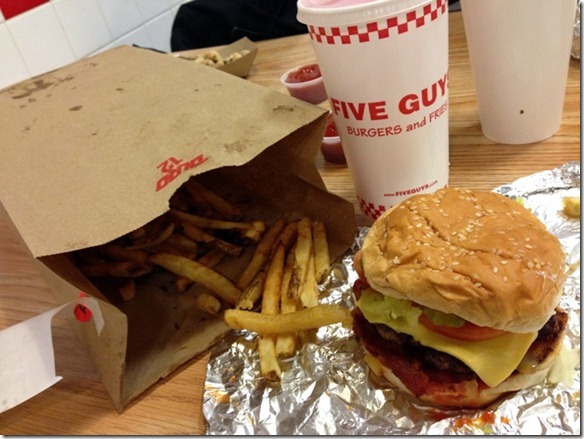 You guys, when I tell you that I’ve been craving a Five Guys burger and fries for weeks now, I’m not even kidding. Remember when I had my Whopper craving back at the beginning of my pregnancy? Well, that eventually faded, but was quickly followed with Five Guys. So really, this has been about 10 weeks in the making. 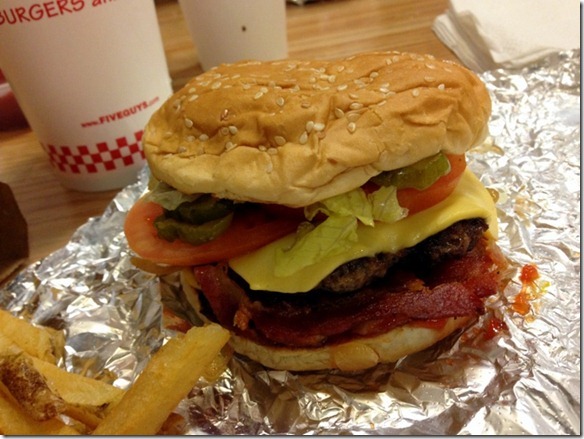 A burger with all the fixings (bacon, lettuce, tomato, pickles, grilled onions, ketchup mustard) plus way more fries than I should have had was exactly what I needed to fulfill that craving. Totally hit the spot.

So there’s my Sunday in a nutshell. Another great weekend overall, which went way to quick as always. Time to get back to the grind of another work week!