Ohhh, 2012. It was such a year. A great year, a challenging year, and most importantly, a life changing year. I’m really looking forward to doing my 2012 review post in the next couple of days, because it gives me the opportunity to look back and reflect on everything that’s happened…and there’s definitely been a LOT that has happened!

2012 was also a pretty fun year for the blog, as it continued to grow (thanks to all of you) and went through some of its own changes here and there. One of the plugins that I use (jetpack, in case fellow bloggers are interested) always sends me a year-end summary, highlighting some key points throughout the year. 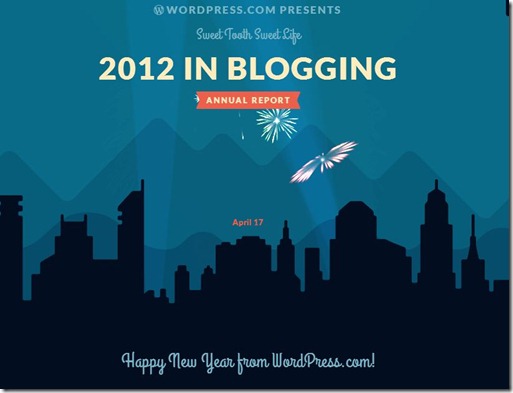 As it turns out…

So much fun to look over all of those stats!

Last night, Jay and I spent the evening ringing in the new year with the Mexico Crew. We ate, we drank (some of us drank sparkling red grape juice), we danced our faces off to our favorite Wii game, and I think the most surprising part was that I kept myself awake until almost 2am. Considering I can’t make it much past 9:30pm these days, that was quite a shock…then again, I guess it helps when you’re with good friends.

This morning, all three four of us spent a little bit of time lounging on the couch, enjoying a leisurely breakfast.

Once that is finished digesting, I’m heading down to the basement for a workout. Not quite sure what yet – maybe some walking, maybe a modified version of yesterday’s workout – but I’m ready to do something (even though I did get a pretty good workout between 10pm – 1am last night with our Wii game dancing).

Plans for the rest of today include catching up on some blog stuff before it’s back to work tomorrow, finish putting away the Christmas decorations, a little cleaning, and perhaps a little online shopping.

I haven’t taken many pictures over the last 24 hours, so I don’t have all that much to share with you…but I wanted to pop in and wish you all a VERY Happy New Year. I have a feeling that 2013 is going to be an incredible year, and I cannot WAIT to see what else is in store!

What are you looking forward to in 2013?