Today I have another goal that I created for myself and our family this year…establish a budget.

For years, Jay and I have been making “attempts” at trying to figure out and establish a budget that we can work with. I’m pretty sure it started back when we got married six years ago and decided that we would combine all of our accounts into one. It’s worked well for us, and I’m very happy we did it…but we’ve never done much beyond that.

Every few months, we wind up saying something along the lines of, “okay, let’s keep track of ALL of our receipts for this month so we can get an idea of our actual spending.” And each and every time, we wind up with an enormous pile of random receipts that go wayyyy beyond the one month that we originally planned on tracking. 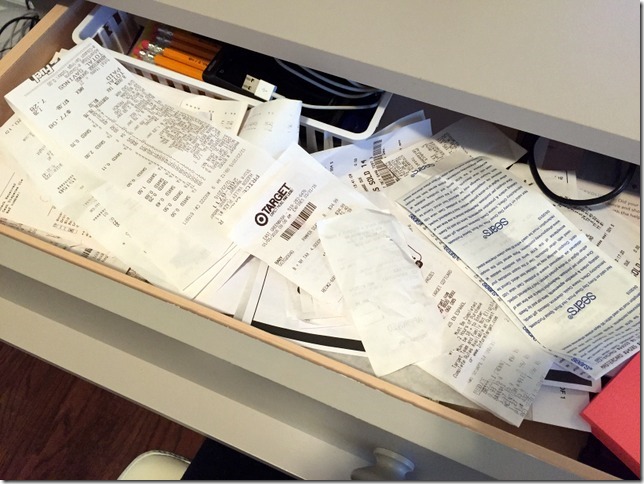 It’s a mess. And every time we say, well I mean, we’re still doing fine so I guess we really don’t need to worry about anything?!

But I’m not dumb. I have NO doubt that if we actually did take the time to see where we’re spending all of our money, we’d absolutely come across things that we’d find unnecessary. And as we’re getting older, it really is time to start honing in on our spending and how we can better save and invest. After a new home last year, and a new baby coming later this year, it really is time to start getting a plan in place.

So recently, I decided to sign up for an account with YNAB (You Need A Budget). YNAB is a personal budgeting web app (with companion apps for Android and iOS), but part of the reason I really became intrigued by this one over the others out there is because they do so much more than just let you track your stuff. We’ve tried that before and have failed miserably. YNAB teaches a philosophy that has really come to make so much sense, and it’s really shown how budgeting isn’t restriction. It’s about how to do more of the things that matter most and having total control of your money. 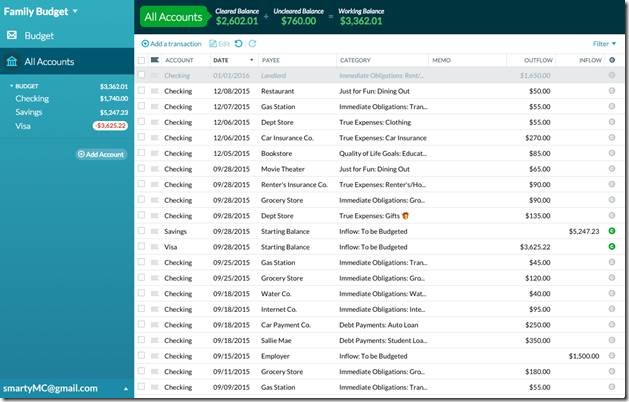 (this is a stock screenshot and not our own)

There are “Four Rules” behind the philosophy of YNAB that have totally made Jay and I start to think differently about our money.

Rule One- Give every dollar a job

Money is finite, and no matter how much of it you have, you need to prioritize where it goes. As you prioritize what’s most important to you, it will become clear where you should spend your money. Every one of your dollars should have a job. Decide in advance what you need it to do, where you need it most, and work only with the money you actually have.

To put it simply, your true expenses are a combination of your everyday expenses and the less frequent expenses (like car repairs, quarterly insurance bills, etc.). They are everything you have to or want to pay for right now, plus everything you’re going to need to pay in the future. They include monthly things like rent and cell phone bills, but also things like summer camps, unexpected home repairs, and back-to-school shopping.

Rule Three- Roll with the punches

You can and should set broad outlines for your money. Clarify your priorities and set goals. But when the details change, (which they will), or your priorities change, change with them. Making a change doesn’t mean you’ve failed at budgeting; it just means you’re adjusting.

Imagine that you’ve taken care of your obligations and true expenses and have a plan to deal with your debt. Yet, because you’ve been prioritizing so effectively, you have money left over that still needs jobs. You can send that money right to next month to do next month’s jobs. When you do, you delay the amount of time between receiving and spending your money.

For us, we have a number of expenses we would currently count as our true expenses (aka, ones we have and have no plans of giving up):

And of course, there are a number of other expenses that we have, which are not necessarily monthly or “essential,” but more like dining out and fun money.

We’re still very much in the beginning stages of working out our budget, but initially, we have budgeted for and have created a plan for the non-negotiable, they’ll-turn-off-the-lights-if-I-don’t-pay-this types of expenses: mortgage, taxes, groceries, utilities, and child care. There are still quite a few more that we’re trying to figure out, but these questions from the YNAB guides have been a huge resource for us when trying to make a decision: 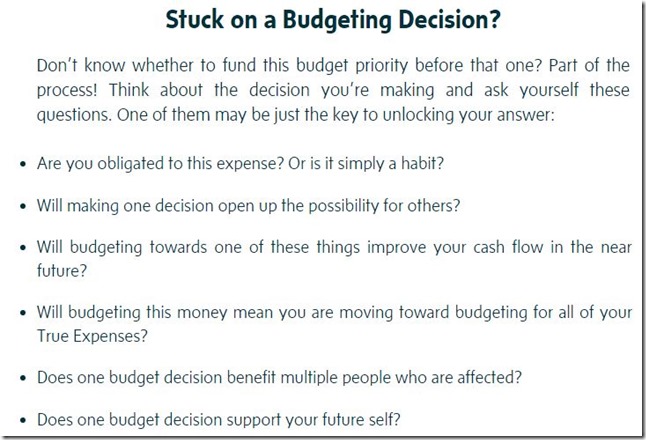 There are a number of features that YNAB offers on their all-new web based version, but the feature that I’m currently focusing on is creating goals for your money. One of the main goals that we currently have is to pay off my one final student loan. There’s still a pretty decent amount left on it, but it’s one of those things where I always think, “why aren’t I contributing more to this when I have the money to do it?” So now, that goal is to get rid of that thing for good!

Other goals we have so far for this year?

Like I mentioned before, we’re still very much in the beginning stages of this whole budgeting thing, but I really am excited to continue to dive deeper into YNAB and see just how many improvements we can make with how we allocate our money. And I have every intention of checking back in on this with you guys in a couple of months to see just how things have gone thus far. Yes, I’m sort of making you all hold us accountable!

For any of you who think you may be interested in trying out the whole budgeting thing for yourself, I’d really recommend YNAB. From what I’ve seen so far, it’s been incredibly user friendly, and the YNAB guides have also provided a ton of useful support resources which have really come in handy. They also offer free daily, online classes, and YNAB is free for all college students!

Want to try out YNAB? Sign up for their 34-day FREE TRIAL by CLICKING HERE!

Questions for today: Do you have a budget? Have you ever tried budgeting and failed? If you’re an established budgeter, do you have any tips for the newbies?

Disclaimer: This post is sponsored by YNAB. All opinions and thoughts/goals regarding my personal budget are my own and I do not get any incentives/kickbacks for you signing up. Thank you, as always, for your continued support surrounding sponsored content on STSL. <3