Yep, no worries…I’m still around and without baby. I heard from a few of you, wondering if there was any news, since I’ve been a little MIA the past couple of days, but Baby Tooth is still comfortably hanging out where he has been for the past 9+ months.

I didn’t wind up with too much to chat about on Wednesday (although I did love reading through all of your comments on my last post), and yesterday I spent the entire day poolside, so the thought of posting never really even crossed my mind. Yes, yesterday was an absolutely fantastic 4th of July!

Jay and I decided to have a few friends over last minute to hang out by the pool and BBQ throughout the day. The two of us were out there by 11am, and while the other party animals trickled in a little later, none of us wound up even going inside until about 9pm. It was definitely a full day’s worth of awesome.

My friend Kate wound up making this flippin’ delicious sangria mocktail that totally knocked my socks off. 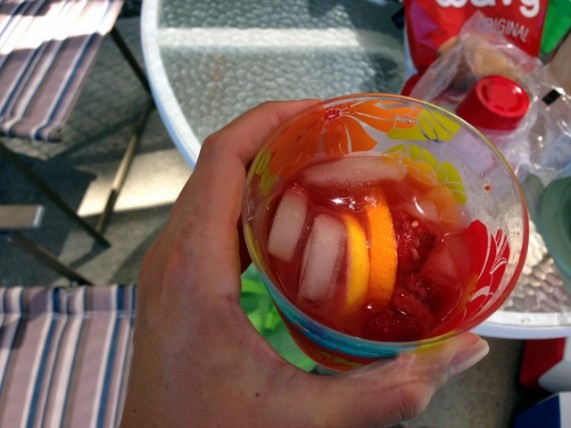 Since I’m not feeling all that ambitious in the kitchen lately, we told everyone we were going to keep it simple on the food front, with basically some grill food, chips, dip, and then whatever anyone else wanted to bring. Well, thank goodness I have friends who don’t mess around when it comes to food, so we were more than stocked with plenty of good stuff. 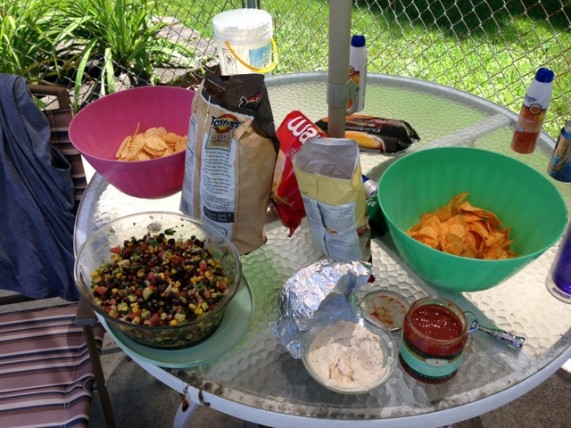 Around 2-ish (maybe? I was hardly keeping track of time) we decided to fire up the grill for round 1. Burgers, hot dogs, and veggie burgers were the name of the game, along with some fruit salad and potato salad, which I did actually make myself on Wednesday evening. I’ll have to share the recipe with you guys – it’s the same one I made on Father’s Day, and everyone really seems to enjoy it. 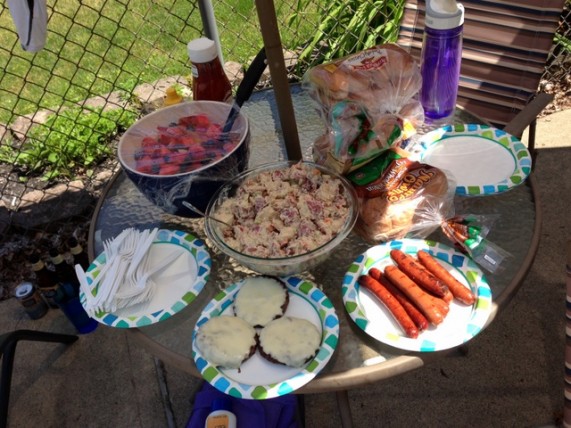 For lunch, I loaded up with an all-beef hot dog, some potato salad, fruit salad, and bean salad with tortilla chips. 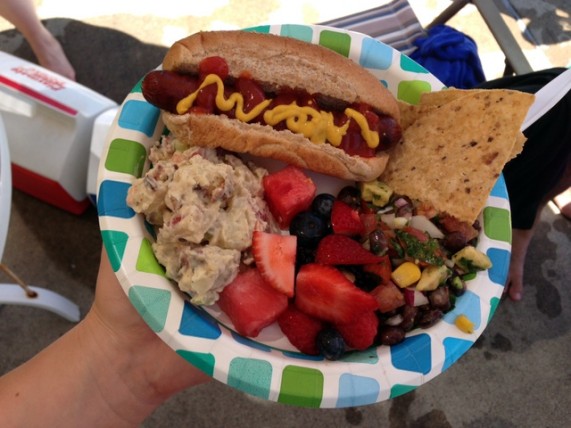 Mind you…this was all after snacking my face off with about a gazillion chips and dip. No shame.

Throughout the afternoon, the girls mainly hung out on pool floats and chatted on whatever was the opposite side of the pool that the guys were on. This was mainly because they were basically trying to drown each other while playing the most intense games of pool basketball and we didn’t need any part of that. ;)

Back at my bridal shower, I received the most awesome wine basket from some friends, which was very similar to the one that I made for Mal back in November. Well the last and final bottle to the basket was a bottle of Ciroc vodka that, as you can probably read, was to be saved for the “First Baby.” Jay had been waiting to be able to share it with some of “the guys,” and somehow it became a challenge to see if they could start and finish that bad boy all in one afternoon.

Well, they were most definitely successful, and the bottle has been emptied. Shenanigans, I’ll tell ya!

We were all joking and saying that Baby Tooth can most definitely make his appearance anytime now, since the bottle is gone. Hopefully he’s listening. :)

A few more hours later, it was about time to fire up the grill once more for round 2, and the grill master got to work. 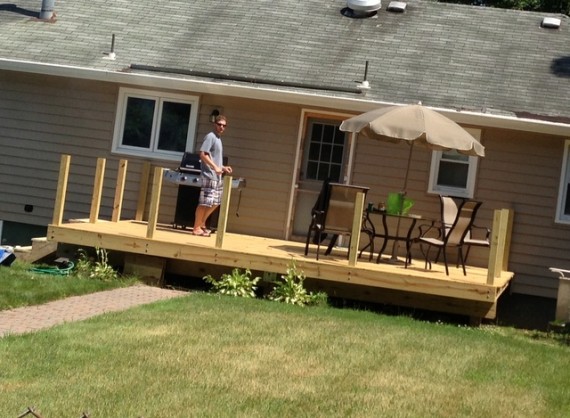 On our still-in-progress new back deck, no less! We’re definitely making progress (HA, I say “we” like I have anything to do with it…I do not) but we still have a little ways to go.

For my round 2 (aka, dinner) I went with a veggie burger, some salad, and a little more potato salad. 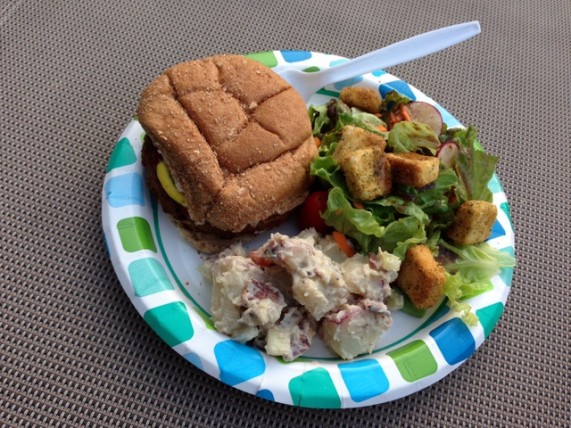 Totally hit the spot, after a long, hard day of sitting poolside. ;)

For dessert, we also had this incredibly awesome rhubarb “dump cake” that our friend Mal found on Pinterest.

Don’t worry…I stalked her Pinterest page and found the recipe she used..it’s THIS ONE.

I don’t know if I’d ever had rhubarb before, but man…if it always tastes as good as it did in that recipe, then I am most definitely a fan. SO good.

So yeah, that was basically our fantastic 4th of July. No fireworks, minus the couple we saw our neighbors shooting off in the backyard, but I’m cool with that since they aren’t really my thing. And now today, it’s back to work for me…thank goodness it’s Friday!

How was everyone else’s 4th of July holiday? (and for my non US friends, how was your 4th of July regular day?) :)

« Why I Won’t Be Giving Post Baby Body Updates
Another Date Night, While We Can »