Alright, so yesterday was just not a super day. I had a hard time sleeping the night before and wound up getting struck with some pretty crappy case of the queasies. And to think I was out of the clear at almost 22 weeks along!

I mean hey, it happens. But it just had me feeling pretty BLAH yesterday, if ya know what I mean. I wound up switching my alarm and nixed the workout I had planned for the morning, knowing full well I wouldn’t have the stamina for any sort of extra exertion. As far as food, it was tough because I was hungry but the thought of most things made me queasy.

So I stuck with something simple and prepared a bowl of cereal + a mug of tea (using one of the tea bags from this trimester’s bump bundle). 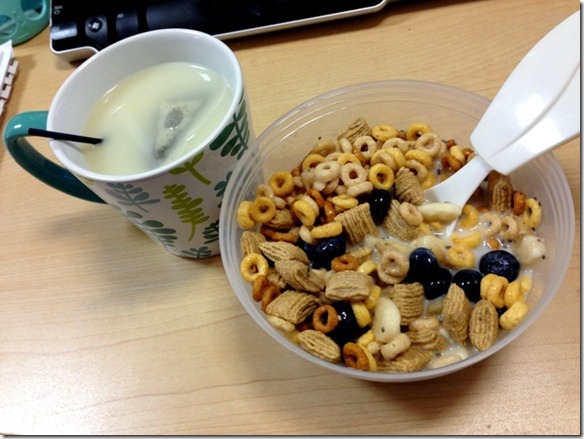 My hunger held off for a few hours but I needed a little something before lunch. At this point, I almost always wind up having some sort of snack with peanut butter, but believe it or not, the thought of peanut butter right now is just sounding SO unappealing. I’ll tell ya…this pregnancy stuff is craaaaazy sometimes.

So instead, I had some cat cookies that I packed, and they seriously tasted great. 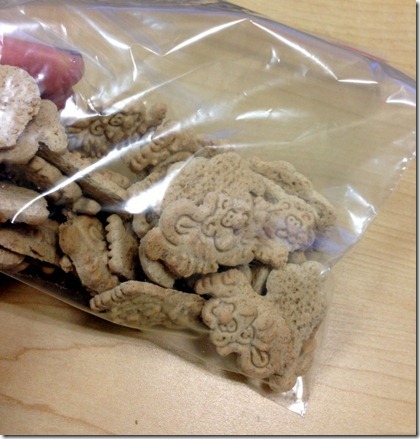 I had to run out on my lunch hour so by the time I got back I was definitely hungry again. I had packed a random whole wheat roll in the morning, just in case I didn’t think I could stomach anything else. But by the time I got back to the office, someone had heated up their lunch – which reminded me of something maybe like chili? – which immediately sparked my desire to eat the lunch of leftovers I brought. 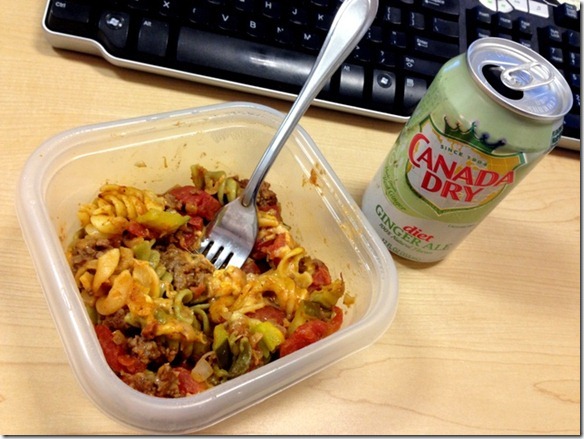 So I ate my leftover cheeseburger casserole + a diet ginger ale on the side…no maraschino cherry juice this time.

By the time I got home from work, I was just feeling wiped. I literally changed into my cozies and parked it on the couch under my blanket for the rest of the evening. Jay and I had originally planned on going out to do some glider shopping, but we decided to hold off on that until tonight.

I had no desire to get up to even make us dinner, but I’m very lucky that I have a man who a) can manage a meal on his own and ate leftovers, and b) prepared exactly what I said I was craving and delivered it right to me on the couch. I’ll tell ya, he is a keeper. 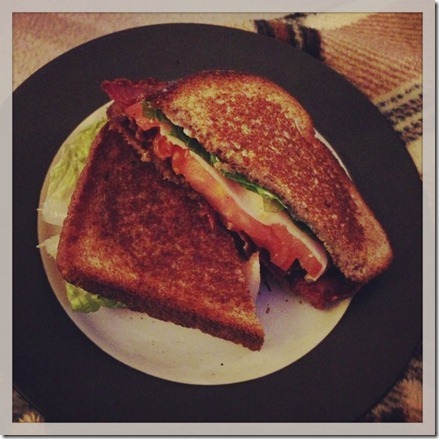 We had been watching Diners, Drive-Ins, and Dives on the Food Network, which I’m thinking may have sparked my craving for a BLT. Not sure if that’s exactly it, but I wanted one in a bad way. So Jay delivered, grilling the bread instead of toasting (less cuts on the roof of the mouth!) and added a slice of provolone cheese. It totally hit the spot.

After dinner, I wound up lasting a couple more hours on the couch before calling it a night, but I had my Cody curled up with me almost the whole time. 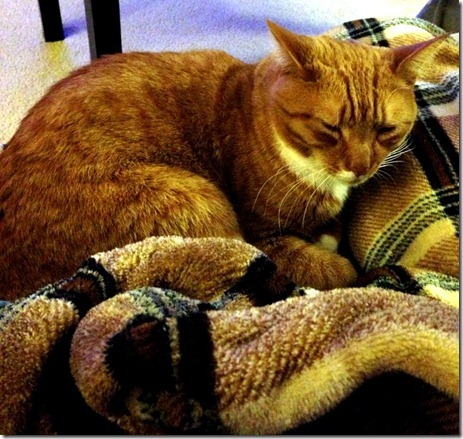 I think he was making sure his momma and little brother were doing okay…then again, let’s get real. He just loves this blanket as much as I do. ;)

THANKFULLY, I am feeling much better today, although the queasies come and go, and I was even able to get up for a 30-minute strength workout. The thought of peanut butter and coffee still make my stomach turn today (so weird!), so breakfast is going to be a yogurt with fruit and granola + tea.

**The winner of the blog header giveaway has been chosen! Check out the original post to see if it was you.