This post is brought to you by Ghirardelli Intense Dark™ Chocolate.

Soooo, do you guys remember when I shared this photo with you all this past Monday?

Umm, yeah. The day the mailman dropped (no, wait – hand delivered!) this package to my doorstep, he immediately became my new best friend. I mean, how could he not?

(FYI: If you want to be best friends, bring me chocolate. Lots of it.)

So how did I get so lucky to wind up with all of this fantastic PMS cure stuff? Well, I wound up being selected to participate in this campaign through the DailyBuzz Food Tastemaker Program, so I received 14 bars of dark chocolate: 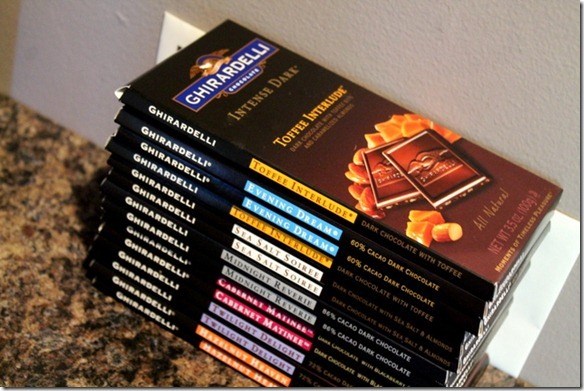 All this past week, Jay and I took turns sampling the various bars of chocolate just as they were; not added to a dessert, not baked with…just plain and simple dark chocolate. Needless to say, our after-dinner desserts were taken care of this week!

Most of the times, we just ate the chocolate without anything else. A couple of times we did try them with some other food, and we did pair a couple of them with a glass of wine. 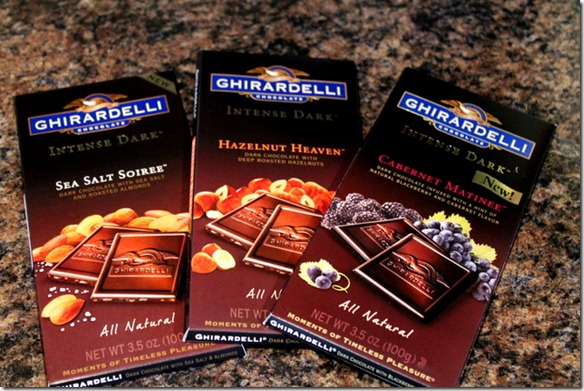 I’m actually really hoping to try out the Cabernet Matinee with a glass of red wine sooner rather than later. Jay and I are mostly white wine drinkers, but I have a feeling that if it’s anything like the wine and chocolate pairing Jay and I did a couple years back, it would just be incredible. 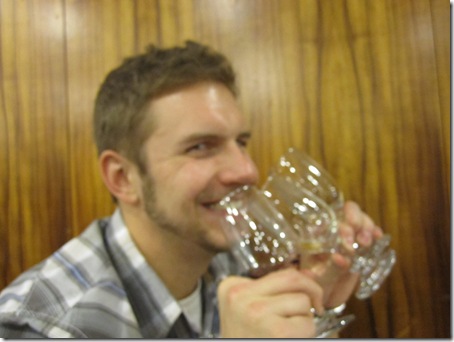 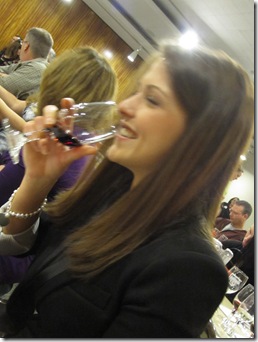 That was such a fun day.

One of our favorites was the Sea Salt Soiree. I love when dark chocolate has a little added crunch to it, and the almonds delivered just that. Plus, you can basically pair any chocolate with sea salt and it’s incredible, right? 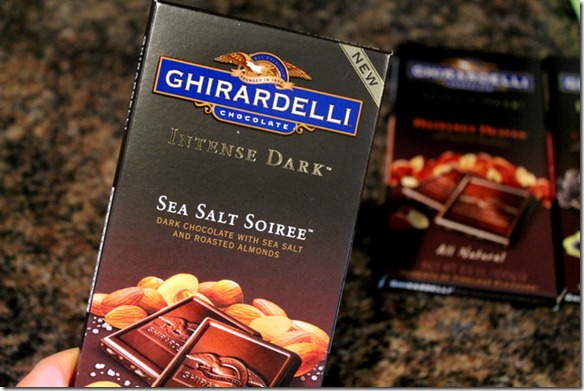 I was actually drinking a glass of white wine when I tried this one, and call me crazy, but it actually wasn’t a bad pairing?! I know dark chocolate is supposed to pair best with red wine, but I apparently don’t have that keen sense of good wine pairings. I just like to drink the stuff. 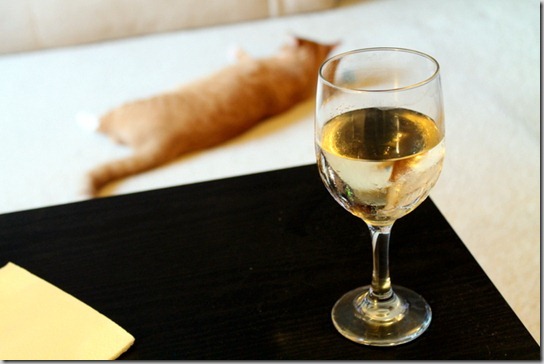 Another favorite of mine was the Hazelnut Heaven. 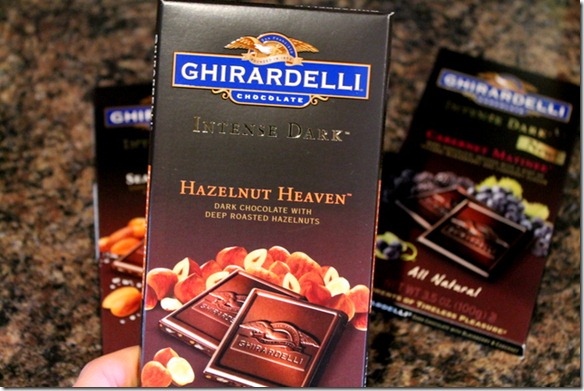 I don’t know what it is, but any sort of chocolate with hazelnuts always reminds me of Christmas. It’s funny because, as much baking as we do over the holidays, I don’t think there is one thing that anyone in my family ever makes that even has hazelnuts in it. 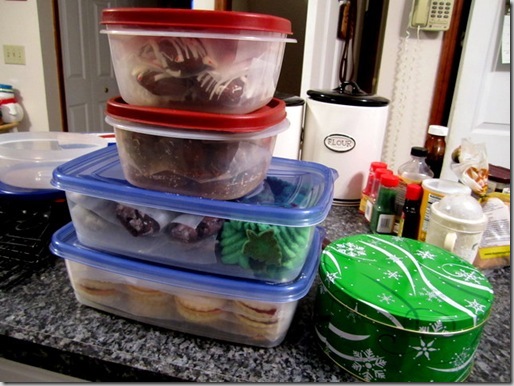 Then again, maybe it’s because hazelnut sounds almost like chestnut, which makes me think of them roastINGGGGG on an open fiiiiiiireee. (<—that’s me singing)

Then againnnnn, maybe I’m just rambling, so let’s move on.

There were a few bars that Jay and I were not total fans of, which we really weren’t surprised by… 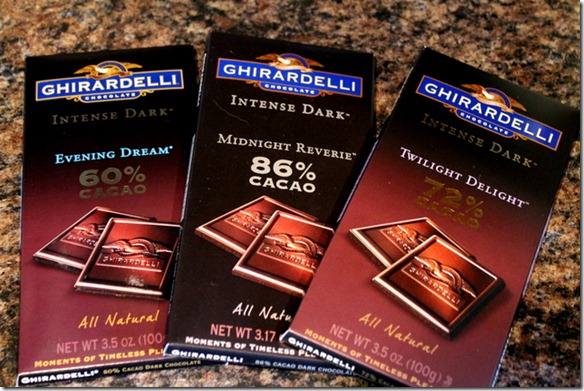 These three bars were just a bit too dark for our liking and sort of gave us a few of these squinched face moments. 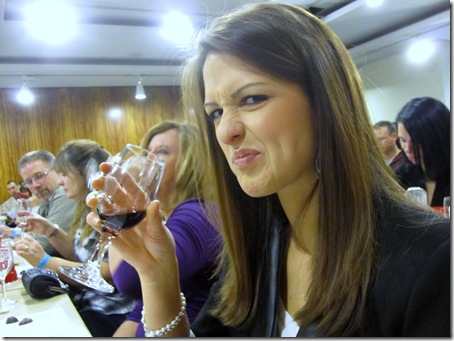 I’ve never been a huge fan of just plain chocolate bars (I know, call me crazy, right?). I’m thinking that these may end up being good to bake with – just finely chop them up and add them into a cookie recipe or something. Nowwwww we’re talkin’!

Out of all seven flavors of dark chocolate that we tried though, we most definitely ended up with a clear winner… 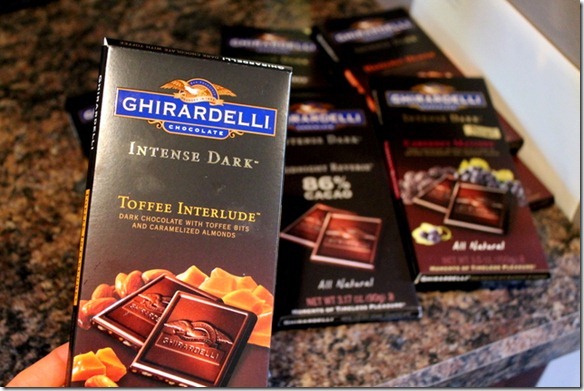 The Toffee Interlude…mixed with toffee bits AND caramelized almonds?! Sign. Me. UP. 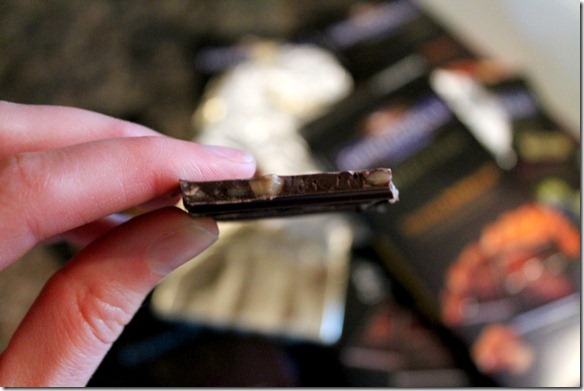 Want to know something funny? Just writing about this one got me so excited that I had to go grab another square of it. 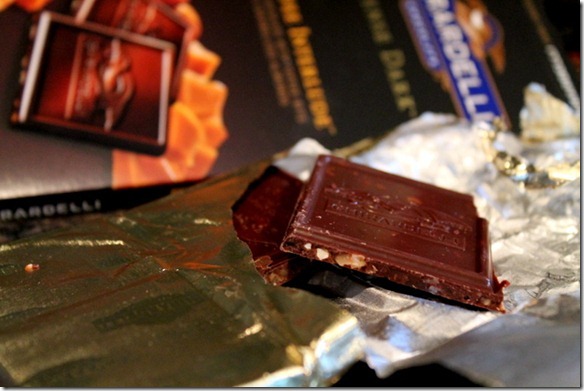 What can I say? The stuff is GOOD.

Thank you SO very much to my friends at DailyBuzz Food for offering me a major chocolate fix this past week. It was much needed and very much appreciated!

Are you a fan of dark chocolate? What would have (or is) your favorite?