So you guys want to hear about one of the super fun perks that is available here at the new job? 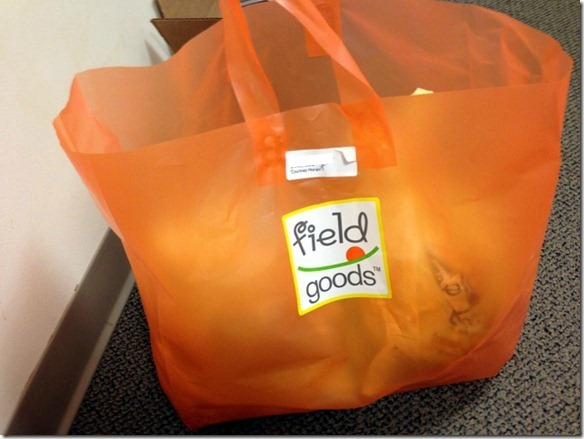 Our company has an account with Field Goods, a subscription-based delivery service that offers produce and other items from small, local farms. There are a number of different subscriptions that you can sign up for, including various sizes of produce (veggies, fruit, or both), local cheeses, breads, and herbs.

For the first few weeks that I was here, I noticed the bags that would come in (every Thursday morning) and was really intrigued by it, so I decided to check it out and order a subscription. Based on what I thought I’d need, I decided to go with the small fruit and veggie delivery, which costs $20.00 per week.

Yesterday just so happened to be my first bag, so I was really excited to check it out. 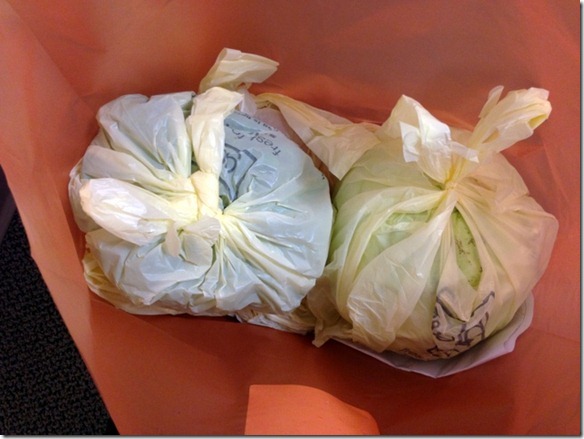 Inside this week’s bag were pea shoots (totally new to me), 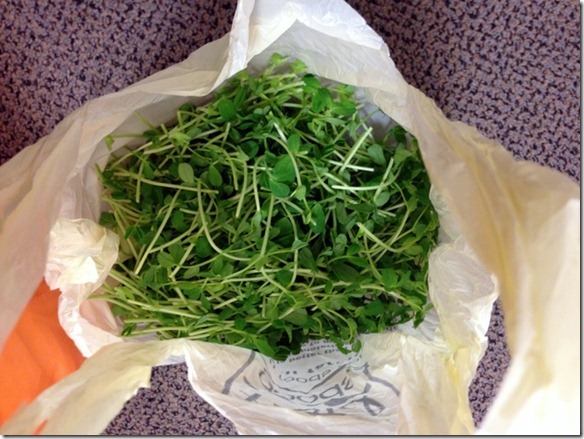 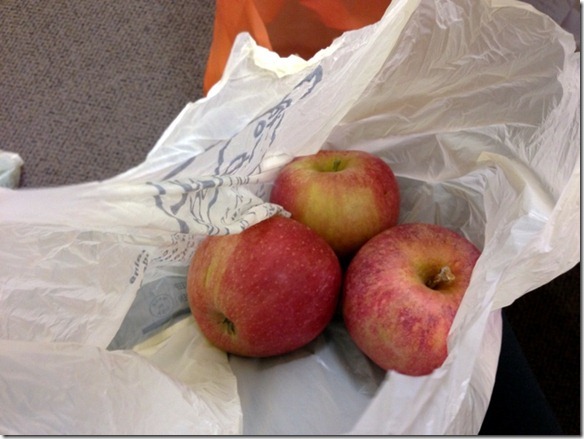 Watermelon radishes (also new to me), 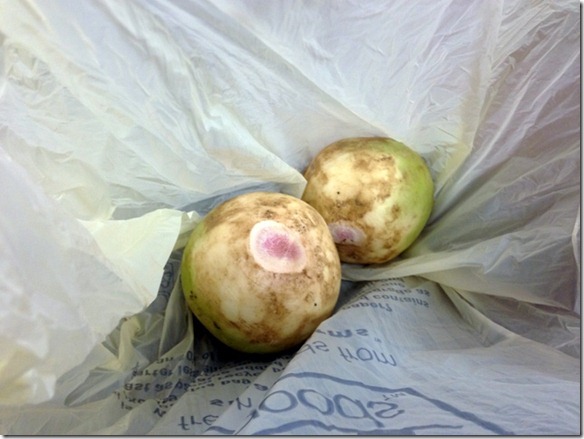 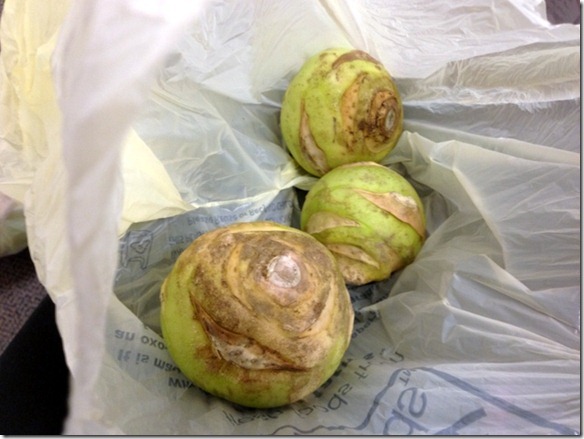 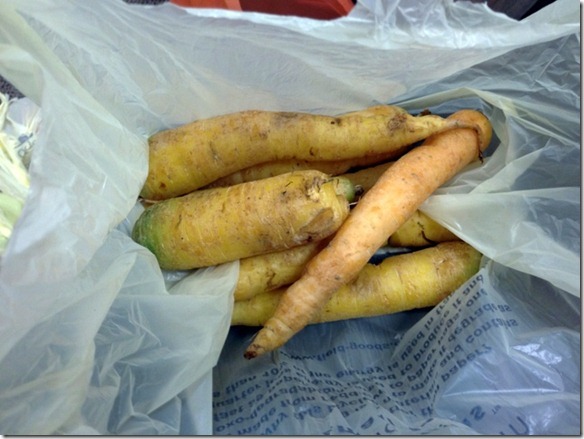 and a head of cabbage, which was actually added to my bag to replace the mushrooms that would have gone in. Field Goods tries to make every effort possible to give you a great bag of produce, so if there’s something you don’t like, they’ll try their best to replace it with something else.

Each week, along with the produce in the bag, you also get a list of everything, which farm they came from, the farming methods used for them, and a number of recipe ideas. 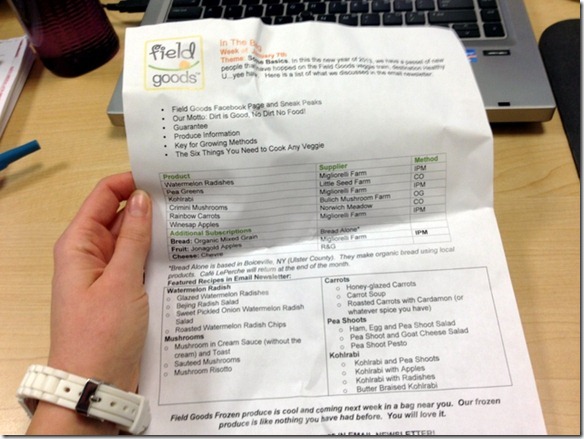 The recipe ideas actually also come via email at the beginning of the week, along with all of the items that will be in the bag. I thought that was cool, since it gives you somewhat of a heads up on what you can expect. 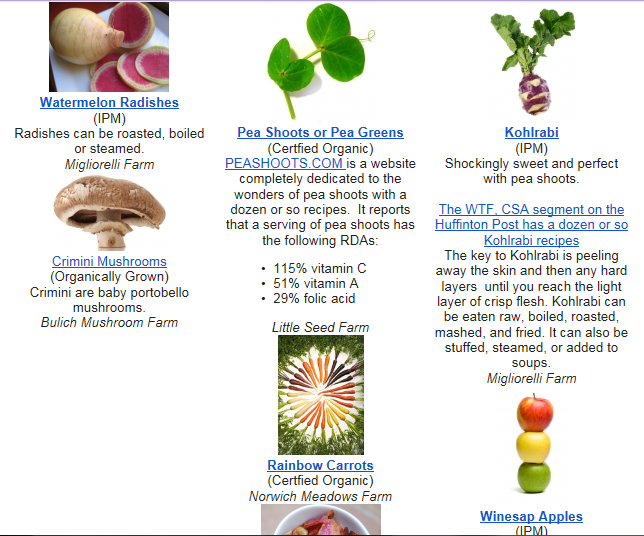 So right now, I’m kind of using this subscription on a trial basis (you can cancel anytime). I love the idea of having local, mostly organic produce delivered right to me; however, it’s very possible that I could wind up with many bags that look like this one…full of items I don’t typically buy or eat. On the one hand, I could use this to my advantage, as a way to try out new-to-me items. But on the other hand, I would hate to see myself get lazy and let anything go to waste.

So I guess we’ll see what happens with these new little gems! A few of the recipes that were sent sound pretty good, but I’m also going to check around some more for some others. That being said, if any of you have ever had/prepared any of the new-to-me items above, feel free to share any tips, tricks, or recipes! :)

So last night, once I got home from work, I immediately changed into my workout gear, knowing full well that if I sat down at all, I’d be done for. I started my workout with a quick, 10-minute bodyweight circuit and followed it up with a 30-minute walk on the treadmill. I’ll tell ya – it was SO nice to be able to get back into the swing of things! I’m really looking forward to (hopefully) getting back into a routine again.

Once I finished up with the workout, I changed into my cozies, and put together a quick dinner. 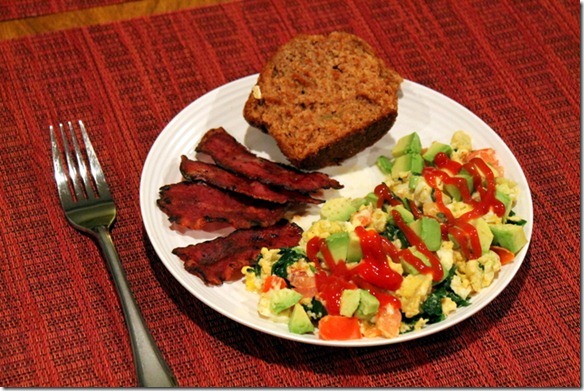 I was on my own, since Jay had to work late, and I wound up with a breakfast for dinner craving, so that’s what I went with. 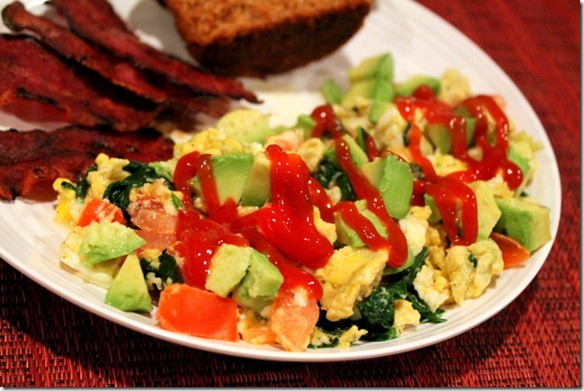 And the last half of my cinnamon Greek yogurt bran muffins. Man, they were goooooood. 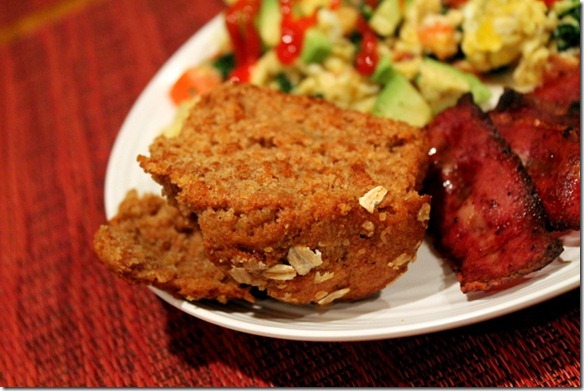 Once I finished up with dinner, it was time to veg on the couch. Unfortunately, Jay didn’t get home until late, so we only managed to get through about two of our bazillion DVR’d shows, but that’s alright…we’ve got a whole weekend ahead of us to catch up!

Now, I’m just anxiously waiting for 5:00 today, so we can go head on over to Joe and Kate’s house. Word on the street is that we’re having a Chipotle-inspired dinner this evening, complete with make your own bowl/taco/salads. Eeeeeeek, I’m so excited!!

Have you ever subscribed to anything like a produce delivery service? Do you think it’s something you would be interested in doing?

« Finally Getting Back To Normal
Memories From 2008 »