Something about the fact that we’re less than two months away from this kiddo turning a year old is absolutely blowing my mind.

The days can be long for sure, but geez, these months are flying!

JUST FOR FUN: HERE’S A LOOK AT LUCAS AT 10 MONTHS!

According to an unofficial plop onto the home scale, it doesn’t look like his weight has changed all that much since his 9 month appointment (right around 23-24lbs) and I have no idea on his height?! 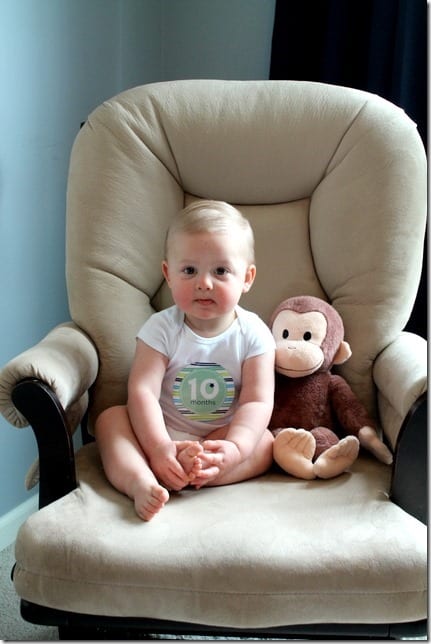 Alex is still nursing, which I’m very thankful for, but I have no idea how much longer my supply is going to last. It seems to be dwindling a bit more lately, but whenever I’m home with him and he exclusively nurses, he never seems to need/want more. So I guess that’s a good thing?! Since I still try to follow an eat/play/sleep routine, that usually has him nursing about three times a day (at wake up and after both naps) + one formula bottle at bedtime. When he’s at daycare, he guzzles (2) 6oz bottles of breastmilk + an extra 4oz bottle of formula.

He’s a little less distracted when he nurses these days, and lately when it’s just the two of us, I swear he’d be content to just hang out with me all day in his rocking chair if we could. He’s been extra snuggly which I absolutely adore…and it’s those moments that have me still pumping an extra time right before bed in an attempt to try to keep up whatever supply I have left.

For foods, we still do an occasional puree (i.e., if we need something for him to eat fast!), but he tends to be happier with finger foods. And he’s getting quite good at eating them, too!

We tried all sorts of things over the past month, and honestly, as long as it’s soft and can be easily cut into bite sized pieces, pretty much nothing is off limits. A few favorites right now are:

Alex has gotten into a pretty sweet napping routine, and I’m enjoying it while it lasts because I know it’ll inevitably change! Right now he’s pretty much on the 2-3-4 hour wake times (i.e., he’s ready for his 1st nap about 2 hours after waking for the day, 2nd nap is 3 hours after waking from 1st nap, bedtime is around 4 hours from wake time of 2nd nap). His morning nap is usually around 1-1/2 to 2 hours and the afternoon nap is usually between 1 to 1-1/2 hours long.

He almost never needs help falling asleep on his own for his morning nap, but will occasionally need a few extra snuggles for his second nap. There have been a few days where he just won’t settle for nap #2, but I’m usually able to give him a little “boob snooze” that lasts long enough to hold him over until bed time. <3 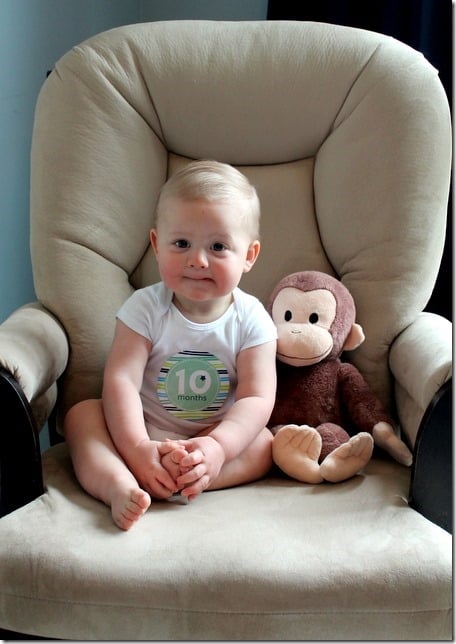 Nights have gotten a little more predictable these days. Most nights, he’s down for bed around 7-7:15pm and will usually wake for the day any time between 6-7am. We’ve had a few random 5am wakeups, but I wouldn’t be surprised if they were teething related. Sometimes he goes back to sleep on his own, sometimes he goes back to sleep with some help from mom, and other times he’s just up…until I go to nurse him for the morning and he falls asleep ;) We still put him down awake, and he’s pretty good about falling asleep on his own with no crying. Alex still wears a wearable blanket (only for nighttime sleep) and for the most part, the change has gone very well.

Alex is in all 12 month clothes (including sleepers with feet) and I actually need to grab the 12-18 month bin of clothes because I wouldn’t be surprised if we need some of them soon. He’s still in size 3 diapers, and wearing size 3 overnight diapers from Pampers. 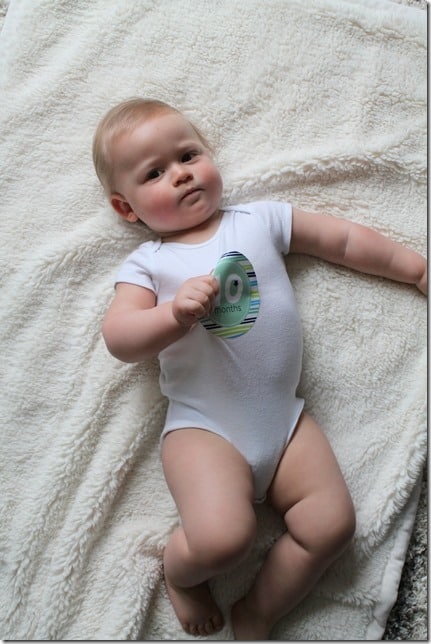 This little guy is developing quite the personality and it is SO fun to watch him! 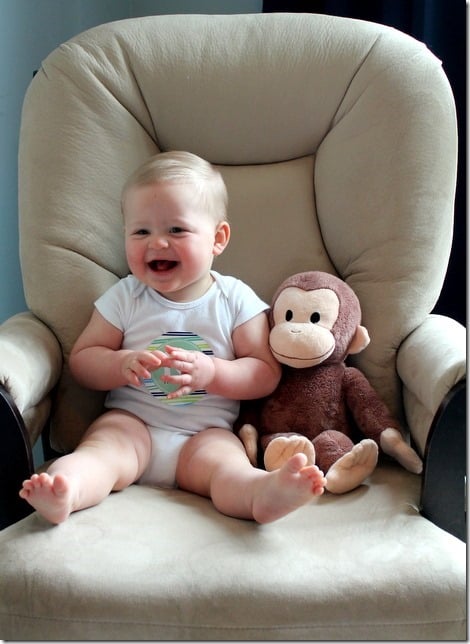 First, as far as new things go…we finally have some teeth! TWO, to be exact (a lower one in the front and, oddly enough, one of his eye teeth?!) and it looks like there are about 3-4 more that are right under the surface. Poor guy had some rough days with those, and I did end up buying an amber teething necklace after a few people highly recommended them. I have no idea if it was coincidence or not, but his mood definitely seemed to improve after wearing it for a few days (I take it off for bath and sleep). 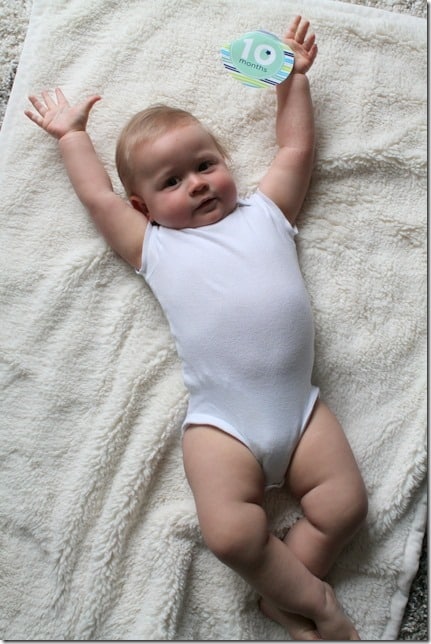 New this month, Alex has also started pulling up onto everything, walking along furniture, transferring from one piece of furniture/toy to the next, and will also stand on his own for a few seconds. He loves being on the move and trying to get into anything and everything he shouldn’t. 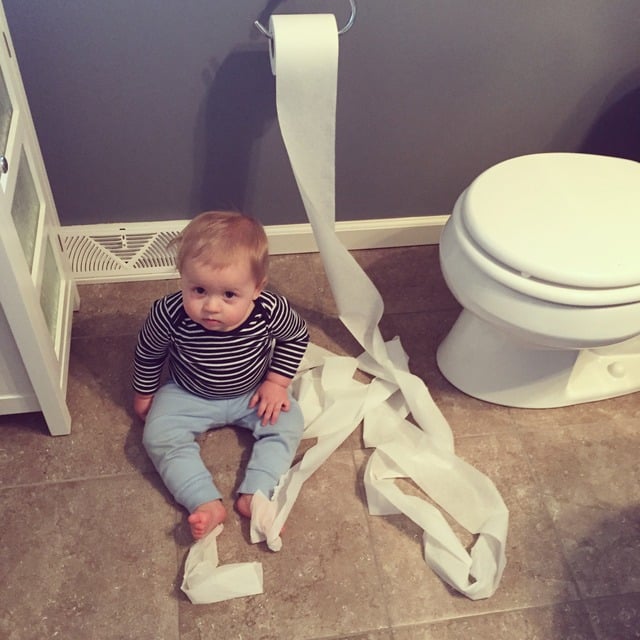 Alex will wave hi/bye either by flapping his arm like a wild man or doing the backwards hand wave. He loves giving kisses and trying to mimic whatever facial expressions you might be doing (sticking out the tongue is a favorite of his). He can get his toes when I ask him, but that’s the only body part we’ve mastered so far. ; )

He really is just a total ham. 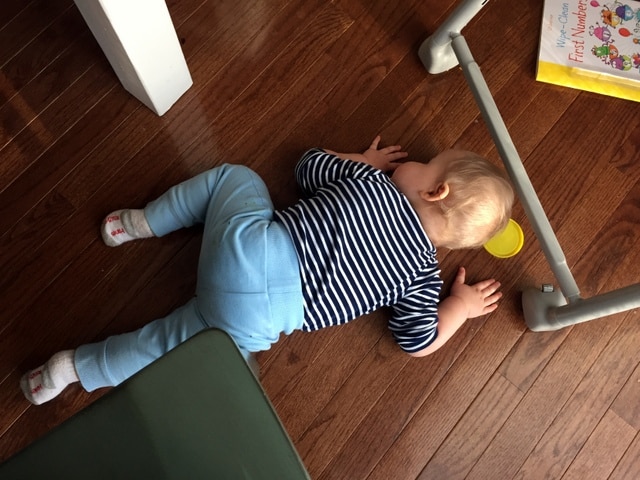 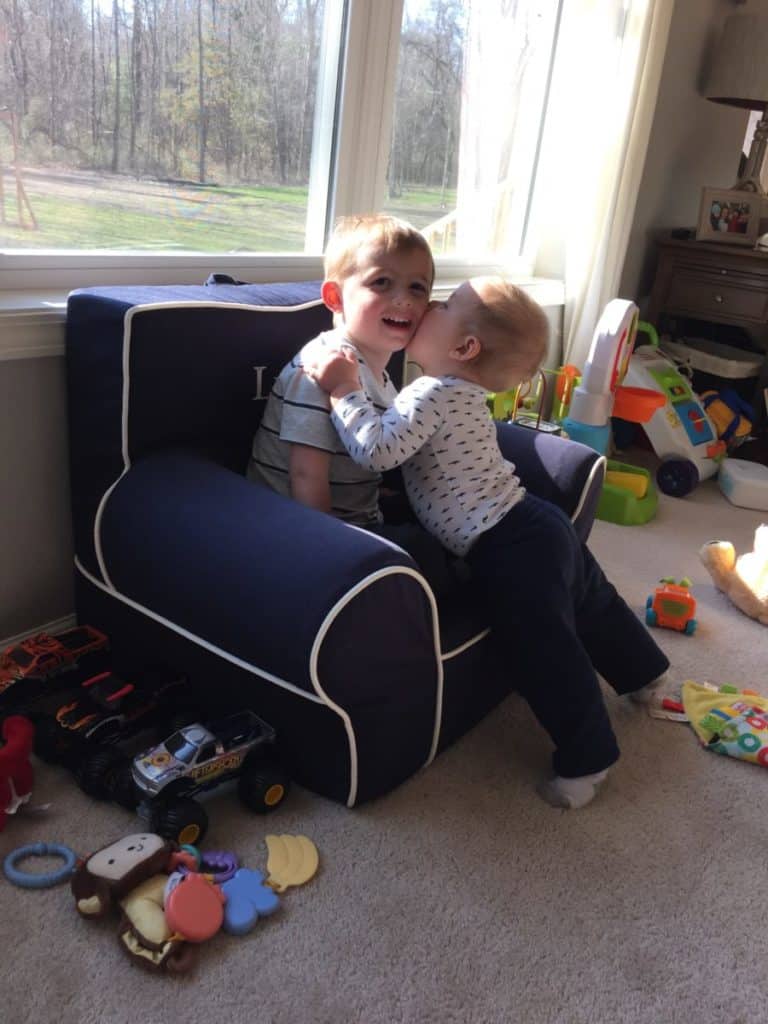 I shared a little bit more about how I’ve been feeling lately in this post from a few weeks ago. The feedback I received from that post was wonderful so, as always, thank you to all of you!

I’m sure it’s a mix of the weather getting nicer and us finally getting into a slightly more predictable routine, but I feel like I’m in a much better place right now in terms of parenting and being a mom than I was just a month ago. Alex is getting just a teeny bit more independent (I mean, as independent as a 10 month old can get) but thankfully, he doesn’t have to be attached to my hip 24/7. Because of this, I’ve actually been able to enjoy a few evenings/dinners out with friends without having to worry the whole time about what kind of trouble Alex was giving to whoever was left behind with him. It was (and still is, to an extent) an anxiety that I’ve struggled with, likely because he was just so, so tough in those first few months.

For the first time in these last 10 months, I actually don’t feel like I have an entire novel that I could write for this section. Sure, we have our struggles and our bad days, but I finally feel like I’ve made it over the hump. And wow, it’s such a great feeling to finally be back to that again.

Alex, you make me laugh and smile more and more every single day. <3