Here we are, two months in with two kiddos. And let me tell you…a LOT has changed since Alex’s one month update! 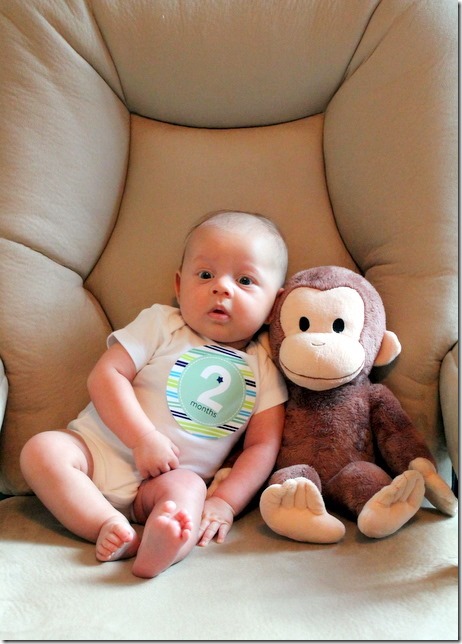 In Alex’s last update post, I made it no secret that things had been hard. I was having an incredibly tough time adjusting to having a needy toddler and a newborn who basically cried all day unless he was being held. This continued up until he was about six weeks old, and honestly, I felt like I was reaching my breaking point.

Everything just felt tense and I wound up arguing with Jay on more than one occasion. Truth was, I was finding myself extremely envious of the fact that he was able to get up and leave the house everyday to go to work, just like everything used to be. I felt like very little changed for him, yet here I was with my world completely rocked and turned upside down. There were days when all I wanted to do was just bolt out the door immediately after he came home so I could just have a little reprieve. But when you’re nursing (sometimes every 1-2 hours at that point), that’s not really all that possible.

There were many days where I found myself looking down and saying “thank goodness you’re cute” to this little face in those few weeks. 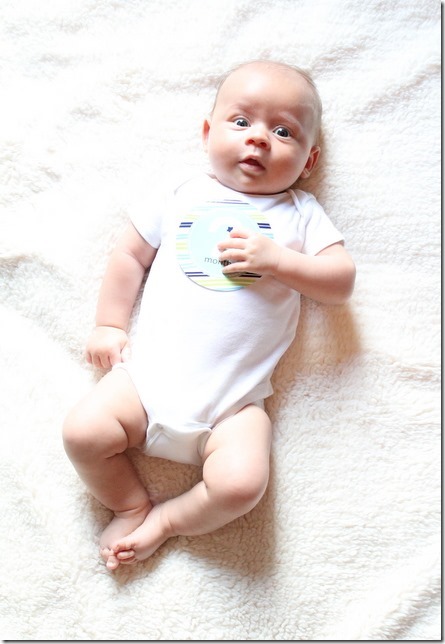 Then, it was right on Lucas’s birthday when something changed. It was like Alex finally realized that being in the real world wasn’t all that bad and he became a totally different baby. The timing was impeccable (partly because it was Lucas’s birthday and we had planned on being out for the morning with him), and from then on, things have definitely been easier. 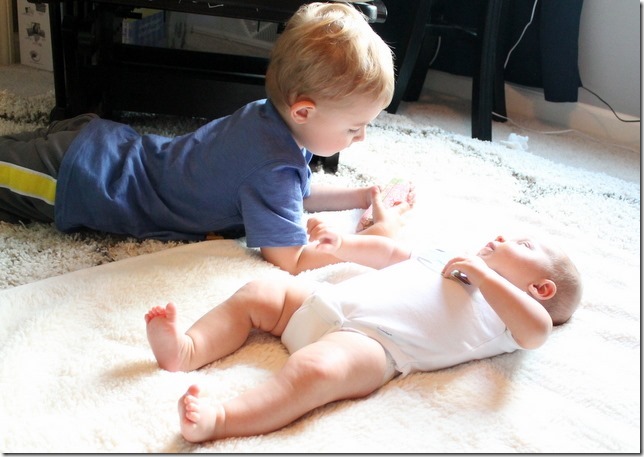 That isn’t to say everything has been easy though; we certainly have our struggles and challenges. But the fact that we can make it through most days with minimal crying (unless we’re in the car…ay yi yi) is a truly wonderful thing! 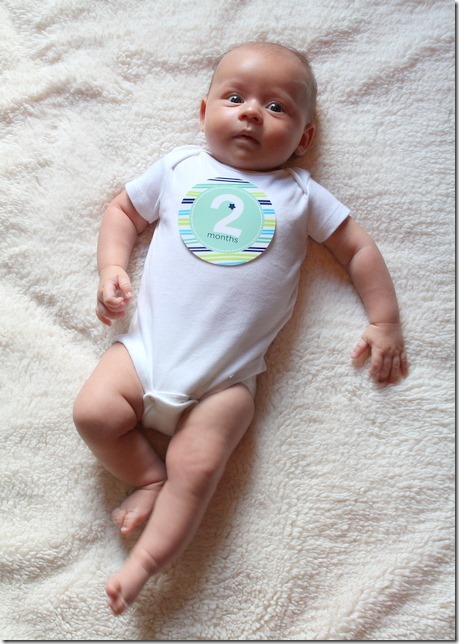 So now, here’s a little bit more about our chunkamonk!

At his appointment last week, he was up to 13lbs 3oz and measured 24.5 inches long, putting him in the 90th percentile all around. All of the nurses were loving on him and everyone assured me that it looked like he was a good eater…which he is! 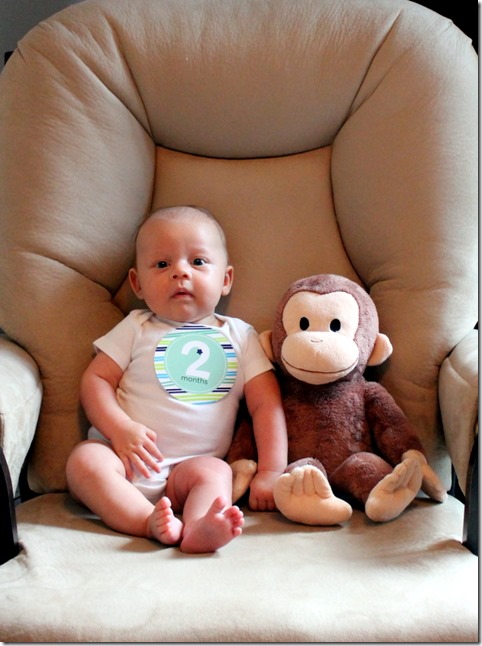 During the day, Alex will nurse about every 2 to 4 hours, depending on where his naps fall. He’s still a very efficient eater and we’re usually done with our nursing sessions in about 10-15 minutes.

Even still, at about 6 weeks, I was getting to the point where I wanted to give up breastfeeding all together. Alex was miserable, I was miserable, Lucas was miserable. I just felt like it was one more thing I was worried about, and I had convinced myself that it was something I was eating that was causing Alex to be so fussy. I also introduced the Gerber Soothe Colic Drops to see if they would help, after seeing so many of you recommend them and looking into them a bit more. I’m not sure if it was timing or what, but we definitely saw an improvement in him after taking the drops for a few days.

So at about the same time I wanted to give up nursing, we decided to introduce one bottle of formula a day, around 6pm. He never seemed quite satisfied in the evening and always wanted to be eating. It was really becoming a struggle for him and me, and I felt like I never had enough to offer him, so to speak. So Jay and I talked about it and we decided to try introducing the bottle of formula to see how he’d do. Since then, most of our evenings have improved SO much! We’re using Enfamil Gentlease and he has tolerated it very well with no issues. 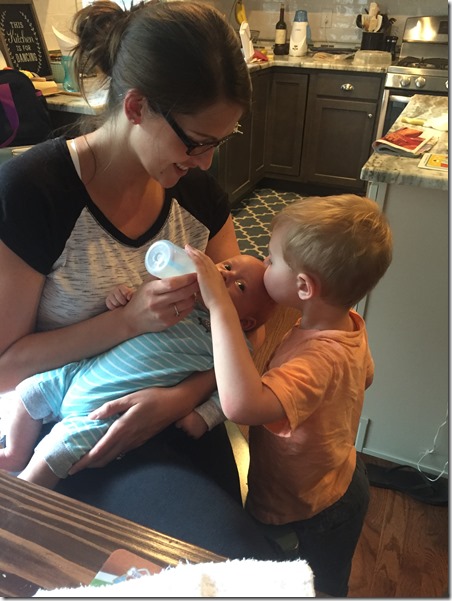 I hesitated a bit since I didn’t introduce formula to supplement with Lucas until much later (I’ve never had an overly abundant milk supply) and felt guilty about it. But I quickly realized I was putting just wayyyy too much pressure on myself and needed to do what was best for all of us. Since then, it has felt like a weight has been lifted!

Now I don’t have to worry if I need to be gone for some reason (which has yet to happen, but still) and we don’t have any extra milk on hand. And honestly, if it works out where we wind up needing to introduce another formula bottle during the day at some point sooner rather than later, I’m totally okay with it. As long as he’s happy and healthy (and I’m staying sane), that’s what matters. 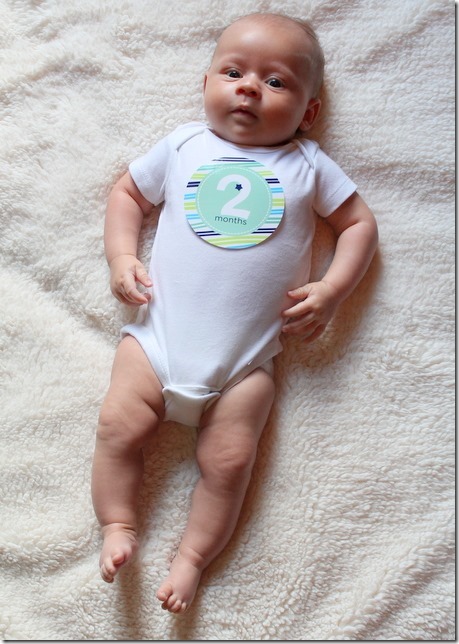 I still try to loosely follow the schedule from Moms on Call, but mostly focus on sticking with an eat/play/sleep routine and making sure that his awake times during the day are somewhere between 60-90 minutes. I had completely forgotten about this with Lucas, but he was the same way, and as long as we get him down for a nap within that window of time, he tends to sleep so much better. For the last week or so, he usually takes about a 1 to 1-1/2 hour nap in the morning, a 2-1/2 to 3 hour nap in the afternoon (at the same time as Lucas…hallelujah!) and a very short cat nap (maybe 30-40 minutes?) in the evening (although naps today as I’m typing up this update are definitely not going too well…ha!). We do some naps in the crib and some in the rock n play.

Around 7-1/2 weeks, I adjusted Alex’s bedtime from about 9pm to be closer to 7:30pm. That evening time had been getting fairly fussy for him, so I figured it’d be best for all of us to get him down sooner. So now, Alex usually gets his bedtime feeding anywhere between 7 and 7:15pm and is down for bed in his crib and swaddled around 7:30-7:45pm. For a couple of weeks, he’d been waking up anywhere between 5-6am to eat, and then went back down until about 9-10am. For the past week or so, he sleeps from about 8:30pm – 7:45am, which is amazing, but has struggled a little in the first 30-60 minutes of going down at night. Overall, he’s really great with sleeping at night, so we’re super thankful for that (since we know it could change at any time!). 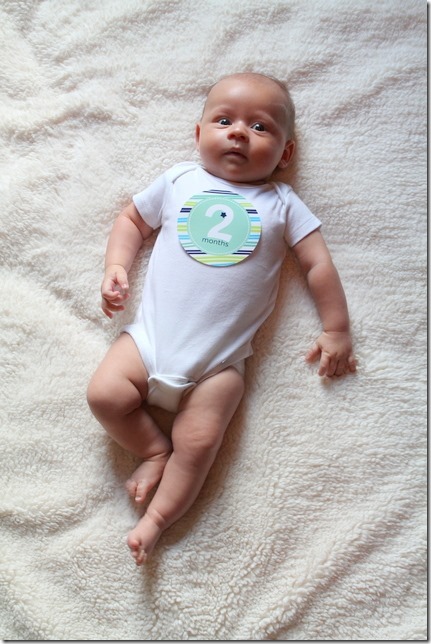 Mostly 3 month and 3-6 month outfits, although he has some sleepers that are size 6 month that fit him pretty well (some of his 3 month sleepers are getting short already?!). He’s also in size 1 diapers, but I feel like size 2 may not be too far away.

Eating, cooing, smiling, baths (a big change from last month!), his playmat, his piano, his swing, his big brother (it’s so sweet) 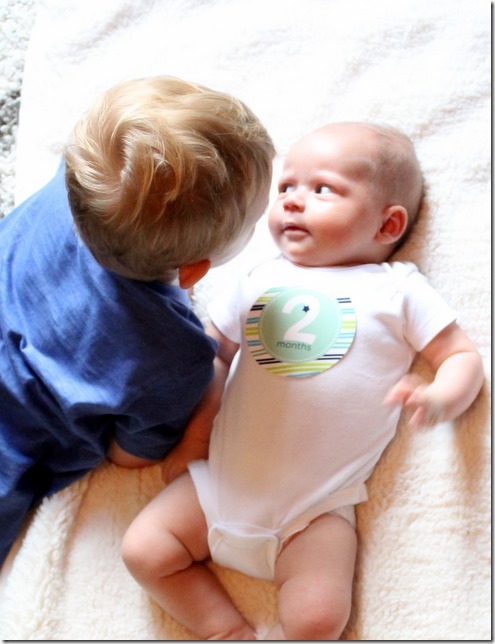 Being overtired, tummy time for longer than about 2 minutes, most car rides, taking a paci (ohhhh, how I wish he’d at least take one in the car!)

I think I pretty much covered a lot of it above but, thankfully, I’m feeling better. At my six week check up appointment, as soon as my doctor (who I LOVE) asked how I was doing, I immediately broke down in tears (all while Alex was in the room with me…crying). She kindly offered to have the nurses take him while we could chat, and she really did make me feel a lot better about things.

I still have days where I’m more emotional or sad than others. Sometimes I find myself feeling very alone and craving more of the outside world; I take blame for this, since it’s not like we’re locked inside the house or anything. But I’m still working on finding the balance with being out in public with a (potty training) toddler full of energy and an infant who does 100x better when he’s home and in his routine, as opposed to being out in the car/car seat/etc. I know I’ll get there, it’ll just take some more time.

Physically, it was probably around the 5 week mark when I started to feel like I didn’t need to take pain meds every day and felt much more normal. I wouldn’t say everything feels 100% just yet (I actually have incredibly sore hips these days) and I honestly doubt if it ever will?

In terms of weight, I’m probably about 7 pounds away from my pre-pregnancy weight, but I also held on to a few extra pounds until I stopped nursing Lucas too, so who knows. I am back to exercising regularly which feels great, but it’s not like I’m really doing anything to worry about losing any weight right now (I’m lookin’ at you, ice cream) because it’s not a top priority. My exercise is my sanity saver many days!

Overall, I feel like I’ve got an okay grip on things and we’re still just very much in an adjustment period. I know it will only get easier as time goes on, so I’m just trying to give myself grace and take the tough moments/days one at a time. Fellow mamas out there, I’m sure you know what I mean?

Well I think that covers just about everything. Whew, these are long! Thanks for stickin’ with me, if you’re still reading.

*And just for fun, here’s a look at Lucas’s 2 month update; Alex already has about a pound and a half on his big brother at this point!

« You Will Want to Join This Party!
No Bake Peanut Butter Granola Bars »