Our little man turned three whole months this past Saturday! Time sure flies! 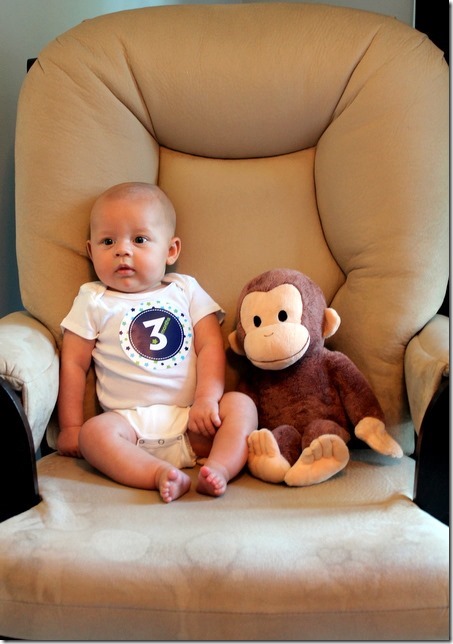 Let’s chat about how much our sweet little Alex is growing and what he’s up to.

And for fun, here’s a look at Lucas’s 3 Month Update!

According to my very formal methods of weighing him (aka I put myself on the scale, then I add him with me), he was up to about 15lbs. I haven’t had the chance to see how long he’s getting, but I know he’s definitely growing since we’re already growing out of some 3 month clothes! 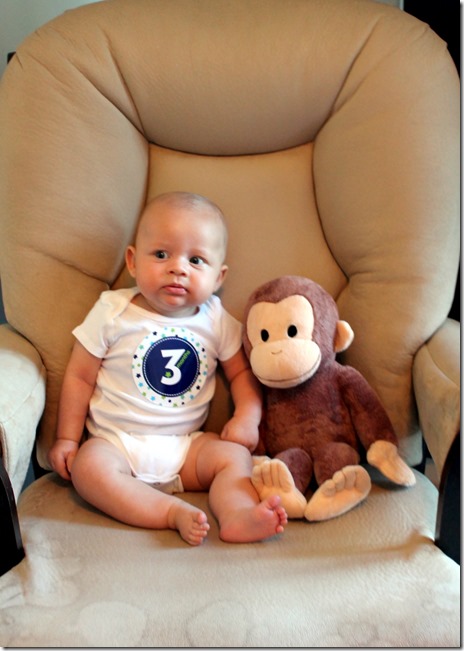 During the day, Alex will still nurse about every 2 to 4 hours, depending on where his naps fall. He’s still a very efficient eater and we’re usually done with our nursing sessions in about 10-15 minutes. When he’s at daycare, he’s been getting a bottle of my breastmilk about every 3 hours, which has anywhere between 4-5 ounces in it (just like with Lucas, I send whatever I pumped the day before).

We’re still currently giving him one bottle of formula at night, but the timing of when he gets it has shifted a bit throughout this month (we’re still using Enfamil Gentlease). We had previously been giving it to him around dinner time, but then that feeding was getting really close to his bedtime feeding, so we started doing the bottle at bedtime and then I’d top him off with a little breastmilk (I think the child would eat all day long if I let him!). 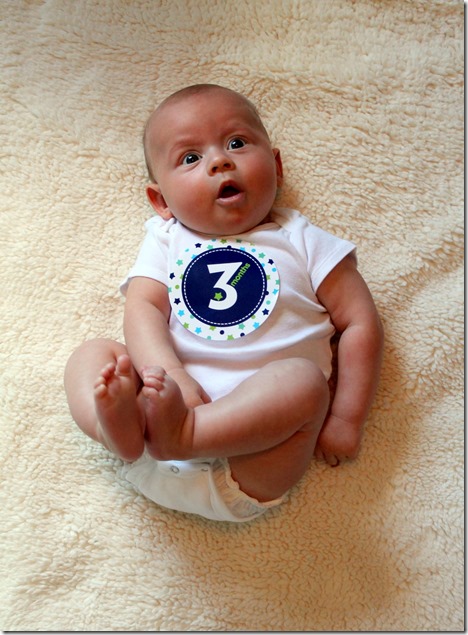 Now we’re actually attempting to see how he does without it entirely (unless it’s needed for any particular feeding for any reason), partly due to what I’ll mention below under the SLEEP category…

Alex’s naps are…all over the place! Some days he’s a catnapper and wants to nap for 30-40 minutes at a time. Other days, he’ll take a 3+ hour nap where I need to wake him up. At first I was really letting it bug me (because…schedules!) but I’ve just sort of given up and we’re going with the flow. I’m sure we’ll get there eventually as he gets older. There are many days where he’ll wind up taking a short nap in the Ergo somewhere in the evening, too, so it’s nice that he’s able to doze off in that so we can go outside or do whatever we’re doing with big brother. 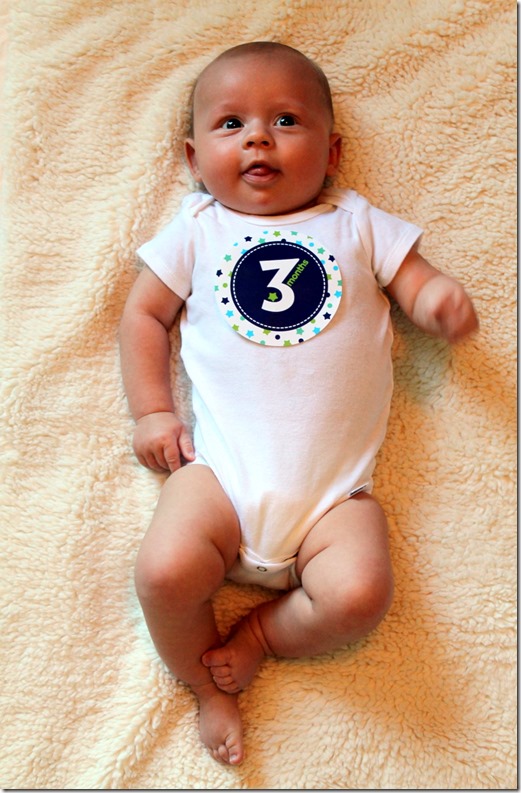 Hmmph. Well, let’s see. So I know I’ve mentioned a couple of times about the struggles we’ve been having with getting Alex to settle at night. It started out as him  just needing an extra rock or two, but over the past 5 weeks it’s gotten worse. Then slightly better…then worse again. There are many nights where Alex just won’t settle for anywhere from about 7-10pm and most of the evening is spent going back and forth to settle him, etc. He’s clearly tired, but it’s like there’s something going on that’s causing him to startle awake or just not be able to fully fall asleep.

I’ve tried earlier bedtimes, later bedtimes, making sure his last nap wasn’t too far away, feeding extra, feeding less, no swaddle, velcro swaddle, larger sized swaddle…I’ve tried not rocking him to sleep and letting him settle on his own, I’ve tried rocking him to sleep until I think he’s completely passed out…you name it, I’m pretty sure we’ve tried it. And in the end, it all just boils down to the fact that…THIS IS BABY SLEEP.

As my dear friend Chelsey reminded me yesterday, babies will be babies. I can Google search until my little heart’s content (trust me, I have) to figure out what the heck is going on, but in the end, this is (hopefully) just a phase and before we know it, we’ll be on to dealing with something new. I just always find it so frustrating when I don’t have a solid answer for something, you know? Like, OH he’s in a Wonder Week? Okay, makes sense! Or, OH he’s teething! I can’t attribute it all to anything at this point so it just is what it is. 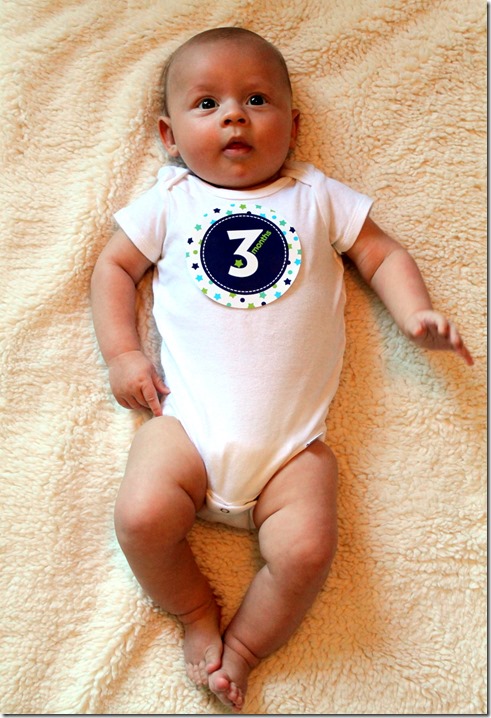 The thing is, once the finally DOES fall asleep, he’ll typically sleep until about 7ish the next morning (with the occasional days he’ll randomly wake up at 5am then usually sleep until 9am). So really, I cant complain all that much because I totally get it could be so. much. worse. It’s just frustrating because that timeframe (7-10pm) is usually when we try to get everything else done (like clean up, dishes, blogging, Usborne Books stuff) and also when we need to get Lucas to bed time. Never mind the fact that I still like to try and get a few minutes to catch up with the husband! I feel so behind on everything which just leaves me feeling totally off and anxious. But right now, if Alex needs be during those times, then he’s my top priority and that’s just how it goes. The other stuff will have to wait.

I realize even as I’m typing all this now that it’s probably coming across rather intense, and that’s likely because we’ve really had a few rough nights and I’m low on sleep. So you’ll have to forgive me.

I’d say that hopefully I’ll have better news for his next update, but that will put us at 4 months and know what that means (dun dun dunnnn…sleep regression).

Some 3 month and 3-6 month outfits, most of his sleepers are now size 6 month. He’s also upgraded to size 2 diapers(!). 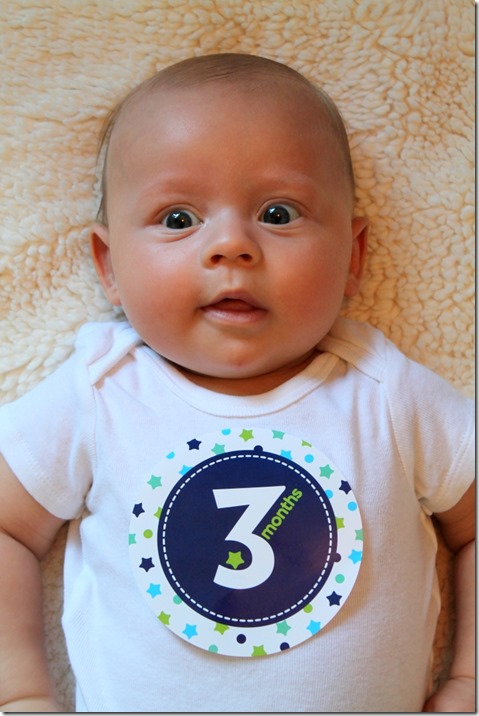 Eating, being held (facing out so he can see the world!), chewing his hands, cooing/talking, smiling, his big brother, baths, having his hands/palms rubbed (calms him down probably 8 out of 10 times, so random!), his playmat. Alex has a personality very much like his brother did when he was a baby; when he’s happy, he’s over the moon happy and full of smiles. When he’s not happy, he lets you know it in a big way.

Being overtired, tummy time for longer than about 2 minutes, most car rides (although he has gotten better!), taking a paci

Honestly, it depends on the day. Some days, I’m totally good and go with the flow. Other days, I have shorter patience or just feel sort of…down. Defeated might also be another way to describe it?

Having a strong-willed three year old and an infant at the same time is just not easy. At least not in my house! And there are often times when in find myself wishing I could fast-forward through some of these days, when I know I should really be embracing them. But sometimes, it’s just freakin’ hard to embrace the moments where my toddler is throwing a tantrum or not listening to a word I say while his little brother is screaming in my ear because he only napped for 20 minutes. Ya know?!

Compared to Lucas, Alex can be a tough baby. He doesn’t do well outside of a “routine,” and unfortunately (fortunately?) he’s most often able to get the most calm when he’s with his mama. On the one hand, that almost makes me feel like I have super powers…like, “hey, look at me! I can keep him happy(ish) because I’m his mom!” But then there are other times, like when I’m 2+ hours in with rocking him or getting him to stop fighting sleep at night where I don’t want to be the only one that makes him calm.

Most days are crazy and chaotic and it’s the kind of chaos that I’m learning to embrace because, well, it’s not going to be going away anytime soon! 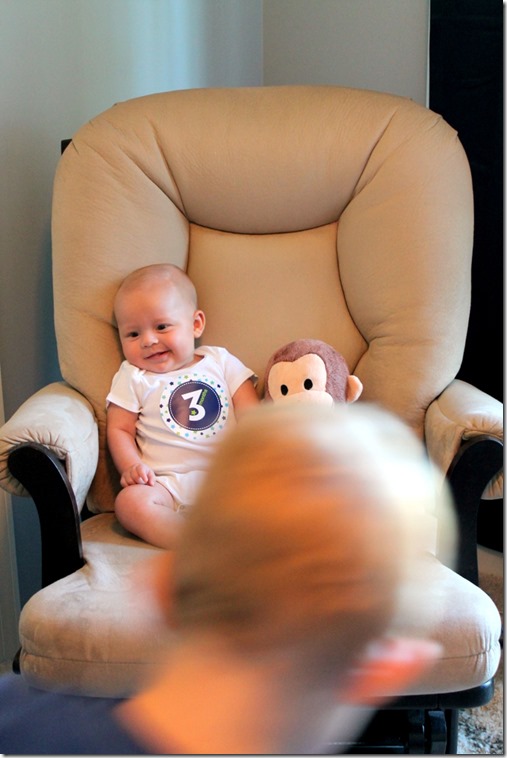 I’m also feeling a bit more emotional and guilty this month with all of the transitions we’ve had. Thankfully, they’ve been pretty good for the most part. Alex and Lucas are doing well at their daycare, and Lucas also really seems to love his preschool so far which is wonderful.

Honestly, I know how incredibly lucky I am to have these two amazing little boys in my life and to be able to have them call me mom. They are true blessings, and as much as they make me crazy sometimes, they’ve also shown me a love that runs deeper than I could have ever imagined. I know I tend to spill my emotions quite a bit on here, so hopefully nobody takes that as a sign of me being ungrateful for what I have. Because how could I not be anything BUT grateful for these two? 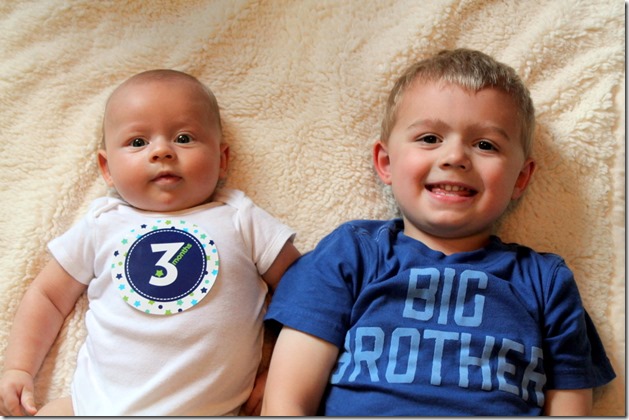 But even still, that doesn’t mean it’s not hard. Because it is hard! But we’re getting there. I know it will only get easier with time and before I know it, I’ll be writing Alex’s 1 year post and we’ll be in a completely different place! Hopefully.