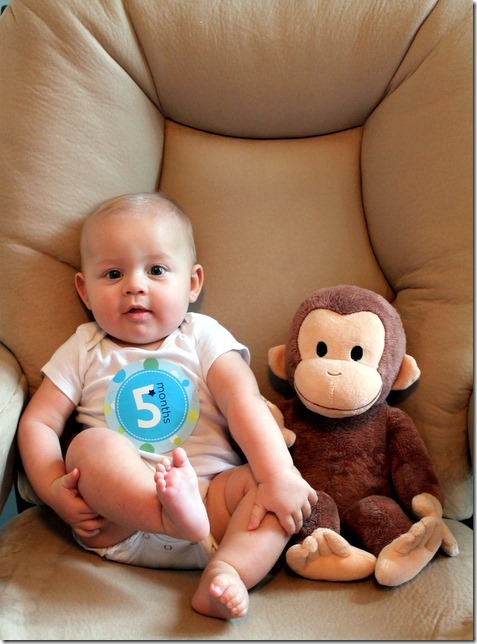 Just for Fun: Here’s a look at Lucas at 5 months!

After a quick doctor’s visit on Tuesday thanks to a nasty cough our little guy has (thankfully his lungs are clear!) he is officially weighing in at 16lbs 13oz (I was totally off on his last month’s update). And I swear he’s getting bigger by the minute – especially those cheeks! Not sure on the height…we’ll get that at his next appointment. 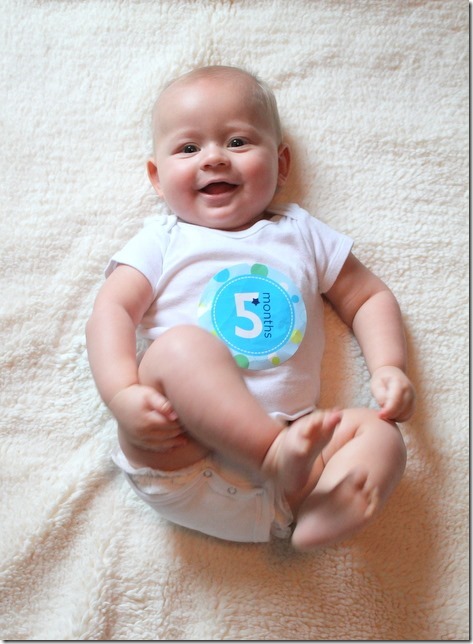 Alex loves to nurse! He still averages about every 3-4 hours during the day, depending on how long his naps are. Most of the time, he still likes to eat once a night, although there have been a few nights where he’s slept (WAHOO!) and hasn’t had a feeding.

We also started some solids with him just recently! So far we’ve done rice cereal mixed with a little breastmilk, and he’s pretty much indifferent about that one. We’ve also done avocado, then banana, and just tried prunes (because I think he’s a bit backed up…) and he has loved all of those! He’s SUPER interested in anything anyone else is eating though, and it’s so funny to watch him stare you down. 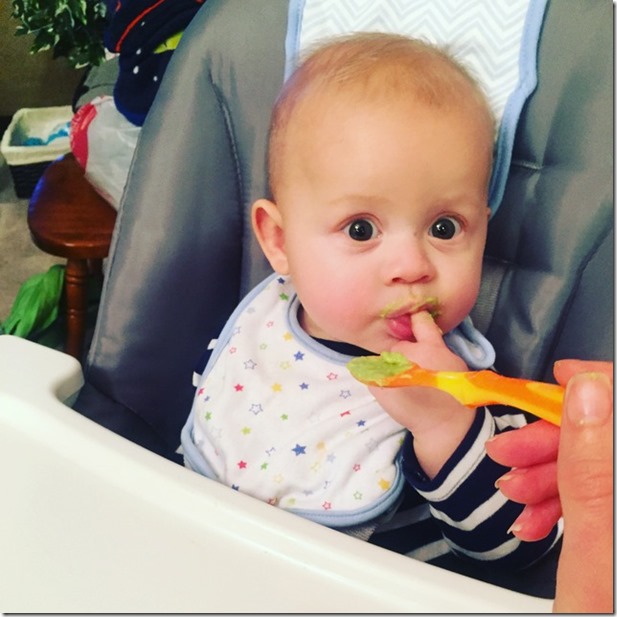 I felt like we were slowwwwwly starting to get a little bit more of a predictable schedule with these, but then for the past two days his naps have been HORRIBLE. Ay yi yi! Most days, Alex takes three naps and they can last anywhere between 30 minutes to 2-1/2 hours. He’s usually ready for his first nap around 9am (assuming he woke up at 7am like he usually does). His second nap usually happens about 2 hours after he woke from his first nap (anywhere between 11-1, depending on how long he napped), and the same goes for his third nap (usually somewhere between 3-4pm). I try not to let him nap past 5pm so it doesn’t screw up his bedtime. He’s currently unswaddled for naps with a blanket in the Rock ‘n’ Play. We’ll be working on getting all of them happening in the crib this month… 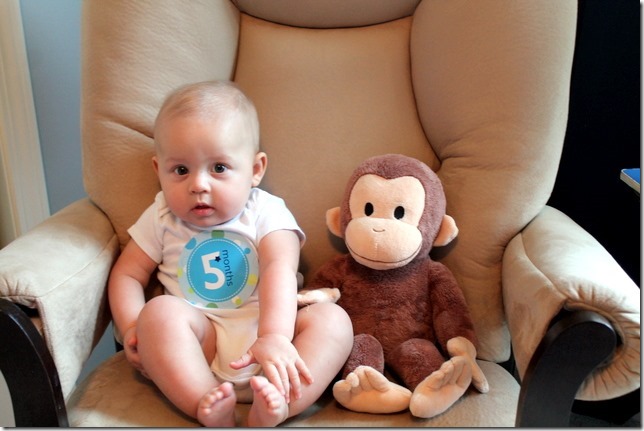 He looks thrilled about it, doesn’t he?

The night before typing this up, Alex slept from 7pm – 7am, and it was the first time he’d done that in a LONG time. Most nights, we still never know what we’re going to get, although he does seem to have gotten into a pattern lately where either Friday night or Saturday night are just awful sleeping nights for him (Edited to add…this weekend, it was Sunday). Who knows why?! 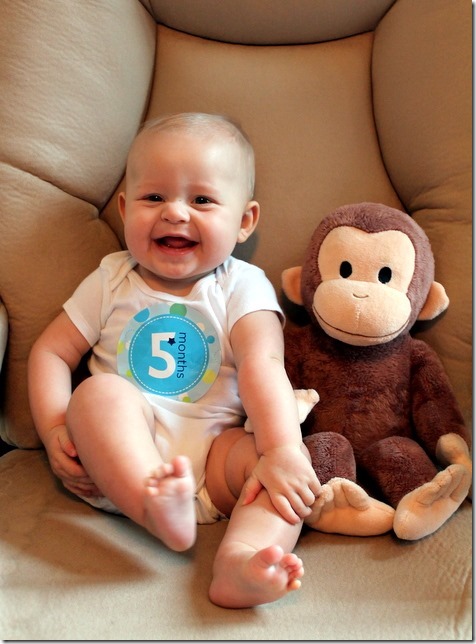 Lately, he’ll fall asleep right away and will be good for maybe an hour or two before waking and needing to be rocked back to sleep. Other nights, he’ll sleep fine until he wakes up once to eat in the middle of the night (could be anywhere between 1-4am). If he wakes earlier, I try not to feed him unless he’s totally grumpy.

This past month, we also started using the Baby Merlin Magic Sleepsuit at bedtime. We had been doing the one arm out swaddle in the crib, but he’d often start smacking himself in the face and would wake up. We’ve had the sleepsuit since when Lucas was a baby but we only used it for about an hour with him! I’m so glad we decided to break it out for Alex because it really does seem to have helped a bit, and I’m hoping it will make for an easier transition to something like a sleep sack. 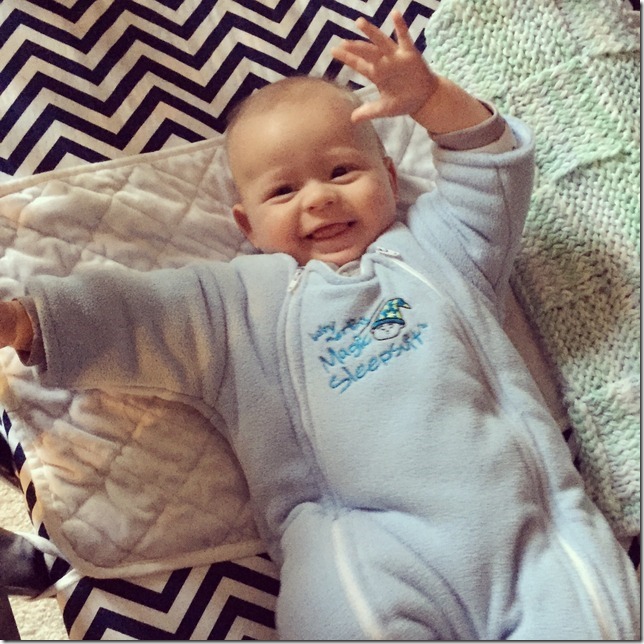 Alex is still rocked to sleep, and usually falls asleep within 5-10 minutes. He also only wants mommy to do bedtime, even though he’s fine with daddy any other time. We’ve tried having Jay do it, but Alex just doesn’t settle well for him. What is it about that mommy touch?!

We’ll likely work on putting him down awake at some point this month, which will likely require a little sleep training. We did the same thing with Lucas around this age, but I’m nervous about Alex just because he’s so much more unpredictable than Lucas was! So we’ll see what happens there…wish us luck!

All 6 month clothes at this point, with some 6-9 month pieces trickling in. He wears size 2 diapers during the day and size 3 diapers at bedtime, although we’ll likely be sticking with size 3’s from here on out once we run out of our current box of 2’s.

Alex is becoming a much happier baby with each passing day. Looking back at the way he was from months 1-3, it’s like he’s almost an entirely different baby. He loves smiling (saving his biggest smiles for his big brother), grabbing anything within his reach, and has just recently started giving a few kisses here and there. He’s pretty good around strangers and loves be held by his grandmas and his papa! 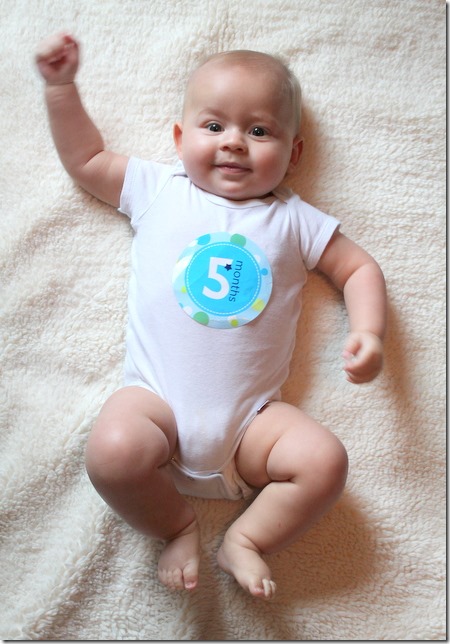 Alex has started to roll a little more consistently from back to tummy, but rarely makes it back over from tummy to back if he managed to make the full roll. He also loves to stand any chance he can get! He’s started to show a little stability with being able to sit up, but he’s not quite there yet. And, of course, we also started new food this month, too!

His big brother, anything he can put in his mouth, Sophie the Giraffe, reading/grabbing books, being sung to, grabbing at faces, splashing in the tub, having his face traced with my finger (it looks like it almost gives him the chills when I do it and he gives the cutest smile), sucking on his hands/fingers/toes allllll the time. 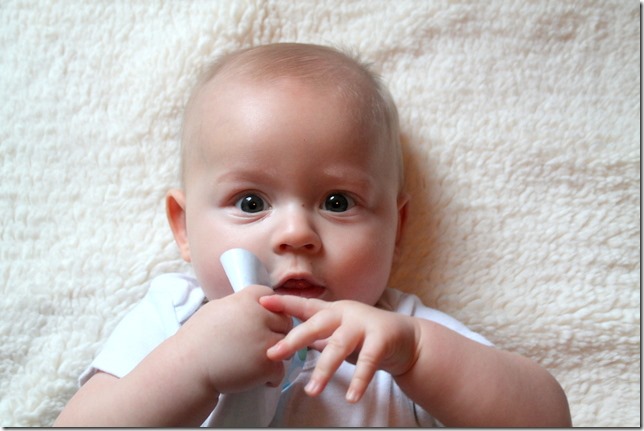 Being in his car seat for too long, getting stuck on his tummy after rolling, pacifiers, his jumper for more than about 5-10 minutes, being overtired.

I feel like I’m getting better, most days. I’ve noticed that my mood and outlook 100% correlates to how Alex is sleeping…on the days he’s not napping well or the nights he’s up all evening when I’m trying to get work done, I really start to feel down and like I’m getting behind on everything (because those are the times I’m trying to get everything done). But on the days he DOES sleep well, and in turn, I’m able to get things done…well, those days I feel like I’m totally winning at life!

And just the fact that he’s becoming a much HAPPIER baby really just makes a world of difference. Jay and I were joking the other day (I’m sure someone will get offended by this, but I’m writing it anyway) that he’s actually likeable now! Of COURSE we love him with all our hearts, so don’t take that the wrong way. But honestly, there were many days in his first couple of months when all he’d do was cry and well, it just wasn’t fun! But we’re making progress and it’s just making the whole family dynamic that much better, too.

I find myself drawn to the many, many different blog posts and articles and news stories that people are sharing all over social media about “this hard phase of life.” It makes me feel better seeing so many other people sharing them, because every time I see that, it reminds me that I’m not the only one feeling like I’m losing my mind.

I will say though…those of you who have been telling me that it just keeps getting easier? You’re right. It does! And on the tougher days, I remind myself of that a little bit more. You know…the days like yesterday, when Alex wouldn’t nap for more than 20 minutes at a time and would then fall asleep while nursing so I was stuck to the couch trying to type for work on my laptop with one finger…and when I left Alex at home with Jay to pick up Lucas from daycare to try and have a little nice, one on one time…only to have him whine, and whine, and whine, and be a total grumpster, and have a mini meltdown while racing through the grocery store because I wouldn’t buy him cupcakes from the bakery.

Yes, those are the days I remind myself a little more often that I’m not the only one down in the trenches right now.

I’ve learned to cut myself some slack in different areas and that has certainly helped lift some burdens. I know there will be a day when I’ll be able to get everything done again!

I could go into more detail (like usual!) but I’ll just keep it semi-short and sweet this time around. Mommy is good, and getting better and better!

My little Alex, you are just such a little character and we love you to pieces! <3