Half of an entire year old. WOW. 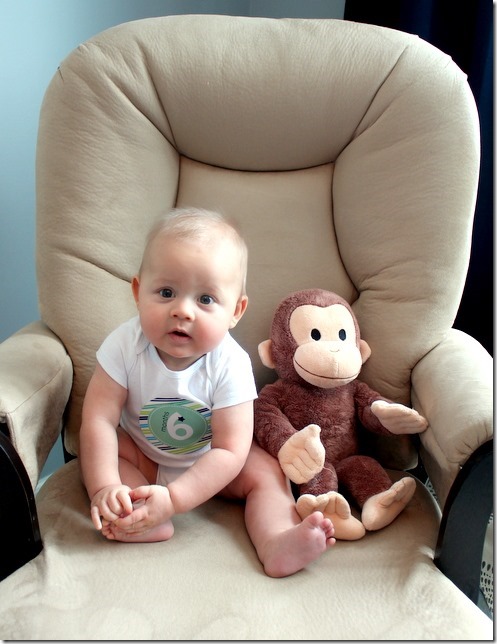 When I look back on these last six months, it equally feels like an eternity has passed since Alex arrived, while also feeling like six of the longest months of my life. I can’t believe we’re already here! Our little Alex has become such a different baby than he was for the first 3-4 months of his life, and he’s just SUCH a joy!

Just for Fun: Here’s a look at Lucas at 6 months!

Not totally sure just yet. He has his 6 month appointment next week, but I’d have to guess that he must be close to 18lbs by this point… 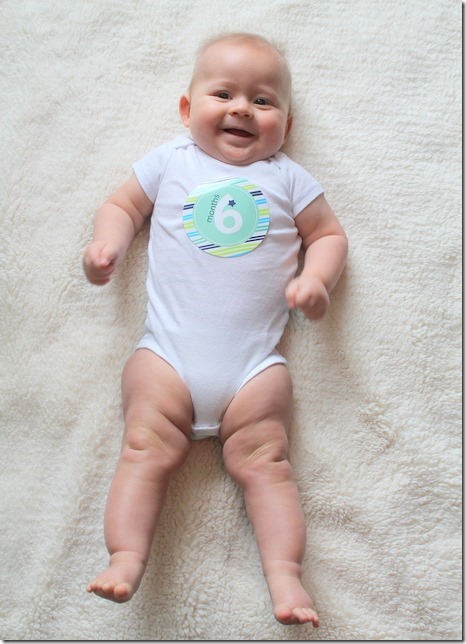 Alex knows how to chow, if you couldn’t already tell. This past month, we’ve officially gotten into more solids; at first, I started with just dinner, then it was breakfast and dinner, and for about a week now, we’ve moved to 3 meals a day because he just wants to eat(!). On top of his solids, he also still nurses every 3-4 hours during the day (or gets bottles on the days he’s at daycare) and also gets one bottle of formula at bedtime.

As for solids, we’ve been having some fun with a few different varieties! I haven’t had the chance to make any of my own baby food this time around, and although I’m planning on doing some, I know I likely won’t be able to do as much as I did for Lucas (second child probs). We started with rice cereal mixed with breastmilk, but he didn’t totally love it. So I added in some unsweetened applesauce to it and that did the trick – he LOVES it now! Along with that, we’ve also tried the following (in order, I think…):

The only food that Alex doesn’t really seem to enjoy too much is peaches; other than that, he loves it all! 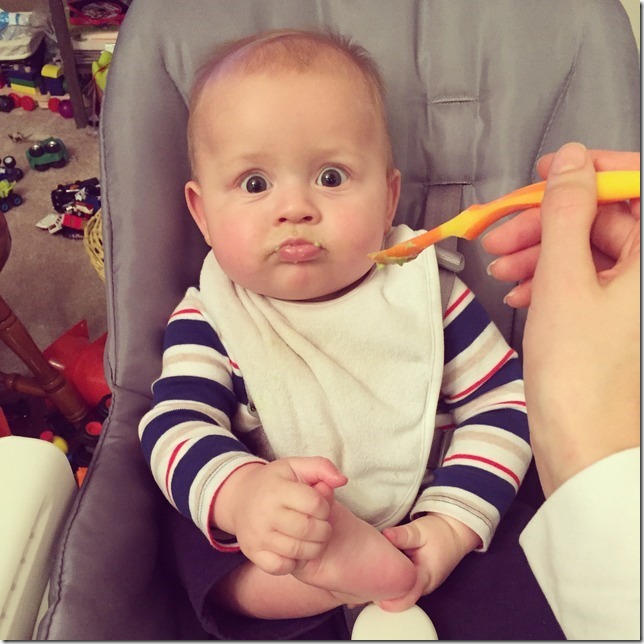 Not too bad! I feel like we’re FINALLY getting into somewhat more of a predictable pattern with naps, although the actual times that they happen will still vary depending on when he wakes up from the last one. But for the most part, his first nap is typically 1-1/2 to 2 hours after waking in the morning and can last anywhere from 1 to 2-1/2 hours long. His second nap will typically happen about 2 hours after waking from his first and is usually around 45 – 90 minutes long.

Both his first and second naps take place in the crib with no swaddle, only a blanket. I give him a paci that he’ll usually play with for a little bit but he never keeps it in his mouth. And (for the most part) I put him down awake and he’ll fall asleep within a few minutes, usually with no crying.

His third nap can be a little tricky since it will often need to happen either when I’m picking him up from daycare or when I need to go pick Lucas up from daycare. So most days, I’ll usually wind up nursing him to sleep on the couch and he’ll take a little catnap that can last anywhere from 10-30 minutes long. It wasn’t a habit that I wanted to get into, but it just works with our daily routine right now! 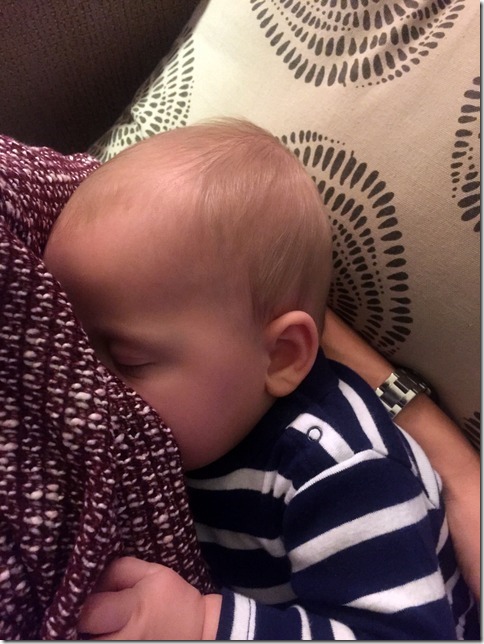 We’re getting better!!! Somehow over the past couple of weeks we got to the point where I can put him down awake and he’ll put himself to sleep without any crying. And he stays asleep (95% of the time).

There was a random night where he just couldn’t seem to get comfortable while I was rocking him to sleep like I usually did at that point, so I decided to just put him down in his crib (assuming I’d be back in within a few minutes). But he put himself right to sleep and it’s been that way ever since. Very rarely will he fuss, which I never thought would happen!

He sleeps in the Baby Merlin Magic Sleepsuit for nighttime sleep, although he’s getting pretty close to outgrowing the small size so I’m trying to decide if it’s worth upgrading to a large or just trying without it. Alex is usually in his crib anywhere between 7 – 7:15pm, and most nights, will wake up somewhere between 10-11pm. I can typically nurse him super quick on that wakeup and have him back in his crib, asleep, within about 15-20 minutes so I don’t mind that at all. Some nights he’ll also wake up around 2am and will nurse the same way he does earlier in the evening; I’m fairly certain I’m still half asleep for those feedings because I can hardly remember them! Other nights he’ll sleep through until the morning which is usually around 7-7:30am. Lately, we notice he’ll start to make some noise around 6am but winds up putting himself back to sleep (which is great!).

I really thought for sure we were going to have to start some sleep training with Alex at some point this past month, but with the way things have changed, we’re not worried about doing anything just yet. The only issue is that he doesn’t seem to have as smooth of a bedtime routine with anyone other than me, so we’ll see what happens in the month to come and play things by ear.

A mix of 6 month and 9 month clothes, depending on the brand and style. He’s also in size 3 diapers. 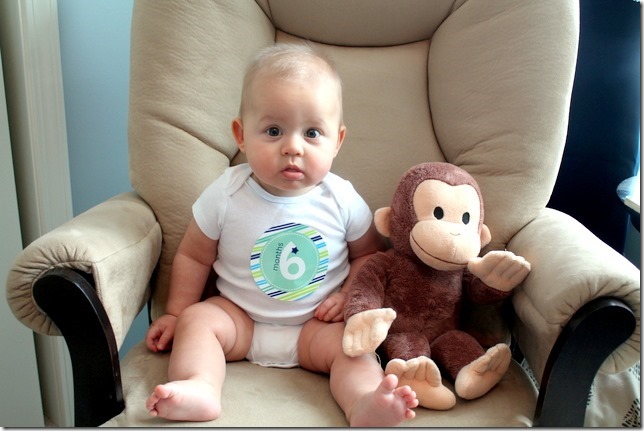 Alex continues to be a much happier baby every single day. It’s seriously amazing just how much has changed over the past few months! He’s full of smiles and has really started the most incredible little giggle when you tickle his armpits or under his chin/neck. He loves playing peek-a-boo, grabbing onto faces, watching his big brother, and has become just very interested in general in his surroundings.

Alex has really started sitting up! We noticed one random night that he seemed to have some good stability while sitting in front of us on the floor, and ever since, he’s been rocking the sitting like a champ. 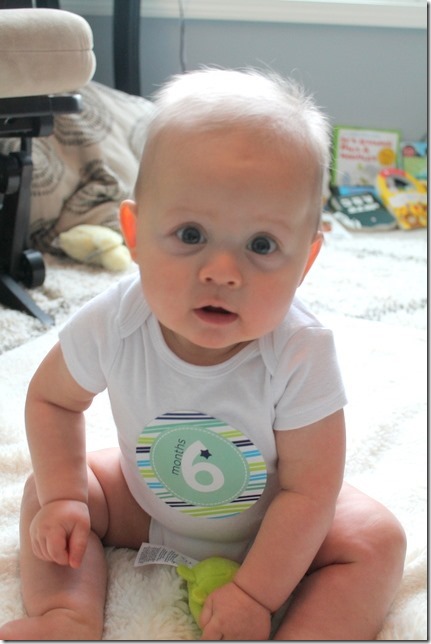 Of course, he still tips so we usually keep pillows nearby.

He’s also gotten much better at rolling from back to belly, and will often do it almost immediately when you put him down on his playmat/the floor. But he hasn’t quite mastered the belly to back roll so he gets angry after about five minutes and needs to be rolled back over. 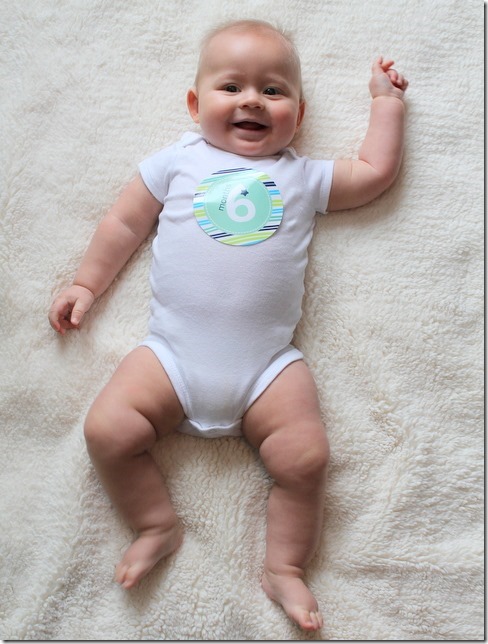 FOOD, his jumper, his PortaPlay, Sophie the Giraffe, reading books, being sung to, grabbing at faces, my purple cup, splashing in the tub, making funny noises, chewing on just about any toy you give him. 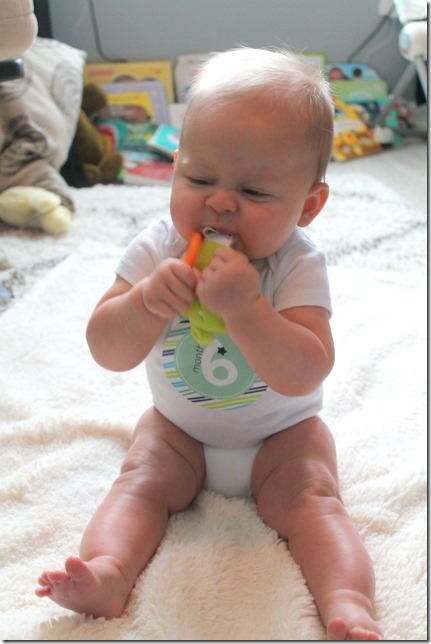 (Fun Fact: these dislikes are all exactly the same from Lucas’s 6 month post!) Being in his car seat for too long, sitting for too long in his highchair if he’s finished eating, being even the slightest bit overtired. When he’s tired, he’s tired, and needs his nap/sleep.

I’m planning on putting together a post on the first six months of being a mom of two, so I’ll keep this section of Alex’s post brief. But I will say that I’m doing better. Much better, actually. I feel like we’re finally starting to hit somewhat of a groove which, had you asked me a few months ago, I was convinced that it was never going to happen. This past weekend was just SO great to be able to be out of the house and not all consumed with anxiety the entire time (definitely still there though). I’ve noticed that my overall anxiety actually seems to be decreasing quite a bit; most evenings, I was a ball full of nerves just because I never knew what we were going to get with Alex’s sleep and that just really threw me for a loop.

Physically, my hair is still falling out at a ridiculous and disgusting pace, but I’m also starting to get the new hairs growing back in too, so hopefully the falling out will be nearing an end soon. I’m also pretty certain that I’m likely at the weight I’ll be at for a while until I either a) stop breastfeeding, b) stop making my food intake at least 80% carbs, or c) hit the gym harder. I have no desire to do c (I’m happily enjoying my 3-4 workouts per week!), and I know I do need to start making better food choices, but that’s not because of a “weight” thing or because I think I need to lose weight; that’s just because I know I wind up super sluggish and not feeling my best when I’m going heavy on the carbs. I have no problem where I’m at right now though, and am just trying to enjoy life without being obsessed over food. This is actually another post I want to write, too…one of these days!

But to summarize…I am doing much, much better. The days can be tough, but they can also be amazing, and funny, and full of smiles and laughter. And that just makes my heart happy.

Ohh, little Alex. You really do make our family complete! <3

« Getting a Little Closer
Movies Are Expensive »