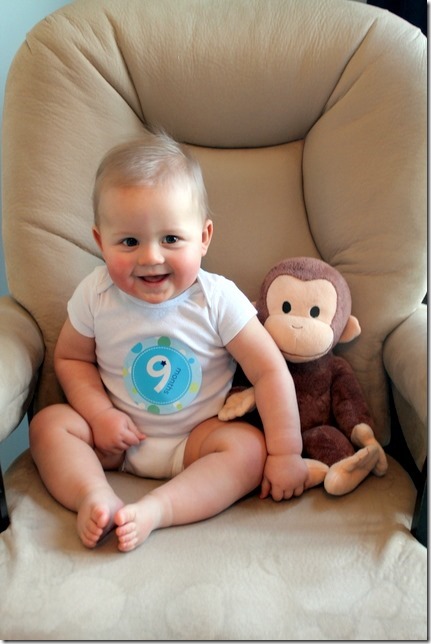 I still just can’t get over how FAST time is flying since this little guy has joined our little family. Some days, it feels like it was just yesterday we were bringing him home (and thinking, oh my god, we have two children…what are we doing?!).  ; )

JUST FOR FUN: HERE’S A LOOK AT LUCAS AT 9 MONTHS! 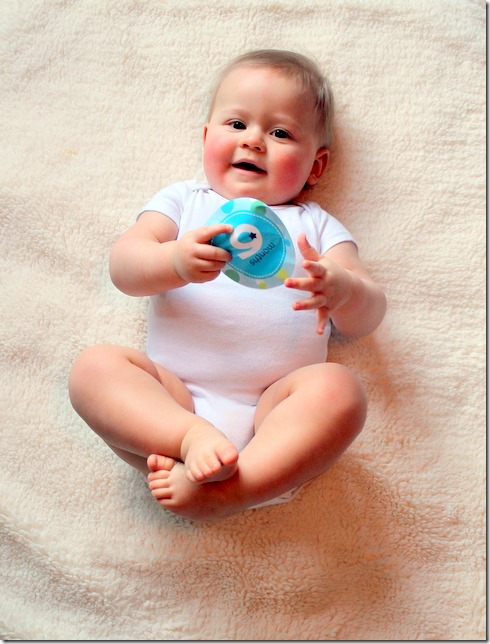 Alex still loves food, and we’ve begun to have fun introducing some more new things here and there, too.

His feeding schedule is still very similar to last month, so not much has changed there. Alex will not nurse if he sees his brother anywhere near him (“let’s play, big brother!”) so I usually have to nurse him in his room where it’s quiet with no distractions.

For foods, we’re still doing a mix of finger foods and purees. Depending on the day/how tired he is at dinner, he can get a little frustrated with finger foods since he tends to miss his mouth more often than not (and, you know, he wants all.the.food.now) so we always play it by ear and try to have both ready to go. 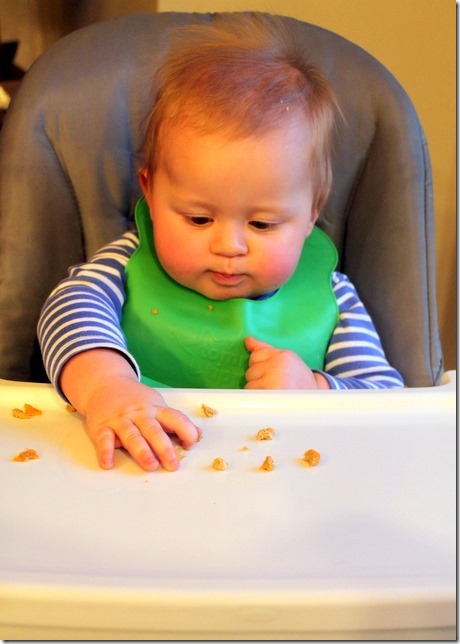 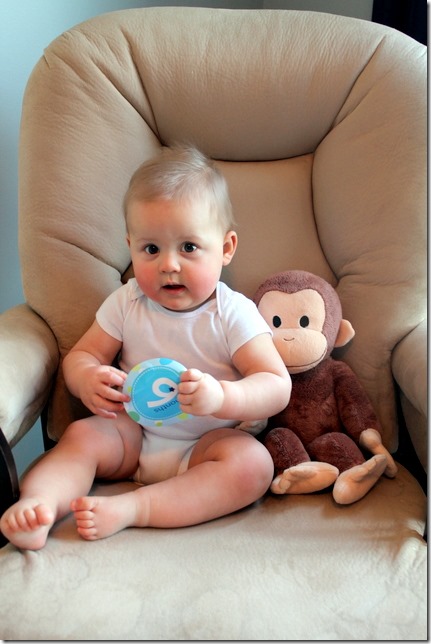 Still pretty similar here. Most days, Alex will nap anywhere between 9-10am and 1-2pm. Those naps can last anywhere between 30 minutes and 2 hours, depending on the day. I’ve been trying to push them a little bit towards the later end of those time ranges since he hasn’t really been taking that third cat nap too much lately, and he can get pretty grumpy if he doesn’t. I wouldn’t say he’s officially dropped it yet (he just took one over the weekend) but I doubt there will be too many more.

He’s been having a harder time falling asleep on his own for naps again (womp wompppp) which I feel may be, in part, due to some separation anxiety that can happen around this stage. Then again, what do I know…he’s probably just totally playing me. ; ) 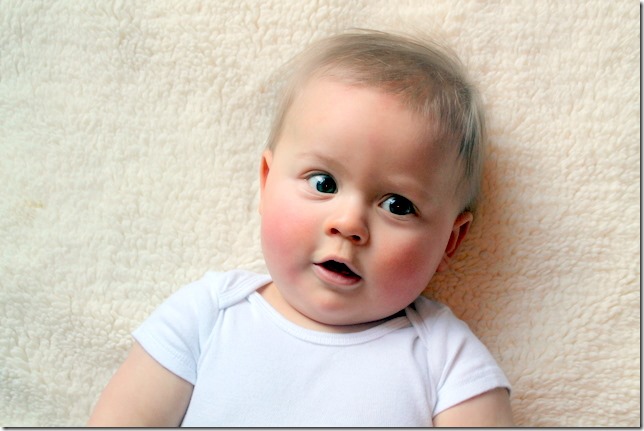 Not too bad! Nights are still very unpredictable right now; some nights, he’ll sleep all night from about 7pm – 6:30 or 7am. Other nights, he’ll wake up once or twice (usually somewhere between 10pm-12am) and need a couple of snuggles before dozing back off. And other nights, he winds up waking (and staying awake) for 1-2 hours (after nursing, diaper change, whatever else we can think of!). Obviously, those nights are frustrating, but they’re not the norm so we just try to ride ‘em out (and have lots of coffee ready the next morning!). I’ve been trying to cut back on the nursing at night, but if he winds up being super upset, I tend to cave since I really just want to go back to sleep!

Alex no longer sleeps in the Baby Merlin Magic Sleepsuit, since he’s become much more mobile and also likes to sleep on his stomach occasionally. So I’ve swapped that out with a wearable blanket (only for nighttime sleep) and for the most part, the change has gone very well. We still put him down awake around 7pm, and he almost always goes to sleep on his own with no crying.

Alex has outgrown most of his 9 month clothes and is now in just about all 12 months (including sleepers with feet). He’s still in size 3 diapers, and wearing size 3 overnight diapers from Pampers, too, but I wouldn’t be surprised if we move up to size 4’s soon. 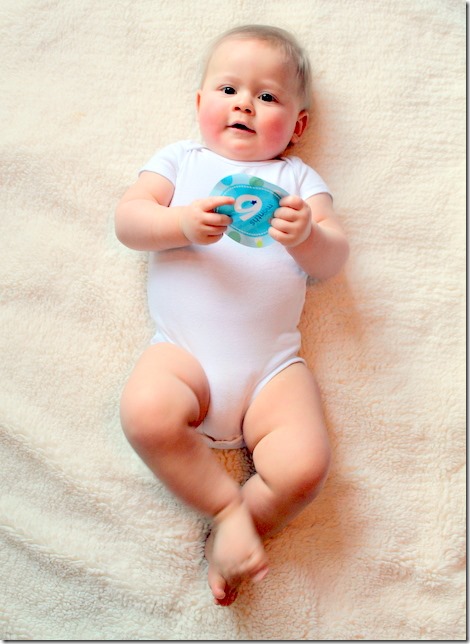 This kid is funny! He loves to be around people and saves some of the best belly laughs for his daddy. 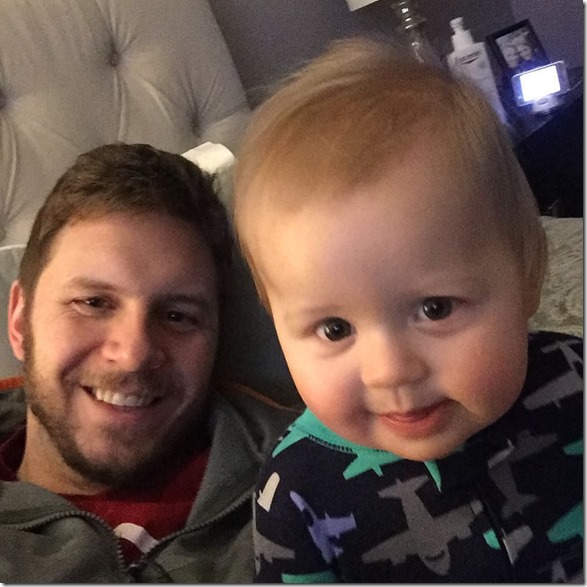 He gets SO excited to see Lucas (or Cody) enter a room, and seeing Lucas and Alex actually interact a bit more this month has been just the coolest. Lucas will start to tell Alex to follow him crawling around, and Alex will start to shriek and smile while following him around. It’s just the cutest.

Alex has also stared waving hi and bye, loves to give nice, big, wet kisses, and likes to play the “How big is Alex?… SO BIG!” game. 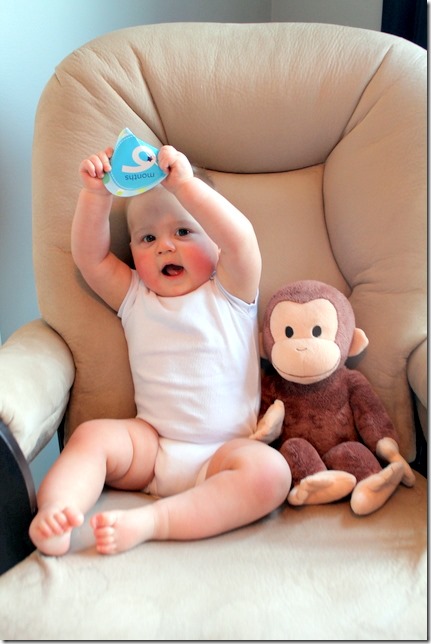 CRAWLING! Alex has officially taken off, and there’s no stopping him now. I’ve also quickly realized just how un-baby proofed a good majority of the house is(!) so we’re working on that. He also loves pulling himself up onto his knees, but hasn’t quite gotten up on his feet yet unless we’re helping him. 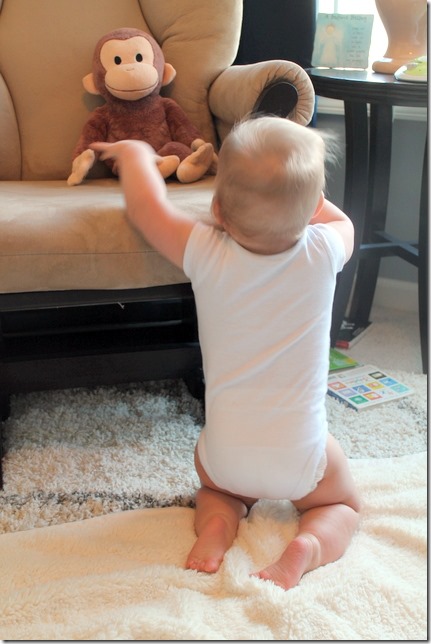 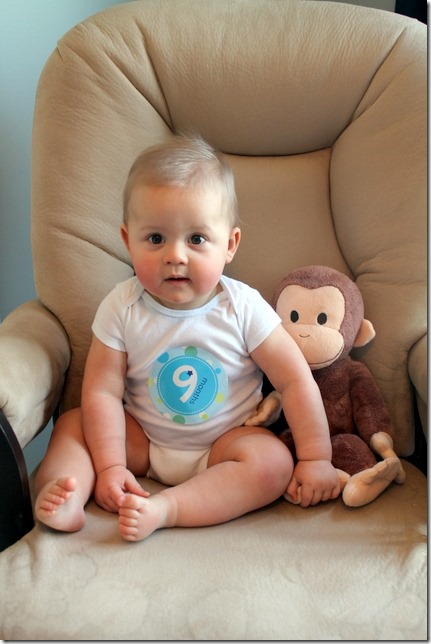 I’m doing well! I feel like I honestly don’t have all that much to report on this month. Life is busy, that’s for sure, but I’ve been going a bit easier on myself in terms of stepping away from things when I need to so I don’t wind up feeling overwhelmed. You’ve probably noticed that there are weeks when I blog less, and I’ve also cut back on the number of Usborne Book parties I do during the week. I love them both SO much, but I know I’m just a better person/mom/wife/etc when I’m balancing my time a bit better.

Since taking away that pressure, I’ve found myself feeling much more relaxed and in control; but at the same time, I also have days where I find myself wanting to really dive into the blog and/or book business MORE and making it thrive! Basically, I want to have my cake and eat it, too. Ha! One of these days I’ll figure it out (or maybe I won’t), but for now I’m content and in a good place.

At this point, I’m honestly just ready for some nice weather, so we can actually get outside and DO stuff. I think we all have some major cabin fever up in here, and the 12+ inches of snowfall we’re expected to get tomorrow isn’t helping things(!!) so let’s hope that melts SOON and March goes “out like a lamb” as they say. These boys and their mama need some fresh air! 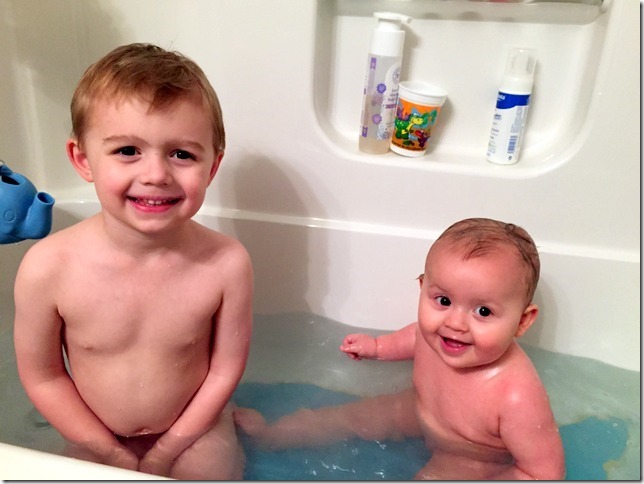