I know it’s one of the most cliché things to say, but I am honestly flabbergasted by the fact that Alex is already one month old.

And this is a long update post, so grab a seat. Don’t say I didn’t warn ya! 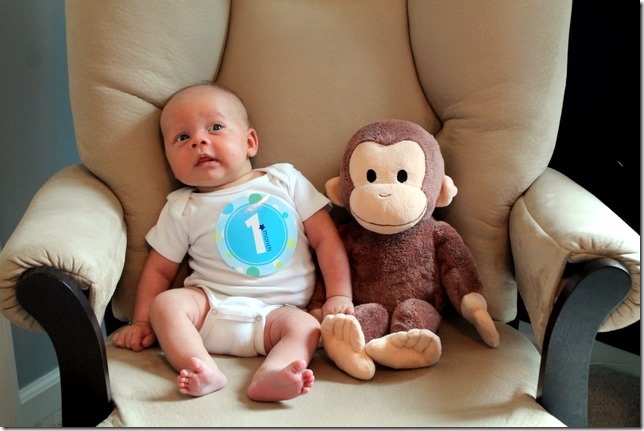 And we totally brought back the monkey from Lucas’s monthly pictures, too!

I already mentioned this on Instagram, but if there was ever a month that has gone by in a complete and total blur, it would be this past one. It honestly feels like we were literally JUST in the hospital… 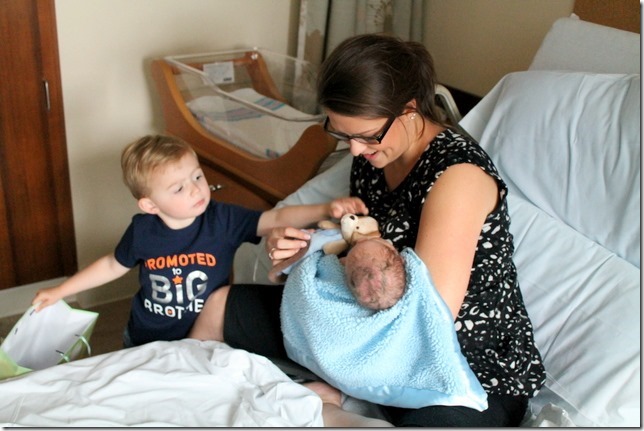 So lets get real.

I’ll be totally honest…this past month has been hard. For a number of reasons, but the hardest obviously being the juggling act that is managing both a needy newborn, and a needy toddler. There are some days where I wind up thinking, wow okay, I’ve got this! Things go smoothly, Lucas listens, Alex isn’t crying all day (I’ll get to that in a minute), and sometimes they even both nap together.

Then there are other days where Alex is quite upset, Lucas is getting into something he shouldn’t be while simultaneously crying/whining because Alex is crying. This is just one example, but one that happens frequently. These are the days that make me wonder how in the world people manage two children…and they’re also the days I’m usually pouring myself a glass of wine at 5pm. 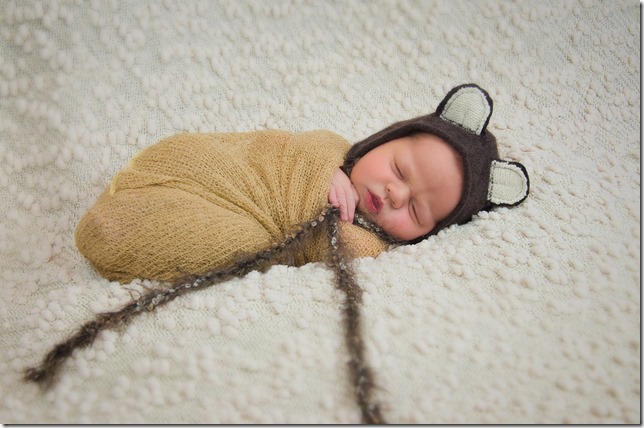 Then around 10 days old he was diagnosed with thrush. The medication the put him on made him very grumpy and I’m pretty sure it also upset his stomach because he was throwing up quite a bit more. The medication lasted for 10 days, and those days were tough. Alex was pretty much never happy; our routine was eat, maybe chill for 5 minutes, then start fussing/crying/puking until it was time for him to nap. Then we’d start the cycle all over again.

Since being off of the medication, the thrush has cleared up and he does have better days. But many days, as the day goes on, he gets increasingly fussy and often requires a lot of time being held/rocked/bounced. This can be challenging on its own, but when I have Lucas who obviously wants my attention and I can’t give both of them what we need, I really struggle. Then Lucas will usually start to act out, Jay or I will have to intervene, patience get lost…honestly, it can just get freakin’ tough. And I’ve cried on more than one occasion, for sure. 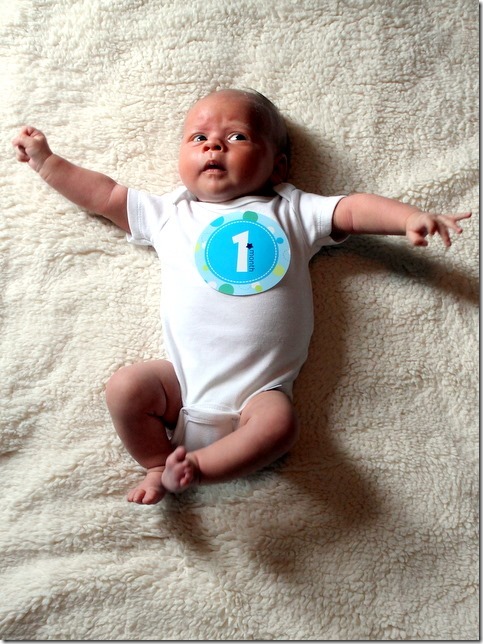 We chatted with Alex’s pediatrician at his appointment yesterday about all of his symptoms, which he said sounded a bit like colic. I’m still concerned that it could have something to do with discomfort from something(s?) I’m eating that doesn’t agree with him, so I’m currently trying to be more aware of what I eat and what symptoms he shows. Right now, it seems as if salads are tough, and dairy may be iffy, but I’m really not sure just yet.

I had gotten to the point where I was wondering if I should start supplementing with formula because either a) something I’m doing is bothering him or b) he wasn’t getting enough milk. But after talking with his pedi yesterday, I’m just going to keep doing what I’m doing, ride it out, and hope that things will start to improve and/or I’ll find something that I can change to help with his discomfort, because I hate seeing him and thinking he may be in pain.

So I relish in the days and moments where our little guy IS happy, alert, and smiling, because they do happen, too! 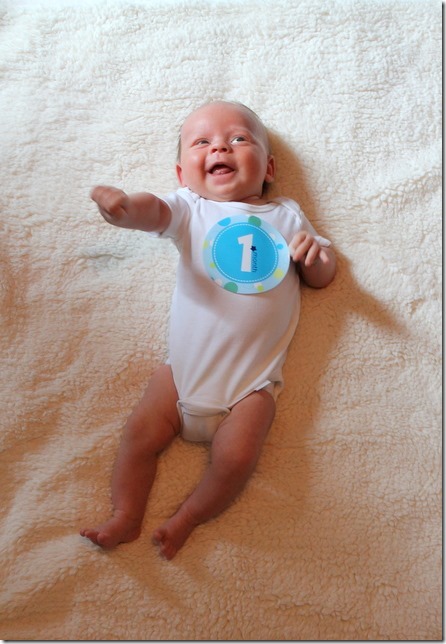 I hesitated getting into all of the details of our first month, just because a lot of it does sound pretty negative. And obviously we are overjoyed with the fact that Alex is here! But these first couple of months can really be SO hard, for so many reasons. I, personally, always appreciate when people are real with me and share their ups and downs, so my hope is that by sharing our struggles this first month, it can help some of you, perhaps, if you’ve also had a less-than-easy go.

I know it will get better and it will get easier. Even the past couple of days have been surprisingly better (yesterday, Alex had a great day!). Once we start to learn more about Alex and he starts to figure us out a bit, I’m sure our rhythm and routine will fall into place. Because he absolutely makes our little family feel complete. 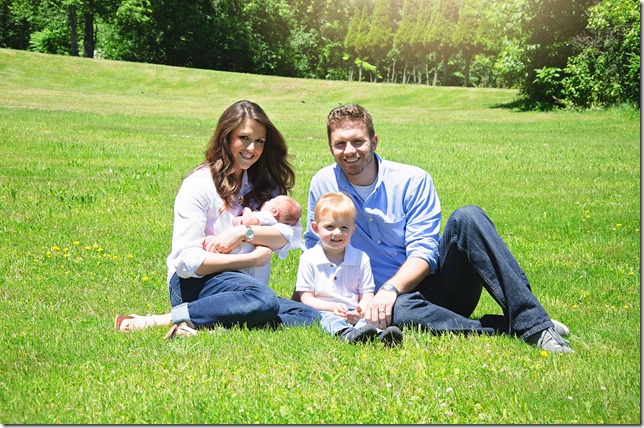 So all THAT said, here are some more details on our little guy!

At his appointment yesterday, he was up to 10lbs 15oz (up 2lbs 4oz from birth) and measured 23 inches long. The fact that he’s gaining so well made me feel much better because I was concerned he may not be getting enough to eat. His pedi was impressed and said he’s doing great

Most days (starting from this past week or so) Alex usually nurses about every 2-1/2 to 3 hours. He’s a very efficient eater and we can usually be done with our nursing sessions in about 15-20 minutes. He’s also successfully taken a bottle a couple of times and I think we’ll likely try to keep those happening regularly (one every day or every other day) just to keep him used to it. 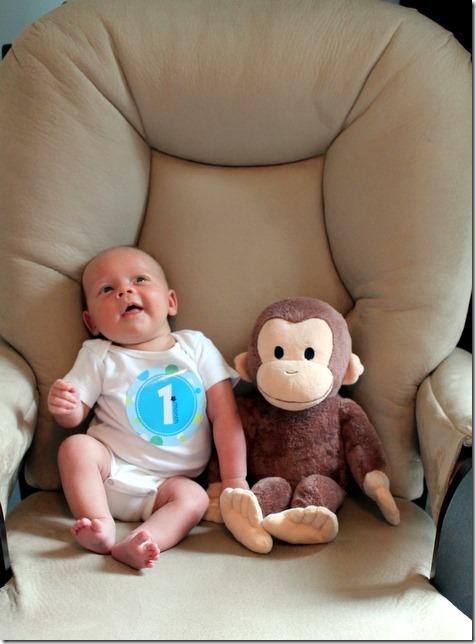 All over the place. Some days, he’s a total catnapper, and those tend to be the days where he winds up being a grumpster. Other days, he sticks with a really great schedule of eat/play/sleep on a three hour cycle. I try to loosely follow the schedule from Moms on Call, but every day is different so rather than focusing on exact times, I just try to focus on sticking with the eat/play/sleep routine.

Right now, Alex usually gets his bedtime feeding anywhere between 8:30-9:30pm (depending on where he is in his schedule that day). He wakes up once, anywhere between 2-4pm to nurse, then goes back down until about 7-7:30am. The past couple of nights, he hasn’t wanted to go back down very easily in the middle of the night and has been up for about 2 hours, so that’s been tough; but other than that, nighttime sleep has bee really good!

He’s outgrown most newborn clothes and is in mostly 0-3 or 3 month outfits. He’s still in newborn diapers, but likely not for long! 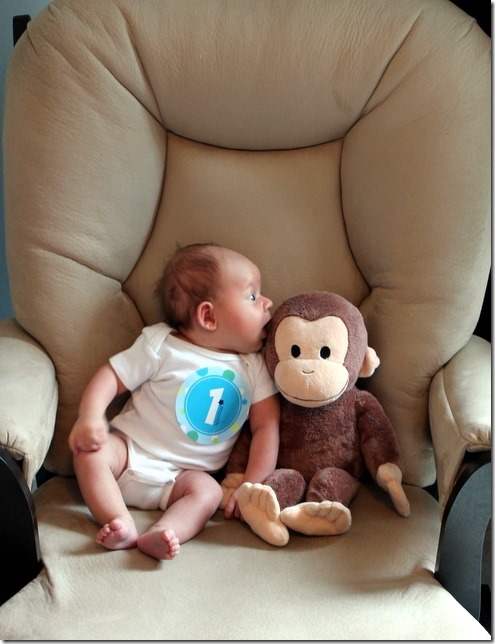 Eating, fans, his big brother (loves looking at him and responds to his voice immediately), being held/bounced, white noise, his swing, being outdoors

Baths (oh my, does he dislike them…), being overtired, tummy time, diaper changes (sometimes), having clothes changed over his head 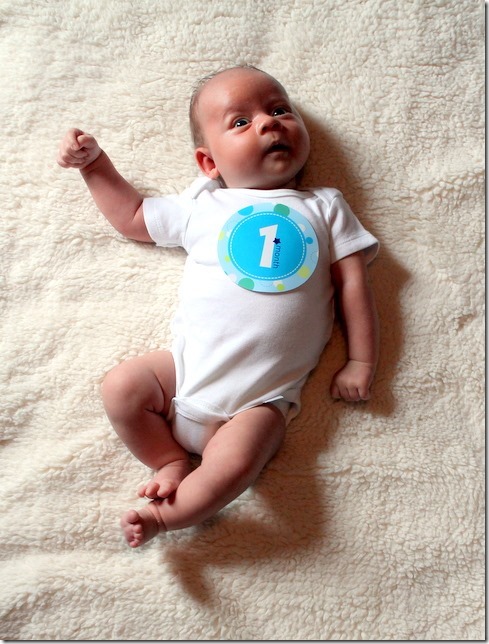 I’m really looking forward to having his little personality continue to emerge and to see how things progress this next month. Hopefully, things will start to settle a bit, but regardless, he’s still our sweet Alex and he is loved beyond words. <3

*Just for fun, here’s a look at Lucas’s 1 month update…general consensus is that the two look nothing alike! What do you think?!