Happy Monday to you all! I feel like today is officially the “back to normal” day for most of us; schools are back in session, most holiday gatherings are over, and reality is just…back. Ah well, we knew it was gonna happen soon enough!

So our weekend was fantastic. Lots of fun happenings and celebrating to share, starting with our anniversary date night on Friday night. 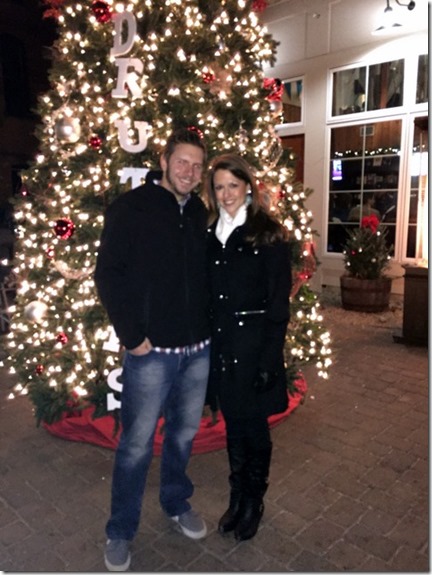 Since we’ve been venturing to many of the same places on our date nights lately, we decided to take a special trip up to Saratoga. It’s one of our favorite areas, and since there was no inclement weather in the forecast, we said it was worth the drive (about 40 minutes away for us). Our first stop of the night brought us to Druthers, a restaurant and brewery in downtown Saratoga that I’ve been dying to go to for ages now. 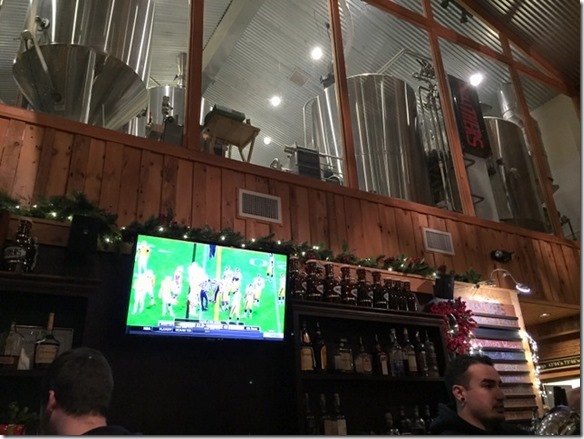 I have no idea how because the place was packed, but we somehow managed to find two seats right in the middle of the bar. Score! Our plan was just to sit for a drink and an app, and after checking out their beer menu, we decided to go with a sampler flight (it was too hard to decide!). 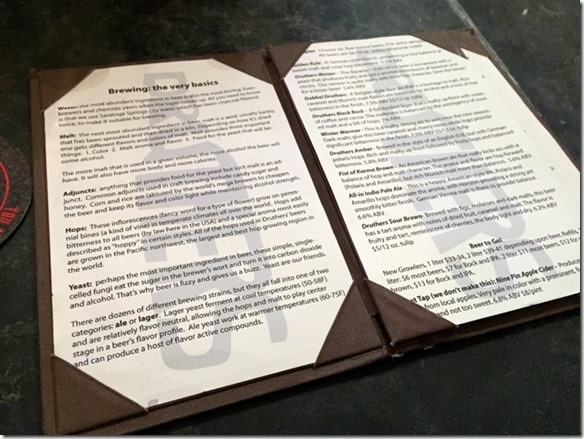 We had six beers to try and, out of all of them, my favorite by far was their Sour Brown. It was such a unique brew, somewhat fruity and tart, and I’m so glad that the bartender recommended it! 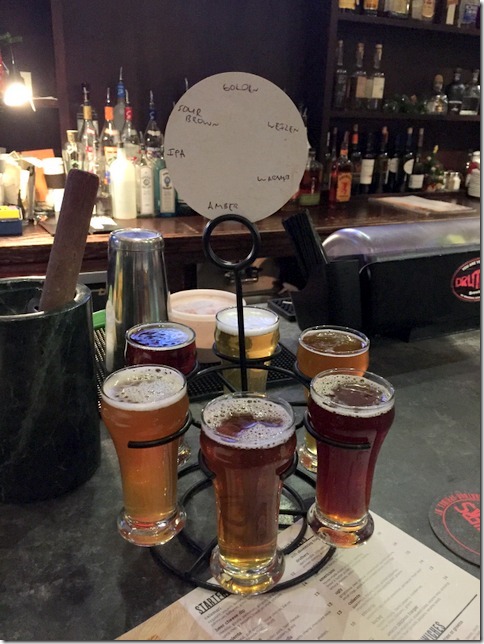 As for an app, we ordered the Beer Cheese Dip and, OH. MY. GOD… 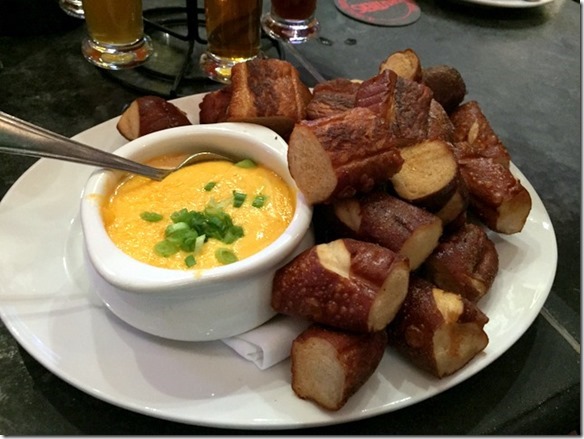 I could eat that stuff every single freakin day. Had we not had plans to continue the evening for an actual dinner, we absolutely would have polished that plate off. But I will say we came pretty darn close. So if you ever go to Druthers, please, get that stuff!

But like I said, since we didn’t want to stay in just one place, we decided to head over to one of our favorite restaurants for dinner, Olde Bryan Inn. It had been ages since we’d last been there (you can see some older visits from way back in 2010 and 2011 here and here), so since we’re not up in Saratoga too often these days, we knew we had to make a stop.

There was a short wait for a table, so we grabbed a couple of seats at the bar and had a round of drinks. 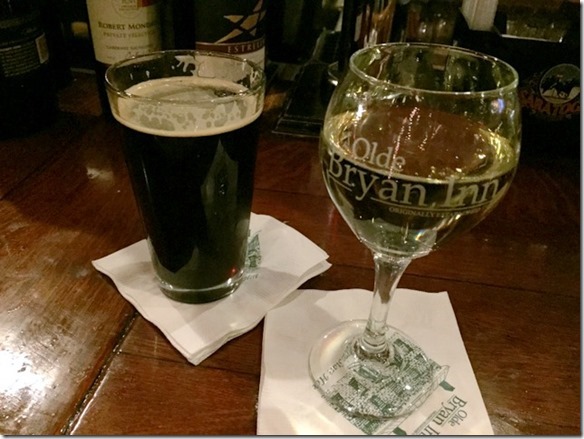 Jay and I seriously love sitting at a bar. We have some of our best conversations there!

Eventually, we got our table and ordered some dinner, including a steak for Jay and the Chicken Florentine dish for me. 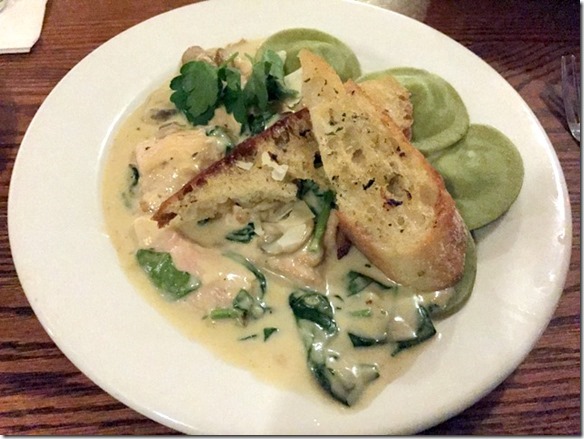 Ummm, talk about delicious?! I can’t believe I hadn’t gotten that before…it was SO good!

Since it was a celebratory evening, we couldn’t leave without dessert, so we ordered a slice of their chocolate chip pie a la mode. 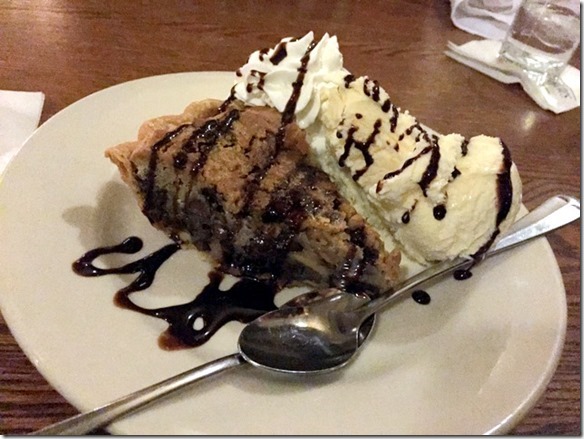 It was pretty good, but it had walnuts in it which was super lame…nuts do not belong in (most) cookies or brownies!

Date night was certainly an amazing, much-needed night out, but Saturday morning was equally as fun and exciting. I don’t think I told you guys this before, but we signed Lucas up for soccer camp. 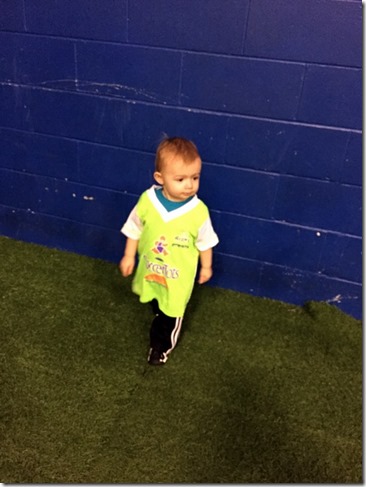 Talk about hilarious and adorable! Lucas started his “Teddies” class at Afrims and while the class is supposed to start at 18 months, I called to see if we could squeeze him in a few weeks early (he’ll be 18 months on the 27th of this month) and they said it wasn’t a problem. 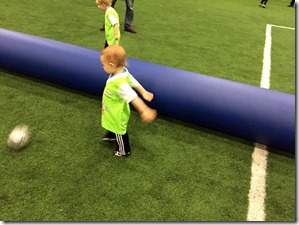 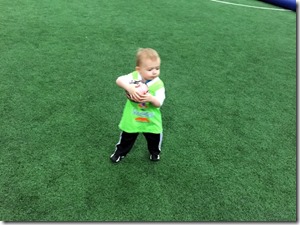 The class is about 50 minutes long and it will last for 8 weeks. It’s really just a bunch of kiddos running around throwing and kicking things, but they do attempt to show them some “skills,” and it was just so darn funny to watch. 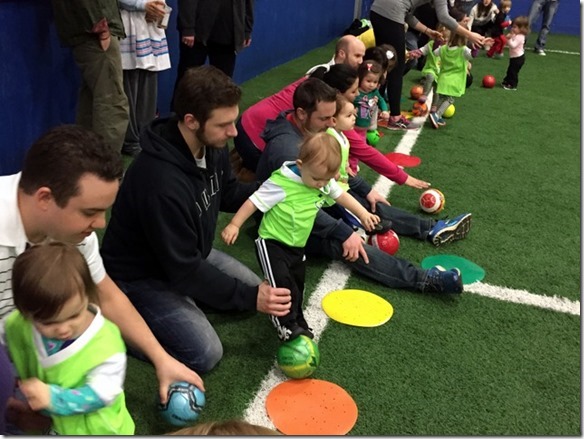 By the end of class, Jay and I both decided that this class would not only be a great way for Lucas to run off some energy, but it also proved to be a pretty decent workout for the two of us as well. Lots of running around! 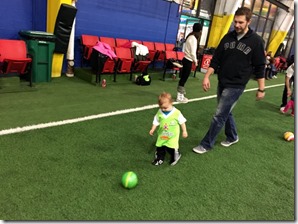 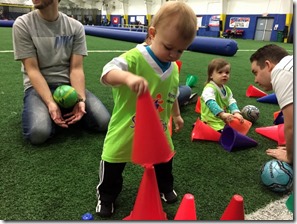 I’m pretty sure Jay took a video at some point during the class…I’ll have to see if I can get my hands on that!

Once soccer was over, we came home, Lucas crashed for his nap (just as we had hoped, woop woop!), I squeezed in a workout, we did a few things around the house, and then we were off to a birthday party. 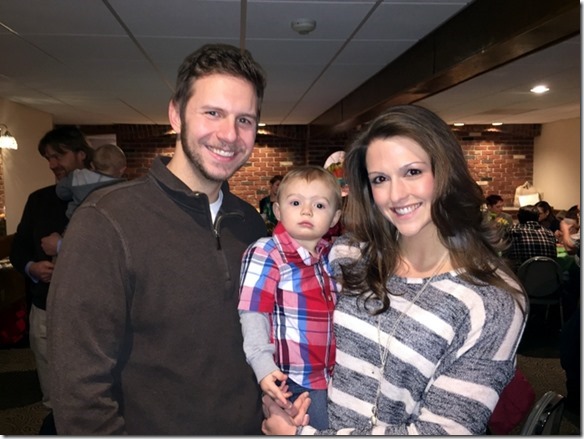 Our pals Joey and Kate’s daughter, Samantha, turned one (man, time flies!), so we were excited to go and celebrate with them. 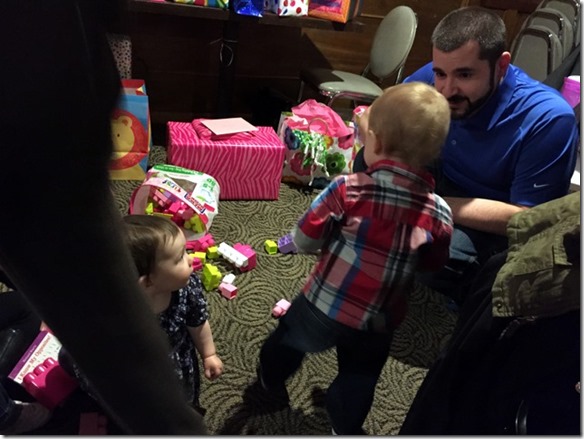 We snacked on some food… 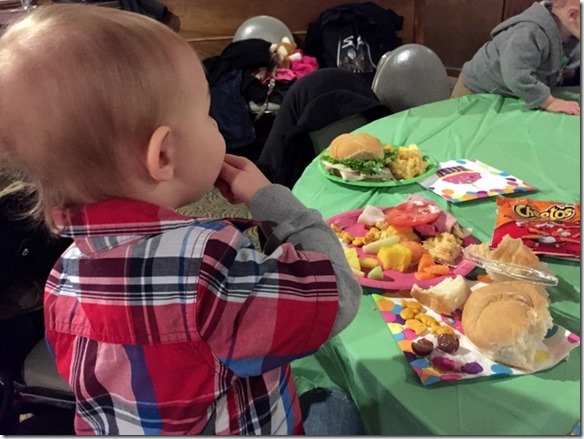 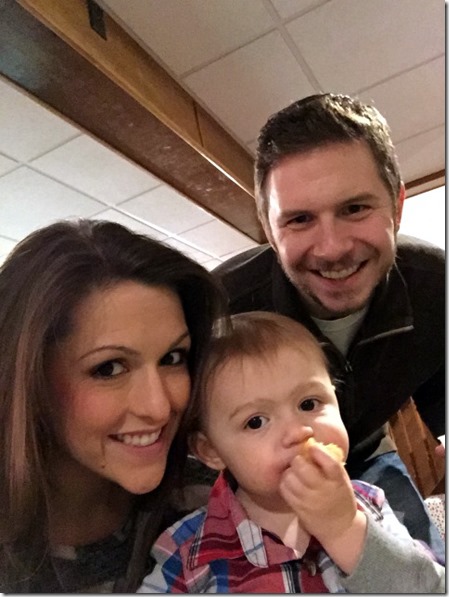 And we attempted (and failed) at taking a group photo of the six of us. Ahh well…you can’t win ‘em all, right? 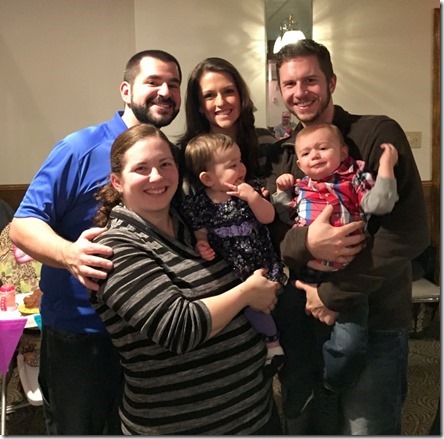 On Sunday, I had plans to meet up with some of my girlfriends for brunch but, due to the crappy weather we were getting, we decided to reschedule. So since those plans were nixed, I took advantage of the extra time to be a bit lazy, got in a good lower body workout, and took my time doing some grocery shopping. 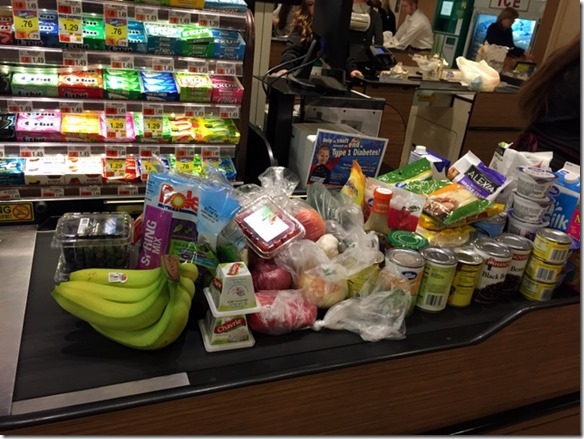 I also did a little food prep for the week, including some salad bases for me and a few lunches and breakfasts prepped for Lucas. 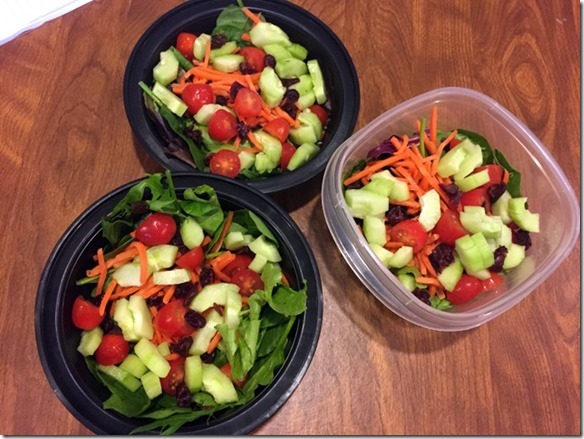 I made a fresh batch of Chicken Parm meatballs the other day for him to have during the week. So easy and convenient (I just use my recipe for Chicken Parmesan burgers and roll them into meatballs – bake in a 9×13 dish at 350 degrees for about 18-20 mins!). 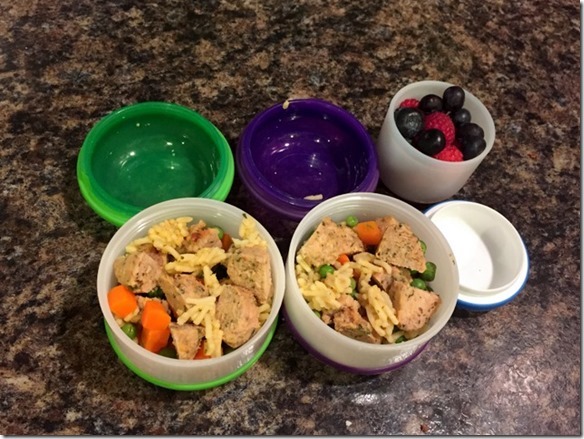 We finished off Sunday evening with another episode of Orange is the New Black (after watching 3 more on Saturday evening) and some cookies. Not a bad ending to a fabulous weekend at all!

So how about you guys? Did you have anything fun happening? Anyone else feeling like it’s finally “back to reality” today?