Hey, thanks so much for all the “congrats” yesterday, you guys! I don’t think it’ll ever feel “natural” to glance down and see my face in a magazine or splashed across a TV screen, so I’m still sort of soaking it all in. So weird, so cool.

Since yesterday’s post was a bit different from my usual Monday recap of the weekend, I figured I’d go ahead and share a few pics now. In fact, this post is probably gonna be a little all over the place but we’ll just go with it.

I spent Saturday with some of my best girlfriends setting up for (and celebrating!) my friend Eileen’s bridal shower. It was a busy and super fun day, and it left me wiped and ready for bed early.

On Sunday, Jay and I had our friends Kanika and Shaheen over, along with their cutie pie little girl, Kaura, for lunch and a play date. Considering their last play date was months ago, we figured they were due.

And, umm, the adults were overdue, too.

So the four of us hung out outside while the babes played at the water table and in the kiddie pool. 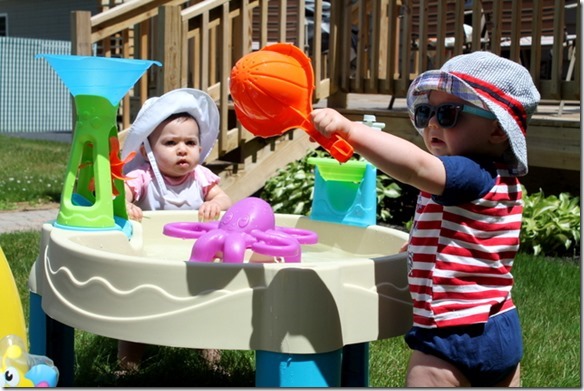 I’ll tell ya…babies in swimsuits will just never, ever get old. Watching the two of them play together was just so fun, and they seemed to be having such a good time. 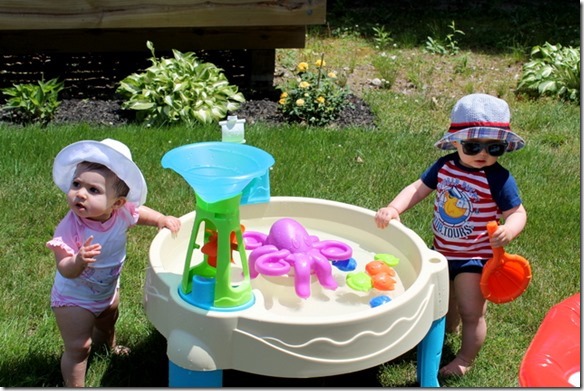 That is…except for when Kaura started splashing in the pool. She was having a total blast in there and Lucas turned into total cry baby mode. 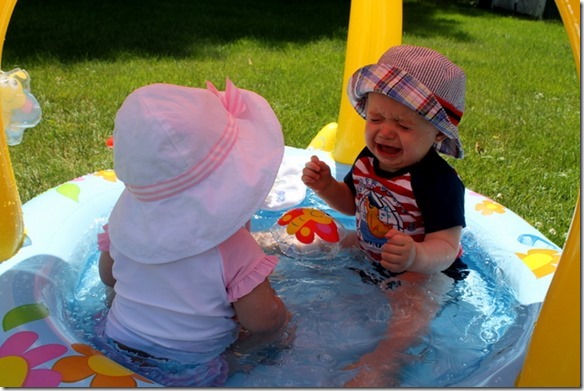 Does it make me a bad parent to say that this is now another one of my favorite photos of him?

After a little while of playing and chatting, the babies sat and had their lunch… 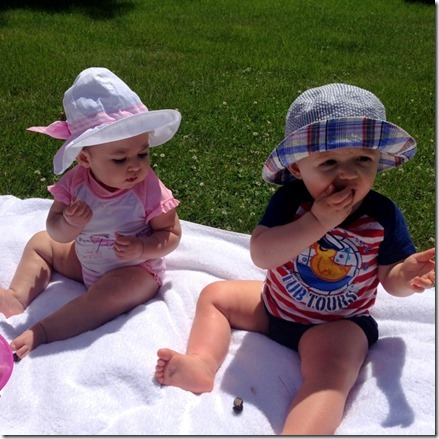 Then the adults had theirs. Pizza on the grill, baby. 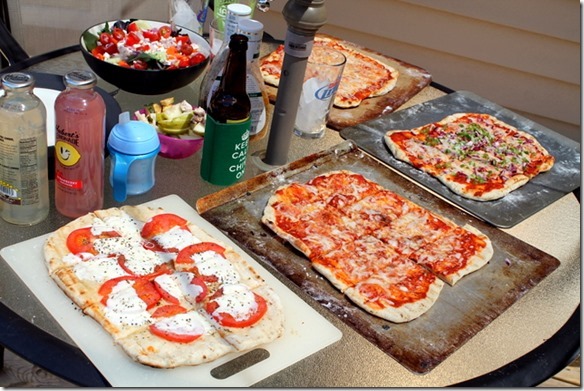 And ya know what? The only thing I can take credit for up there is the salad…all four of those grilled pizzas were made completely by Jay. I was so impressed! We had two cheese, a white pizza with fresh tomatoes, and one with peppers and onions. So, so good.

Thanks to Kanika and Shaheen, we also had dessert. Oh myyyy, did we have dessert. 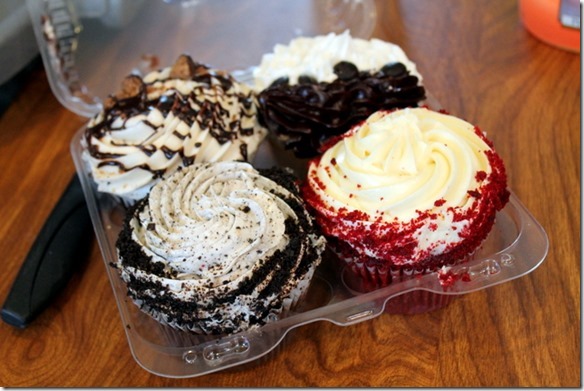 A nice assortment of jumbo cupcakes. I mean, pizza on the grill AND cupcakes. Talk about winning.

It was a great afternoon spent with friends, indeed. That evening, I wound up getting a little bit of a burst of energy shortly before Lucas went to bed, so I decided that I’d do a little yoga once he was actually down. I just did a quick, 20 minute video but it felt great, as always.

Actually, I realized that I never really filled you in on my yoga class that I took last week! 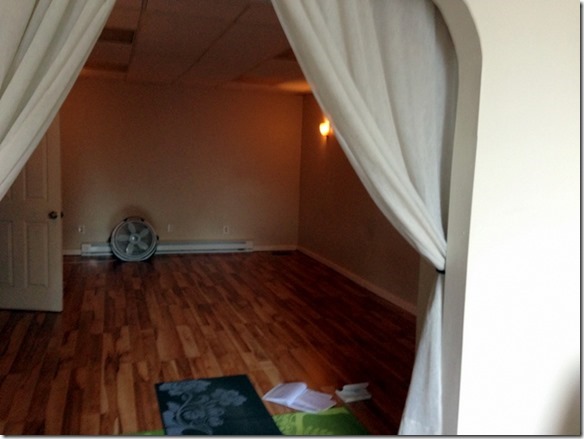 So I coerced my friend Morgan at work to sign up for a Living Social deal with me at a local yoga studio, since we’ve both been saying that it was something we wanted to try. The deal is for 5 classes, which we figured would give us a chance to try out a few different types of classes, and the first class we attempted was a vinyasa style. 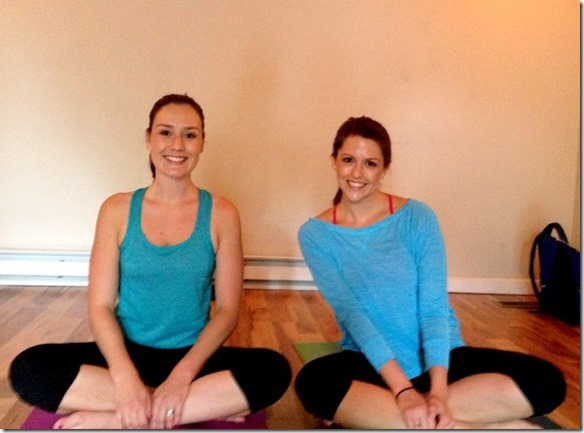 Oddly enough, it was just the two of us in the class (we assumed maybe it was because there was a sub teacher, not sure?). The class itself was alright, but not a favorite. I was surprised, because most vinyasa style yoga I’ve done is pretty fast paced and keeps you moving…but this one was very, very basic. Relaxing, but a bit boring.

But hey, ya know what? The two of us still had fun and we’re so excited to head back for a few more classes (hopefully next week, since this week is out for both of us). And, of course, we both made sure to hydrate properly, post-workout some Propel. 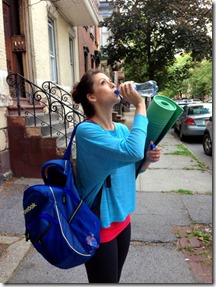 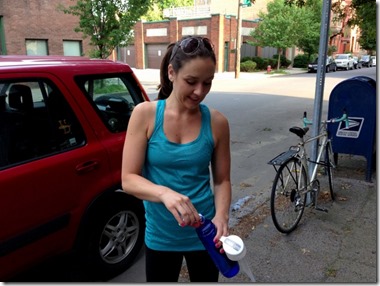 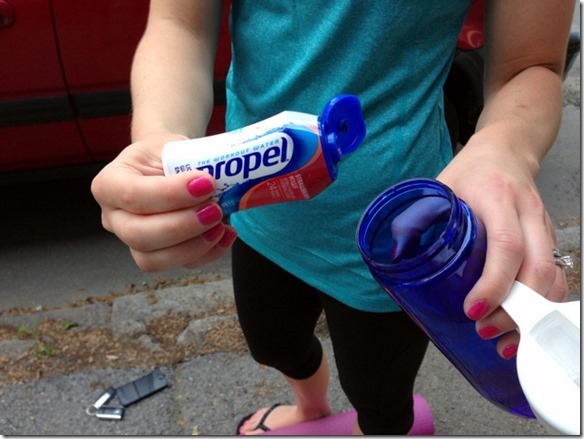 So yes, I have Propel and their Add Flavor Challenge, to thank for getting me out of my comfort zone a bit and trying a different kind of workout with a friend this month. And better yet, we’re totally planning on continuing this challenge for ourselves in the weeks to come. Because, as much as I enjoy working out at home, working out with a buddy can be a freakin’ blast!

What do you guys think? Do you prefer and/or enjoy working out with a friend? What are some of your fave “buddy” exercises and/or workouts?

Disclaimer: This post is part of my partnership with Propel. All opinions, as always, are my own.