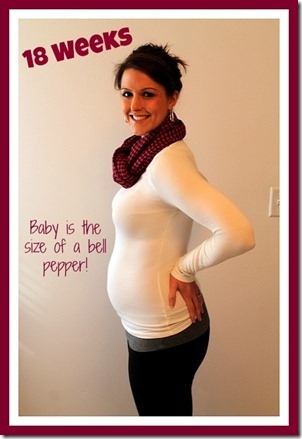 Is that crazy or what?!

Baby Tooth is just over 18 weeks today and is about the size of a bell pepper.

Weight gained: Not checking anymore, and probably won’t until our next prenatal appointment. I’m totally fine with that!

Workouts: Still going well! This week included 5 days of workouts, including a good mix of cardio (walking), strength, and Pilates. Some of the workouts are short – 20-30 minutes – but it still just feels great to move. I’m still loving that Pilates DVD more than anything…so much so, that I still haven’t had the chance to try my new yoga DVD. Maybe next week.

Symptoms: This week included a few:

Movement: Yup! I usually feel something just about everyday now, even if it’s just once of twice. It brings a smile to my face every single time…I can’t wait for Jay to be able to feel it.

Food Cravings: Nothing too exciting on this front. Most of the usuals continue to make their appearances, with a heavy sweet tooth still in action.

Sleep: So-so. I’ve been waking up at least 3-4 times a night lately, either to pee or just because I’m uncomfortable. There were a few times where I still, somehow, wound up on my back again in the middle of the night so I’d move if I found myself in that position.

Maternity clothes?: Yup. This is pretty much a given at this point for me. I can still wear my non-maternity jeans, but I’m finding that some of them aren’t quite as comfortable as they were a couple of weeks ago. I’m feeling that I’ll (hopefully) be able to better “fill out” some of my maternity shirts within the next couple of weeks.

Stretch marks? Not yet…still oiling and lotioning it up!

Miss Anything? I’ve been pretty content this past week so I can’t complain.

Baby Items Purchased: Nothing specifically for the baby yet, although we’re getting much closer…in about two weeks, we’ll finally know whether we should be buying pink or blue.

Over the weekend, I did mention that I bought this book for Jay. He’s bringing it to Mexico so I’ll be interested to see what he thinks of it. 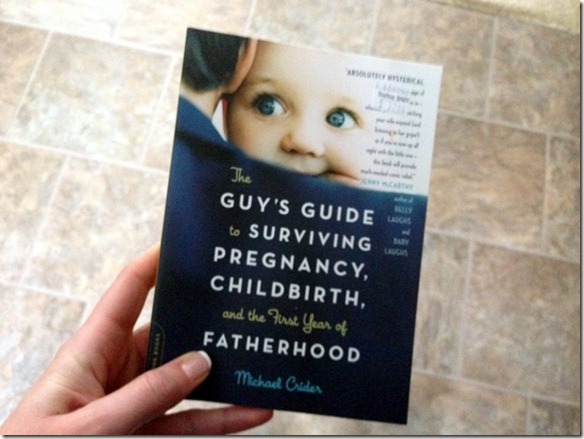 The Guy’s Guide to Surviving Pregnancy, Childbirth and the First Year of Fatherhood

I think it looked super cute as I was browsing through a few pages.

We’re also about 98% decided on the baby furniture we’re going to purchase (it’s the Baby Cache Montana collection in espresso) so once we’re back from vacation, we’ll most likely move forward with that. We’ve also decided that once we’re back, it’ll be time to really buckle down and get the rooms in the house organized and re-organized. We need to re-do the insides of our closets to make some more space (since our stuff is pretty much scattered everywhere right now) so that’s top priority for me.

Looking Forward To: Baby Tooth moving enough for Jay to be able to feel it. I feel like it could happen anytime soon now! Hey, maybe he/she will get rambunctious while we’re in Mexico. 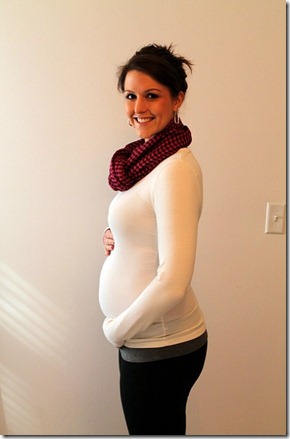