How about a little change of scenery for this week’s Baby Tooth update?! 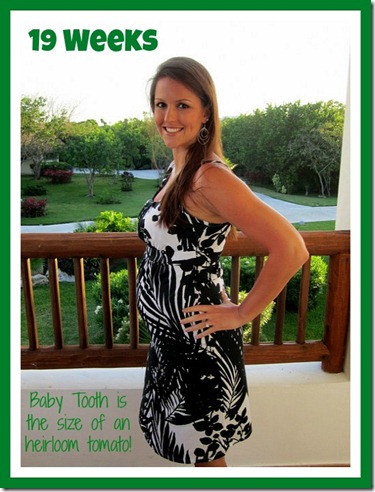 Yeah, I think I could get used to that kind of scenery every week.

*And just in case you’re wondering, the dress is a maternity dress from Old Navy (and so is the pink one that I wore in Mexico, too!). It’s actually much more flowy than it looks, but I wanted to be sure you could all see Baby Tooth in there. I absolutely LOVE the dresses and am so thankful to have them for this coming summer.*

SO…Baby Tooth is just over 19 weeks today and is about the size of an heirloom tomato. 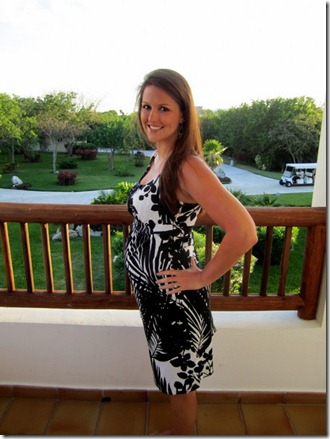 Weight gained: After this past week in Mexico, I can only imagine.

Workouts: While we were away, I did make it to the gym once to do about a mile walk + a strength circuit. Another day, us girls took part in a water aerobics class in the pool which was fun and actually pretty tiring! On Thursday night, we wound up having a crazy awesome dance party which lasted well after midnight in la plaza (just like last year, but without the rain) which REALLY worked up a good sweat. Other than that, just a lot of walking. I’d say swimming too, but I’m more of a floater/relaxer.

Symptoms: This week included a few:

Movement: LOTS of it this week! It’d be so fun to be lying in the pool chair or sitting at dinner and suddenly feel he/she making his/her presence known. I’d start smiling out of nowhere and if anyone was looking in my direction, they knew what was up. I’ve actually noticed Herm (see below) more in the evenings – probably between 6-10pm – but it’s still all day.

Food Aversions: There were a few times where I ordered shrimp while we were out to dinner, thinking it sounded good. But when it was placed in front of me, I’d have a bite or two then couldn’t handle anymore. Now the thought of it grosses me out. So weird.

Food Cravings: Most of these had to do with being in Mexico, but while I was there I could NOT get enough guacamole. Seriously. It was on my plate every day at lunch. Another lunch time staple for me was their ice cream; every day after lunch, I’d have a small bowl of either lemon (which is actually lime down there, who knew?!), strawberry, or coconut ice cream with mini chocolate chips. It was the bees knees.

Sleep: Not bad…the bed we slept in wasn’t super comfortable for me, but because we had so much going on everyday, I really had no problem falling asleep at night.

Maternity clothes?: Yup! I got to wear three different maternity dresses this past week, which all came from Old Navy. Although there are some regular clothes I can still wear, I’ll probably remove this question from here on our since they’re pretty much a given at this point.

Stretch marks? Not yet…but I feel like I might be seeing the faint beginnings of the lovely linea nigra I was hoping to avoid. Ahh well, what can ya do!

Miss Anything? I did miss being able to sip on some of the different cocktails by the pool this week, but the staff was super accommodating and able to make me pretty much anything sans alcohol. We also went out for Japanese/sushi one night, and I did miss being able to eat some of the different rolls; however, there were some killer veggie rolls that totally made up for it.

Fun and/or Interesting Things from the Week: While we were away this past week, I wound up naming the baby Herm. I kept referring to it as he/she or him/her (although, more times than not, I’d refer to it as a he…intuition maybe?!) which got a little tiresome, so I somehow came up with Herm. Now, our whole group refers to Baby Tooth as Herm and it’s a fun little joke we all have. Apparently, amongst our group of friends, the bet is that Herm is a GIRL…but we’ll find out soon enough! 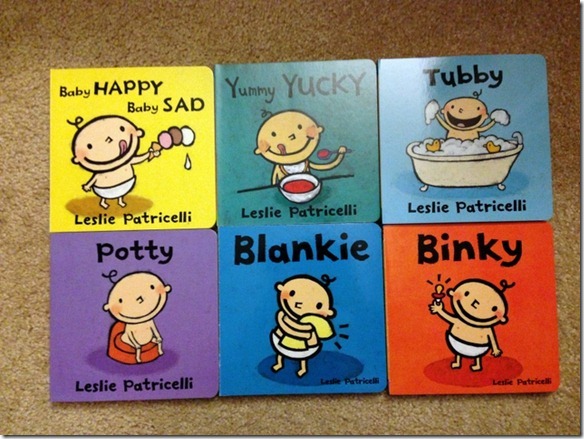 I wound up purchasing these on Rue La La a couple of weeks ago because I thought they just looked too cute to pass up. 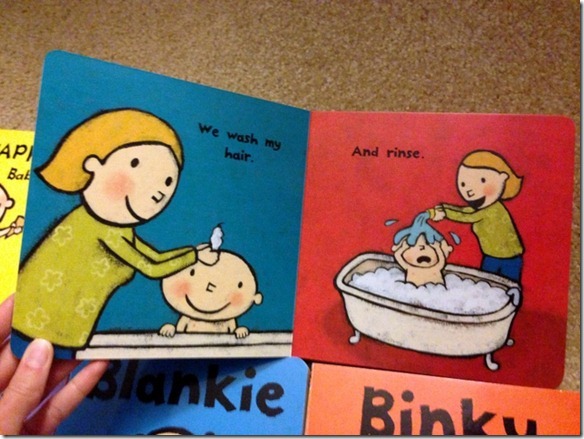 Looking Forward To: Next week’s 20 week prenatal appointment…which should also tell us if Baby Tooth is a boy or a girl!!! I’m also looking forward to putting together a registry, but to be quite honest with you, I’m finding it TOTALLY overwhelming. There’s just SO much stuff out there!

So that being said, today’s question is…

For the moms: What items would you totally recommend putting on a baby registry? Anything you’d say to not worry about?