I think Baby Tooth is reeeeeally growing in there… 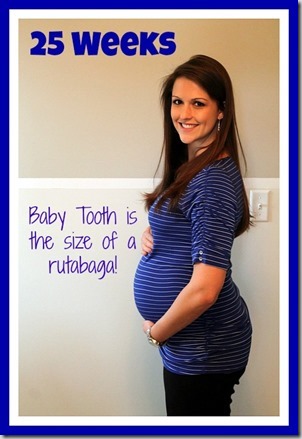 Either that or my extra snacks are starting to become more obvious.

Baby Tooth is just over 25 weeks today and is about the size of a rutabaga. Not quite sure I’ve ever even eaten a rutabaga, but it seems fun.

Weight gained: Won’t know until my next appointment.

Workouts: Pretty good! Last week included four solid workouts, with plenty of movement in between. There was some strength training, some cardio, and some yoga…a good mix, if I do say so myself!

Movement: YES! All the time. Jay has been able to feel him a couple of times since that first night and it never gets old.

Food Aversions: Hot coffee is still only kosher for my morning cup (actually, I usually only drink about half of it). Still can’t think about shrimp and I had a weird day where eggs grossed me out, but that passed quickly.

Food Cravings: Lots of the same…Mexican, cheeseburgers, and ice cream are probably my three big indulgent cravings. This week, however, I have also been craving some of the good stuff too, like veggies and fruit – specifically berries and citrus. I’ve been craving a berry smoothie in the WORST way but just never get the chance to make them. Booo.

Sleep: I have no problem falling asleep, but I’m finding that I wake up a lot more often now. Usually it’s either to use the bathroom or because I’m uncomfortable. There’s also been a few times where I woke up with leg cramps…they were definitely no fun!

Miss Anything?  Most of the same…pre-pregnancy workouts, wearing regular pants/clothes, a lower back that is pain free, and beer. But honestly, I’ve been feeling so blessed about everything that these are really very mild things. I’m just loving so much about pregnancy.

Fun and/or Interesting Things from the Week: Not too much out of the ordinary this week, but I do feel like my belly is growing like craaaaaazy. Sometimes I think, geez, this thing is huge…then I realize I still have a good 15 weeks ahead of me. Yikes!

Belly Button in or out? Still in. I’m tellin’ ya…there’s no way it’s coming out.

Happy or moody most of the time: Definitely happy a majority of the time! I’m still a little stressed about daycare, but I’m asking around like crazy and starting to get some potential options.

I did also have a ridiculous meltdown the other day and wound up crying over something stupid for a good 45 minutes. And not just tears…we’re talking full out sobs. And then I’d be in the midst of arguing with Jay while crying, and then start laughing because I realized how obnoxious I was being…and then I’d get mad at him when he laughed back at me for laughing in the first place. Ohh, it was quite a scene.

New Baby Items: We got some diapers from our friends Josh and Erika, which their little girl already grew out of. Hey, I’ll take hand-me-down diapers any day! Other than that, we’re trying to take it easy on the extra expenditures since some of the work in the nursery has been adding up quickly.

Looking Forward To: Continuing with the nursery, getting the rest of our furniture in (thought it was going to be in this past weekend), and helping any way that I can for my two baby showers that will be coming up in a couple of months. Yay!

Question for the Moms:

At what point did you feel like your belly was really starting to pop/grow?