Alright…I’m about ready to get this show on the road! 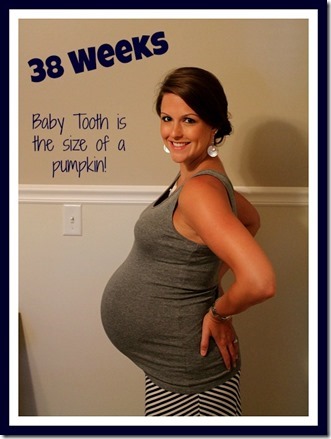 Baby Tooth is just over 38 weeks today and is about the size of a pumpkin (yikes, that’s a scary thought)…and mama is ready. Like, more than ready. Buuuut, we’re still holdin’ strong over here! 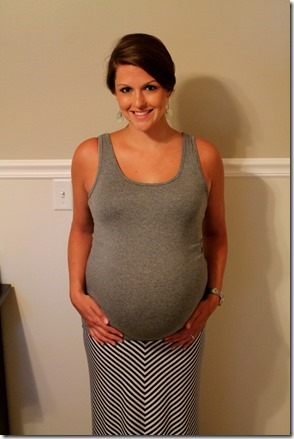 Workouts: I have been able to do some exercises in the pool, which have been awesome. Squats, lunges, pushups and tricep dips on the ladder…oh my gosh, it feels SO great to move. I’ve also been doing a few laps, but really, I’m not a swimmer so my “laps” are me scurrying around the pool with my doggy paddle. I still try to do extra walking when I can, but that’s about it.

Labor Signs: Still some contractions and/or Braxton Hicks, but nothing that shows any sort of a pattern. Some people are telling me it looks like I’ve “dropped,” but who knows.

Symptoms: Lots of the same…

Movement: He’s definitely still on the move, but his movements have slowed down a bit. Hopefully that means he’s settling in?!?

Food Cravings: None really that I can think of and/or blame on pregnancy. Watermelon sherbet is a favorite as of late, but I’d be all for that anyways right now with this heat. Food in general just doesn’t sound super appetizing these days and I don’t get as excited for meals as I’m used to.

Sleep: A little better this week, actually! Minus the having to get up to use the bathroom 1-2 times a night, sleep has actually been pretty decent…which is surprising because it is not all that easy to get comfy lying down in bed these days.

Miss Anything? All the same stuff as I’ve mentioned before.

Fun and/or Interesting Things from the Week: At my appointment last week, I found out that I was about 1/2 centimeter dilated and about 50% effaced…aka, not a whole lot going on up in there! Although I know things can change overnight, so that really isn’t much of an indicator of anything…or so my doctor tells me.

Belly Button in or out? We’ll say neutral. As you can see in the picture above, it doesn’t really stick out at all, but my indent is just about gone.

Wedding rings on or off? Still on, but snug in the heat.

Happy or moody most of the time: Despite the fact that, after reading through a bunch of this post I sound miserable, I’ve actually been super happy! I’ve absolutely been LOVING the time that Jay and I have been spending with each other, and I’m finding myself laughing harder and more often than normal when we’re together.

Often times though, for whatever reason, if I find myself laughing hysterically at something, I’ll suddenly get this weird wave of sadness/emotion that makes me want to cry. It’s the weirdest thing…and most days I still feel like I could cry at the drop of a hat, despite the fact that I really am happy. I guess I’ll blame it on my hormones and nerves, which are definitely starting to kick in a bit more as D-day draws closer!

New Baby Items: None that I can remember? Then again, that’s not saying much…pregnancy brain is a real thing, my friends.

Nursery Sneak Peek: So I mentioned this earlier, but the nursery isn’t totally done. Most of the things I want to put on the walls won’t happen until he’s here, but despite the almost-naked walls, everything else is just about ready to go, so I figured I’d share a few pics!

First, here’s a look at what we started with… 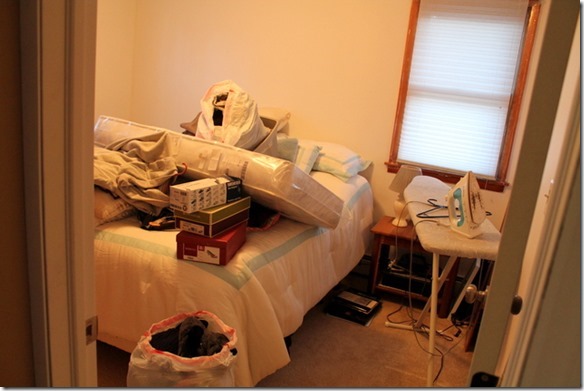 A messy spare room, filled with so much more than we ever realized. 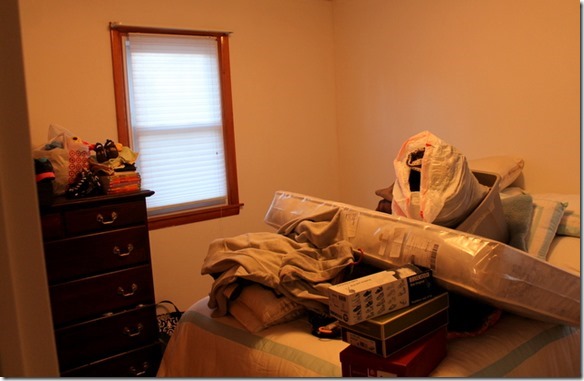 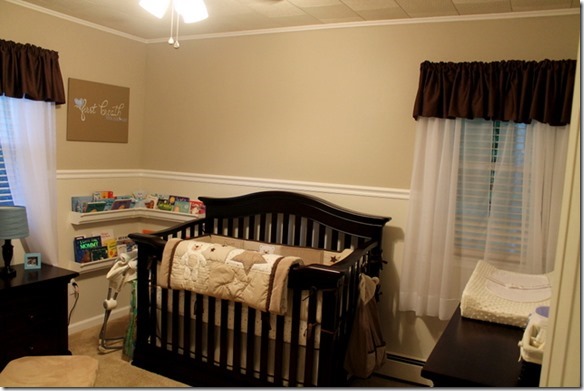 Even though Baby Tooth won’t be sleeping in it right away (he’ll most likely be with us in our room in his rock ‘n’ play sleeper or pack ‘n’ play) his permanent sleeping quarters are still just about ready for him…I just need to re-wash the cover on there now which has a nice corner filled with Cody hair. Oy. 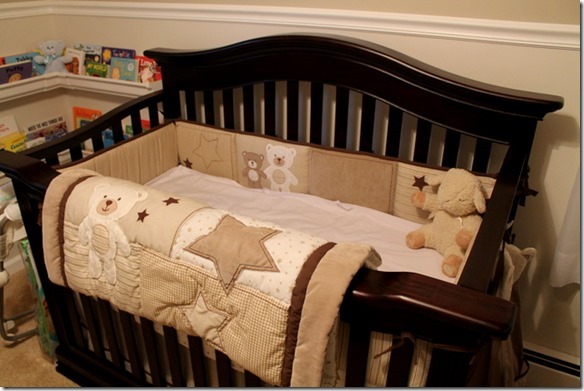 Our book corner is ready to go, with our rain gutter bookshelves that I’m so in love with. 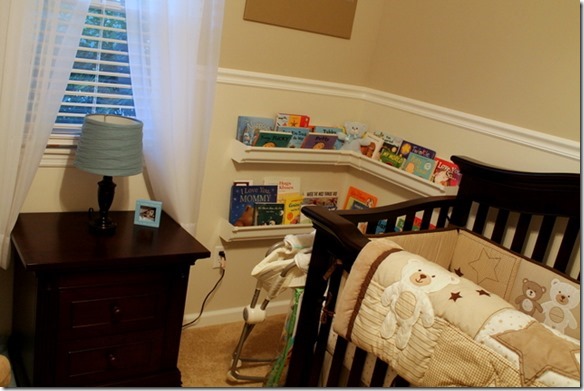 The closet is filled and certainly not organized like crazy, (nor does it have everything where I think I’ll want it), but I know we’ll find a groove eventually. 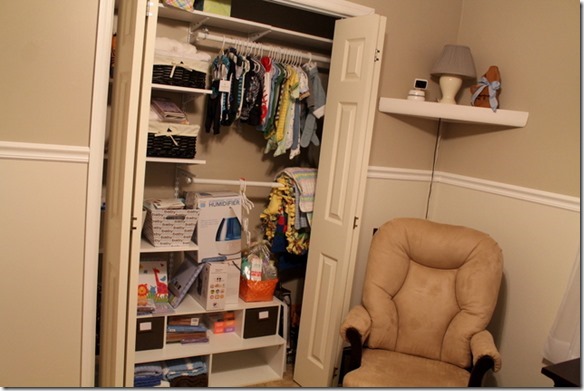 The changing area is ready to go. 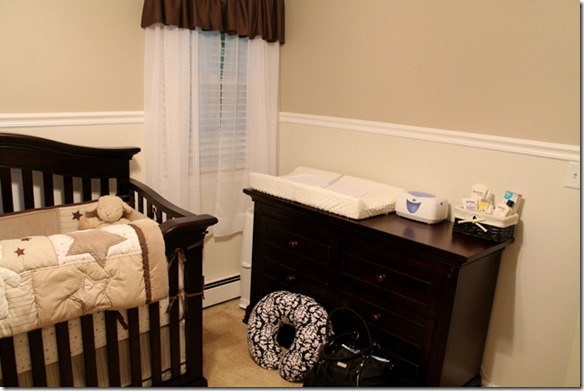 And his bag is packed! 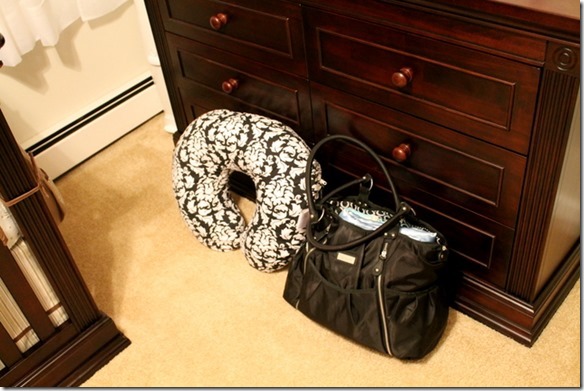 I really, REALLY can’t wait to see what it looks like once everything comes together with the pictures and wall art I’m planning on putting up. We have already booked a photographer for a hospital session (right after he’s born) and a newborn session, so I know I’ll have some great pics to choose from to add to the bare walls. I’ll be sure to show you guys down the road once they’re all up!

Looking Forward To: Getting this show on the road!! Send me some positive thoughts that Baby Tooth decides to make an appearance sooner, rather than later. Yesterday, I had three different people tell me that they thought I was going to go late and/or need to be induced and I was like, “Mannnn, reeeeeeally?! Don’t tell me that!”

Jay was hoping that he’d show up this past Sunday (he liked the idea of 7/7) but that was obviously a no-go. It’s just such a waiting/guessing game now at this point, which makes me both excited and incredibly anxious at the same time…

What do you guys think? When will Baby Tooth make his arrival??