Okay seriously…hopefully THIS is the last update I have for you all, since as of last Friday, we officially hit the big 4-0 week mark! 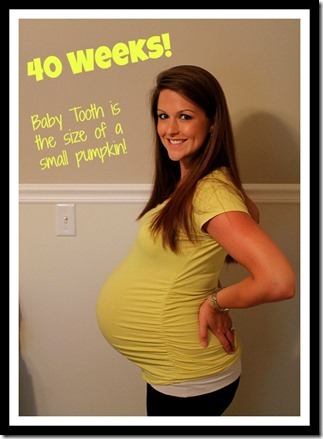 Baby Tooth is 40 weeks, 4 days today and is about the size of a small pumpkin…and apparently a pretty cozy pumpkin at that. 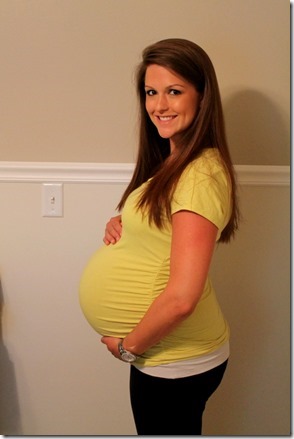 Weight gained: Not sure. I think I gained another pound after my last appointment but I honestly wasn’t even paying attention. I could so care less about that at this point.

Workouts: I’d have to say that the past three days have, by far, been the most active for me in quite a while. On both Saturday and Sunday I ended up walking for 40 minutes each, a little over 2 miles each time. Last night, I walked another 20 minutes (1 mile). My sole purpose for any extra sort of movement these days is to get little man O-U-T.

Labor Signs: I continue to have contractions and Braxton Hicks, but still nothing in any sort of a consistent pattern. Over the weekend, I did lose my mucus plug (TMI, so sorry), and at our doctor appointment yesterday we found out I’m about 3cm dilated. The doctor also mentioned that his head is basically “right there,” so hopefully he’s starting to get the hint. Although we’ll never know, I have many people (yes, I’m lookin’ at you Chels!) that my labor is going to be QUICK since I’m already that far along without any real, consistent contractions. What do I know though…I guess only time will tell!

Symptoms: A lot of the same, just a lot more prenounced…

Movement: Movement is still happening but definitely a bit slower. Poor thing must be so stinkin’ squished in there.

Food Cravings: Nothing really. Food has been hit or miss this past week. I think my mind is so preoccupied that it winds up being one of the last things on my mind.

Sleep: It’s okay. I still have no problem falling asleep most nights, but I’ve started waking up more frequently throughout the night. Mostly for bathrooms breaks, but sometimes just because I need to reposition myself to try to get comfy again.

Miss Anything? All the same stuff as I’ve mentioned before. I also miss not feeling like I’m constantly thinking/worrying about what the heck is going on in there and/or when labor is actually going to begin.

Fun and/or Interesting Things from the Week: Last Friday (on the due date), we had a prenatal appointment which included a BPP (biophysical profile). They wound up giving Baby Tooth an A+ on his “exam,” explaining that he’s still doing great in there and they had no concerns for him at this point.

Obviously, I’d SO much rather see him in person, but since he’s being stubborn, it was still nice to get to see that face of his again… 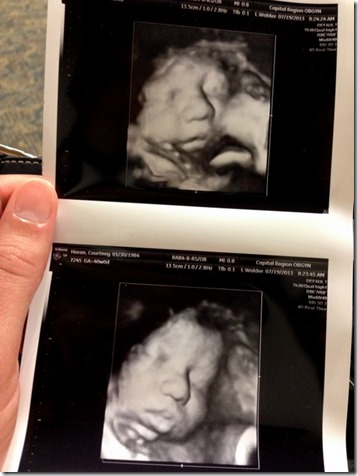 Interestingly enough, the ultrasound tech said that I actually have quite a bit of amniotic fluid (not a bad thing), so a) that’s why they’re still able to get such good photos of him, and b) I’ll probably feel a LOT of relief once my water breaks. WOO HOO!

As of Friday, they estimated him to be around 7lbs 14oz, so I’m pretty sure that I’ll be looking at a solid 8+ pounder by the time he decides to show up. But hey…if Kate Middleton can push out an 8 pound, 6 ouncer, then I suppose I can handle it.

Yesterday, we had another appointment which included a nonstress test. At first, little man wasn’t doing much of anything and then we realized that I hadn’t really eaten much of a breakfast before leaving the house. Thankfully, I had a Clif Z Bar in my bag, so after eating that, he perked right up and all went a-okay.

If things continue with no babe, I’m scheduled for another nonstress test on Thursday. Depending on how that goes, they may wind up inducing on Friday, which would be 41 weeks. I’m hoping I don’t wind up going that late, but I guess we’ll see what happens. We’ve been trying basically every old wives tale in the books this past week…maybe one of them will wind up working soon!

Belly Button in or out? Pretty much flat at this point, with a little bump that sticks out occasionally.

Wedding rings on or off? Still on, but snug in the heat.

Happy or moody most of the time: Oooof. This weekend was a bit tough. There was a good amount of tears, a lot of nerves and a lot of anxiety. The waiting game is just so hard, and when you see your due date come and go…and then continue to go…it’s just really hard to cope with sometimes. I’m so ready for this little guy to be here, and honestly, my body is just so ready to be done with pregnancy. I honestly cannot complain one bit, as pregnancy has been VERY good to me these past 40 weeks. But I’m ready.

Thankfully, I have a wonderful husband who keeps me sane, along with some fabulous family and friends. Overall, I’d still say I’m feeling happy (I’m not walking around sulking or anything like that) but I do have my occasional mini meltdowns. I’m an emotional gal, what can I say?

New Baby Items: Nada, although we did put together our pack ‘n’ play over the weekend…and if you happened to catch it on Instagram, then you probably already saw that Cody has taken a liking to it.

Seriously…WHAT are we gonna do with that little rascal?!?

Looking Forward To: I think that’s pretty obvious at this point.