Any weekend that includes great weather, delicious food, family and friend time, and some shopping is basically an A+ in my book. And this weekend had just that!

Saturday started off with a workout (PiYo Sweat, whew!) and then I was off to meet up with my college girls for brunch. We spent almost 2-1/2 hours chatting away and catching up (we hadn’t all been together since Eileen’s wedding in October) which was really nice. It’s sad that we don’t get the opportunities to get together as much as we used to, but we still have a great time when we are together!

After brunch, I took care of a couple errands, including returning a pair of the shorts I got from the LOFT (not the denim ones, the coral ones – they just didn’t fit right), picking up a few things for Lucas at Carter’s, and making a “quick” stop at Old Navy. 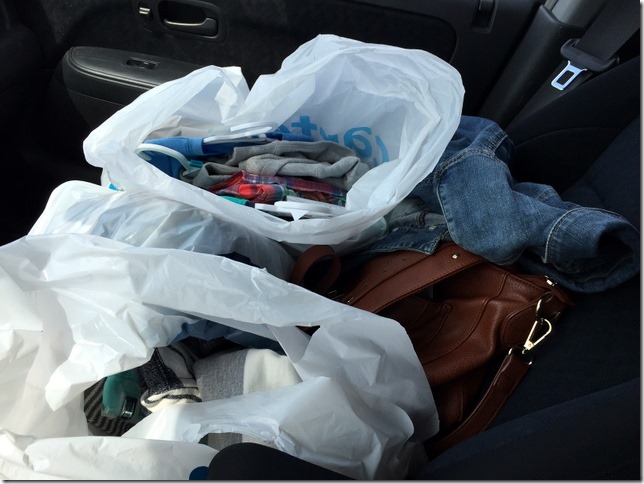 I had $60 in super cash that would have expired on Sunday, so I wanted to make sure I used that up. 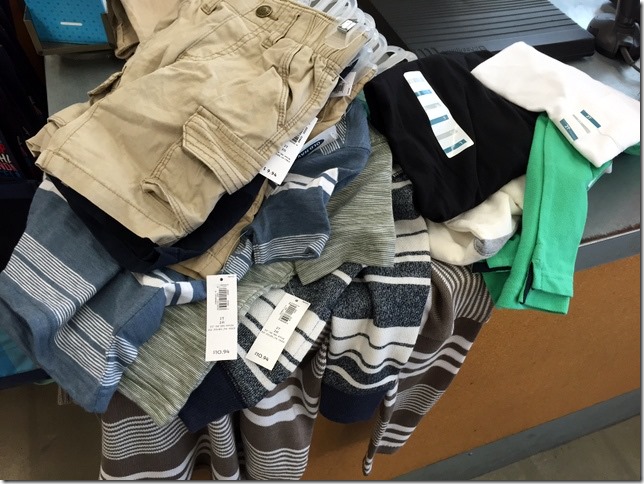 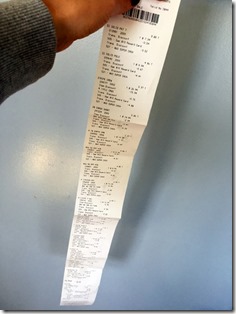 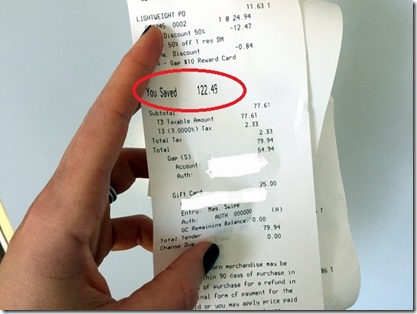 I’m pretty positive I was walking out the door with an extra skip in my step. As for the goods? Jay needed a couple things, so I grabbed those for him. I ended up getting this Women’s 3/4 Sleeve Lightweight Sweater and then this Men’s Striped Sweatshirt for myself, too. Yeah, it’s mens…that means it’s going to be 10x better in the coziness department!

Lucas, however, is the one who really made out like a bandit, since probably 85% of what I bought was for him. In case you’re interested in what he scored…

After my shopping was finished, I rounded out my errands with a quick stop at Starbucks. Iced grande nonfat caramel macchiato, for the win. 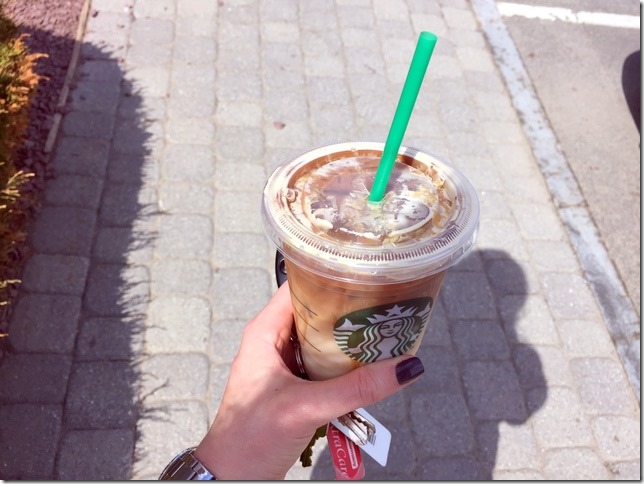 And not only was it free since I earned a reward on my card, but I swear the barista gave me extra caramel. AH-mazing.

Lucas was still napping when I got home, so I spent a few minutes catching up with Jay. Turns out, he and Lucas had a great morning together. 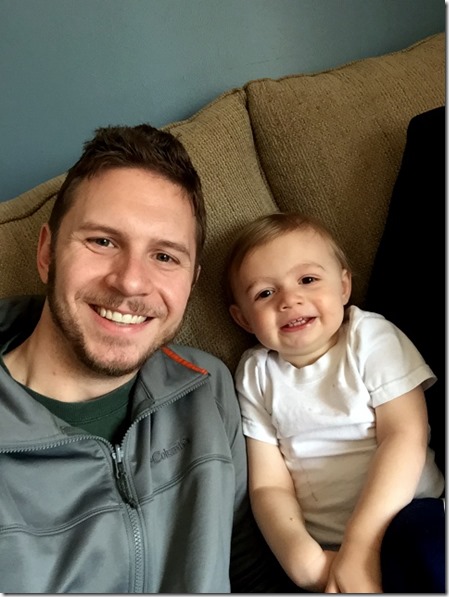 After chatting a bit more, I told him that I thought it’d be a perfect night to head out for an early dinner, the three of us.

I’ll be honest…we really don’t bring Lucas out to restaurants very often, and I wish we did. I see other parents do it all the time like it’s nothing and I think, man, why is it so hard for me? Is it because my child is SUPER energetic and doesn’t sit still? Or am I just using that as an excuse for my insecurities? Honestly, I think we’ve both been so overly concerned about him acting up or misbehaving, that we’d usually rather not worry about it (plus it saves money, so there’s that). But since I really do want to get Lucas more acclimated to being out in public places like that, I’m hoping we can start to all feel more comfortable going out as our little fam of three.

So thanks to a coupon and a gift card, we hit up Ruby Tuesday just before 5pm…along with all of the other toddlers and senior citizens. Perfect! 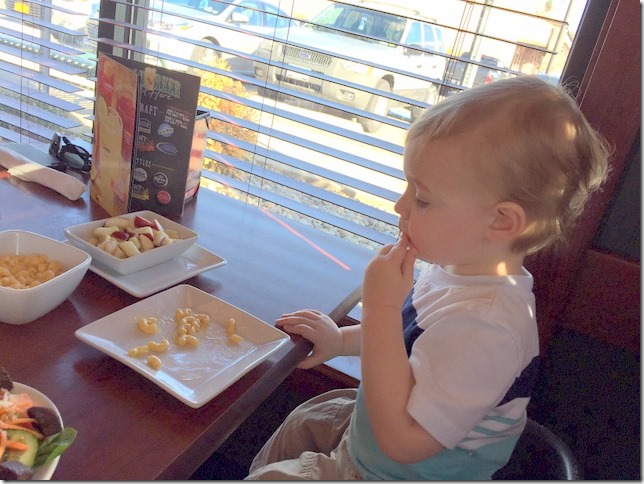 And you know, he was totally great the whole time we were out. Like, I couldn’t have planned it any better. We sat in a back corner (perfect), he sat in the booth fine (I knew if we did a highchair he’d immediately want to get out), stood up occasionally to say “Hi!” to those passing by, flirted like crazy with our waitress, and ate every last bite of the mac and cheese and apples we ordered him (this is SO rare lately you guys…). No whining, crying, or any of the other toddler stuff we tend to see happen quite often. Plus, we didn’t even need to break out the toys OR phone apps (we were prepared…and yes, I would have let him sit with my phone watching Disney in order for us to finish our meal if I had to). 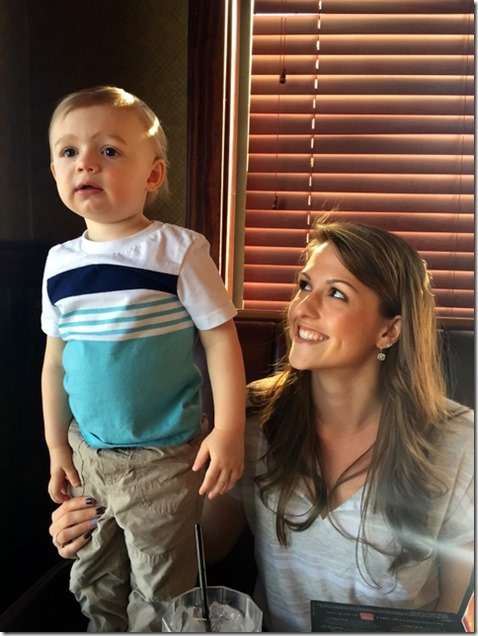 It was a great dinner out, and definitely left us feeling like we could tackle this more often.

Oh, and as for dinner? Delicious! I’m forever and always a fan of the Ruby’s salad bar, and I ordered one of the salad bar combos that came with baja chicken tacos. 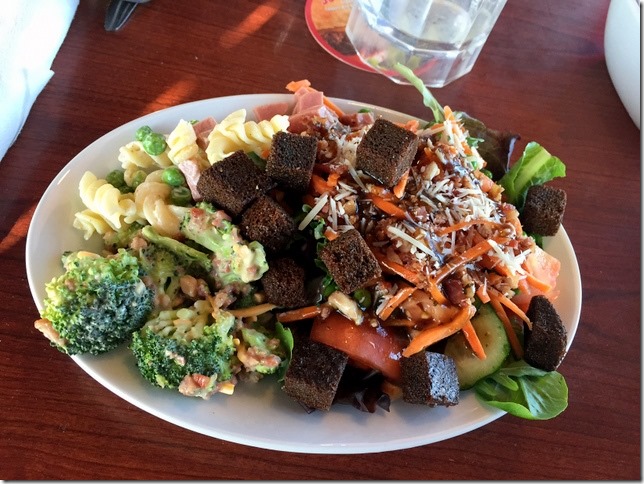 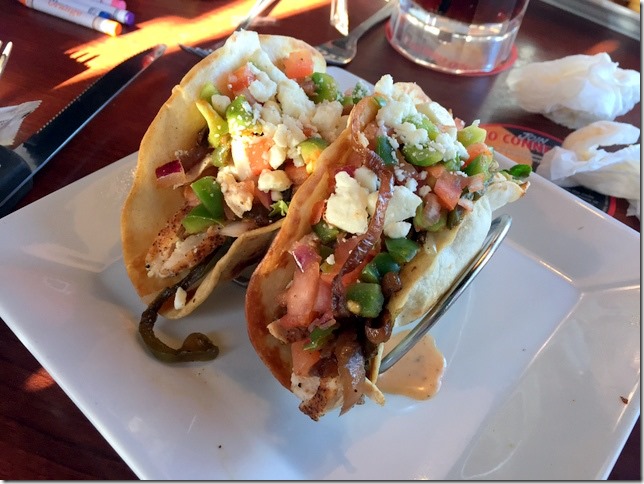 They tasted so incredibly fresh, and the flavor was fabulous. I would order them again in a heartbeat.

Saturday night included some TV time (we got caught up watching a 2 hour 20/20 special) and cookie dough ice cream. Doesn’t get much better than that. 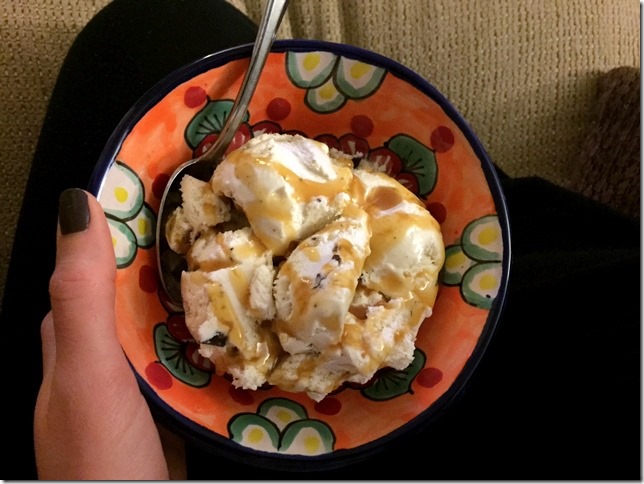 Sunday was low-key but great. Lucas slept in until almost 9am, so I took advantage of the quiet time and made my coffee while doing some meal planning for the coming week. Cody also took advantage…little snugglebug that he is. 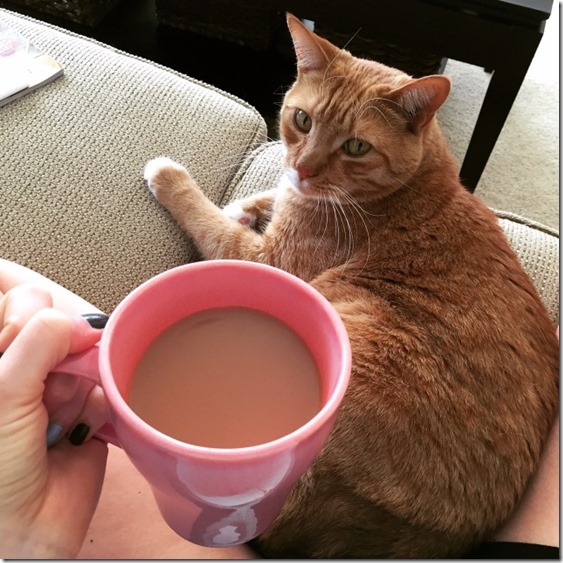 And he does seem to be feeling much more like himself these days, so thanks to all of you for the well wishes!

It was a nice, sunny day and Jay offered to do the grocery shopping (ok, that’s a lie…I sort of forced him into it…he’s the best) so Lucas and I spent the morning outside. 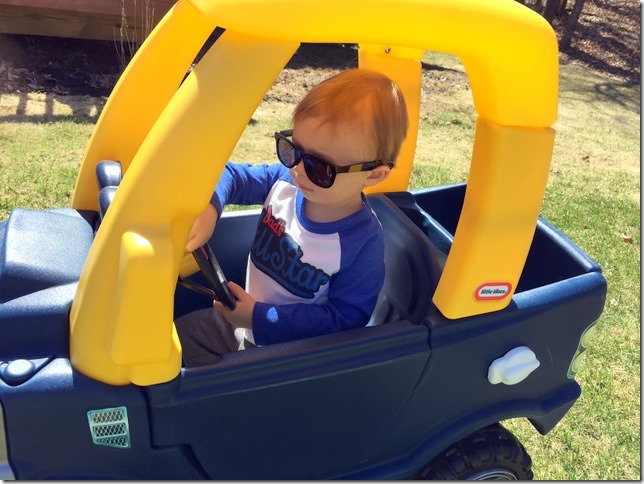 You like his new shades? I got ‘em for him on Saturday at Carter’s. They’re too big, but I love it. And so did he. 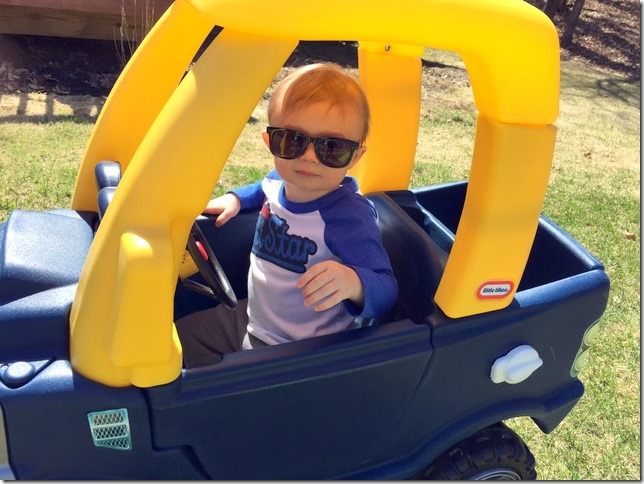 We swung on the swing, played all in the backyard, and even played with some chalk. He’s getting pretty good at writing his name, isn’t he? 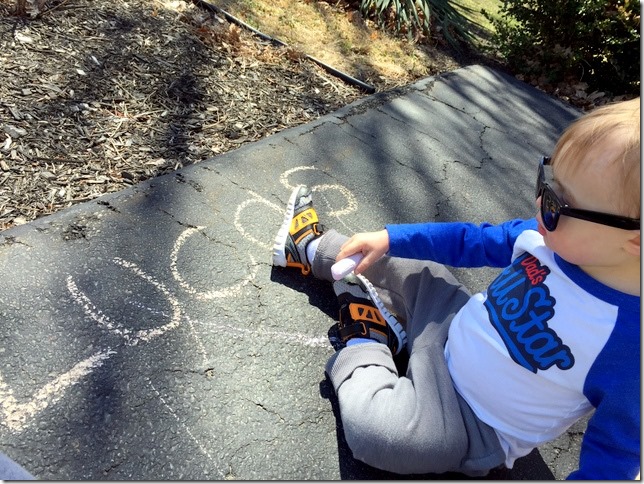 I took care of some blog stuff out on the back deck while Lucas napped, and the rest of the day was either spent doing “Sunday stuff” inside, or enjoying the weather outside. It really was a great weekend!

And now, here we are at Monday again. Oh, so soon.

I hope you guys all had a great weekend! Do anything fun? Oh, and for the moms and dads out there, I’m curious…how do you feel about bringing your little ones out in public? Is it no big deal for you? Do you struggle with it? Any tips?