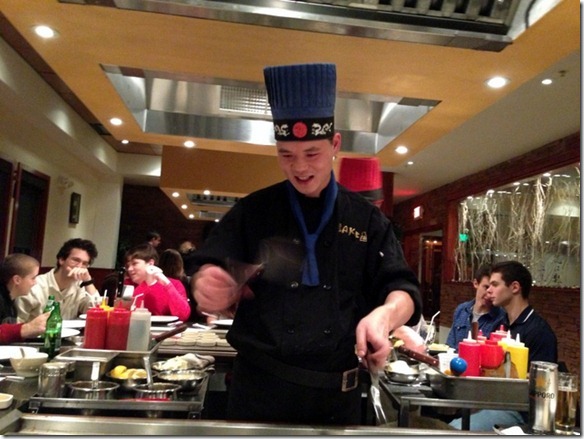 Last night was a birthday celebration night – since my brother’s birthday was on Friday and my dad’s is on Monday – so the five of us went out for dinner at Sake. 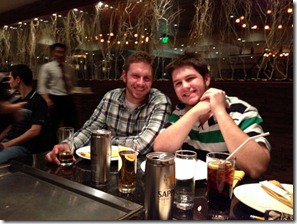 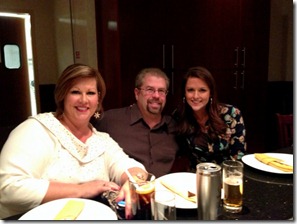 Of course, our meals started with the usual salad and soup – both were good, but they never really “wow” me. 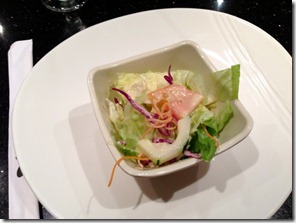 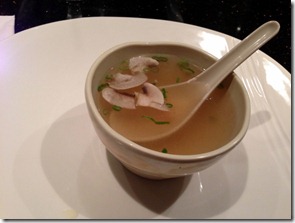 A few of us also decided to get some sushi; I wanted my parents to try some, but since they’re not usually sushi people, I figured I should go with something simple so I got a sweet potato and avocado roll. 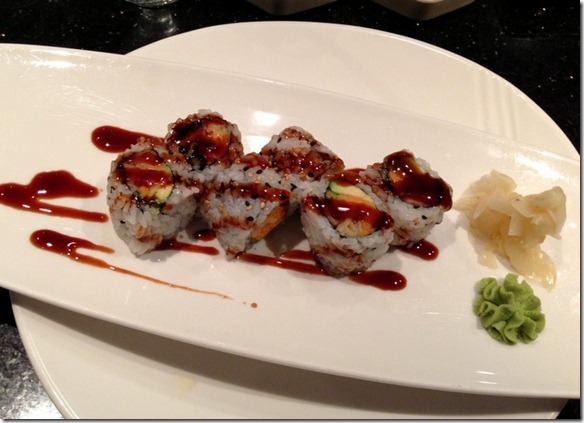 Absolutely AMAZING. Seriously…that thing was so good. I so wanted more than just three pieces of it.

Shortly after the sushi rolls came out, it was time to get the entertainment underway! There was sake all around, plenty of laughs and cheers, and of course, the flaming onion volcano. 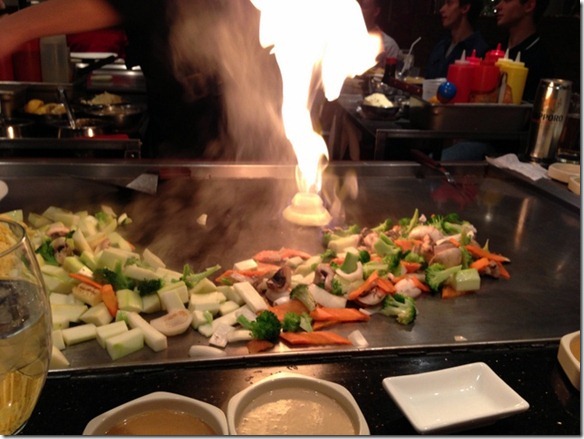 Last night was actually my dad’s first experience with hibachi and I’m pretty sure he enjoyed it, despite the fact that he was super apprehensive about going (he’s a slightly picky eater and didn’t quite understand the whole “making food in front of you” thing.)

To start, we got our rice, noodles, veggies, and shrimp; extra shrimp for me since dad doesn’t eat ‘em. 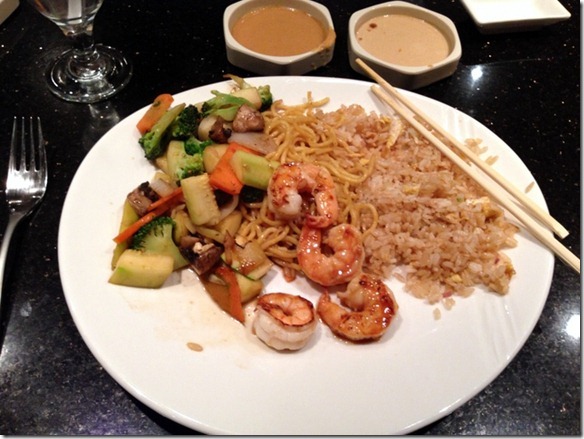 Then we got our main courses: I went with the salmon and filet mignon. 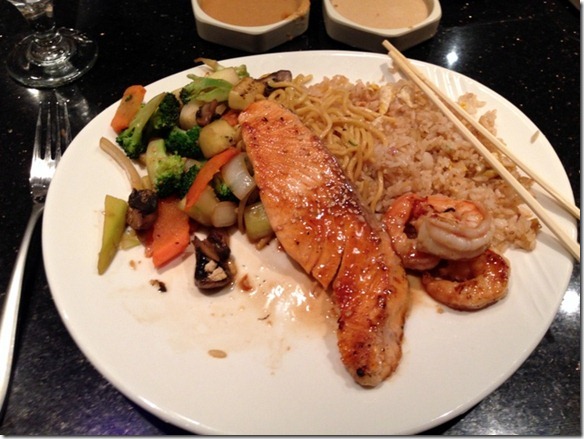 Both of them were great, but I think I liked the filet best. 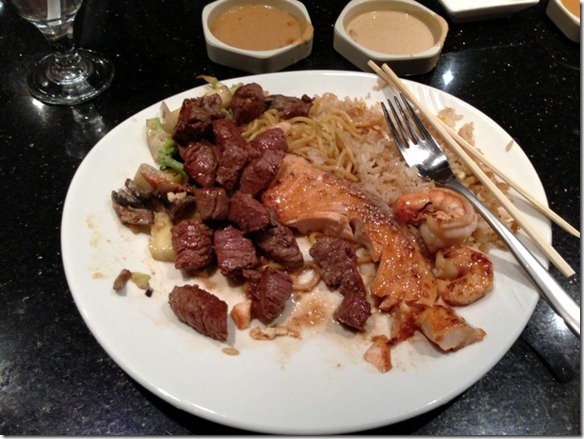 Unfortunately, there was a LOT of food and I just couldn’t manage to eat it all. FORTUNATELY, they had to-go boxes… 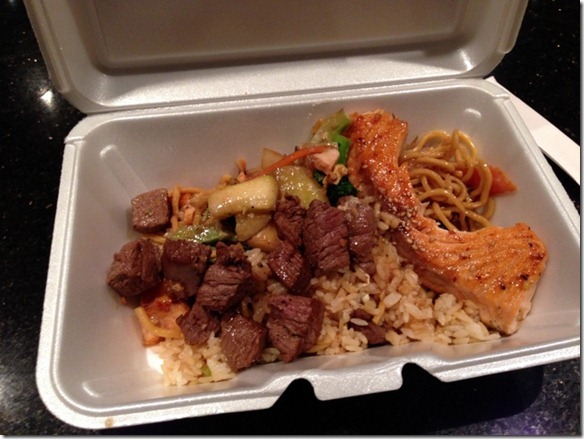 So now I have leftovers for later today.

Since we had two birthday boys in the house, they got presented with some sort of fancy ice cream dish. 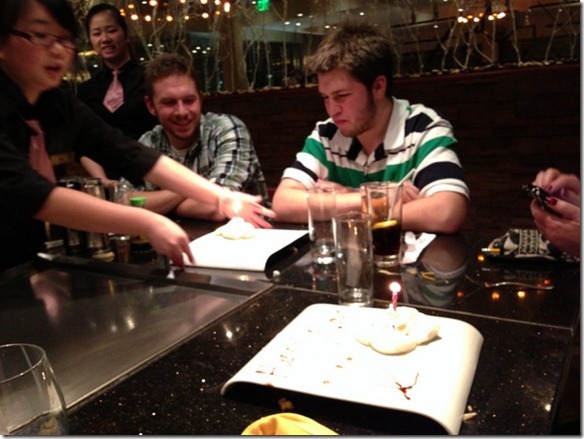 None of us could quite figure it out, but it almost tasted like the ice cream was encased in some sort of marzipan maybe? 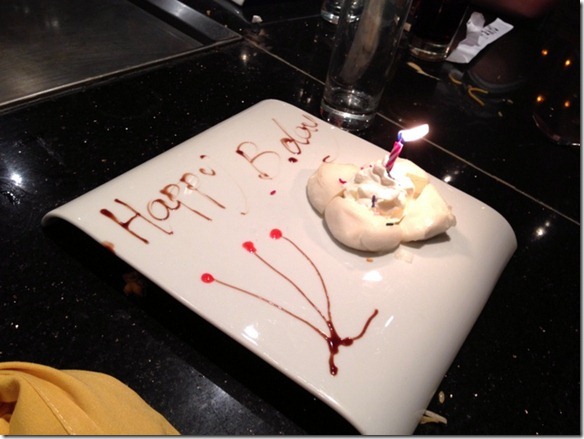 Whatever it was, the couple of bites I stole from dad were pretty darn tasty.

After dinner we said our goodbyes, Jay and I headed back home, put on our cozies, cuddled up on the couch, and decided to order the movie Ted from On Demand. It was pretty funny and slightly vulgar.

This morning, I enjoyed waking up without an alarm (back to the real working world tomorrow – eeeek!) and worked on some of my paperwork before making a delicious breakfast. 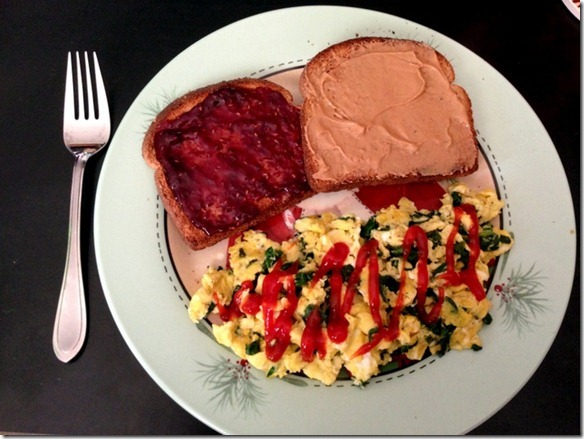 Scrambled eggs with spinach, and toast with PB&J. Great way to start the day, if ya ask me!

Now today, I’m going to work on getting everything I need ready for the week ahead…which I’m sure won’t be everything, but I’ll give it a shot.