Happy Wednesday from the Outer Banks! 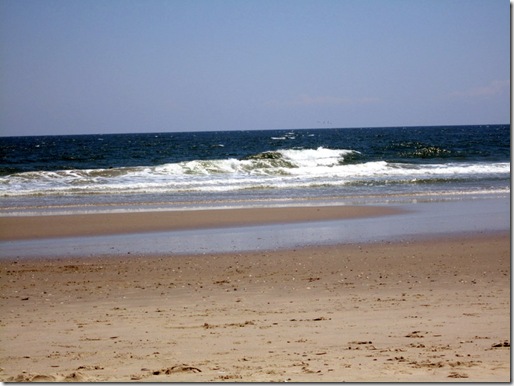 Since arriving down here in OBX, I’m actually pretty pleased with the amount of exercise I’ve squeezed in. Before leaving, I told myself I wasn’t going to go out of my way for exercise; if I was in the mood for it, great. If not, no big deal.

Well this morning, I woke up earlier than most of the other housemates, so I strapped on the sneaks and headed out for another run.

I have no idea how far I went, what my pace was, or really even how long I was out for, since I didn’t really pay attention to what time it was when I left. All I do know is that I, once again, made sure to map my run around a certain pit stop. 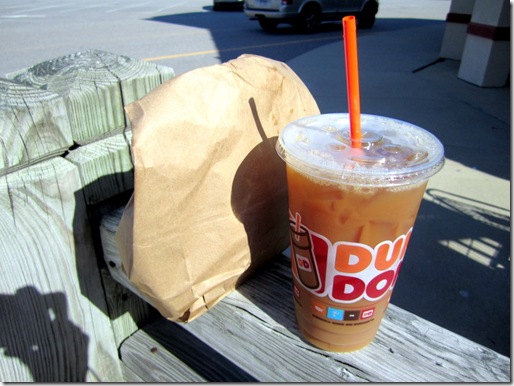 You know what they say: “America Courtney runs on for Dunkin’!” 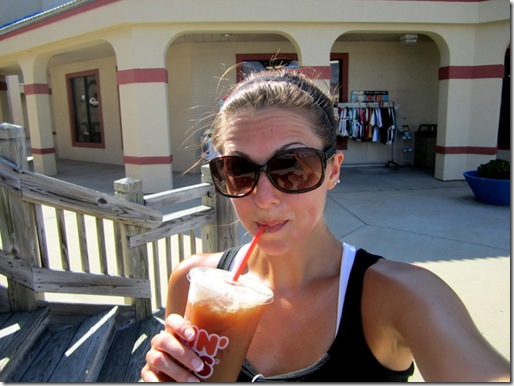 Before diving head first into my breakfast, I actually came back to the house and busted out a mini strength workout. I had no rhyme or reason as to why or what I did, but here’s what it looked like:

Outdoor Patio / Do Anywhere Workout (I did the whole circuit through, 3x)

Whew! By the time I was finished with that mish-mash of moves, I was more than ready to dig into my morning meal. So you guys want in on the mystery bag from up above?

That, my friends, is a French Toast bagel from Lighthouse Bagels. 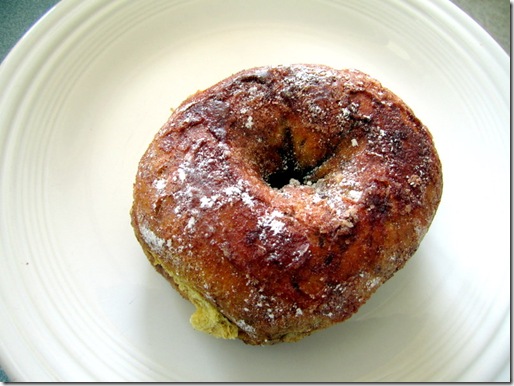 And that, my friends, is a bagel that was about the size of my head. 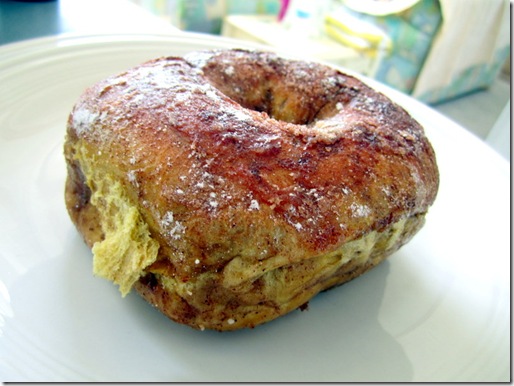 I’m really not kidding you all when I say that this has got to be the best bagel on the face of the planet. Soft, chewy, with the crunch of a sugary coating and all the flavor of a big ‘ol serving of french toast. 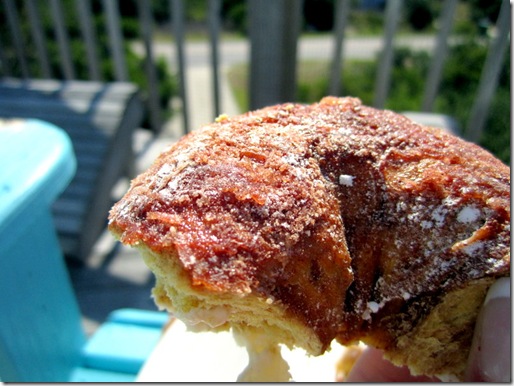 And as if it wasn’t already good enough, this bad boy got topped with a smear of apple cinnamon raisin cream cheese. 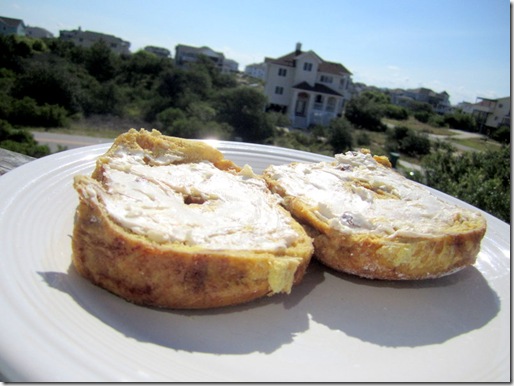 This breakfast, albeit slightly more indulgent than usual, was out.of.this.world. I have been looking forward to it, and planning it, ever since we got down here, and believe it or not, it actually kept me full for almost five hours. Talk about staying power! 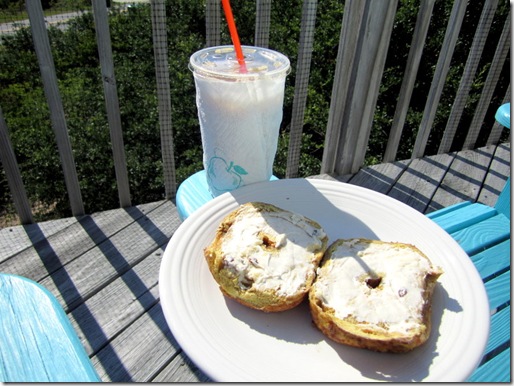 Which is a good thing, since right after eating, we suited up and headed down for another afternoon at the beach. 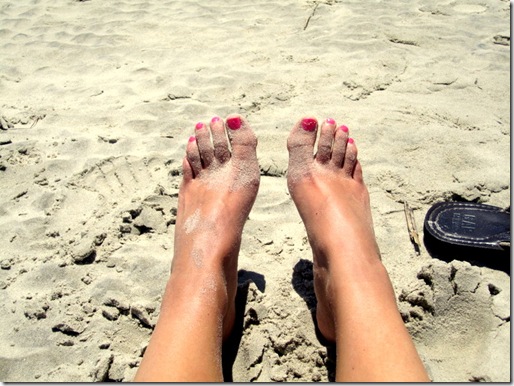 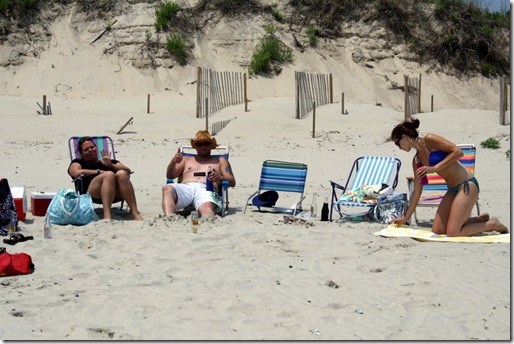 Gosh, I am so so so happy to be down here this week; especially seeing as though we originally were not going to make it.

When Josh & Erika (who plan the trip every year) first approached us in February and asked us to go, we had to decline due to the fact that this particular week is actually the second to last week for schools in New York. 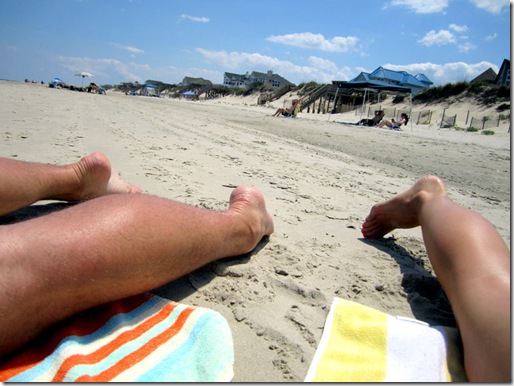 Seeing as though I was teaching at the time, there would have been no way that I could have taken the time off. However, once the whole job loss thing happened, Josh & Erika once again offered to allow us to tag along on the trip. 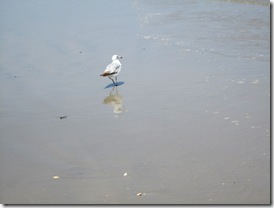 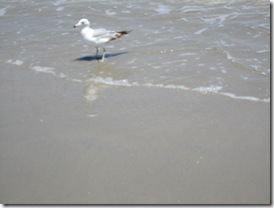 It’s been so nice not only for me, but for Jay as well, to just get away for a bit and escape from the everyday worries and trying to figure out what my next step is going to be. It’s been stressful for both of us, and being able to spend some quality time with good friends while relaxing on the beach I think was just what the doctor ordered. 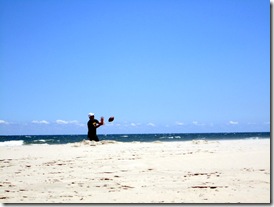 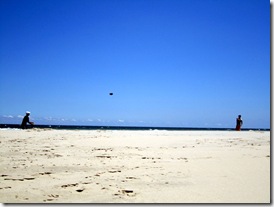 Granted, since we were a last minute addition to the vacay, we actually don’t have our own bedroom in the house. We knew this going in, but totally didn’t care, so our bedroom is what you see here (yes, Jay is really napping). 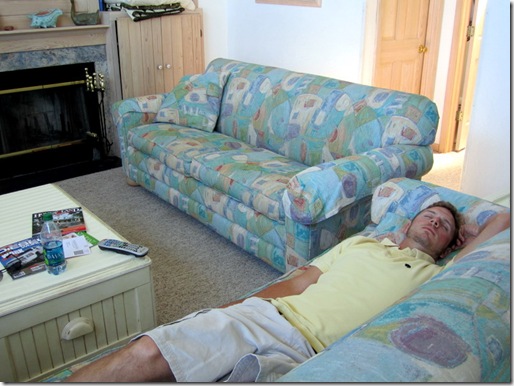 Hey, for a week at the beach, I can totally deal with sleeping on a couch and living out of duffle bags for a week. 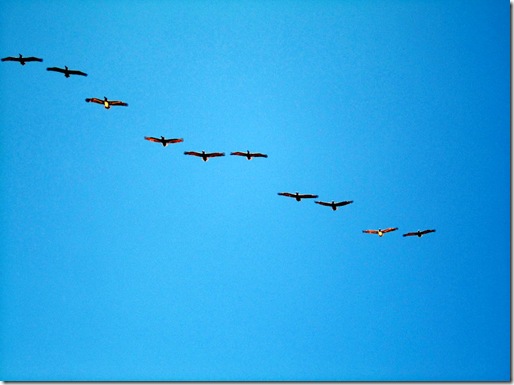 I have a feeling we’re both going to come back home feeling much more refreshed and renewed…and start our hunt for a slushy cart.

Can You Pick The Fake?

A few weeks ago, I saw a fun little game over on Chelsea’s blog, and I thought it would be fun to do the same, OBX-style!

This is, I mentioned before, our third year coming down to the Outer Banks, but the first year we came down, we had some rather interesting events take place. So for the game, I’m going to give you four scenarios: three of them are real, and one of them is fake…

1. Halfway through our first trip to OBX, I had to get a flight back home to NY for a job interview. Jay drove me up to Virginia to catch my flight, I stayed home overnight, flew back down the next day, Jay came back to pick me up in Virginia…and I never got the job.

2. While driving back from dinner one night, there was some crazy lightning off in the distance, so we decided to stop to take some pictures. A couple minutes later, we realized we were about 45 seconds away from getting stuck in the outskirts of a massive tornado that was approaching Corolla. The tornado actually did some serious damage in the areas surrounding us, and our car continued to get pummeled with hail the whole ride back.

3. The first day of our vacation, I accidentally mistook my SPF 15 lotion for someone else’s tanning bed, zero SPF lotion, and proceeded to spend the entire day at the beach. I got so badly sunburned that I had to stay in the house and out of the sun for four out of the six days we were here.

4. One night, our group decided to take a walk on the beach. As soon as we turned our flashlights on and shined them down the sand, we immediately found ourselves face-to-face with hundreds upon thousands of crabs.

It’s so fun to think that three of these are actually true!

Now it’s your turn to guess:

Don’t forget to make sure to enter my Almondina Cookie Giveaway! I’m so glad to see you guys are excited about the little goodies as I am!