Hello, hello! How’s everyone doing? I feel like the internet has been a bit quiet the past couple of days and that’s awesome. Most likely, it means that people are out and about doing things besides sitting at the computer. Don’t get me wrong, I’m (admittedly) an internet and social media junkie, and I LOVE when you all come to visit! But I think it’s just so important to take some time to step away from a bit and remember to live off the grid for a bit.

That said…I’m clearly not taking my advice, and I’m hanging out with all of you here today, so take that with a grain of salt. Bahaha.

So, believe it or not, we are actually 100% de-Christmased in our home. We all spent a quiet day at home on Sunday and since we had the time (and really needed to clear up some space) I just decided to pack it all up for the season. 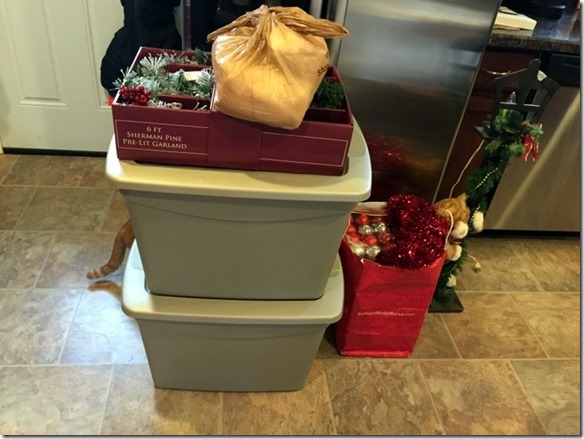 Until next year, Christmas décor!

Thankfully, now that the corner of our living room is cleared of our tree, that means that Lucas has the entire corner to play (aka, mom and dad have the whole corner to somewhat hide and stash all of his new toys). 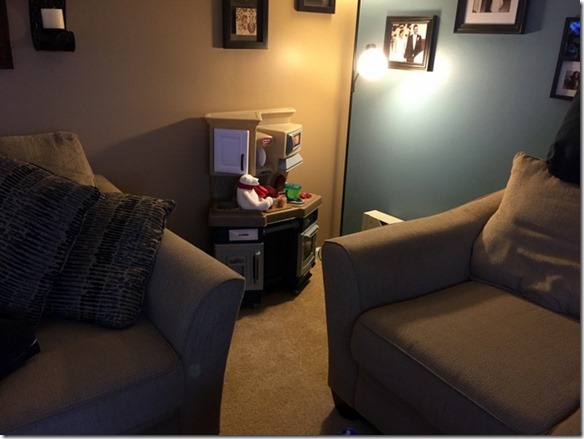 Want to know what else we started doing this past weekend?

I think the best way to describe it would be to say that we’ve been completely binge watching Orange is the New Black. We got a gift card for Netflix for Christmas, and after I asked you guys on Instagram what our “must watch” shows should be, this one was clearly one of the winners. So far we’re up to episode 8 of season 1 and I just can’t get enough! We’ve watched 2-3 episodes a night for the past three nights, and I’m sure there will be at least another episode watched tonight (it’s Monday night as I’m typing, but I’m sure Tuesday will include more, too). I’m telling you. Ob-sessed. Gahhh!

Once we’re done with this series (which I’m sure isn’t going to be long) I think we’ve got House of Cards up next. Everyone’s telling me it’s a must-watch! Any others you guys recommend??

Yesterday was also back to work for the first time in almost a week. It was fairly quiet, which was a nice way to ease back in to working, and of course, a little Starbucks breakfast never hurts either. 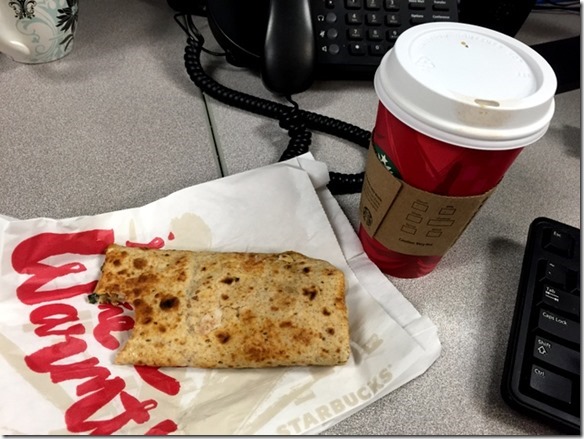 Christmas gift cards, for the win!

It was nice to have a somewhat normal day of eating again too, which included a delicious salad filled with some leftover chicken, steak, Havarti dill cheese(!!!), and veggies from the weekend 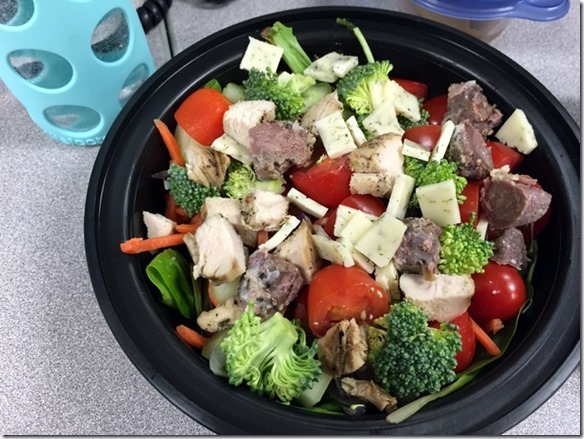 And one of these Yoplait Cinnamon Roll greek yogurts which, I just have to say, are freakin’ DELICIOUS. 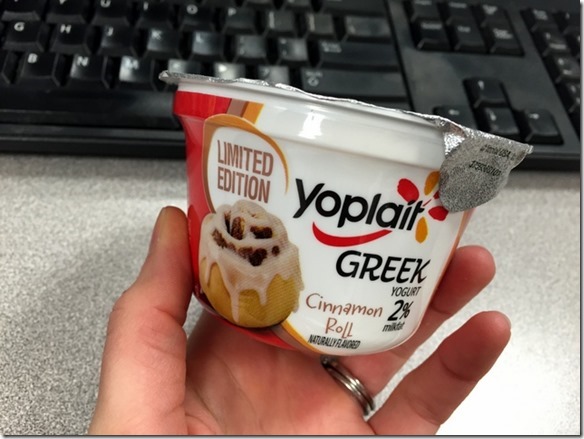 The company sent me some to try about a week ago and I can’t get over just how much they taste like a cinnamon roll. Absolutely incredible (plus I love that they’re 2% – so much creamier!), especially with some granola sprinkled on top. Yum!

Not much to share on dinner, since I ended up grabbing some random leftovers out of our freezer to heat up quickly. It was my attempt at avoiding the call to Jay to ask him to pick up a pizza on his way home from work, and hey, it worked. Although the pizza would have been so much better.

Mr. Lucas skipped his afternoon nap (they’re hit or miss these days) and was a little crabby in the evening before bed, so it called for a little iPad time. 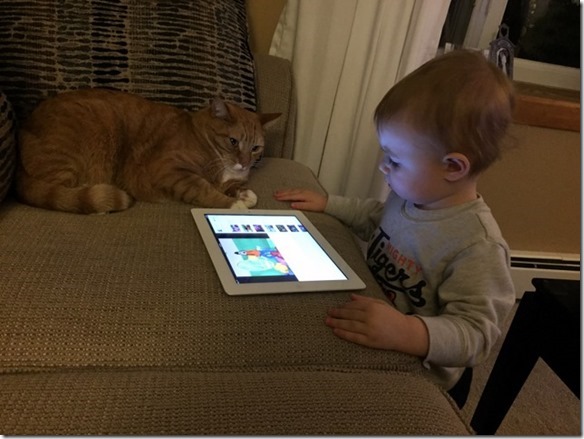 Hey, don’t judge…sometimes, a few minutes of TV time saves the sanity of everyone in the family. Except for poor Cody. He looks totally un-amused, doesn’t he? Thank goodness he’s so good with the little human that came and invaded his space.

So the super news is that this work week should be a fairly easy one. I have tomorrow off, working from home Wednesday, off Thursday, and then just need to make it through Friday. I think I can, I think I can!

I’m hoping I’ll be able to get up early for a workout tomorrow, too. I had planned on it yesterday morning, but Lucas had other plans during the night (damn that pacifier, we need to get rid of it! Any tips?! It never, ever used to be an issue…) and wound up waking us up twice…making a 5:15am wake up time a bit ol’ hellllllz noooo. Fingers crossed for today.

Alright my friends, I’m off! Hoping I’ll be able to check back in with you all tomorrow, but if not, have a fabulous New Years Eve!