Apparently, I was feeling a little wordy this morning as I got working on this post, so I’ve got lots to talk about today. Especially down towards the bottom of the post, but we’ll get to that in a second.

I will say first that this week has really been a pretty darn good week so far. Work has been fairly even-keeled…not too busy, not too slow. We haven’t been too super busy in the evenings, which has been nice. We got some great Baby Tooth updates. And, for whatever reason, I keep finding myself in this calm, content state of zen. It’s sort of weird, actually. I’ll just be sitting at home and suddenly feel so relaxed and happy (despite the fact that I feel like we still have about 1,001 things to do), and I start thinking about all of the things that I’m so thankful for in my life. This is super out of the norm for me…not to say I’m usually a spastic maniac…but it’s just, I don’t know. Different. Is this a pregnancy thing? If it is, I’ll gladly take the positive side effect.

But back to the food, since that’s our usual talk around here. Yesterday included some pretty good stuff, starting with breakfast. 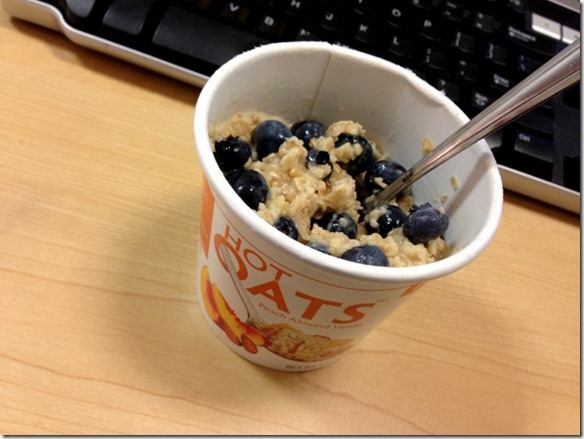 Love Grown Foods hot oats (now available on Amazon!) in peach almond vanilla mixed with blueberries. Always a great choice for when I’m running late out the door in the morning.

Part of the reason breakfast had to be quick and easy was because I took a little more time on making my lunch yesterday morning. 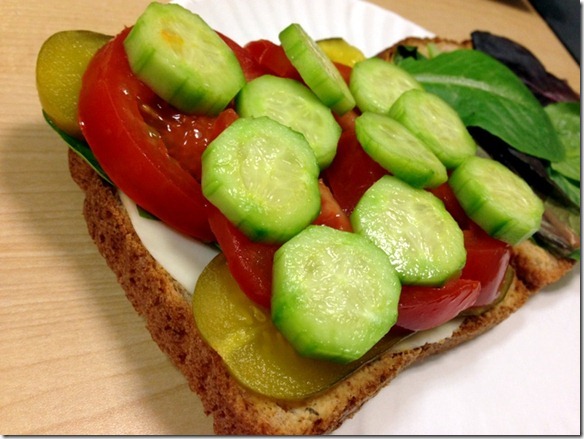 As I was getting ready for work, I realized I was reeeeeally in the mood for a big veggie sandwich. So I slathered two pieces of whole wheat bread with some sun-dried tomato hummus and added mixed greens, provolone cheese, pickles, tomatoes, and cucumber slices.

And in order to prevent the sammy from getting too soggy, I kept the pickles, tomatoes, and cucumbers in a separate baggie and added them once I was ready to eat. It was perrrrfect. 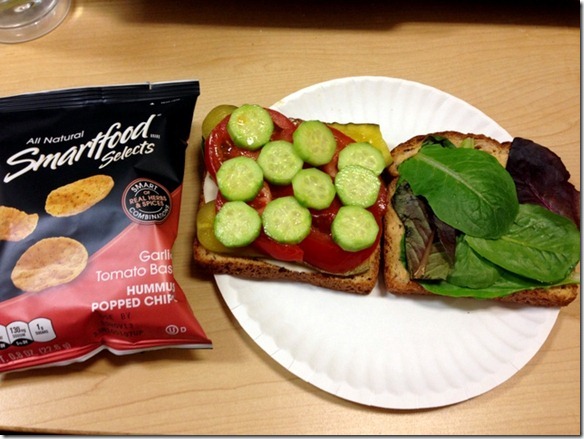 I was feeling suuuuuper hungry around lunch and I knew that the sandwich alone wasn’t going to cut it, so I also managed to grab another bag of the hummus popped chips that I raved about recently.

Unfortunately, as good as that lunch was, I felt like it barely made a dent in my hunger (apparently I was making up for Wednesday??). I had to run out quickly after eating, and while I was out I found myself with a sudden, strong urge for a vanilla ice cream cone from McDonald’s.

I know…how odd and random, right?

Thankfully, there’s a Micky-D’s right down the road from our office… 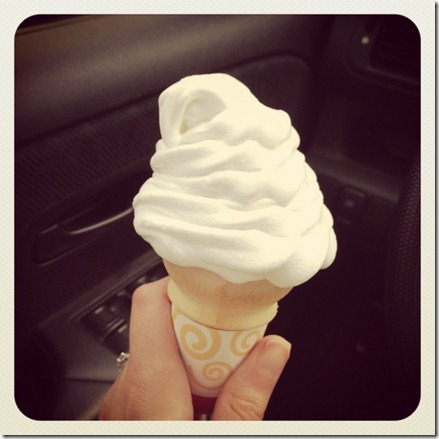 So I pulled through the drive -thru, ordered my $1.00 cone, and thoroughly enjoyed the mini guy on my drive back to work. It toooootally hit the spot. Like, I can’t even begin to explain. :)

There were a few other snacks scattered throughout the afternoon, but none of them are nearly as exciting as the dinner Jay and I wound up throwing together last night. Apparently, yesterday was a day of major “gotta have it” cravings, because around mid-afternoon yesterday I could NOT get pasta with alfredo out of my head. Literally…I thought about it all afternoon long.

Thank GOODNESS we had all of the ingredients on hand to make my favorite skinny alfredo sauce. 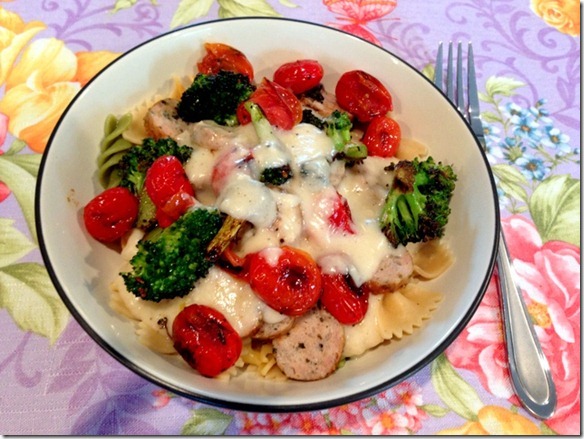 To our bowls of pasta (a random mix of veggie rotelli and regular farfalle) we added some sliced chicken sausages, lots of alfredo sauce(!), and some sauteed broccoli and grape tomatoes. 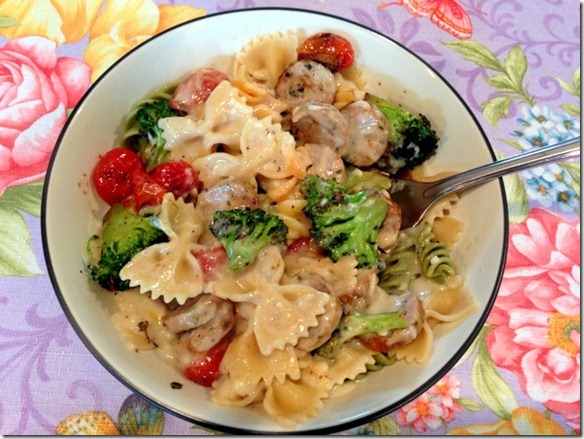 And I must say, I’ve REALLY been enjoying all of the food I’ve been eating lately. It feels SO good to just eat what I want and not have to worry about how “bad” it is, or any other garbage like that, which used to inundate my brain on a daily basis. I recently found myself looking through a few old blog posts (much older, back in 2010-2011) of mine and some of the things I came across really made me cringe. The things I would say…the way I somehow felt I had to explain food choices if they weren’t “perfect”…the foods I’d eat (or lack thereof)…the extreme exercise I’d do following a day of eating a “treat.”

It was really disappointing to read. But at the same time, it was incredibly eye-opening, and I’m so thankful that I have that documented to look back on now. To see just how much things have changed…and to me, I totally see those changes for the better. Was I thinner? Yes, of course. Was I happier? Not really.

For some of you, maybe you think my eating choices aren’t as “healthy” anymore. If that’s the case, no harm, no foul. We all have our own ways of approaching food and eating, and if our eating habits don’t necessarily mesh, then that’s okay. No judgement here.

I know I’ve mentioned this briefly a couple of times on the blog (and I know I still need to really gather all of these thoughts and share them with you guys…this is just a little snippet that I suddenly found myself thinking about), but I’m really excited to continue this new relationship with food that I have, well beyond pregnancy. Granted, I’m sure some things will change once the pregnancy is over (I’ll be shocked if my cheeseburger obsession continues, but who knows? ;) ), but I’ll take that as it comes.

To me, life is just wayyyy too short to spend all day worrying about food. I’d rather just enjoy it (and share some of the good stuff with all of you along the way).

What do you guys think?