Happy New Year!!! Here’s to the start of a fabulous new year/decade!

Anyone else feel like they’re still trying to work their way out of the Christmas/Holiday fog?

Despite the fact that I’ve already been back to work, the week between Christmas and New Year’s Day is always a bit weird. Kids (and me) have spent multiple days in pajamas, schedules are nowhere to be seen, I hardly know what day it is, and I’m still trying to recover from all of the excess sugar and alcohol the last couple of weeks have brought. All totally worth it, but whew! I’m ready for some more routine. And maybe a few extra vegetables.

But I will say, we really had a totally awesome Christmas season this year. And I know I’ve already shared a few fun activities we’ve enjoyed, so I’ll pick up where I last left off!

First up was Christmas Eve. In an effort to bring some positivity to what is now a bit of a somber day, since it’s when Jay’s dad passed away 4 years ago now, I decided to try to start a new tradition with Jay, the boys, and my mother-in-law. And I’d suppose my attempt at this tradition was twofold, because I also really wanted to start teaching the boys that Christmas is about so much more than just what’s under the tree.

So on Christmas Eve morning, we set out on a Morning of Kindness. 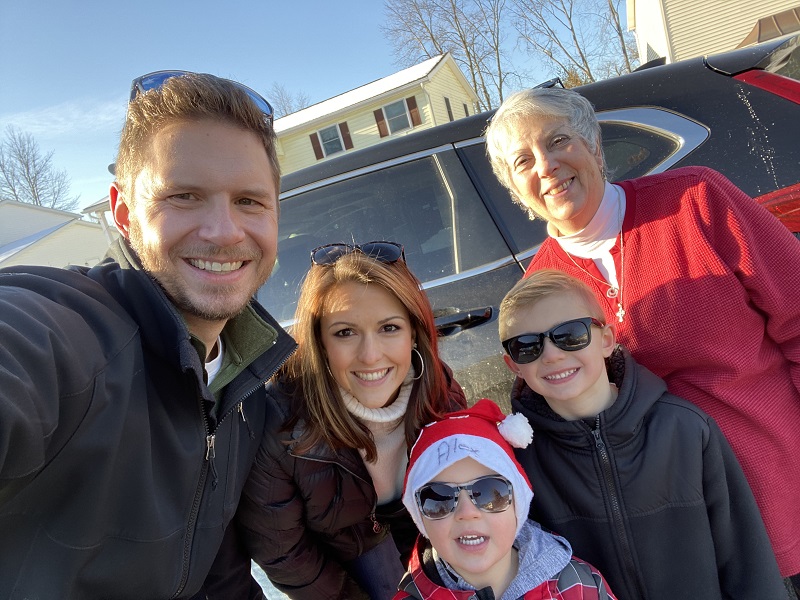 I had heard about this event a few weeks prior, and thought it would be the perfect opportunity to get the boys involved. I looked through the list of participating organizations and decided to choose two that I felt a closer connection to.

The first was Brinley’s Bags, which is actually run by someone I know from high school and our local school district. She started the organization after her daughter had spent a great deal of time in the NICU after being born prematurely, and now her organization provides care packages created especially for families that have little ones in the local NICU. 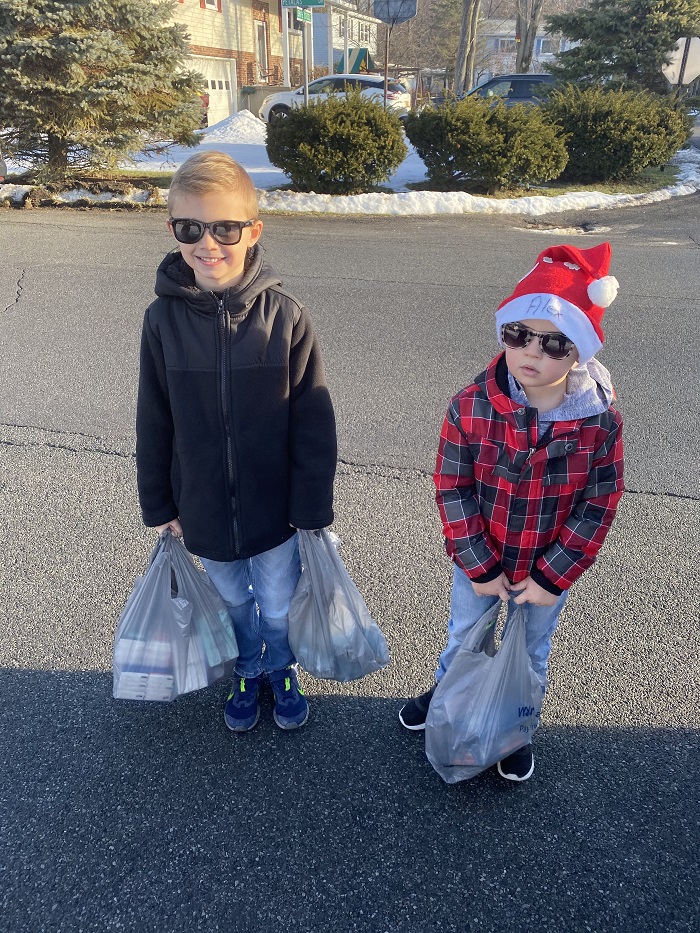 We brought over a bunch of stuff from their wish list, and the boys both had a good time being able to go through and help sort the various items into their appropriate bins. I thought this was SO great for them, because it allowed them to feel more involved! 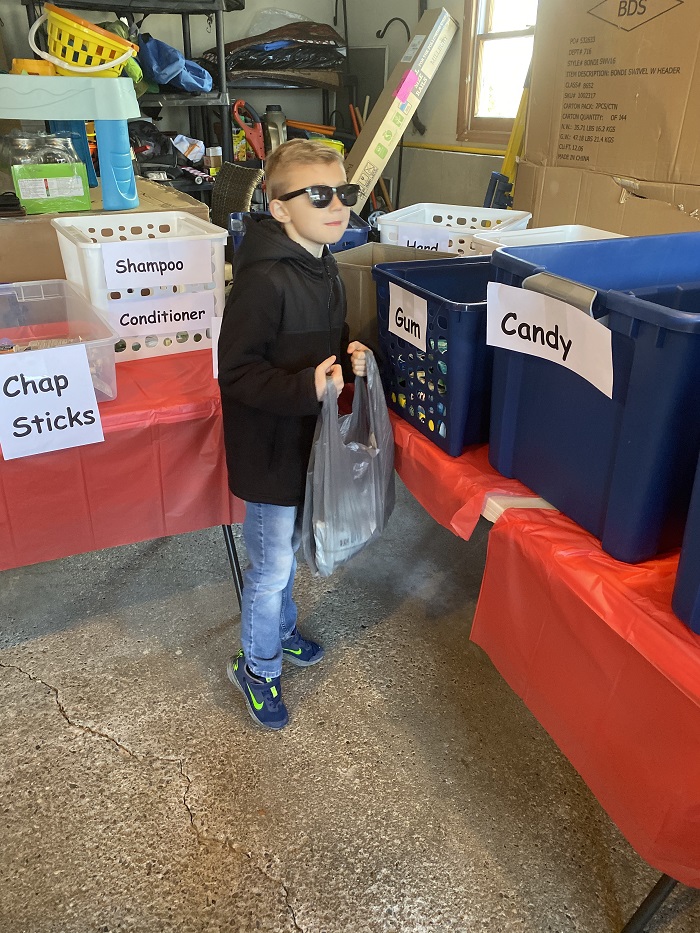 Next up was a trip over to our local Ronald McDonald House. I chose this organization because I’ve volunteered here a few times through work, and I just love everything about what they do and offer for the families in need of their services. 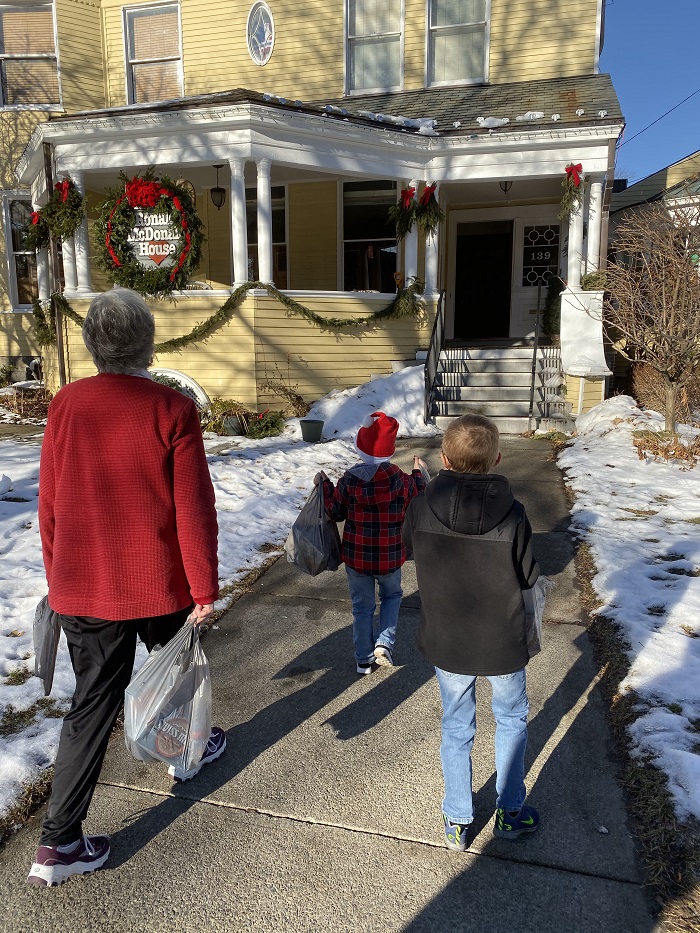 We also brought over some more items from their wish list, and then were given a full tour of the house(s) and what they do. I’d already seen most of what they shared on the tour, but the boys loved getting to see the various rooms and toys scattered throughout. 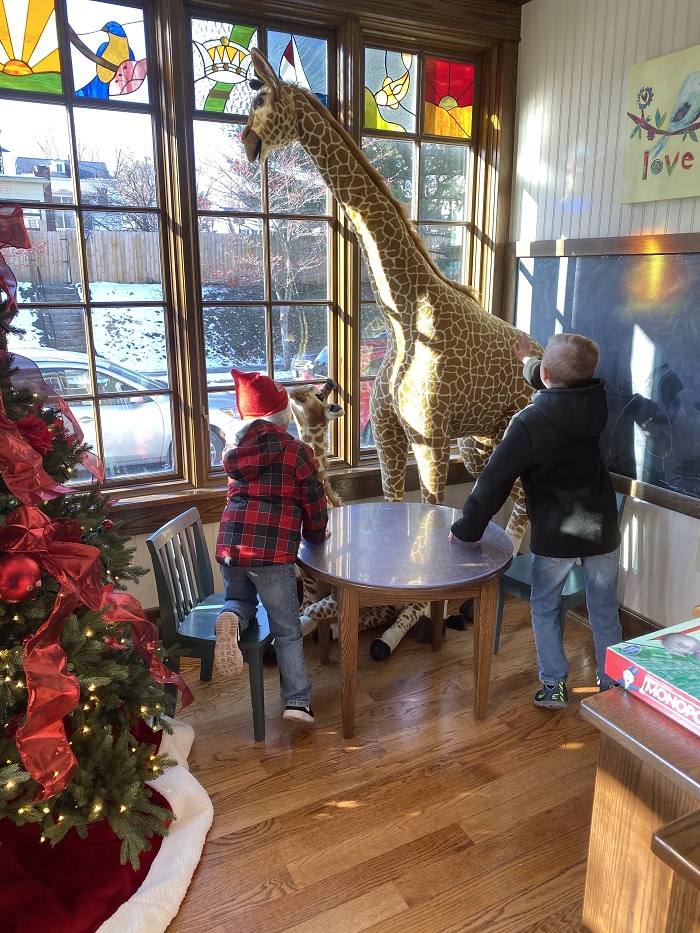 When all was said and done, the boys were still fairly impartial to the whole thing. I’d love to say they totally got it and were overly enthusiastic about it — and to an extent, I think did/were! — but they’re still little kiddos who are just overly excited about Santa. I totally get it.

Either way, I loved being able to go out as a family to “bring Christmas cheer” as Alex called it, and it will absolutely be a tradition I plan to continue to carry out every year. I know that with time, and as they get older, it will all start to (hopefully!) make more sense for the boys. <3

After our morning of kindness, the rest of our Christmas Eve was fairly low key. We stopped at the cemetery to visit Papa T, we stopped over at church, and the boys wrote letters to Santa. 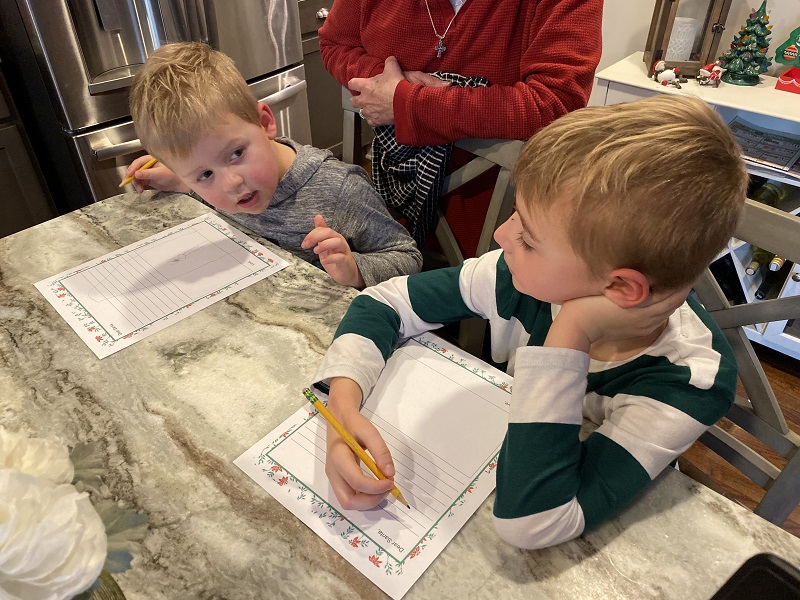 Jay made some more of his delicious steaks for dinner, we spread our reindeer food out in the yard, and then got the boys to bed shortly after that. 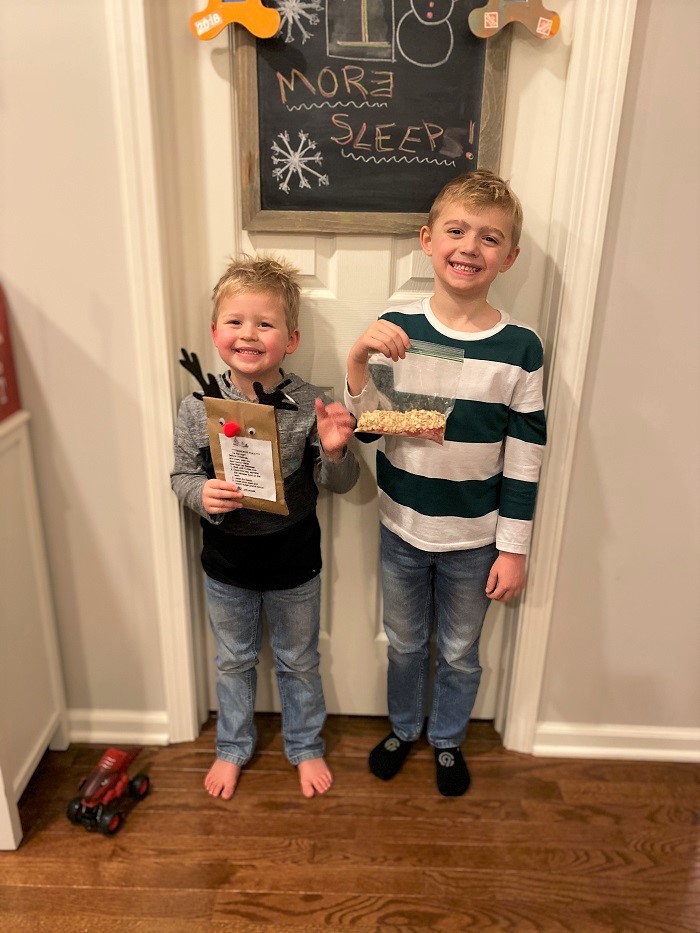 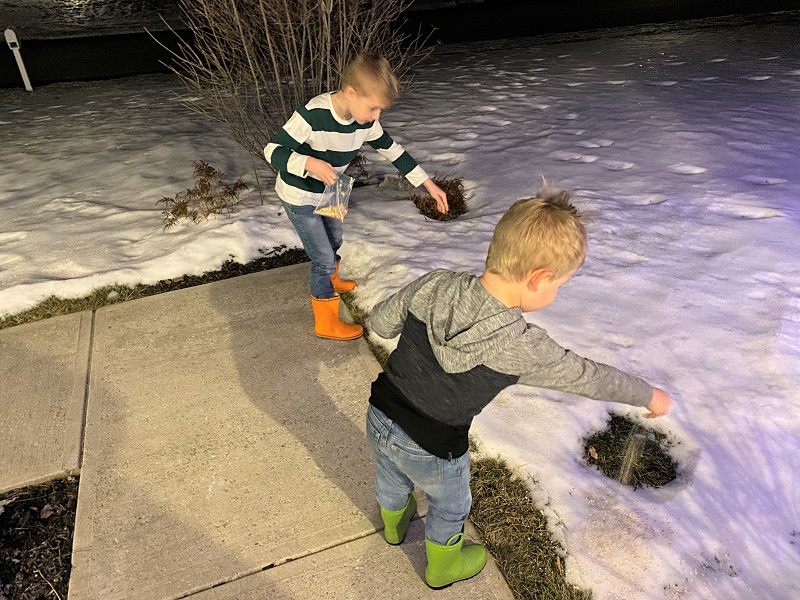 Once we knew the boys were asleep, we got to work on bringing all of the presents up from the basement and, of course, took care of Santa’s cookies and letters. 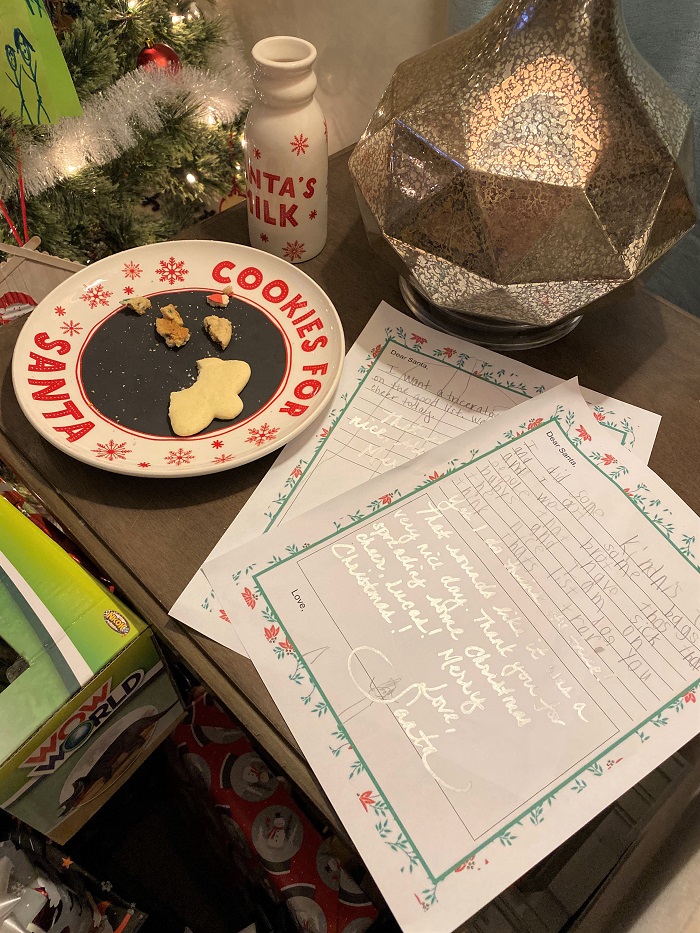 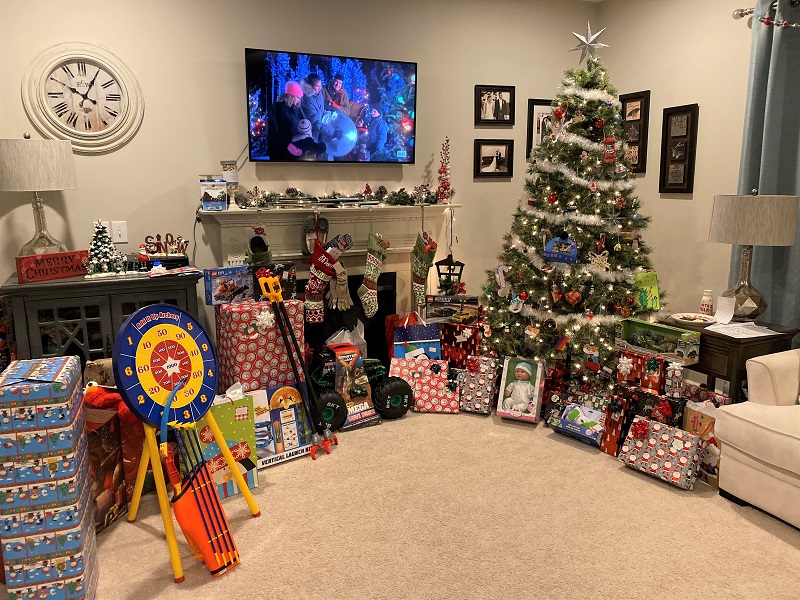 Christmas morning started bright and early, and we were downstairs by about 6:30am, thanks to an overly excited Lucas. My MIL always spends the night on Christmas Eve, and my parents and brother make sure to get there before the boys even get downstairs, so it was a full house! 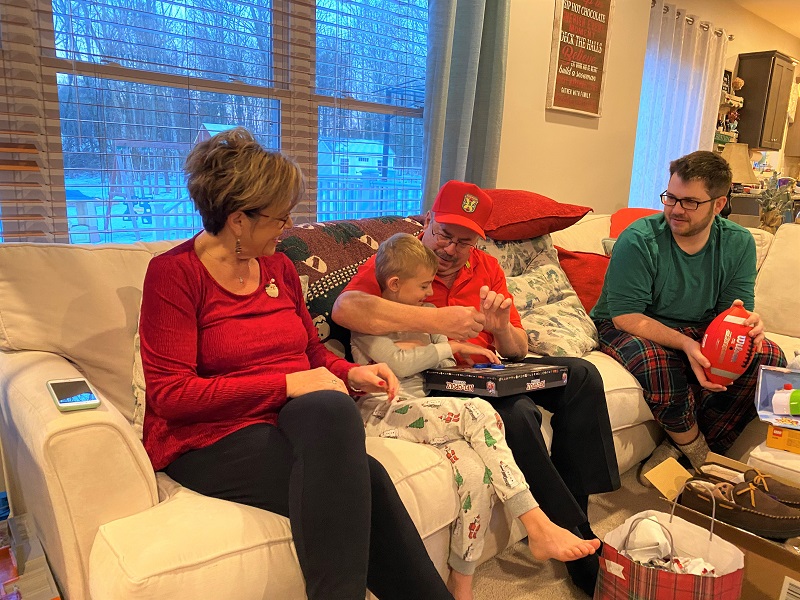 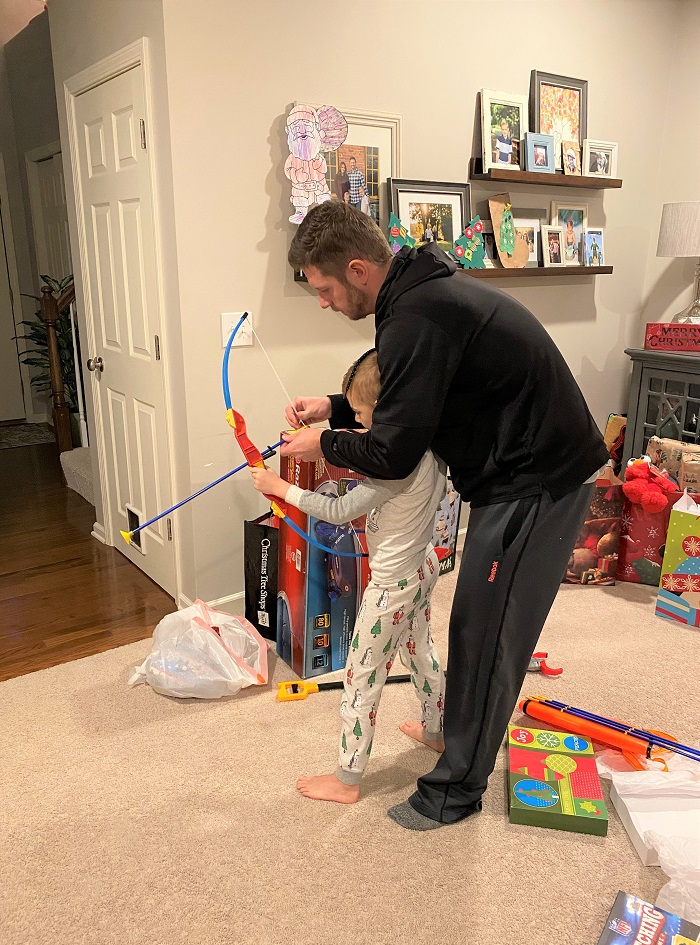 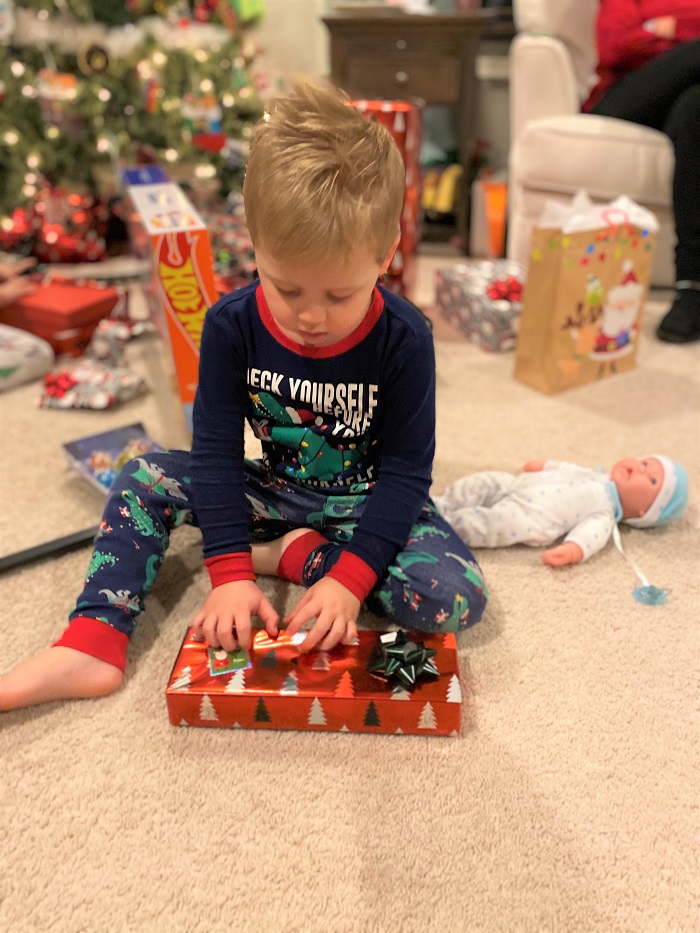 Out of all of the toys that Lucas had asked for, surprisingly enough, his favorite wound up being this NFL-Opoly game that I found on Amazon and ordered last minute. 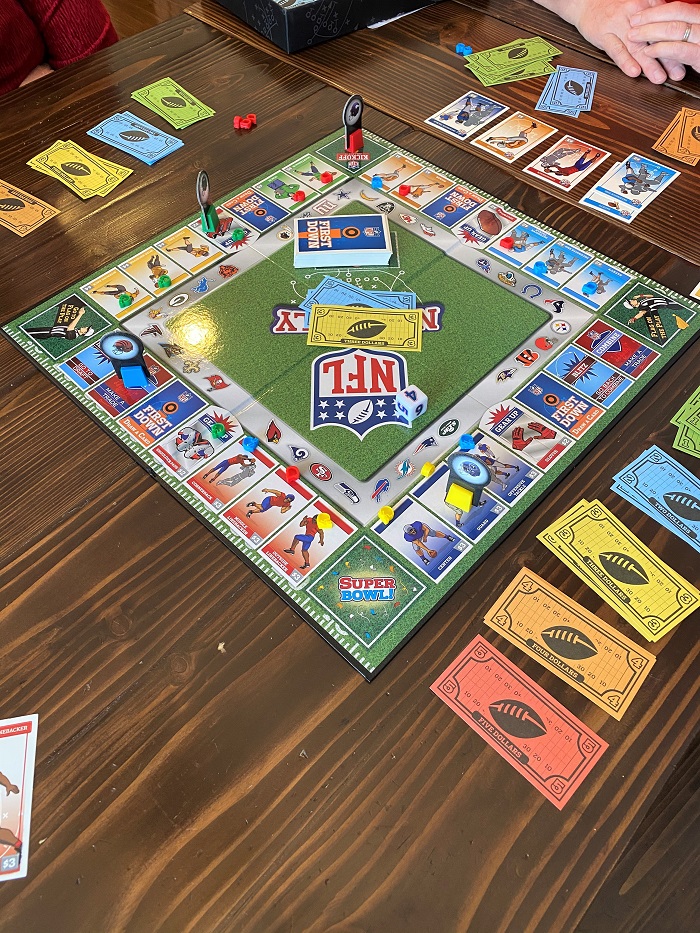 He’s recently gotten SUPER into football (and, much to my dismay, is now asking to play it which I am NOT prepared for, but that’s for another day…) and this game has been a big hit.

Alex was probably equally excited about all of his, but his reactions to finding the “new baby” and “ceratops” dinosaur he had asked Santa for were probably my favorite.

Such a great morning! 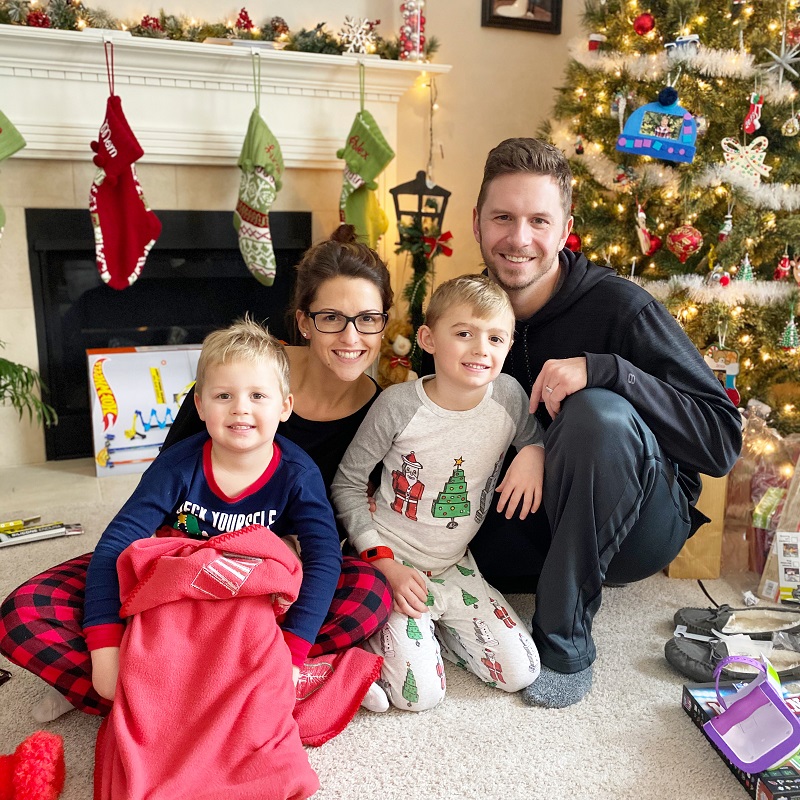 After enjoying our usual Christmas brunch spread, everyone enjoyed their toys and laid low for a bit before we eventually made our way over to my parents’ house later in the afternoon. 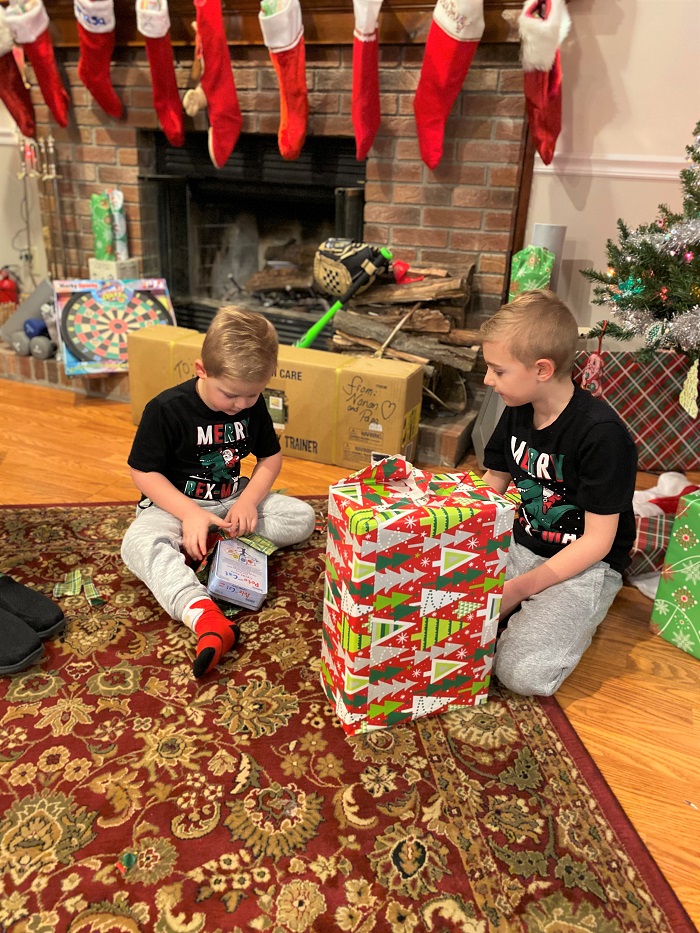 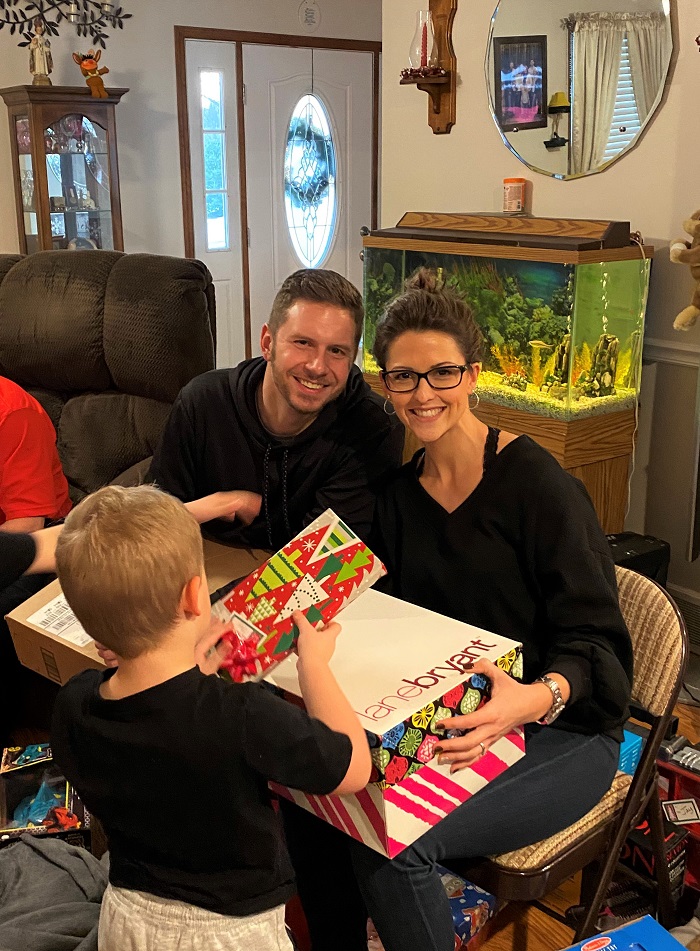 The boys were spoiled once again, we had some of mom’s famous lasagna, and the boys thought they were just the coolest with their fancy apple juice (plastic) glasses. 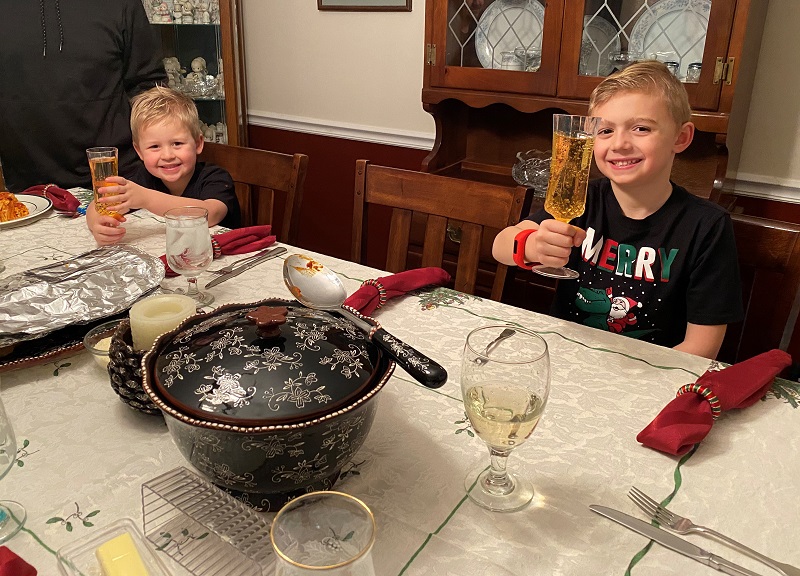 By the time we got home, the boys were more than ready to hit the hay, and THAT was a wrap to Christmas 2019!

« Wrapping Up the Rest of the Holiday Festivities!
Fun Facts Friday {1/3} »