Well heyyyyy there! Wooo WEE has it been a long morning. Hope everyone’s day is off to a great start and you’re all recovering from a fantastic weekend. Before anything else, here’s what you may have missed around these parts…

So as I mentioned last night, Jay and I ended up making some last minute changes to our plans, so when it came time for our originally planned dinner, we soon realized that it just wasn’t going to happen. Luckily, we had a few trusty standbys on hand, so we were able to whip a healthy little something up in no time. 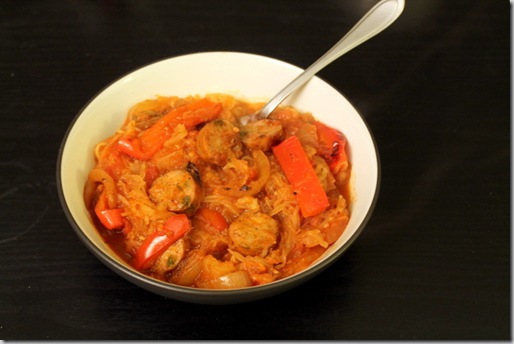 I know it doesn’t really look like much, but it tasted pretty darn awesome! Just a simple bowl of spaghetti squash, topped with some jarred garlic marinara sauce, Italian-style chicken sausage, and sautéed peppers and onions. 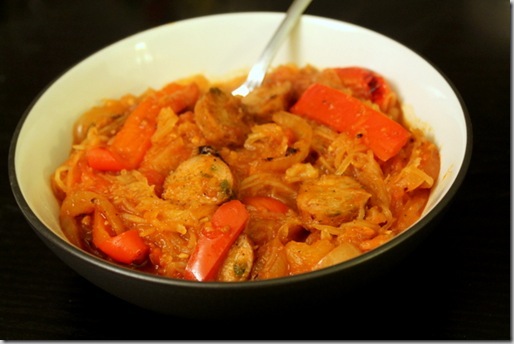 Jay actually took care of a majority of this dish, and I must say that he is a pretty darn good sauté-er…if that’s even a word?

We actually ate our dinner in front of the TV while catching up with Saturday night’s episode of SNL. We were both excited to see Lindsay Lohan’s appearance, especially since we had heard that there was going to be quite a few guest appearances, but neither of us were very impressed. She actually screwed up her lines quite a few times and was constantly looking at the cue cards.

The one skit I found the most funny was the one pictured above, when the three actors sitting down there all started cracking up on set. I absolutely LOVE when that happens! Did anyone else watch and/or see that skit?

This morning, I was up nice and early to head to work and get prepped for my first Tabata class! I was a little nervous, but more excited than anything, really. Unfortunately, I only had two girls in the class (who I happened to grab from the stair climber) and they only stayed for about half of it because one girl said she was getting lightheaded. Bummer.

The class isn’t really being promoted too much right now, since it’s just a soft roll out, but I’m hoping that things pick up sooner than later. I have another class to teach this afternoon, so hopefully I’ll get a few more to come in. We’ll see!

Immediately after class (or should I say, half class) was over, I decided to get in my own workout for the day. Today actually started day 1 of Tina’s Best Body Bootcamp which I’m participating in, so I brought my workout with me and did everything there. 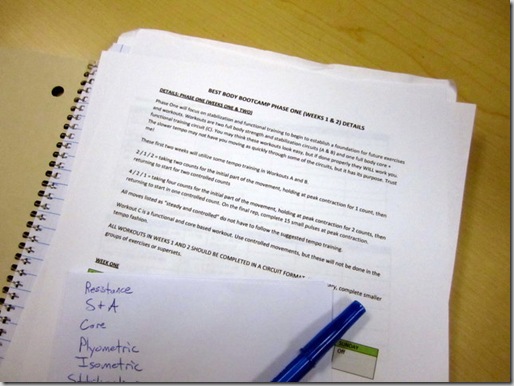 Today’s workout was 20 minutes of steady cardio (I ran on the treadmill) + “Workout A,” which consisted mainly of full-body stability exercises, including lots of use of the Bosu ball. It was great, and it’s so obvious that Tina really put a LOT of hard work into this program of hers.

I was actually just telling Tina the other day that this could not have come at a better time for me; I feel like lately I’ve been putting so much effort into OTHER people’s workouts that I really haven’t had any true goals or reasoning with my own. I’ve just sort of been doing whatever comes to mind that day. I’m definitely looking forward to continuing!

Post-workout, I ate up all of my snacks/breakfast that I brought with me to work: a black cherry Chobani, a piñata apple, and a honey graham Clif Z Bar, which actually turned out to be chocolate chip when I opened it. Odd, right? 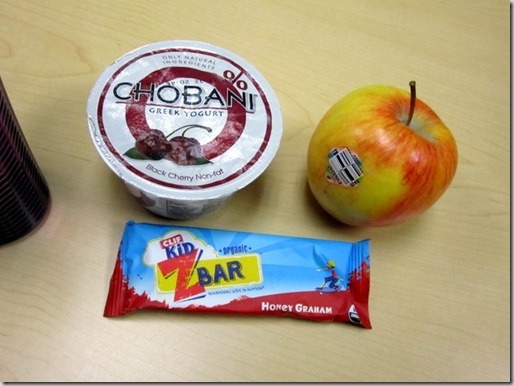 Thank goodness I checked the schedule before I left for work this morning and saw that I had two group sessions at 9am & 9:30am; otherwise, I definitely would not have brought all of this and would have been one hungry beast.

Once my group sessions were over, I headed back home, reheated the cold coffee that was waiting for me, and snacked on some cinnamon roast almonds. 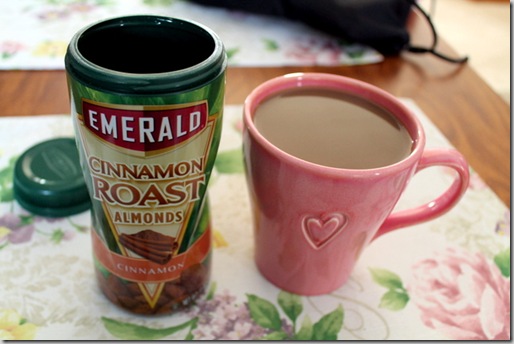 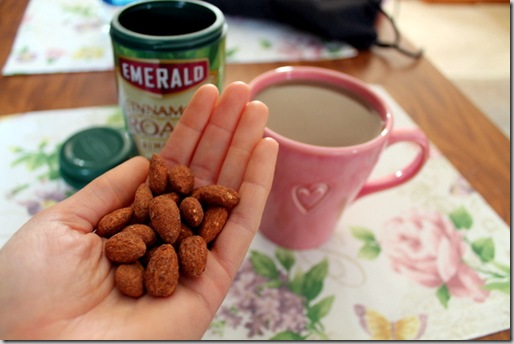 (And yes, I have tried the cocoa ones, but I like these ones WAY better!)

Now, I think it’s about time for a shower…yikes.

Do you usually workout with specific goals in mind (i.e., weight loss, build muscle, increase cardiovascular endurance) or do you just workout to do it?