Hey hey! Happy Monday to all of my favorite readers. How was the weekend? Do anything fun and exciting?

Our weekend was a good mix of everything – busy around the house, but still able to find some time to get out and have some fun too. On Saturday, Jay and I both got up and got to work on our to-do’s fairly quickly. The first stop on my agenda was to Babies ‘R’ Us to pick up a few more remaining things from our registry (can’t really blame people for not wanting to buy breastfeeding supplies!).

After that and a quick trip to the grocery store, I was back home and worked on a few things around the house while Jay worked outside. Since we had both worked so hard all day, we decided to reward ourselves with a little date night that evening, starting at Bombers Burrito Bar. 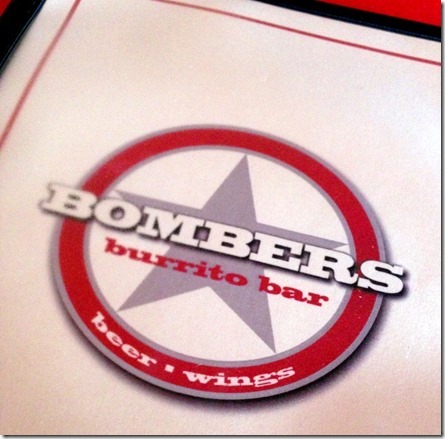 I have loooong been a fan of Bombers. You’ve most likely read about me there on my birthday, drinking a ginormous margarita…helping friends drink their own birthday margaritas…or just hanging with my pal Sarah.

They recently opened up a new location in downtown Troy, which is much closer to us than the other two, so we decided to go check it out. Better yet, we even got a spot out on the patio. Unfortunately, there was no margaritas this time around.

But our waitress did offer to make me a fun little drink which was quite tasty. 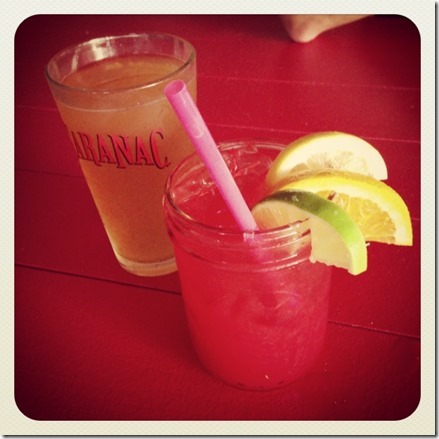 For dinner, I basically got what I always do – their bbq pulled pork (OMG so good) but instead of getting a massive burrito, I decided to stick with a couple of tacos. Definitely just as delicious but not nearly as filling. 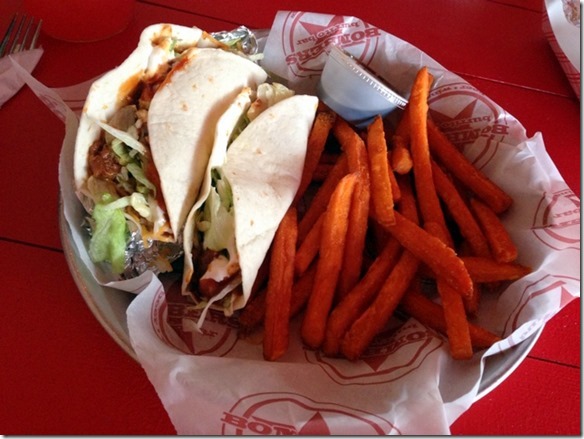 I think I may have found a new favorite.

After dinner, we stopped by a friend’s house for a birthday party, then on our way home we finished up “date night” with a quick trip to The Snowman. 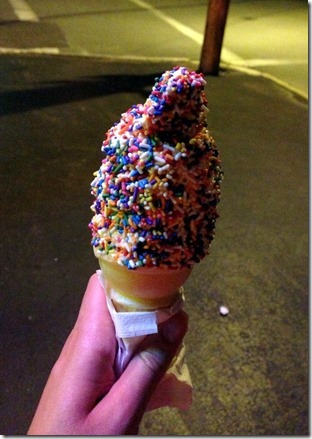 Yessssss….it’s been a couple weeks in the making, but I finally got my orange and vanilla twist with rainbow sprinkles. I was one happy camper.

Sunday morning, I woke up in a semi-crappy mood. I slept awful the night before and was just feeling a little cranky. I figured, what better way to perk up my mood than with some delicious pancakes for breakfast? 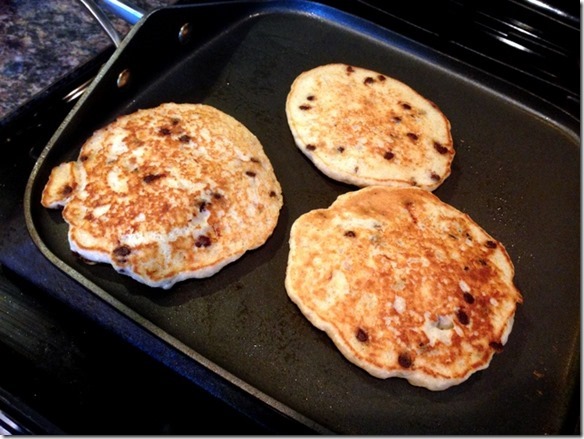 I whipped up a batch of Kodiak Cakes and added in about half a mashed banana and some mini chocolate chips…because sometimes, chocolate at breakfast is necessary, mmmkay?

Topped ’em off with a little PB, more banana, and a drizzle of maple syrup and I was good. to. go.

They were seriously incredible. And filling! Those babies stuck with me for a good 5-6 hours before I even thought about eating anything else. Crazy.

After breakfast and doing a few things inside the house, I decided to suit up and take the party outside the house…because the pool is finally OPEN for the season! 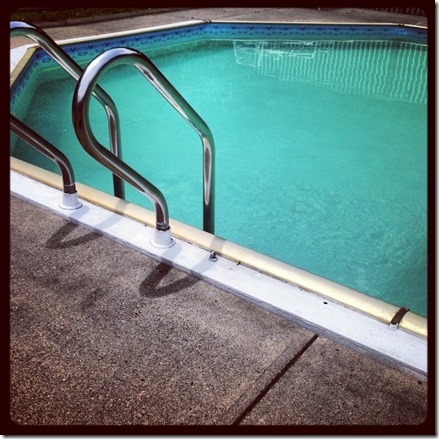 We were a little delayed, thanks to some busy weekends, crappy weather, and needing to buy a new motor, but we are finally ready for the season. I helped out by giving it its first vacuuming which had me working up such a sweat that I wound up being the first one in it for the season. Oh mannnnn, was it refreshing. And can I just say how AWESOME it feels being in a pool when you’re pregnant?!? It’s almost like you kinda forget about the whole massive belly thing. I want to live in that pool right now.

I wound up doing a few exercises, a few laps, and a good round of HORSE with hubby and the basketball hoop (which we later dubbed HORAN instead) before the inevitable storms rolled through and we were forced back inside. Luckily we still got a good couple of hours in, but man, the rain this past month has been somethin’ else!

A little while after getting back inside, you’ll never believe what happened…I actually cooked dinner. And it wasn’t a sandwich. ;) 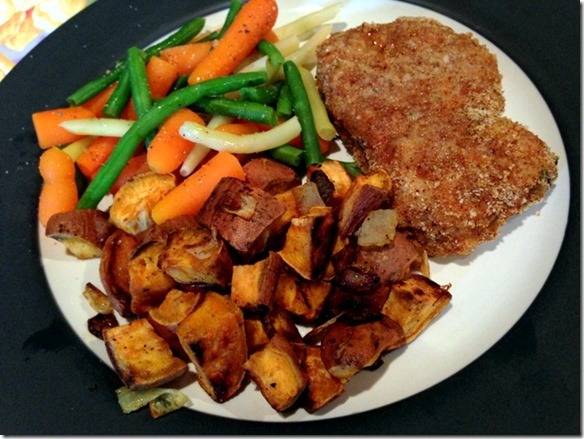 Oven baked pork chops, roasted sweet potatoes and onions, and some quick-steam veggies. I don’t know who was more shocked that we had a real dinner…me or Jay. But either way, it was deeee-licious, and I didn’t have to do the clean up. Woot!

So that’s pretty much our weekend, in a nutshell. Lots of good food and some great, QT spent with the hubby. Doesn’t get much better than that. :)

*FYI: The Baby Tooth page got an update this morning!

Have a great day, everyone. :)