I miss you all, how have you been??

I remember this stage with Lucas being a bit weird in terms of just about everything in life, including blogging. I wanted to blog, but I felt like anytime I went to write something, it was always the same thing…my life with a newborn, and that’s about it! Because, well, that was the majority of my life.

This time? I would love to get on here more and find the time to chat with you all but my hands are pretty much always full. 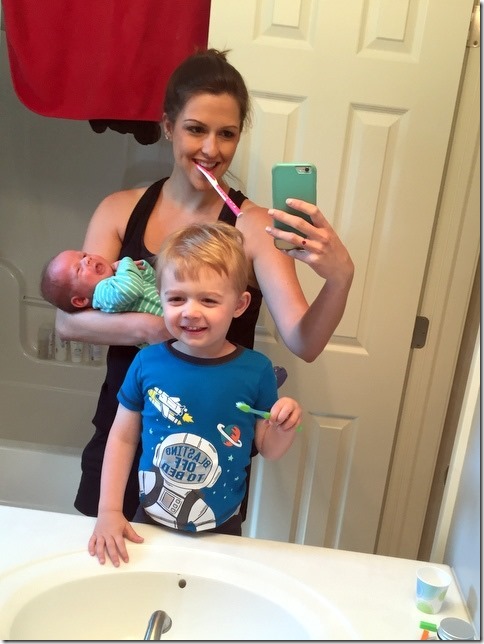 I’m still trying to figure out this whole “mom of two” thing, and most days I’m definitely still struggling. More so than when I had Lucas, but I would think that’s somewhat normal and/or to be expected since I’m trying to juggle two instead of one? I don’t know.

Some days are harder than others; Saturday, for example, was hard. Jay was gone all day, Lucas was very much in need of my attention, and Alex was bellying up to the milk bar just about every hour/hour and a half. On top of that, he and I were also diagnosed with thrush, which has been no fun at all, so we’re both on meds for that (holy hell, my boobs hurt). I think all three of us cried on more than one occasion that day. 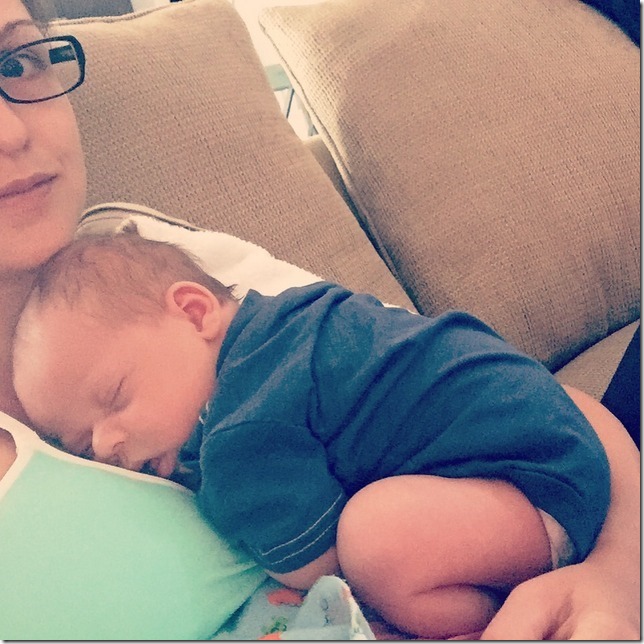 But not all days are hard. Some are awesome, and mornings in particular are my favorite because that’s when Alex is usually the easiest (aka, I can leave him to play on his play mat or in his swing for a little while without crying and not having to be held). Like this morning? I think it was an especially great morning for Lucas, since we had about 4 cement mixer trucks and other multiple trucks right outside our front door. He was in heaven! 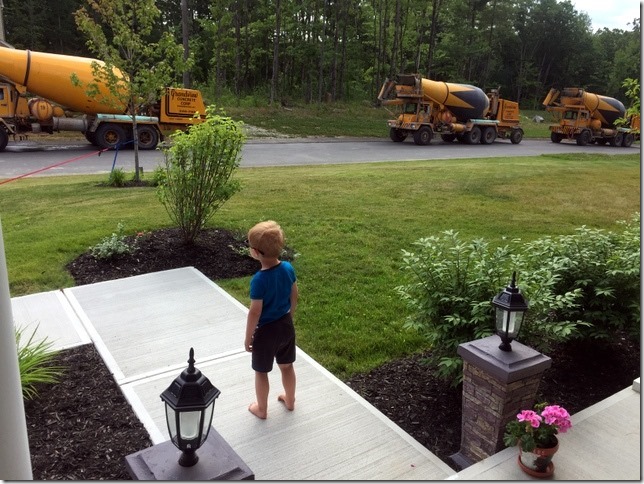 Afternoons can be hit or miss; there’s been maybe two times so far where both boys are napping at the same time which also allowed me to nap a bit too (I was tempted to blog, but knew I needed the rest). I’m hoping to start introducing a bit of a schedule with Alex soon, so we’ll see how it goes!

But for now, I’m just doing lots of baby holding/wearing (I have a Moby Wrap and an Ergo, but don’t use them nearly as often as I probably should). I’ve mastered doing puzzles with one hand… 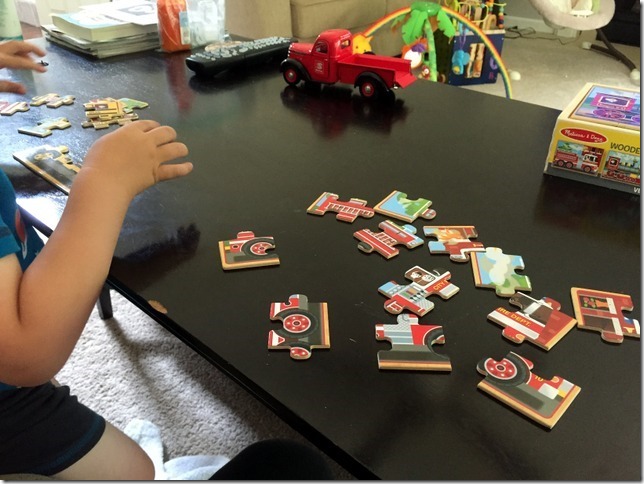 And I’ve also gotten pretty good at finding some delicious and easy one-handed snacks, too. This one has been my jam lately! 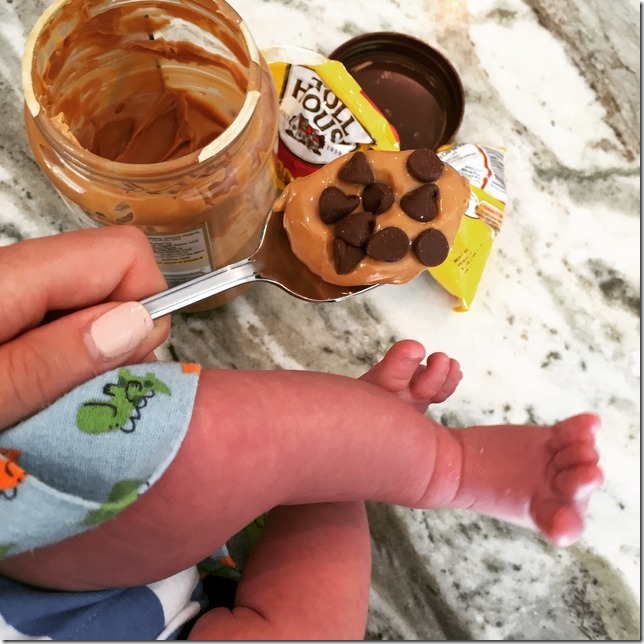 Thankfully, I have a little extra help this week (Jay took a few more days off of work and my MIL will be here a couple of days as well) which is totally awesome. Jay and Lucas have been spending a lot of time together and I love watching them play. <3 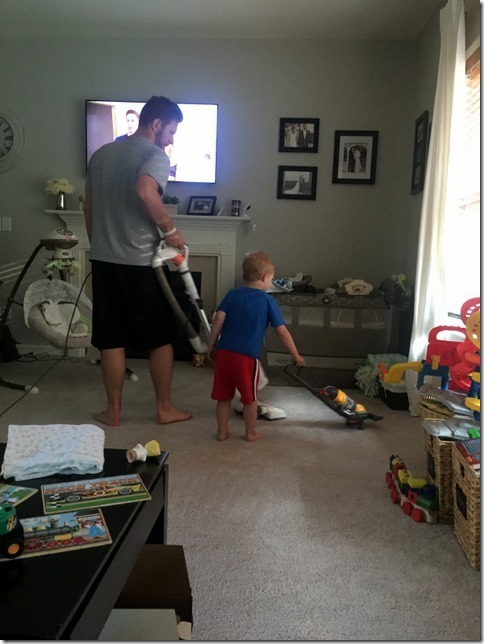 My parents have also stopped in a few times (although they’re on their annual vacation this week – I was bummed to have to miss Virginia and Wildwood, but didn’t think there was any way I’d be able to swing it just yet!), so that’s been nice. On Friday, for example, it was a beautiful evening so we all sat outside, ordered a pizza, and I had a delicious glass of sangria. 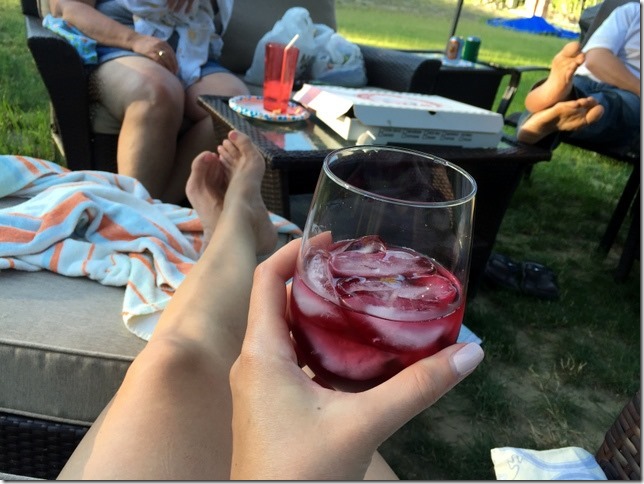 I would have had about thirty more if I wasn’t nursing so often.

On Sunday, we also headed over to my parents’ pool for the day and hung out with my brother and his girlfriend. It was nice to be out of the house for a bit! 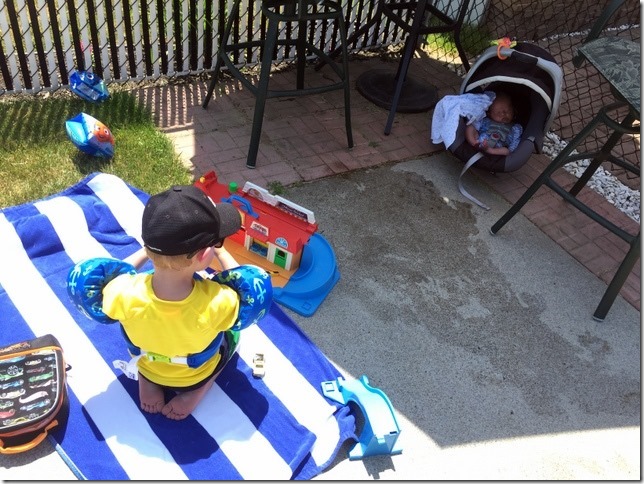 But other than that, that’s about all I have to share right now. I’m really not sure how often I’ll be able to check in over the next few weeks, but I’m hoping that at least a couple days a week can happen. I do still have a few more posts scheduled to share with you, so be on the lookout for those, too.

In the meantime, I’ll be over here bouncing around, shoving my (constantly starving) face with scoops of peanut butter, and doing puzzles.

*P.S. – The winner of the Sears gift card giveaway has been chosen and emailed (sorry, I forgot to mention it sooner, but congrats to Nadine!)

« How Are Things Going?
6 Zucchini Recipes You Need To Make Now »