Hey guys! Happy Monday! And a very happy (belated) Mother’s Day to all of the wonderful moms and mom-to-be’s out there!

We had a pretty good weekend over in our neck of the woods. Friday night Jay had a softball game, and we had a pretty good group of us in the stands. So I basically spent my evening chatting away and having some pretty hilarious conversation with my mom, Sarah, Nicole, and Erika (all folks you’ve heard of before around here).

Jay and I had a lazy start to our Saturday, which was just what we needed. After lounging around for a bit, we got ready for the day and headed out to run some errands, including grocery shopping and Home Depot. Yes, I’m pretty sure almost all of our errands include a trip to Home Depot these days…I swear, we’re ALWAYS there for one thing or another. We spent a bunch of time working on the nursery (mostly on the closet) so after a few hours we decided to take a break and head out for a little date night dinner at one of our favorite spots, Brown’s.

We went early thinking we’d beat the crowds, but we still wound up with about a 45 minute wait, so we hung out at the bar and chatted while Jay drank his cherry raspberry beer (SO jealous) and I sipped on my Shirley Temple. Once we got to our table, we decided to order a crock of their french onion soup, which we had spotted earlier while waiting at the bar. It looked SO good… 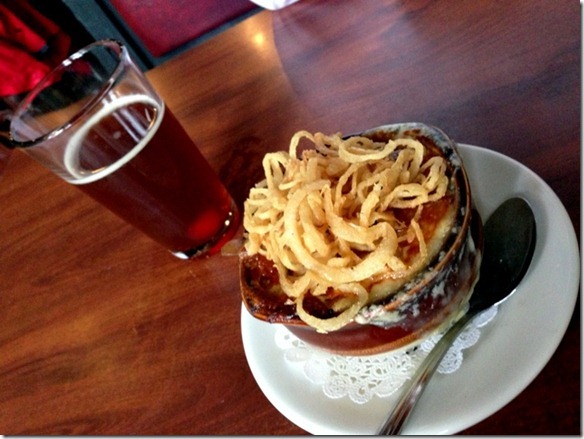 and it tasted incredible. The crispy onions on top? Ohhhh myyyy gawwwd.

Jay also made it a  point to throw his beer into the pic…pretty sure he was taunting me. ;)

For dinner, both of us wound up craving a burger. I ordered the Chef Luca, which came with smoked Gouda, guacamole(!), bacon, cherry raspberry ale BBQ sauce, and crispy onions. It was pretty good, but not quite as great as the last cheeseburger I had out. I made a decent dent, but couldn’t finish it all. 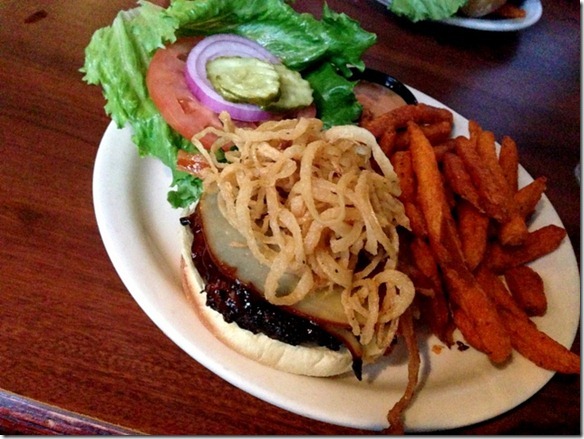 After dinner we came back home, worked a little bit more in the nursery, and then spent the rest of the evening relaxing and catching up on the DVR from the week. Cody was in the same relaxation mode himself. 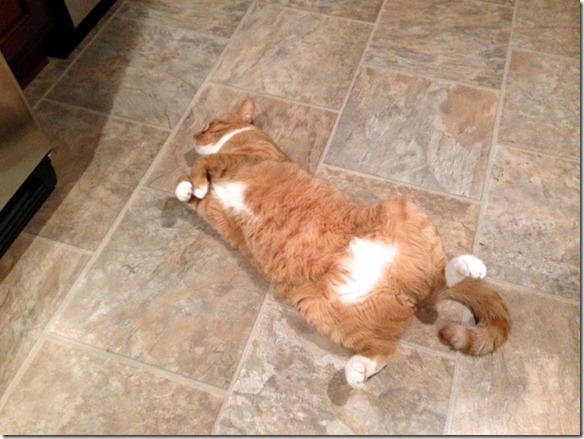 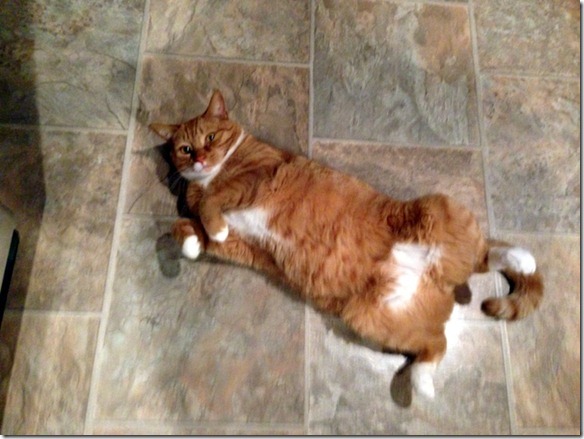 For Mother’s Day on Sunday, we started the day with brunch with my in-laws at a local place called Carol’s. (And if you’ve been reading the blog for a looooong time, then you may have seen the one other time when Jay and I visited back in 2010).

We actually chose Carol’s, thinking that it might not be as crowded and wouldn’t require reservations, but we were totally wrong. We did end up having to wait probably a good half hour or so, but it was totally worth it. They were doing a breakfast buffet (also unbeknownst to us), which allowed me to indulge in a little bit of everything. 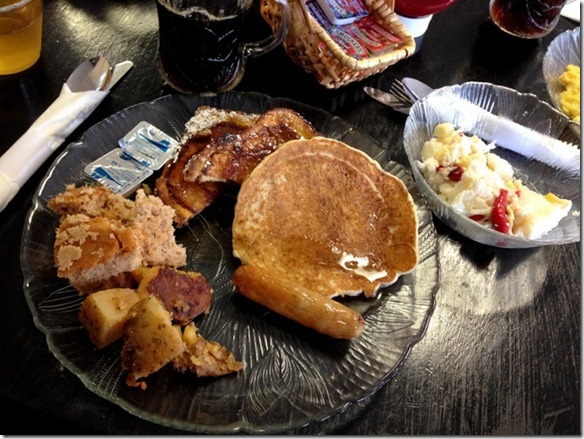 My favorite was most definitely the french toast, which was made with a killer cinnamon raisin bread. Ohhh it was tasty.

A few hours later, we headed over to my parents’ house for dinner which included lots of yummy stuff from the grill. I had a chicken sausage, baked potato, and loads of incredibly delicious roasted veggies. 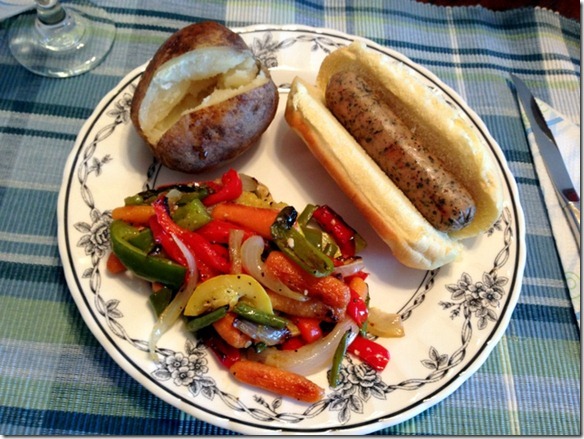 I mean, is that not a bowl of heaven or what right there?? 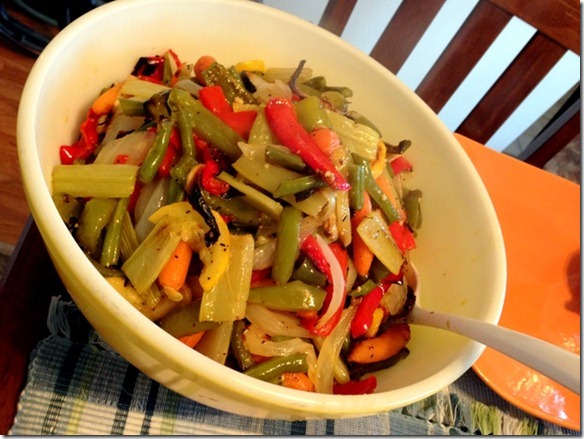 I offered to take care of dessert, which I put together a bit earlier in the day. 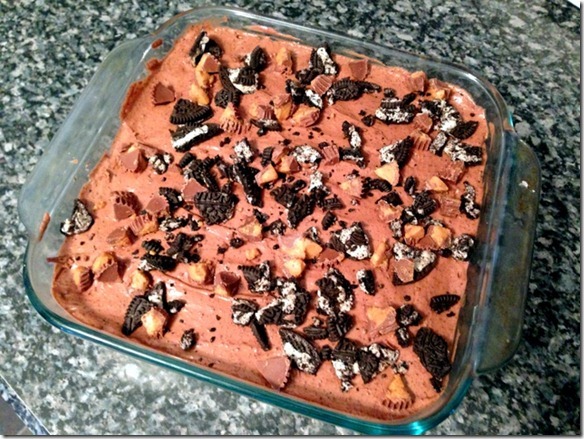 Just check out that beautiful layering. 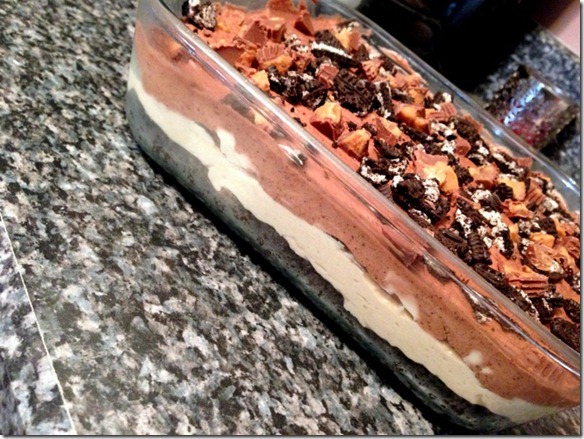 I actually used this recipe from Taste of Home which I found on one of my Pinterest boards from a while ago. It’s a no bake recipe, with layers of Oreo cookies, a peanut butter cream cheese layer, peanut butter cups, a chocolate pudding layer, and more Oreos and PB cups. I used light ingredients for most of it, but followed the recipe exactly, and all I can say is that this thing is decadent. 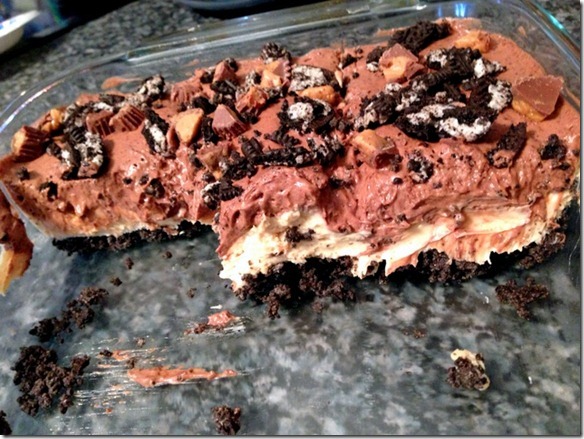 It was sooooo good while I was eating it, but by the time I was finished with my piece, the thought of chocolate or peanut butter just did NOT sound appealing anymore. Whew, that thing was rich beyond belief, and it was awesome…but even still today, I’m not loving the idea of peanut butter or chocolate. What does sound good? Salty chips. Heck, salty anything. I think it’s a good thing I let mom and dad keep the leftovers.

I didn’t realize it until this morning, but that right there is the extent of photos that were taken this weekend. Whoops! But it was still a great weekend, albeit not all that documented. And as for today? Well, I’m draggin’ guys. Big time. And if I’m being honest, I’m feeling a little on the grumpy side too. I did not sleep well at all last night and I am just having a tough time getting back into GO mode this morning. Hopefully I’ll start to perk up once I’m at work and moving. If not, I may have to figure out a way to take a lunchtime snooze. :)

How was your weekend? Do anything special for Mother’s Day?