I’m switching things up a bit this morning.

We’re not talkin’ about breakfast today. Nope, not at all. Instead, we’re gonna talk about last night’s dinner.

Eeeeek. Just looking at it again makes me excited.

So a few weeks ago, I was invited to participate in the Hodgson Mill “Build a Better Pizza” Facebook Recipe Contest. I’m always game for making pizza, so I figured, sure – why not? As a part of participating in the contest, I was sent a package of Hodgson Mill products, including Hodgson Mill whole wheat flour, organic white all-purpose flour, yellow corn meal, and yeast packets. I was good to go! 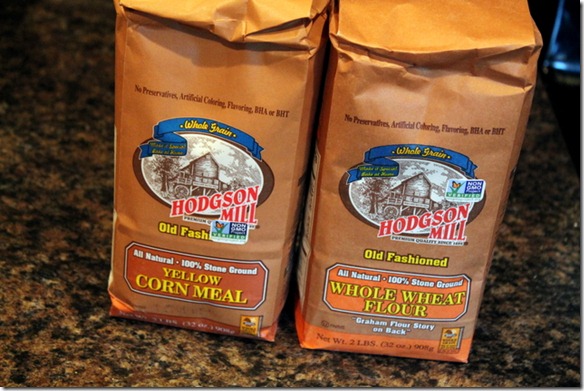 So shortly after hearing about the contest, I started talking with Jay about what type of a recipe I wanted to create for my entry. I obviously wanted to do something unique – something that nobody else would probably do. At the same time, I also wanted it to be somewhat “safe” since it had to taste amazing too.

Then one day last week, it hit me…

“I’m going to make my Chicken Parmesan Burgers into a pizza!” 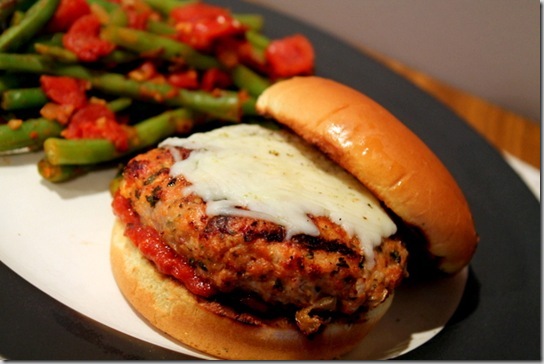 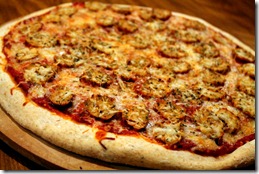 So last night, I got to work. The first thing I did was make a batch of the Chicken Parmesan Burgers, but rather than make them into patties, I rolled them into meatballs. 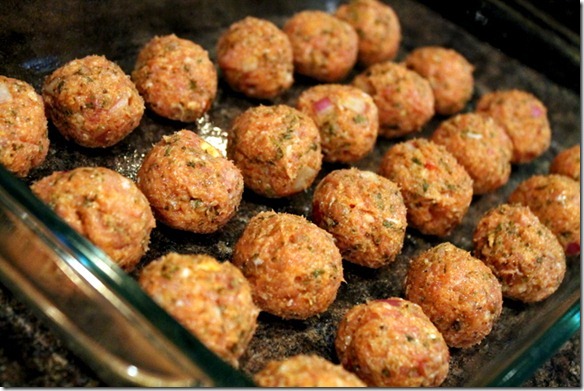 To make the meatballs:

I rolled 24 meatballs and placed them all in a 9×13 pan sprayed with nonstick cooking spray. Cook in a 400 degrees F oven and bake for about 25 minutes, until slightly golden.

(Since the pizza only required about 8ish meatballs, we’ve still got a good amount left to have another time – score!)

Around this time, I also worked on making the dough. One of the stipulations for the contest was that the recipe needed to include a homemade crust comprised of at least 50% whole wheat flour. No problem-o.

Since I wanted to somewhat mimic my chicken burgers, I also made sure to season this crust the same way I would season my burger buns…with a little garlic and Italian seasoning. (recipe down below!) 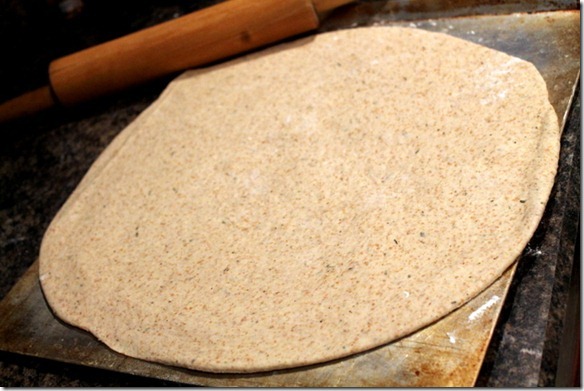 Once the dough was made and had risen, I rolled it out onto a sheet pan while my baking stone heated up in the oven. (We like to cook our pizzas this way, since the hot stone helps make the crust a bit crispier).

Once the oven was preheated, I took out the stone and sprinkled it with yellow corn meal. 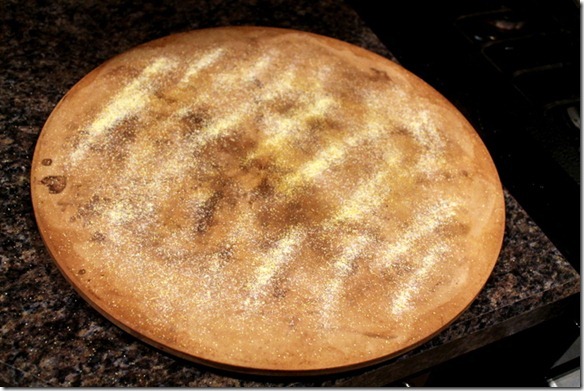 Then I transferred my prepared dough onto the hot stone, attempted to make it into somewhat of a circle, and got ready to start building. 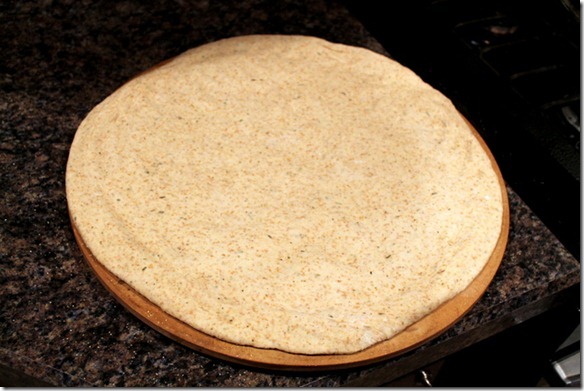 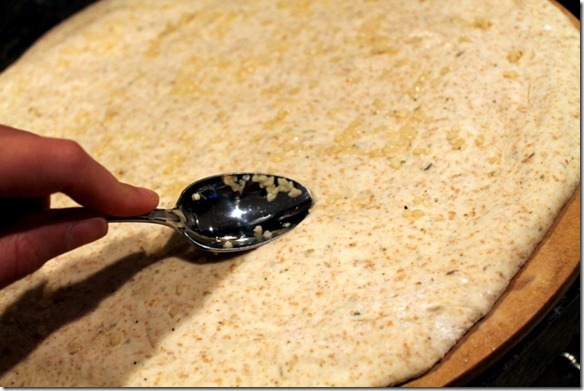 Next up: pizza sauce. And lots of it. We’re big fans of the stuff around here. 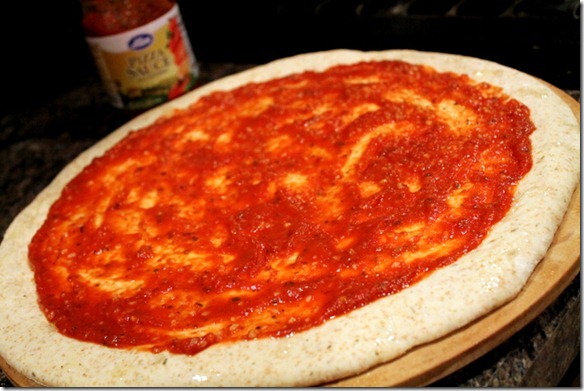 Next up: Play a few rounds of fetch with Cody because you’re still feeling guilty. 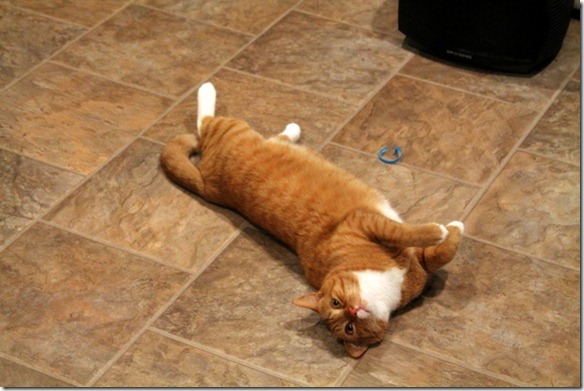 Next up: sprinkle a thin layer of shredded mozzarella cheese on top of your sauce. Then layer on some of your cooked and sliced chicken parm meatballs. Finish the pizza off with another layer of cheese and some dried oregano and basil. (I also sprayed my crust with a little garlic olive oil that I have, just for a little added flavor). 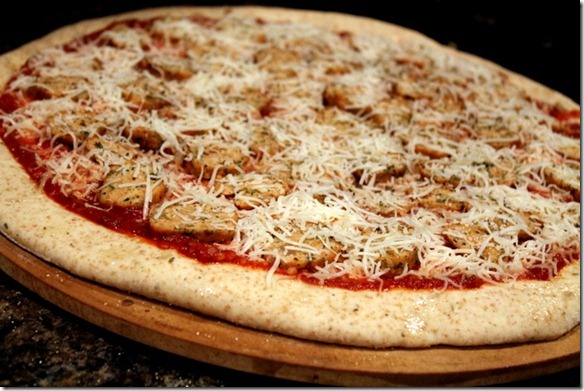 Pop the pizza into your preheated 400 degree F oven, and allow it to make for about 15-20 minutes, or until crust is slightly golden and cheese is melted. 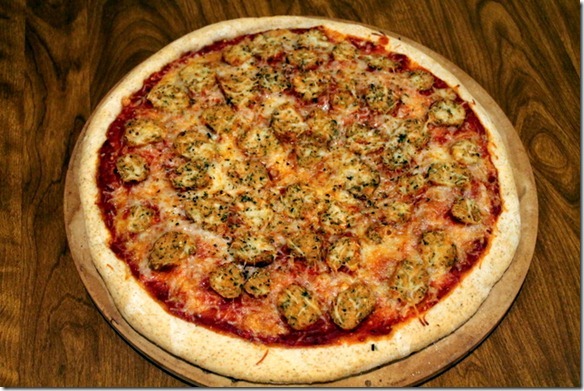 Take it out of the oven, salivate like it’s nobody’s business, and cut into slices (8 for us). 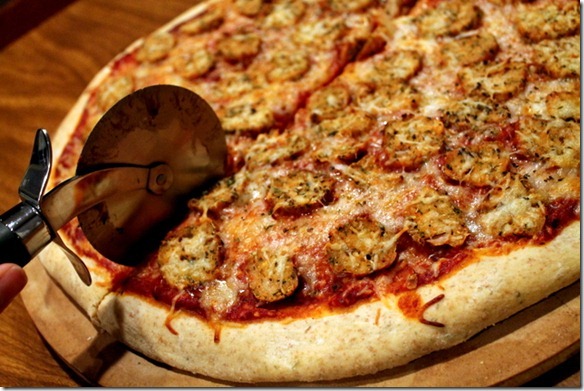 Then take your slices and dive right in. 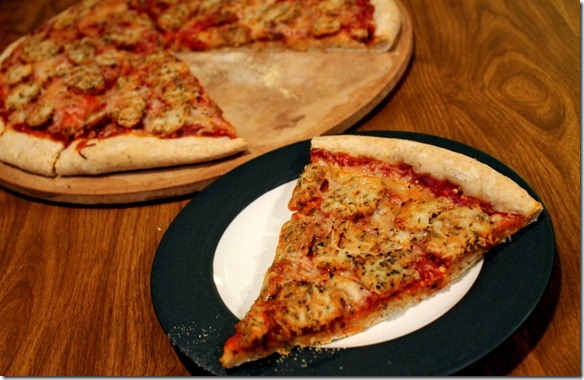 The awesome part is that you could truly taste each and ever element of the pizza: you had the Italian garlic and herb seasoned crust, the garlicky sauce, the juicy chicken parmesan meatballs, and, of course, the cheesy mozz. 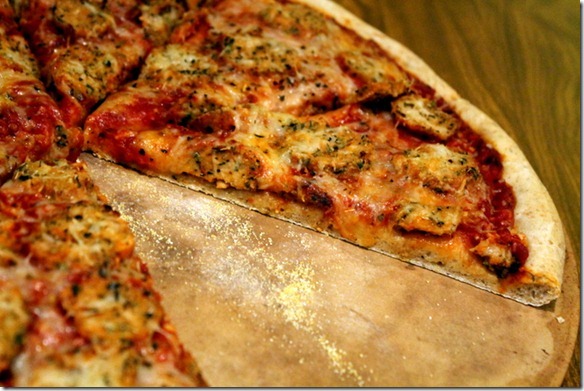 If you’ve tried the Chicken Parm Burgers – or you just love pizza – then you definitely have to give this pizza a shot.

**Good news is that my recipe is now UP and running, so if you love me lots, feel free to CLICK HERE to vote for my yummy Deconstructed Chicken Parmesan Burger Pizza. Thanks a bunch you guys! 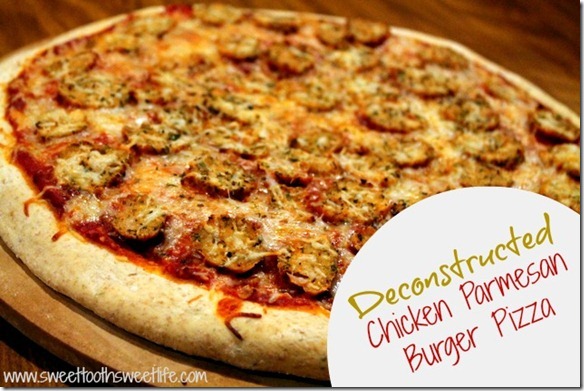 (inspired by my Chicken Parmesan Burgers)

**I made my dough in a bread machine, but if you don’t have one, follow these steps for the dough:

In a large bowl, combine water, yeast, sugar, and olive oil. Mix with a spoon, then let sit until foamy, about 10 minutes. Add in all of the all-purpose flour, 1-1/2 cups of the whole wheat flour, sea salt, garlic powder and Italian seasoning. Stir with a spoon until dough comes together but it still sticky. Using your hands, form the dough into a ball and work the additional 6 tablespoons of whole wheat flour (you don’t need to use all if it is not needed) in to the dough, kneading it on a floured surface for a few minutes. Rub the same bowl with olive oil then place the dough inside, turning to coat. Cover with a towel and place in a warm place to rise for about 1 1/2 hours.

Preheat oven to 400 degrees F. (if using a pizza stone, place that in the oven while preheating)

After the dough has risen, punch it down and place it back on the floured surface. Using a rolling pin or your hands, form it into your desired shape. (if using a pizza stone, remove from oven, sprinkle with corn meal, and place dough onto hot stone). Build your pizza, starting with garlic, then layering on your sauce, cheese, chicken parm burger meatballs, more cheese, and seasonings.

Bake in a 400 degree F oven for 15-20 minutes, until crust is slightly golden and cheese is melted.

Cut into slices and ENJOY! 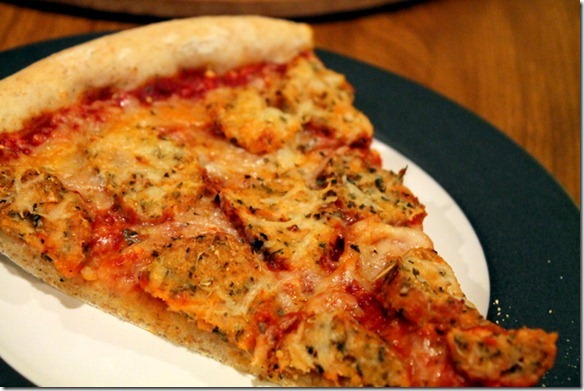 I know we sure did.