Sunday already? Mannn, this weekend is flying by!

Last night, Jay and I enjoyed a fun and delicious evening out with good pals. 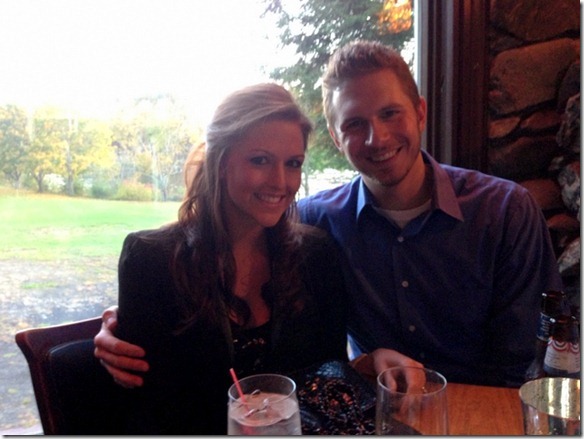 Our friends, Sarah and Jeff, asked us to be their guests at a special dinner that they were invited to. We’re always thrilled to hang out with these two. 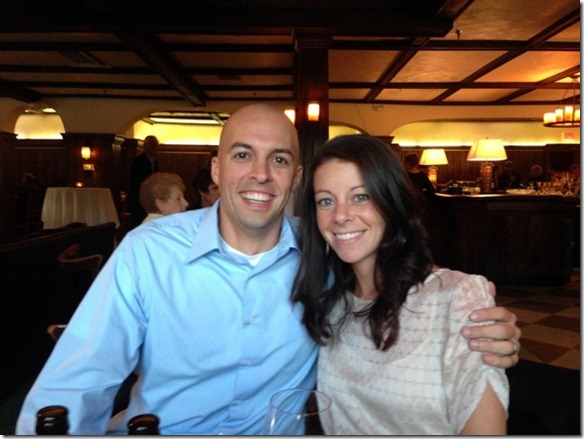 The dinner was actually back at the same location where Sarah and Jeff got married last year, so it was a bit nostalgic for all of us. And not only was there a delicious, four-course meal, but there was also an incredible band playing too. I’ll get to that in a second.

The evening started off with some appetizers, so the four us grabbed a table in the lounge area and enjoyed some snacks and beverages. 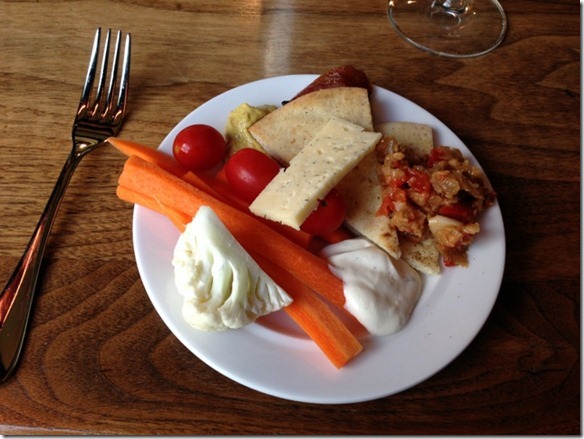 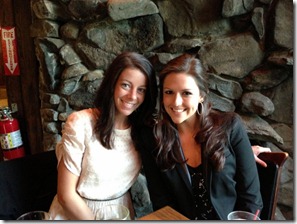 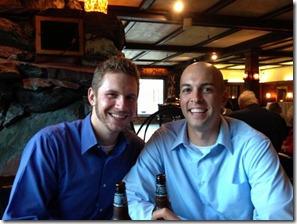 Around 6:30, we were invited into the main ballroom area for dinner…you’ll have to excuse the blurry photos because I only had my iPhone with me and it was pretty dimly lit in there. I think you’ll still get the idea though.

Once we arrived at our table, we were presented with a harvest salad which I’m pretty sure was made up of apples, pears, candied nuts, and a brandy vinaigrette. 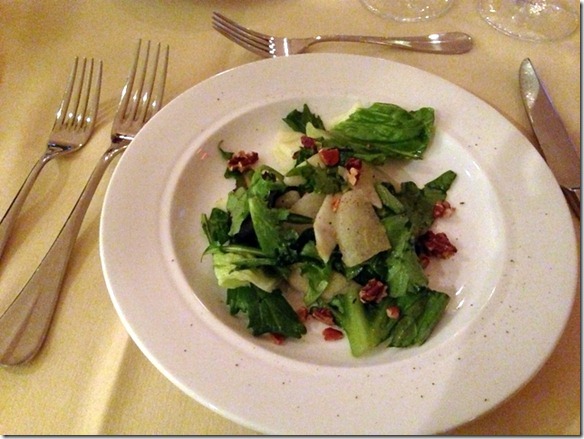 We also had some fresh rolls that felt like they were hot out of the oven…my favorite. 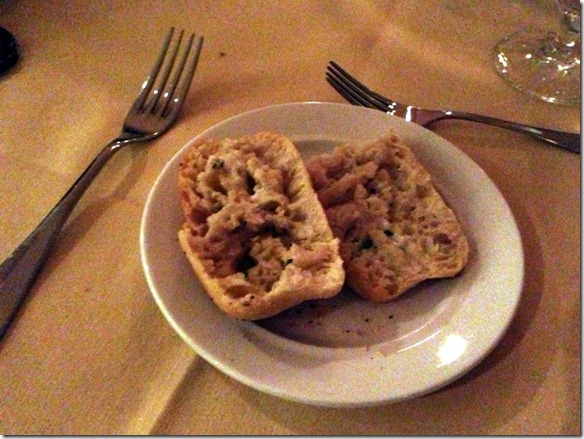 Our next course was, by far, one of the most delicious things I’ve ever eaten. Unfortunately, the picture doesn’t do it justice so you’ll just have to trust me on this one. 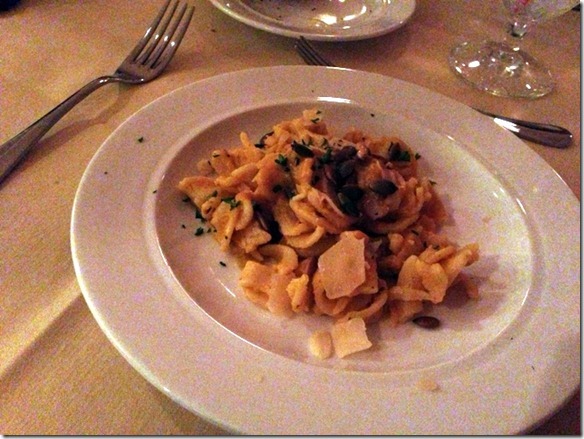 It was a pumpkin pasta of some sort, topped with sunflower seeds and fresh shaved parmesan cheese. Words just can’t describe…

Sarah and I are keeping our fingers crossed to be able to get our hands on the recipe.

For my dinner, I decided to order the herb-crusted baked cod, which came with a potato-gruyere gratin and green beans. 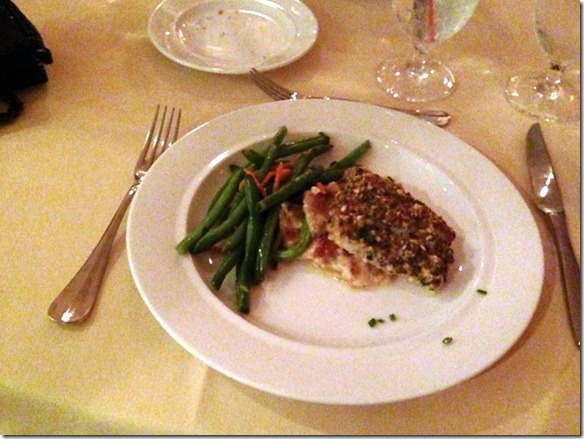 Again, another delicious dish. But really, I don’t think I’ve ever had food from The Old Daley Inn that wasn’t amazing.

Shortly after dinner, it was time for some entertainment, courtesy of The Joey Thomas Big Band. 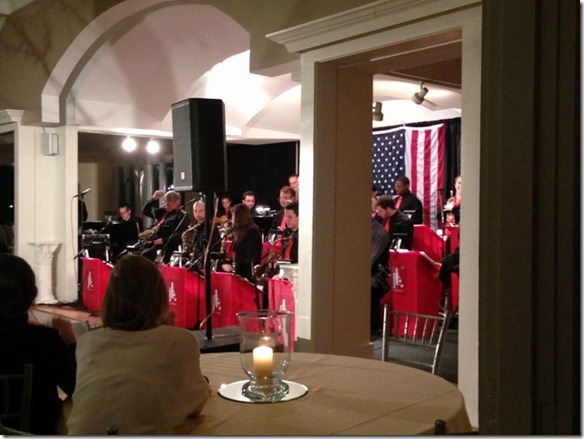 The band was GREAT and played all sorts of songs, all the way from the 1930’s up to the 2000’s. They also had a vocalist who was absolutely phenomenal.

It was so fun to sit and watch last night…to give you a quick overview, the four of us were easily the youngest people in attendance. Besides our table, I’d say the rest of the attendees were probably between 40-80 years old, and they all came to get their dance on! 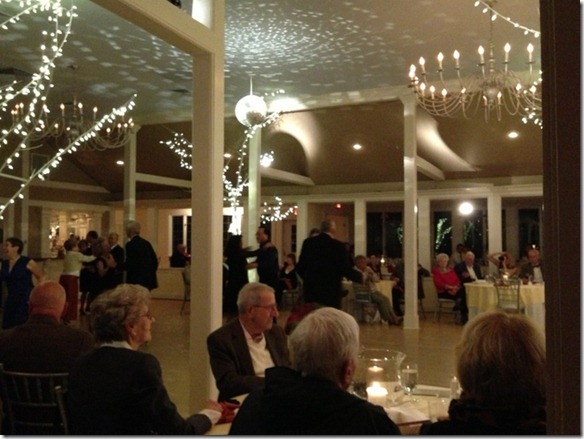 It took about half of a song for everyone to start hitting the dance floor, and these men and women were all so fun to watch. There were a few elderly couples who were out there dancing their little hears out and I just couldn’t help but smile.

The four of us all said that we want that to be us someday – out on the town, drinking bottle after bottle of wine, and dancing the night away. Sarah and I are also now trying to convince the boys to take dance lessons with us. I’m happy to report that the request was not turned down!

A little while later, as the band was still playing, dessert was served. 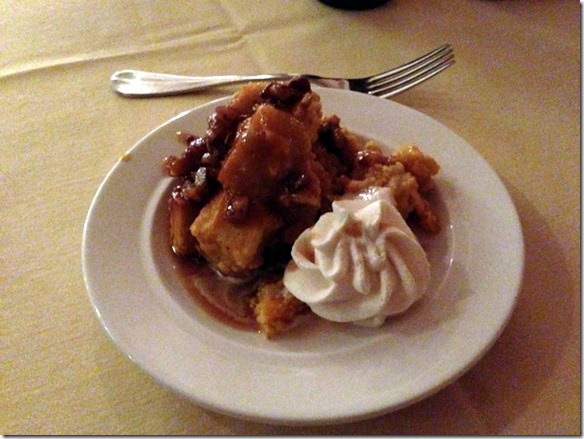 Jay got a bread pudding dish (which almost sort of reminded me of my overnight french toast casserole) and I got a slice of cheesecake. 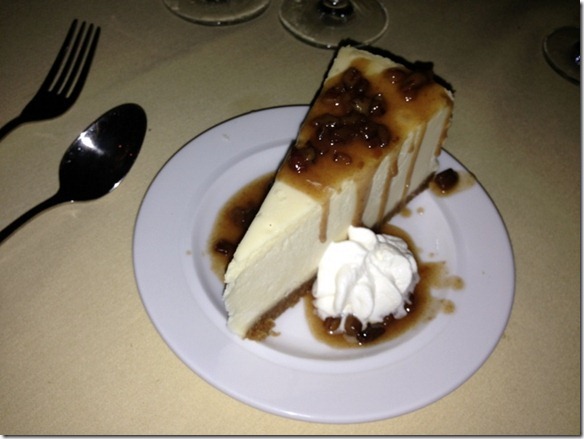 I gave up on the blurry photos and had to whip out the flash.

Both desserts were great, but the cheesecake was definitely my favorite. Sooo good!

The four of us made it out onto the dance floor a couple of times during the night, but I think I had more fun watching everyone else. They were just so much fun. It was certainly a bit different of an evening out for us, but we all had a great time!

Now we’ve made it to Sunday and I am feeling incredibly lazy…not quite sure how productive I’m going to be today.

« Stupid Toaster
I Did Manage To Do One Thing »