Jay and I had a little bit of fun with Cody after dinner tonight, but first, let’s talk about this dinner…because it was fantastic. 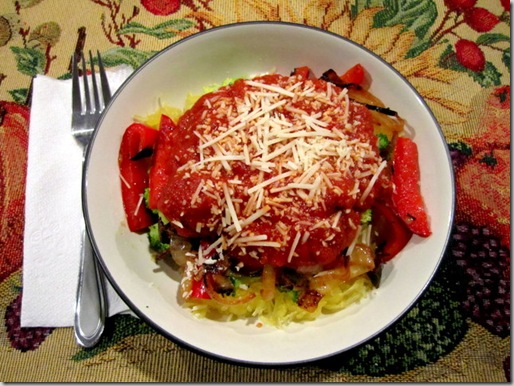 Last week, I received one of the most amazing packages ever from the Foodbuzz Tastemaker Program, complete with an abundance of Newman’s Own products. I received two different varieties of sauce, including this Tomato & Basil Bombolina which we incorporated into tonight’s dinner. 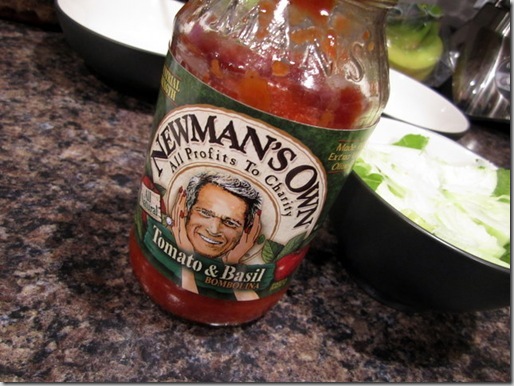 I also received three varieties of dressing, including this Light Caesar variety. Jay had a salad with his dinner tonight and tested out the dressing; I also sampled a taste and we both agree that it gets a thumb’s up. It’s not creamy like you’re typical Caesar, but more like a vinaigrette with Caesar flavors. Deeeelish. 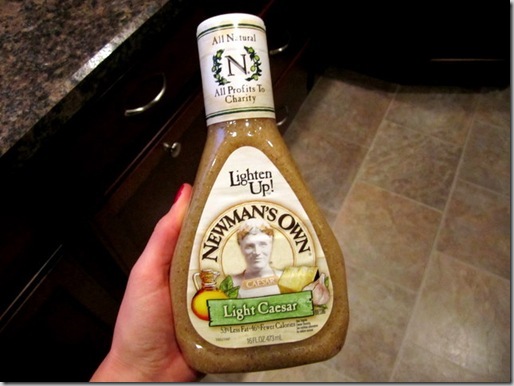 I have the other goods tucked away to try out later, after we use these two up. 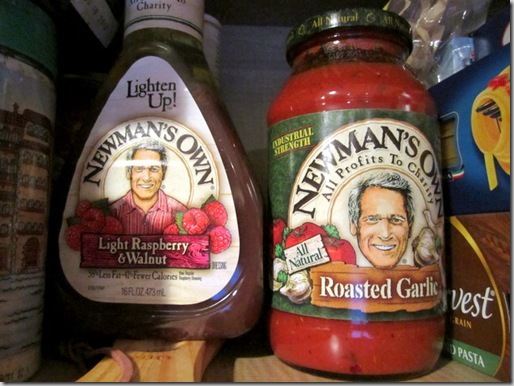 In addition to the sauces and dressings, I also received a coupon for a free frozen pizza, as well as this Flip video camcorder. I haven’t gotten a chance to try it out yet, but I’m pretty excited to give it a whirl. Any requests for the next vlog?? (I already know yours, Brenda!) 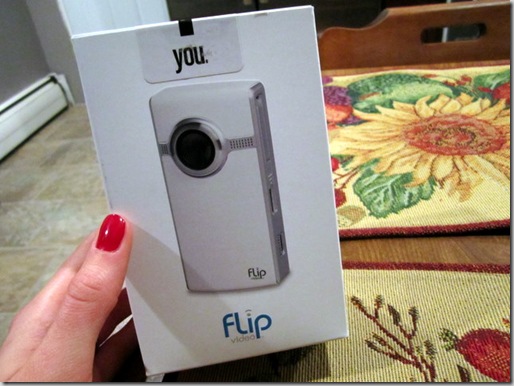 Thanks so much to Newman’s Own and the Foodbuzz Tastemaker Program for offering such a great opportunity!

So anyways, back to this awesome dinner. Last week, I ended up buying a small spaghetti squash thinking that I would make another batch of my Stuffed Spaghetti Squash.

However, by the time tonight rolled around, I really just felt like keeping things easy, so I nixed the stuffed squash and simply used it as a spaghetti substitute, topped with sautéed peppers and onions, steamed broccoli, sauce, and grated Romano cheese. 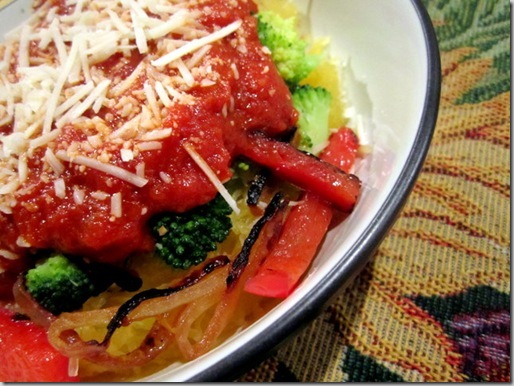 The sauce was actually a combination of the Newman’s Own sauce and some leftovers of my homemade sauce, so I was psyched to see that there was still a homemade meatball left in the batch. I love my homemade meatballs! (<—P.S. – Mom, if you’re reading, we’re down to one container in the freezer…it’s almost time to make some more!) 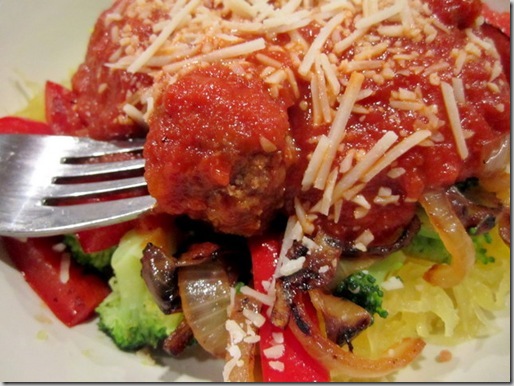 So now, after dinner. That’s when the fun began.

Cody had been lurking around our feet all during dinner, waiting for somebody to play fetch with him. Once we finally finished eating and were just catching up on our days, we decided to have him come and join us at the table. 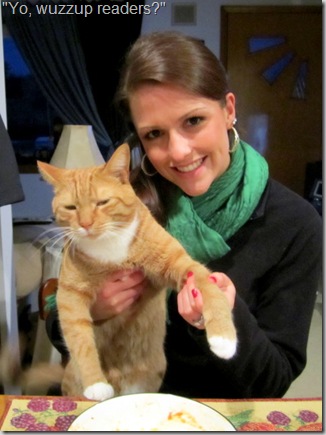 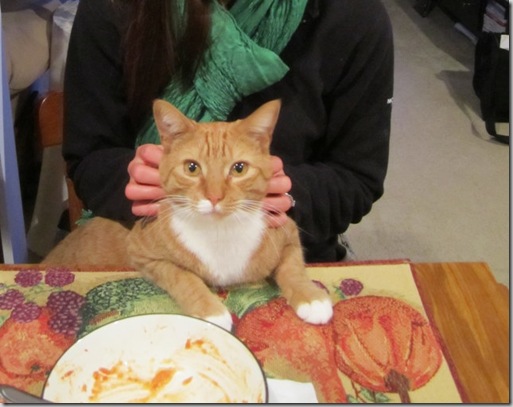 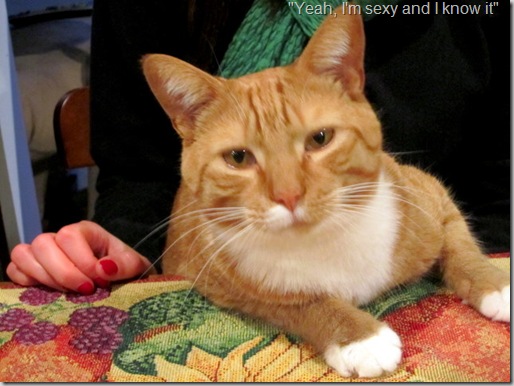 …but then he started warming up to the camera. 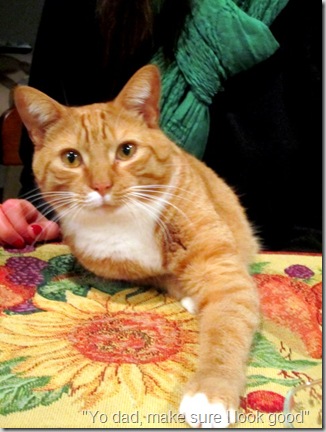 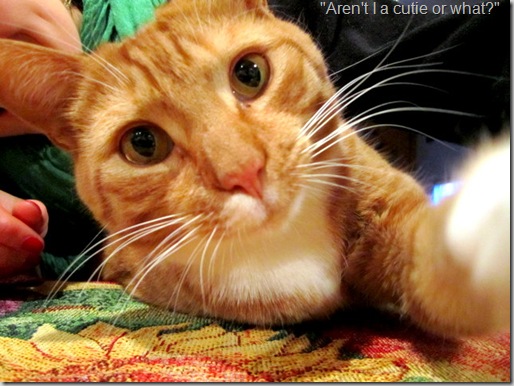 Eventually the fetch toy was brought up and he was alllll about fun and games. 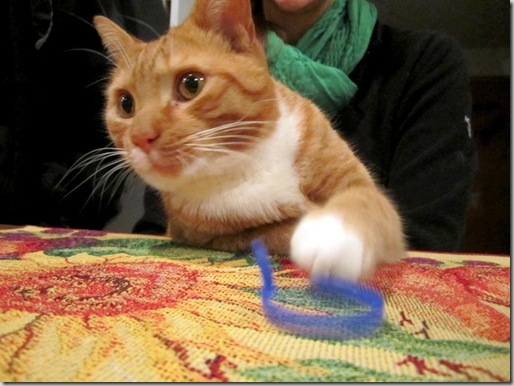 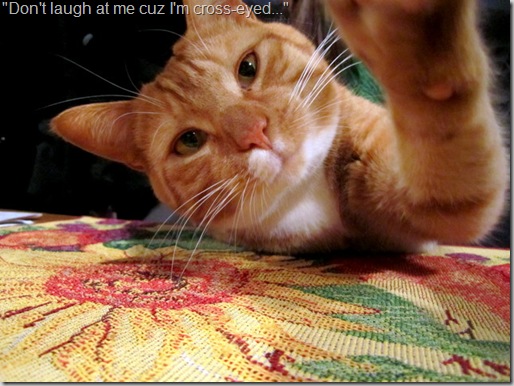 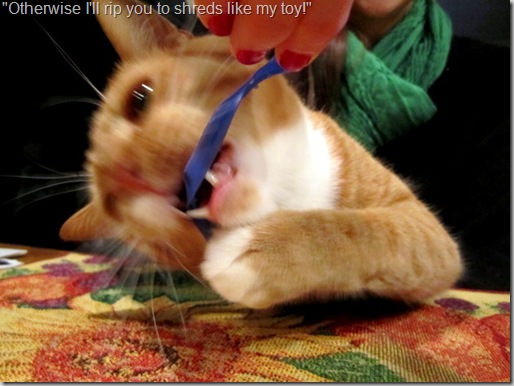 Needless to say, we definitely had a few good laughs at dinner tonight.

Now, I’m about to go end the evening the best way possible by snuggling up in my cozies and enjoying a nice big bowl of Cranberry Apple Crisp. YUM!

So far, we’ve only  had two trick-or-treaters, so I’m thinking that a) it’s going to be a quiet night, and b) Jay and I are going to have some Skittles to eat up. I think it’s a good thing I didn’t buy as much as I did last year!

What were (are?) your top three kinds of candy you would always hope for in your trick-or-treat bag?

Mine were (in order): 100 Grand, Twix, and Nestle Crunch. Eventually, once I learned to like peanuts, Snickers inched their way into the top three.

« He’s Getting So Big
Fat On Purpose »