Last week, I mentioned that Jay and I were working on a new little project at home.

Now, when I say “Jay and I were working” you can basically take that as, Courtney thinks of an idea and Jay does all of the manual labor in order to bring it to fruition.

So what’s the latest project you ask? (As if you didn’t already know it from reading the post title)…

A new DIY sandbox for the boys! 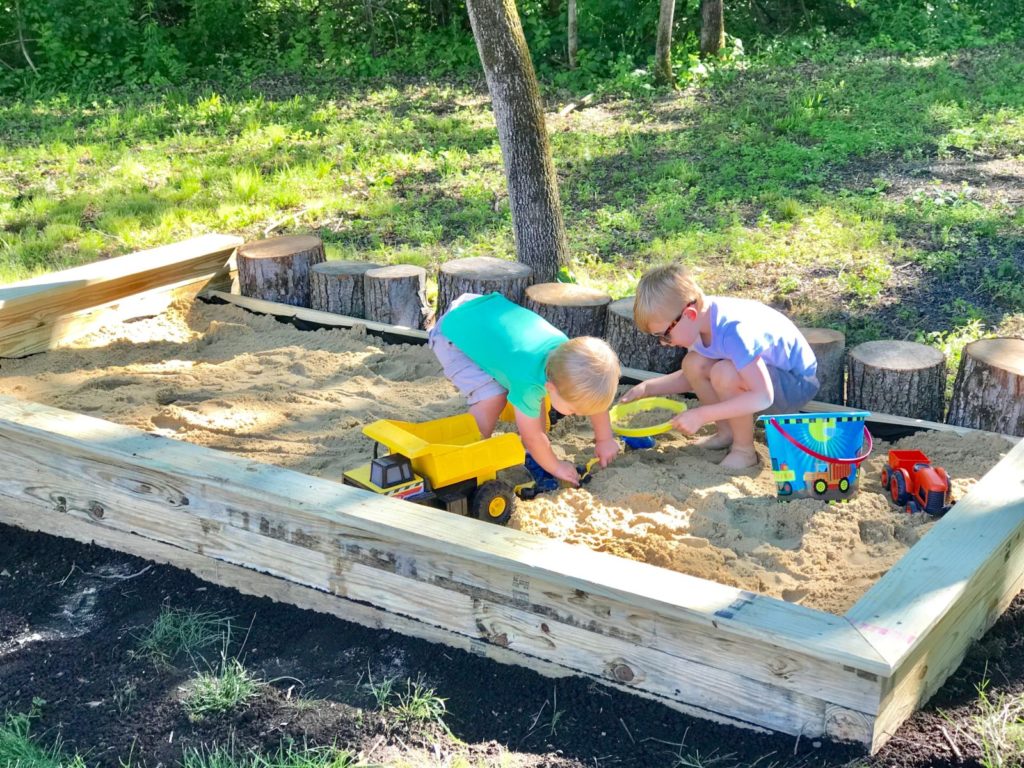 Technically, this is actually the third sandbox at our house. Jay had quickly put together a tiny one on the corner of our lot shortly after we moved in, since we didn’t really have a yard at that point. 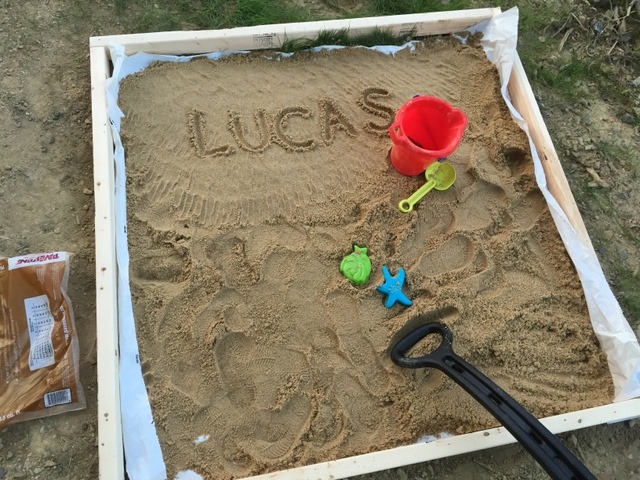 It’s still there, I think, but I’d be afraid to see what’s inside of it…it’s been abandoned!

Then, of course, there’s the little sandbox that we filled underneath the boys’ swing set. 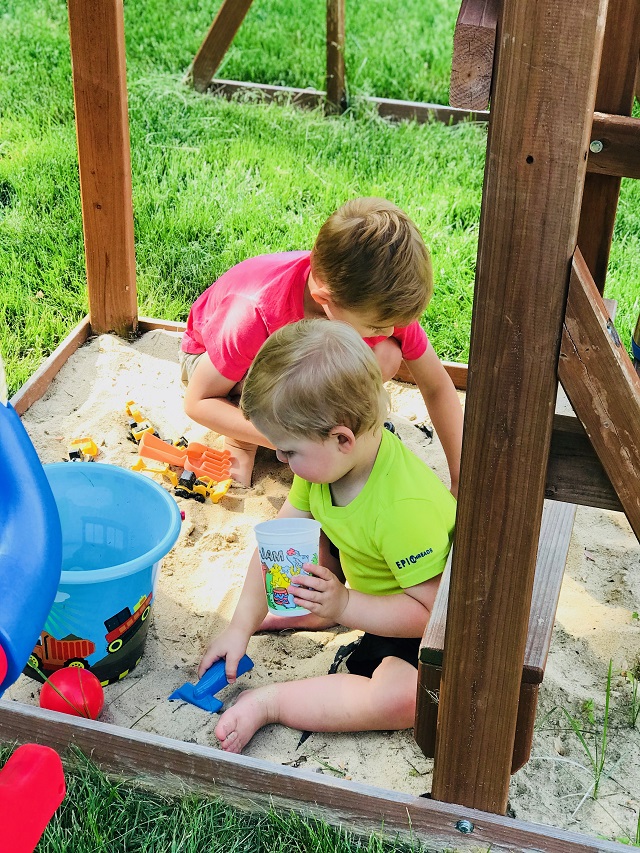 It’s fine and has certainly served its purpose, but it was always so cramped under there. Knowing how much the boys love playing in sandboxes, especially at their daycare, I’ve had a vision of building a nice, big one that both they and their neighborhood buddies can play around in.

So on our days off last week, we planned everything out and got to work! 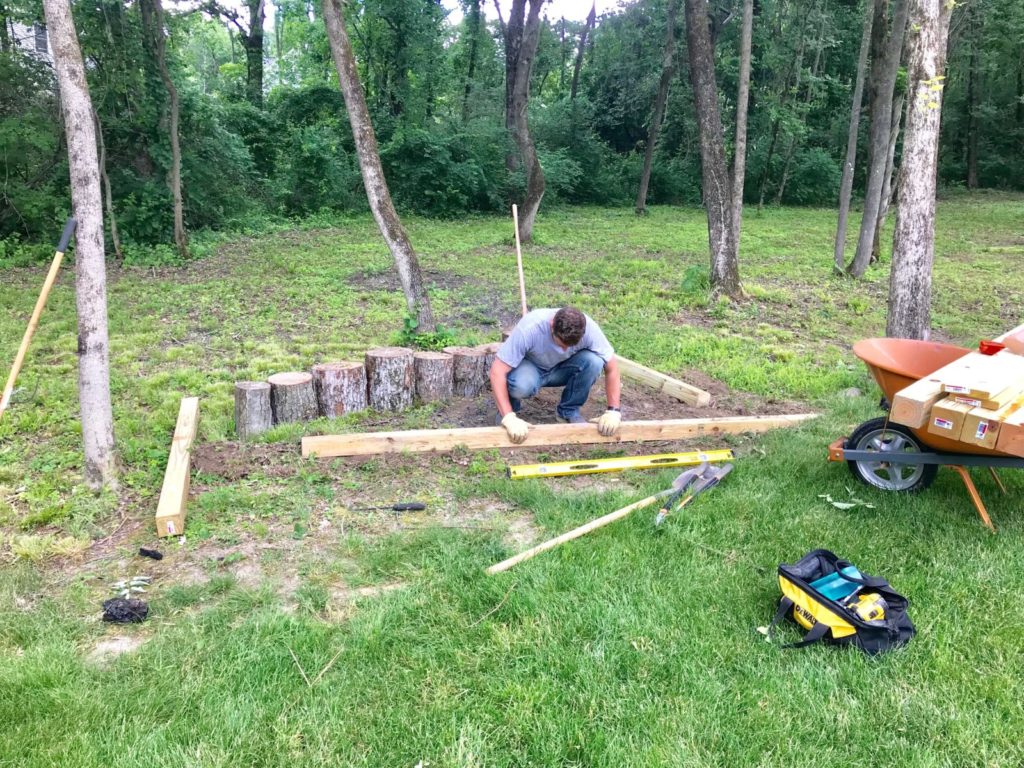 We eventually decided on a 10′ x 6′ size for the box, which was more than big enough, but the sizes worked great because there was minimal cutting for the 4×4 pieces of wood (we bought 10 ft pieces and 12′ pieces, but had them cut the 12′ pieces in half right in the store to make for the 6′ sides). We placed at the back edge of the yard where our “unfinished” space starts, so we wouldn’t have to cut up/out any of the grass that Jay works oh-so-hard at growing nicely (side note, everyone in the neighborhood gets a good laugh out of Jay and his grass obsession…he’s basically ALWAYS out there).

So I also knew that for one of the sides of the sandbox, I wanted to incorporate some of the cut logs from a tree that Jay had cut down in the backyard a couple of months ago (those of you who watch my IG Stories may remember that day…yikes). 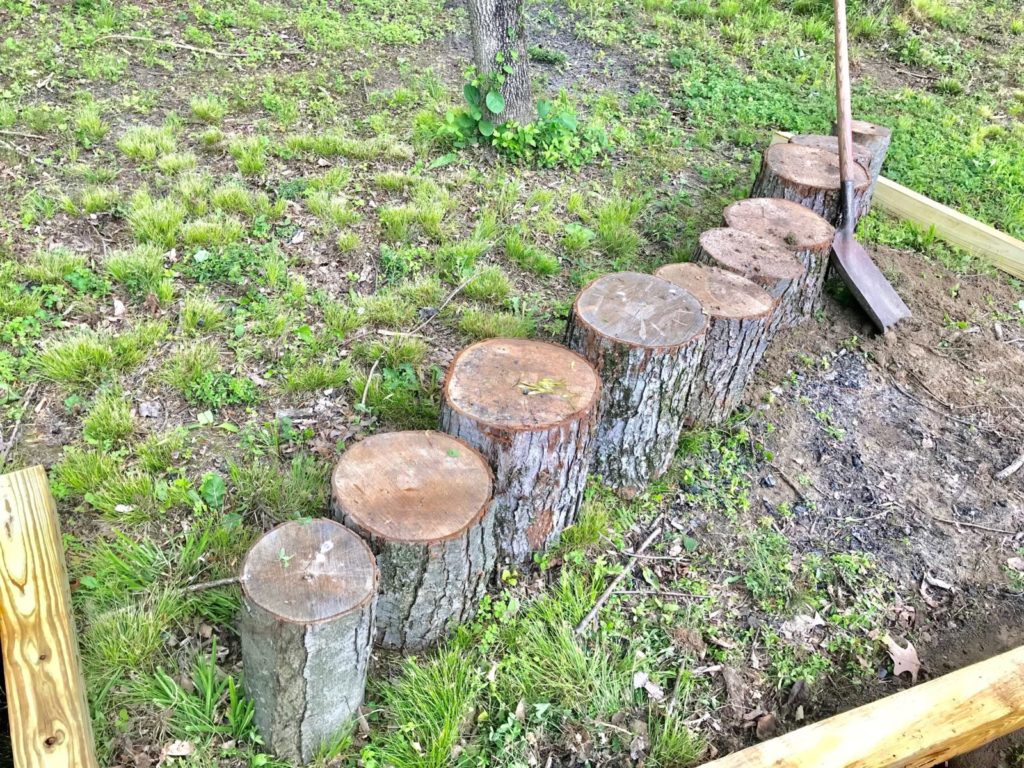 Most of the pieces were already perfect to use without changing a thing, so we simply lined them up along the back and brought the 4×4’s up to meet them at the sides. We also stacked the walls 3 boards high, to make for plenty of room for lots of sand. 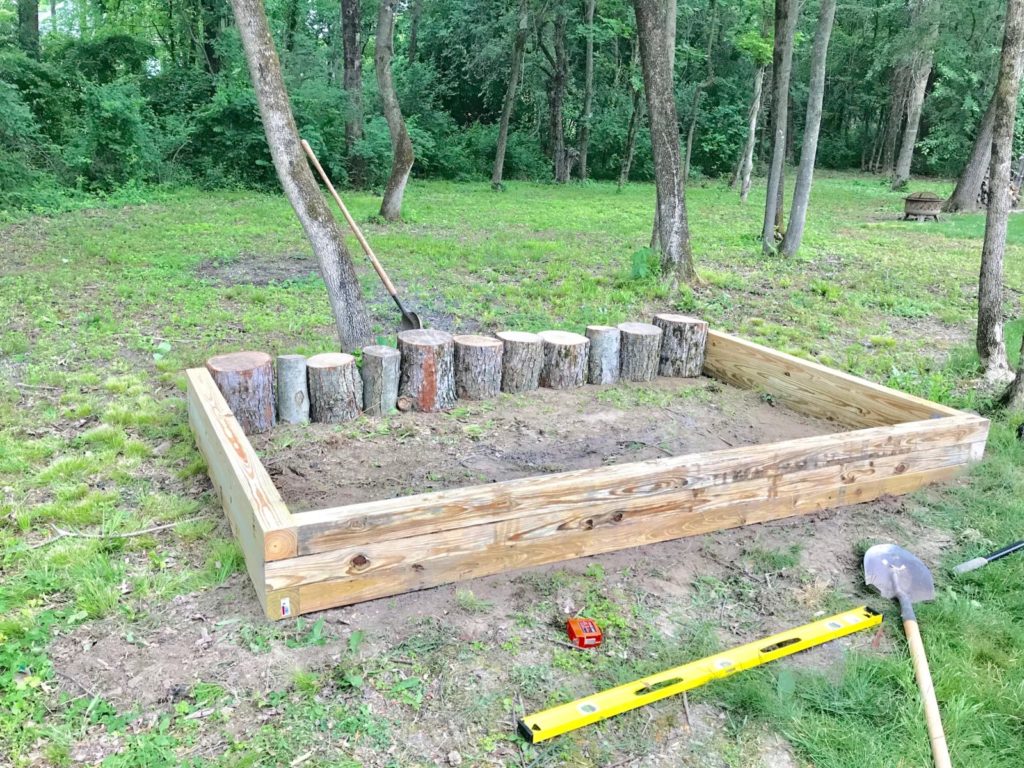 To finish off the top, and to make it easier for seating, we added 5/4″ x 6″ decking boards all around the three wooden sides of the perimeter. 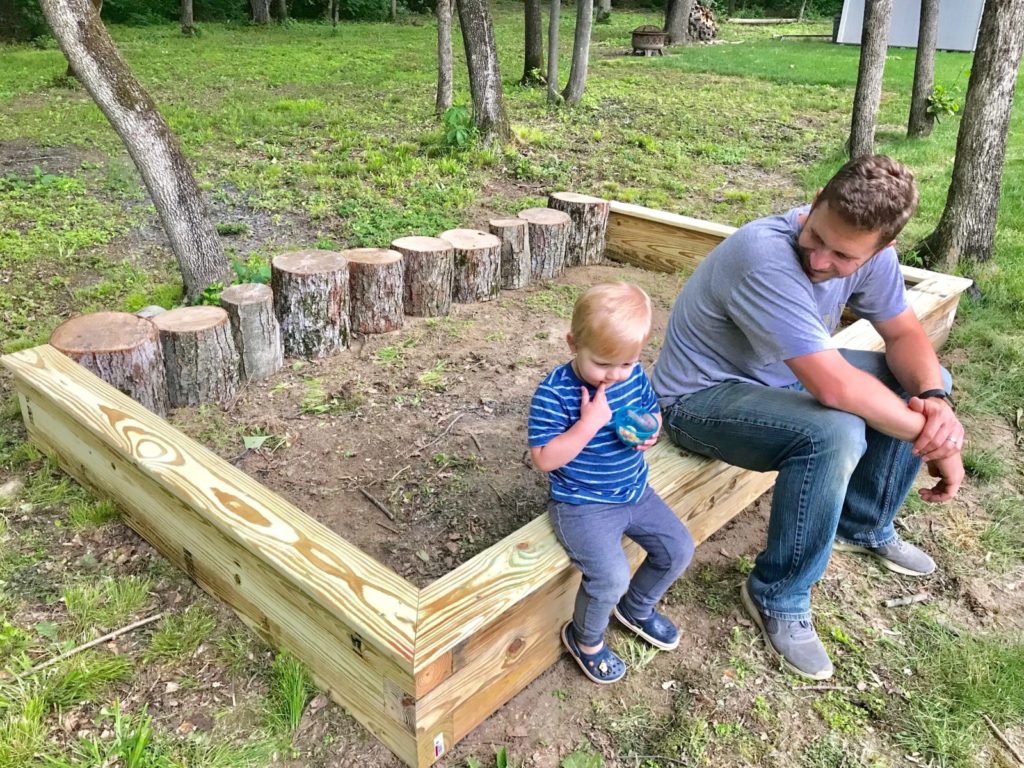 Once the box itself was constructed, it was time to finish and fill! In order to keep the sand from spilling out through the logs in the back, we lined the logs up evenly so we could secure them with a 1×6 screwed into the front. 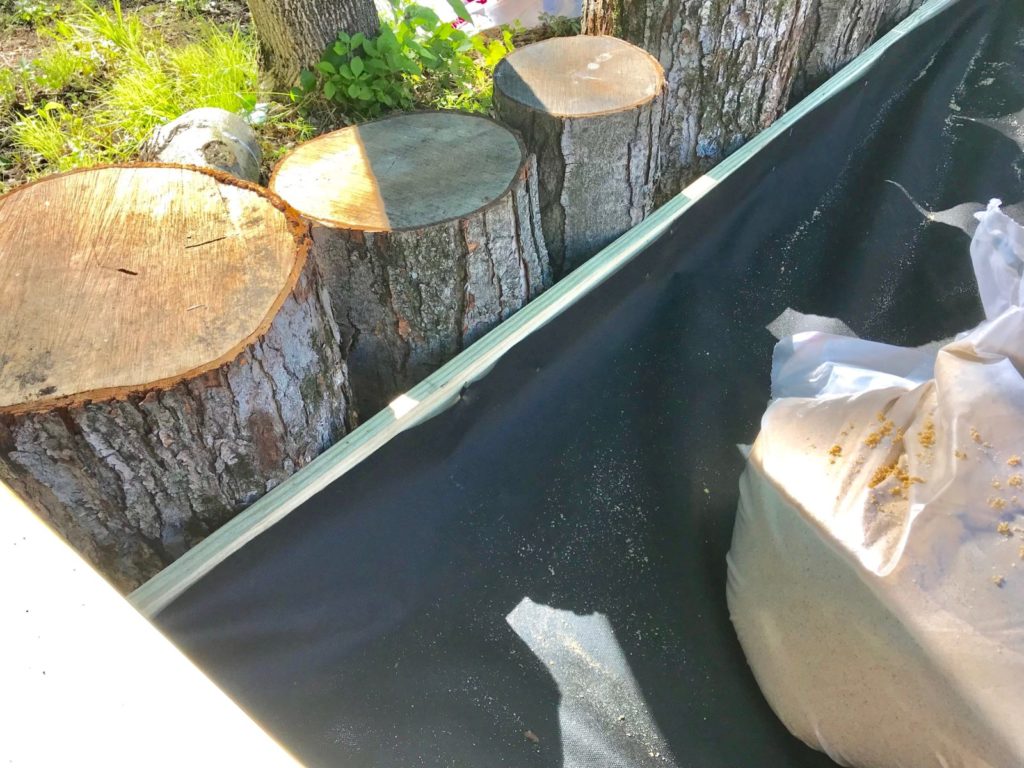 From there, we filled the bottom with a shallow layer of gravel (for drainage), then covered that with a layer of weed barrier which was stapled all around the inside of the box. Once those were done, it was time to bring in the sand. 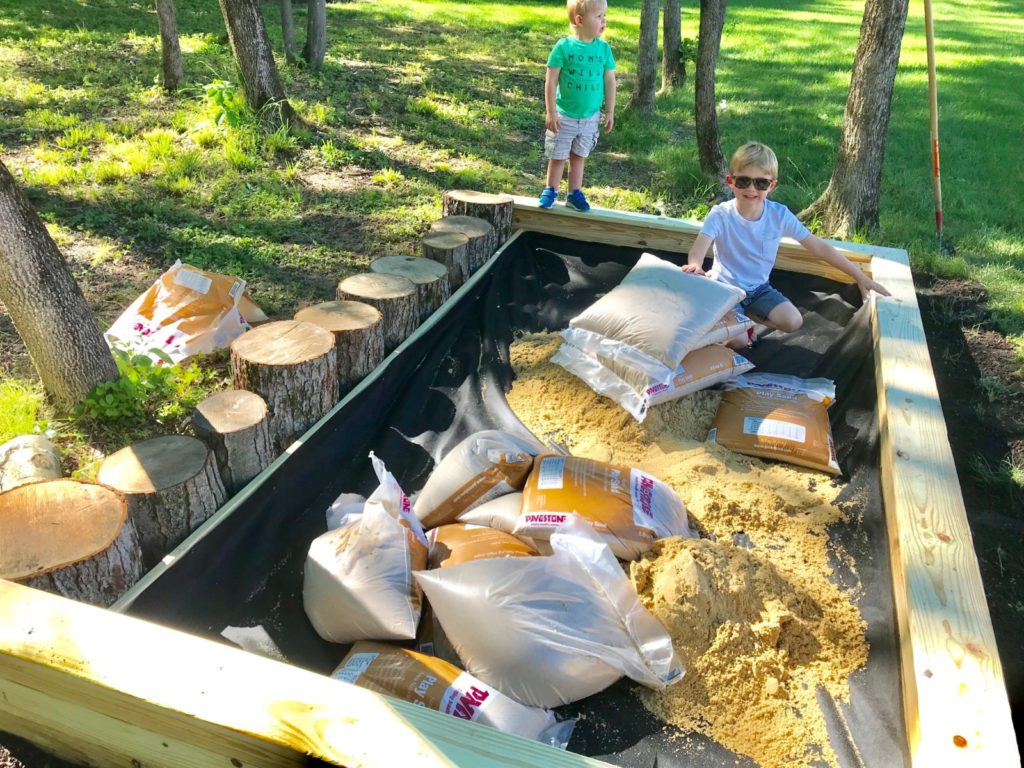 And hooooly cow, does it take a lot of sand. Right now we’re about 30 bags deep, and it could actually, probably use about 10 more. We started out with getting sand at Home Depot, but then Jay found it slightly cheaper at Lowe’s, and I also like the color of their sand better, too (it’s lighter and has a pretty sparkle to it!). 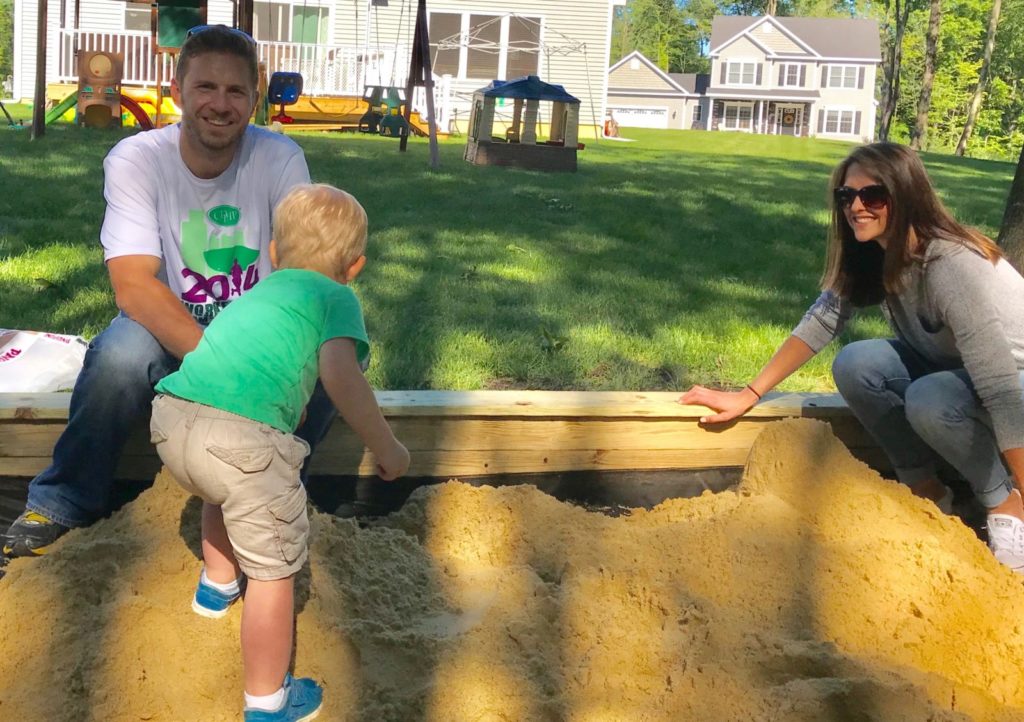 Eventually, we’ll stain the wood and we’re also thinking of possibly painting a road all along the top boards so that they can drive their cars around on it (because, Lord knows, we can’t have any less than a million of ’em here). But we’re both so thrilled with how it came out, and the boys have been playing in it just about everyday since it’s been built. 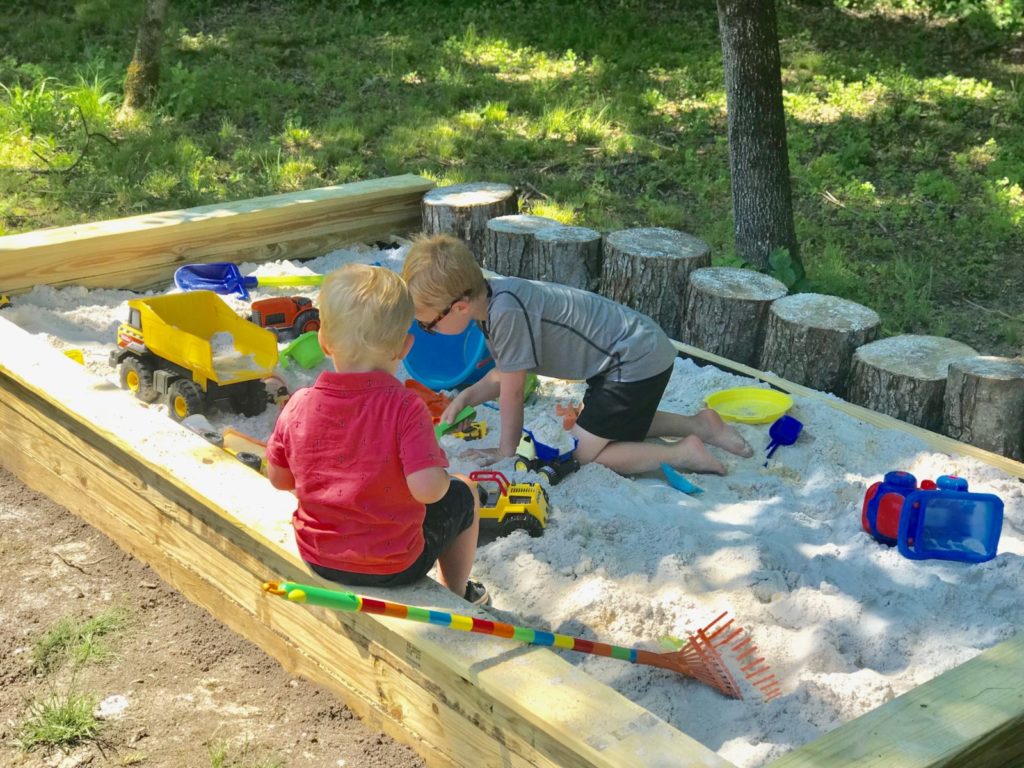 Now we just need to figure out what we’re going to do to keep it covered, and I also grabbed a big container of cinnamon from Amazon to toss in there to help keep the bugs away.

Surprisingly enough, the project was certainly quick enough to put together, but the cost wound up being wayyyy more than I anticipated (all that sand adds up quick!). In hindsight, we may have been able to find somewhere that would have delivered a small truckload for cheaper, but who knows. 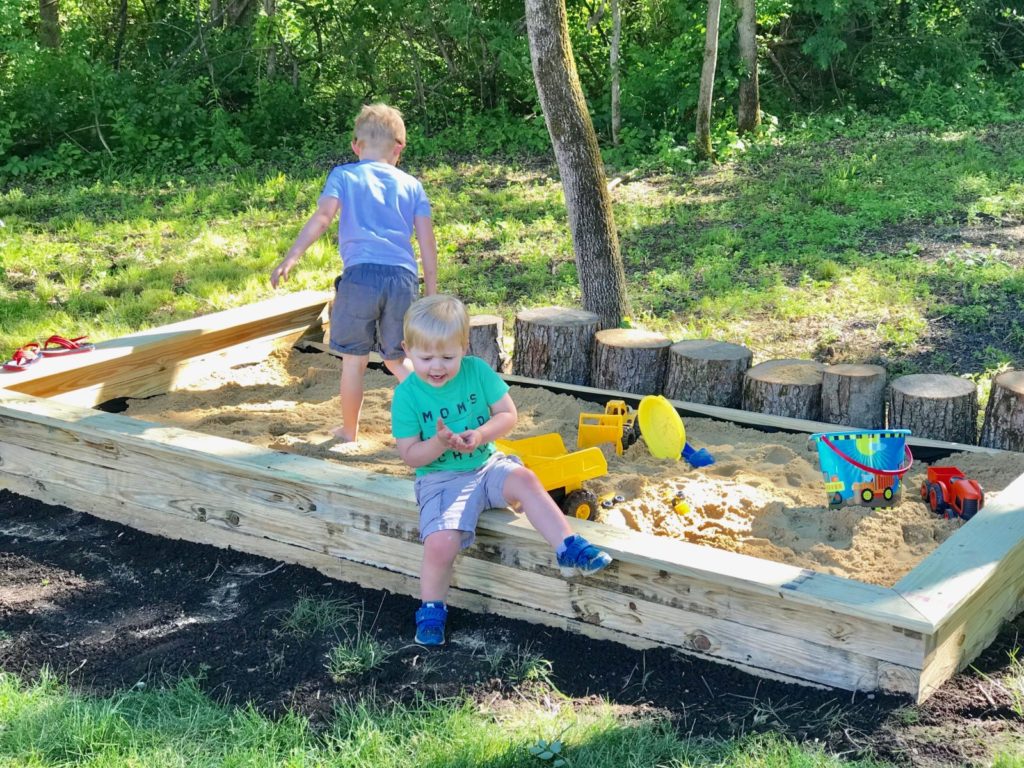 Besides, then it may not be sparkly. ; )