A few weeks ago, I ended up receiving a perk from Klout which entitled me to a $25.00 gift certificate to use toward One Hope Wine.

In case you’re wondering what the heck Klout is, basically it is a measure of a person’s social media influence (i.e. Twitter and Facebook) which also determines different topics that people are “influential” about. From there, people who are signed up for Klout will occasionally receive “perks” or offers, which coincide with the topics that he/she may be influencers of.  That’s about as detailed as I’m going to get on the Klout description though, since I still really don’t fully grasp the concept myself, so if you want to find out more, you can check out their website.

So anyways, back to that wine…

When I first noticed that I had received the perk, I wasn’t totally sure on whether or not I was going to take advantage of it. Typically, I just buy my wine from the store down the street, and paying more than $15.00 for a bottle is rare for me. However, once I checked out the website, I realized that this company really had a lot to offer, so I wanted to share it with you all today. 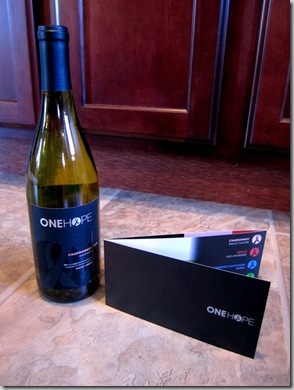 Each bottle of wine that One Hope sells has half of its proceeds donated to a specific cause, and with October being Breast Cancer Awareness Month, I thought it would be a perfect opportunity to donate to the cause. 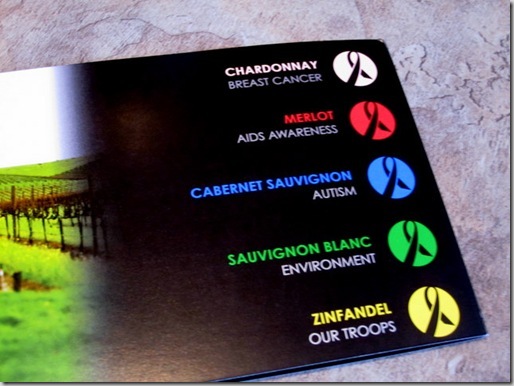 “ONEHOPE was started by eight friends who turned what started as a personal mission to help out a friend with her fight against cancer into a thriving business which is founded on a very basic, but compelling principle: giving back is good business. The eight founders started the company working out of their living rooms and selling wine out of the back of their trunks. Since the inception of the company in June 2007 the company has grown from 0 to well over 20,000 cases sold.” 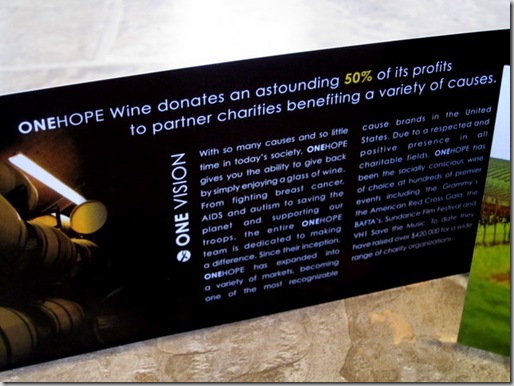 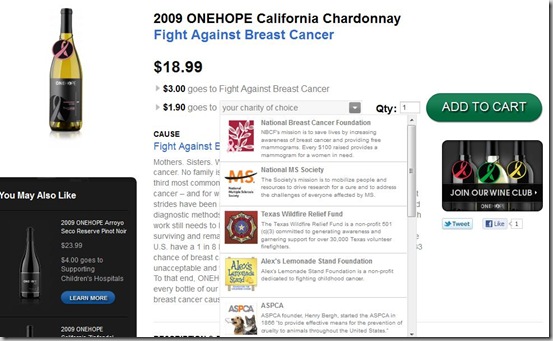 I absolutely loved this feature, which was what immediately sold me on utilizing my perk. When I ordered my bottle, I chose to have a portion of my sale go toward the Alex’s Lemonade Stand Foundation. This has long been a favorite charity of mine, so in case you’ve never heard of it, definitely check it out.

Before I even realized that the wines each represented a different cause, I already knew that I would choose the Chardonnay, so it turned out to be a win-win! 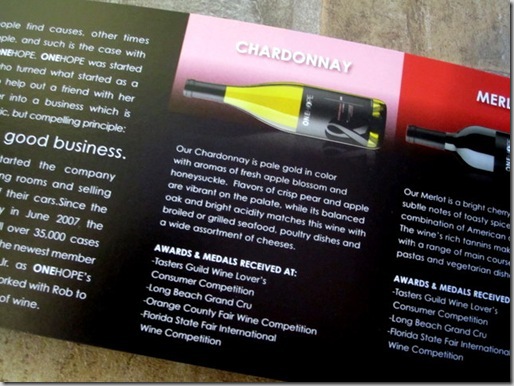 The Chardonnay was actually co-created with winemaker Rob Mondavi, Jr., which is another favorite of mine, so I’m excited to try it out. Jay and I haven’t yet had an opportunity to open it, but I really just wanted to let you guys know about it before the month of October comes to a close (it’ll be over before we know it!).

Either way, I think it’s just a totally awesome way to support your own charity of choice while enjoying a couple glasses of vino. 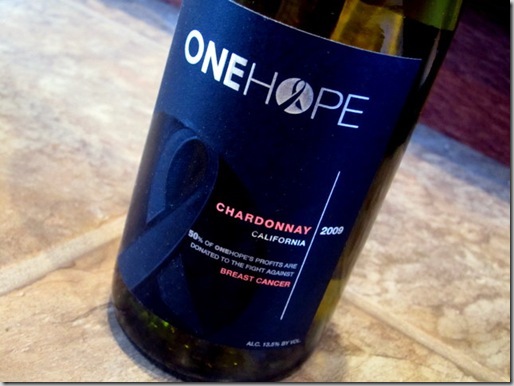 Don’t worry, I’ll be sure to let you all know how it is once we break into it!

*As a side note, I was not compensated in any way for writing this post. The Klout perk that I received is not at all related to my blog, and while I did get a discount on the wine because of that, I was not asked to write about it in return. This post is merely just my way of sharing something that I truly like and believe in!

What is your wine of choice (if any)?

What charity would you choose to donate to if you were to purchase a bottle of wine from One Hope?

« I Told You I Could Do It
The Littlest of Things »