Talk about a busy, fun-filled day!

Yesterday morning, I was up nice and early (once again) for a 6am train ride to New York City.

Besides having to walk a ways in the rain with no umbrella (yeah, that was a blast!), I had no problems with my train ride or making it to my final destination… 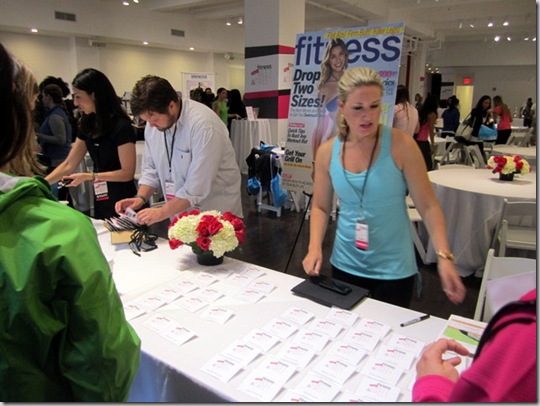 Fitness Magazine’s Meet and Tweet event! Before actually heading to the event I made a quick pit stop to meet up with Julie, Tina, Theodora, and Anne at the hotel to drop off my luggage. 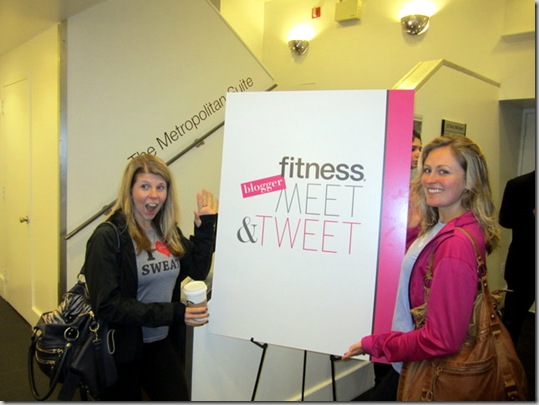 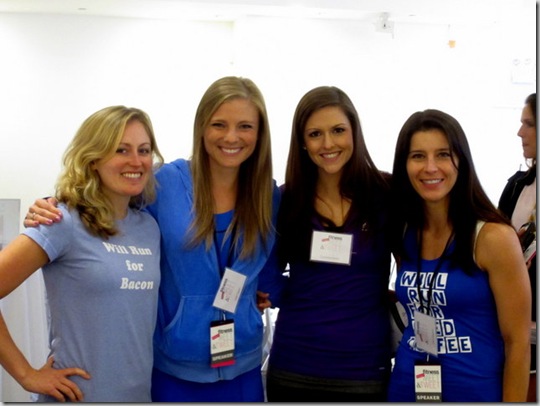 By the time we made it to the event, the place was already hustlin’ and bustlin’ with plenty of fitness-minded peeps. 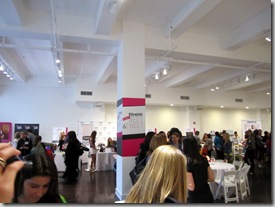 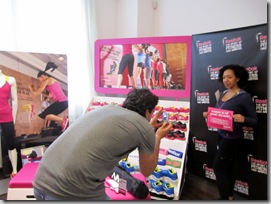 After signing in and grabbing our name tags, we headed around to meet up with all of the different tables who were there. One particular brand in attendance was Oakley, who totally blew me away with their different styles of sunglasses. 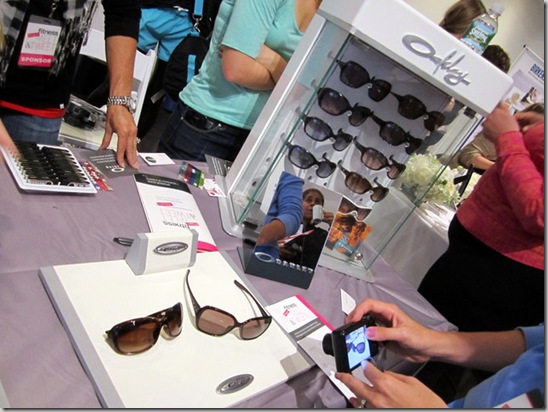 I guess I had long assumed that all of their sunglasses look like the pair that my brother always wears, but boy was I wrong. I opted for a pair of their Oakley Overtime Those things were SO cute – and I’m super psyched that I have a pair of my own now.

Also in attendance at yesterday’s event was Mia Hamm, which I thought was cool. 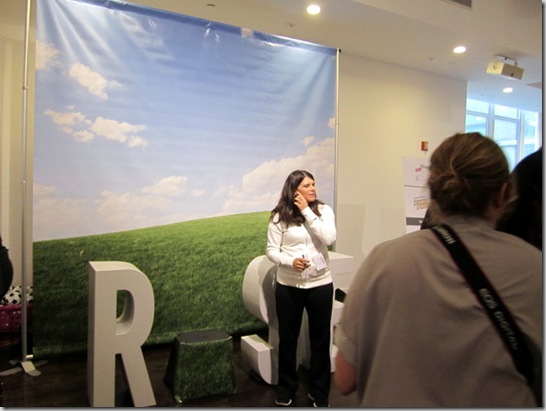 I, myself, have never really been much into soccer, but Jay is a soccer player so I guess I know a thing or two about the sport. I was planning on getting a signed soccer ball for him, but by the time I got around to it, Mia had already left. Sorry, Jay.

Julie (aka, my blog twin & roomie last night), on the other hand got an autographed ball for Ryan (err, should I say “Bryan?”). 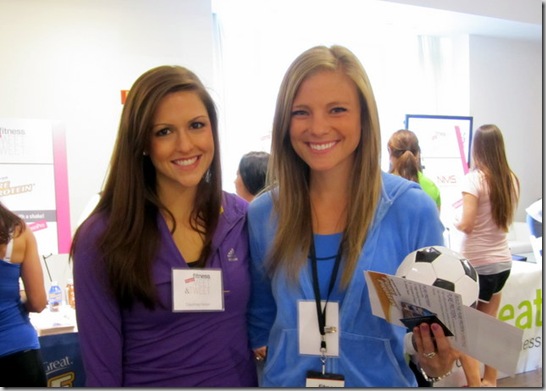 Shortly after arriving at the event, my hunger seriously started to kick in, so I was super psyched to see that there was a little snack station nearby. 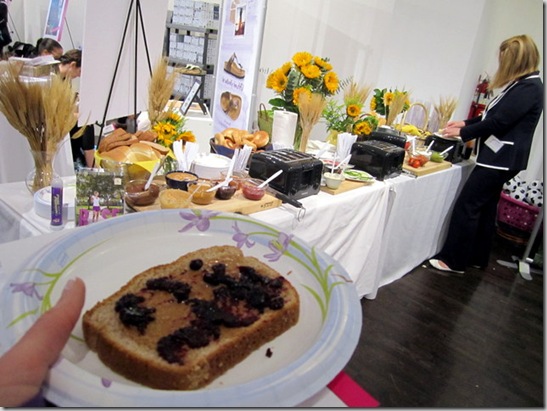 I made myself a piece of bread with almond butter and jelly which helped tide me over a bit until our actual lunch.

After spending a couple more hours walking around, chatting with friends, meeting new friends, and talking with vendors, it was lunch time. 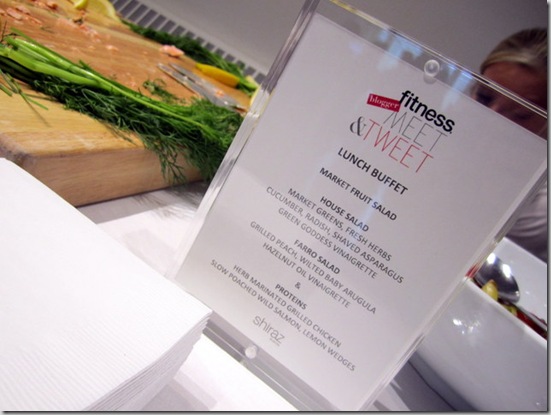 I was totally diggin’ the healthy variety of foods that they offered. 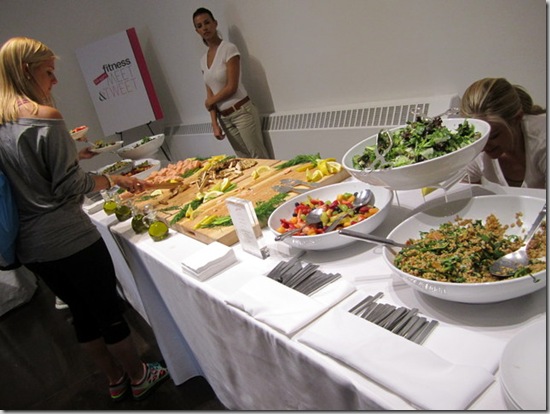 I filled my plate with a little bit of everything: house salad, farro salad, fresh fruit, salmon, and some chicken. 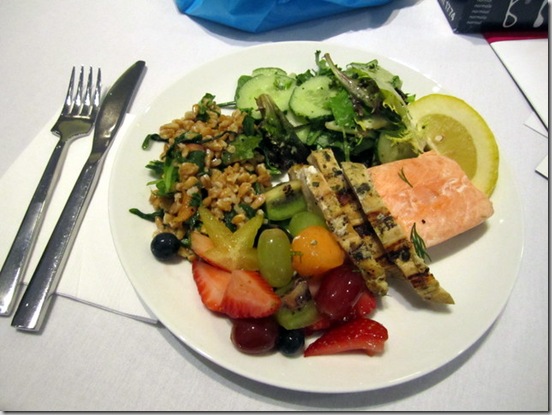 Everything was great, especially the farro salad, but I didn’t totally love the chicken. There was something weird about it…almost like it looked undercooked or something?

After lunch, we had a little more time to browse the sponsor tables and socialize with friends, which c’mon – let’s face it – is always the best part. 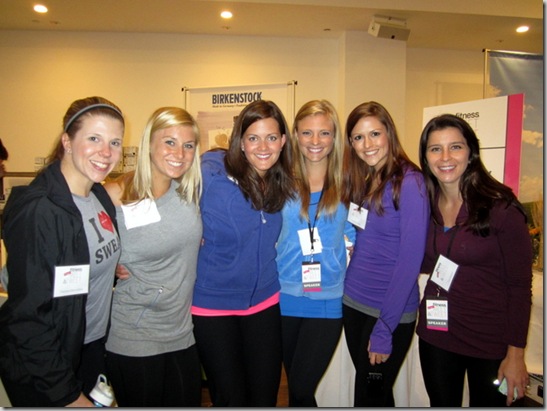 In the afternoon, I took some time to check out a panel that Miz, Kelly, Julie, and Tina were on. 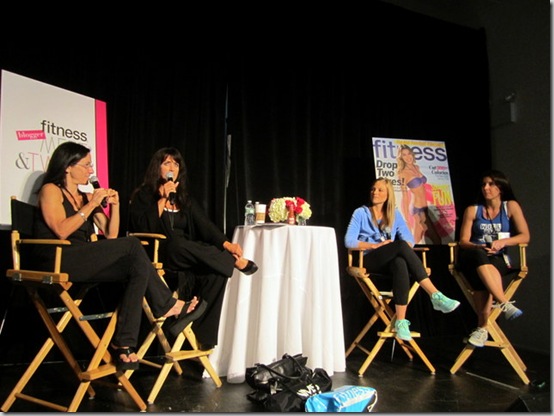 It was a fun Q&A panel and all four of them had some really great responses on how to make your blog into a business. It was actually probably one of the only panels I really sat down and listened to all day, but that’s just because I spent all of my time talking with everyone. Whoops. Just call me a social butterfly.

Toward the end of the day, things finished up with some mini cookies (which were AH-mazing) and a pop-up Tabura workout. 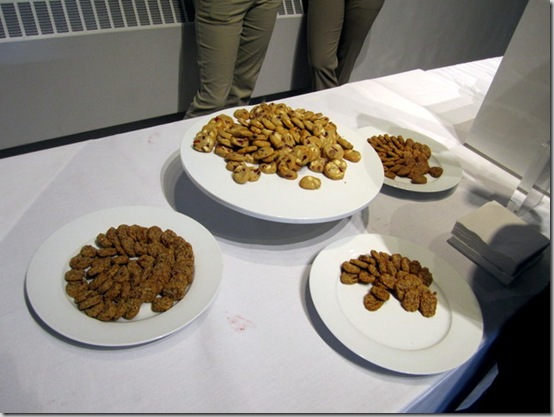 I actually really only participated in the abs portion of the workout at the end, but from watching everyone else, it totally seemed like quite the workout. Rather than using regular music, the instructor directed to live bongo drums, which was awesome just to listen to. 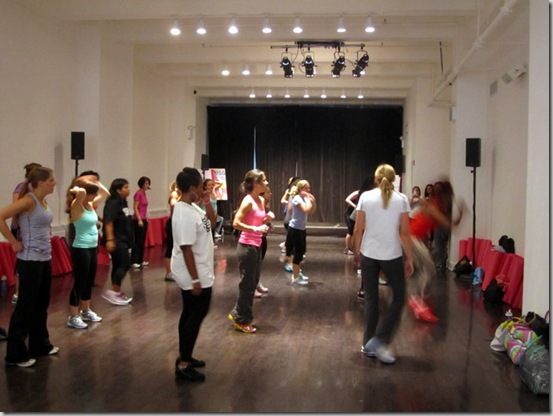 Finally, before leaving for the day, I made sure to pick up my swag bag. Seriously, how cute is this bag?!? 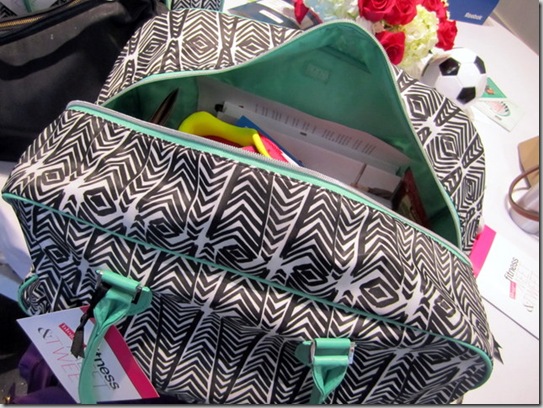 Our bags were filled with tons of goodies from Reebok(!), Camelbak, Vichy and more. 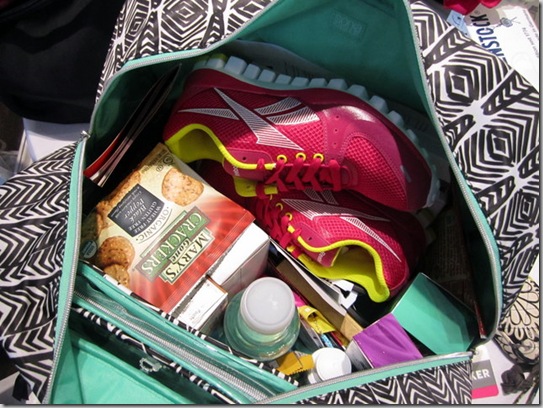 Honestly, I still haven’t even had a chance to go through it all, so there’s probably still a few more goodies hiding out in there.

Stay tuned for a recap from last night’s dinner soon.