1. Happy Fridayyyyy. I’m not sure why, but this week seemed to kinda drag by at a bit of a snail’s pace. I never thought Friday was going to make an appearance, but thank goodness.

2. I was SO excited when I got a blog comment the other day from reader, Amanda, letting me know that the HUE leggings are on sale at Nordstrom! I had so many of you tell me you loved them last month that I just had to order a pair (went with the charcoal). We’ll just have to see if they live up to all your hype, bahaha.

3. Jay shared this link with me earlier in the week and I just had to pass it along: Clues on Your Target Price Tag and 8 Target Shopping Secrets! There was some interesting stuff on there, good to know.

4. I shared this article last weekend on my Facebook page after my friend Kanika told me about it: 10 Ways You’re Making Your Life Harder Than It Has To Be. It was honestly the weirdest thing because I’m pretty sure the two of us touched on at least 7 of the 10 items on the list over the duration of the weekend. One in particular that we both really resonated with was item #3. I swear, since becoming a mom, I’m so quick to think the absolute worst and get so incredibly nervous over things as simple as a headache. 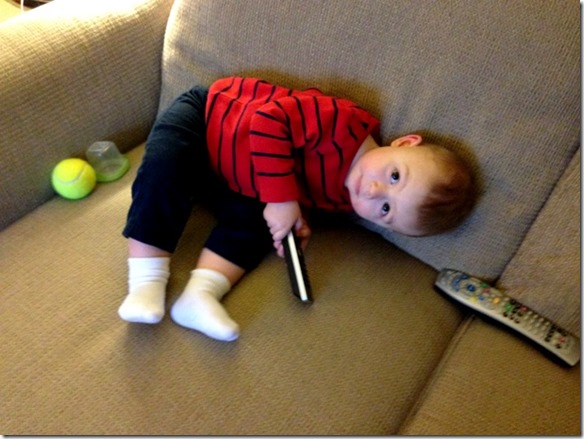 Oh, the things this sweet little boy does to me!

5. Tomorrow is our first attempt at what is hopefully going to be an annual Friendsgiving with some of our closest friends and cousins. I’m in charge of making an appetizer and a dessert and while I was originally going to make the pumpkin toffee cheesecake I made when I hosted Thanksgiving a few years ago, I’m thinking I want to do something different. Perhaps something easier to grab like, say, pumpkin bars? Cookies? Possibly these or these? I also need ideas for an easy app to make…preferably something cold that I can just bring and not have to worry about reheating. Any ideas for me???

6. Jay and I totally rearranged our living room this week! You might remember a couple of years ago when we went and bought a bunch of new living room furniture from Ikea. We also wound up totally redoing our living room at that time, too. Well, apparently two years is my max before I need a change. We decided to take the entertainment stand right out of the room and incorporated an old stand (pictured bottom right) again. 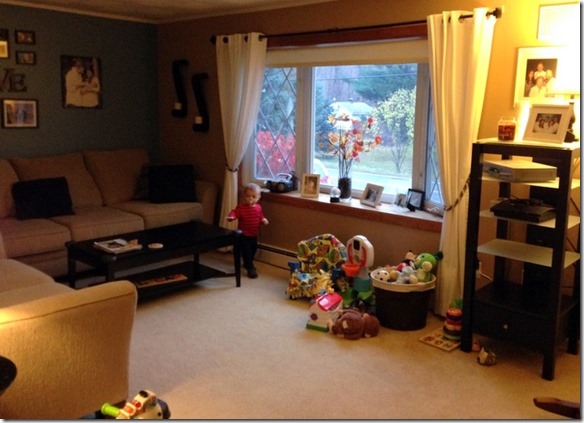 Funny enough, somehow what started as a “hey let’s rearrange the couches and TV stand” project wound up turning into the purchase of a new TV, running of new cable wires through the walls (thank goodness for a handy husband) and deciding to try to sell our couches (that we only bought last year) because we want something different. We’re nuts.

7. Said rearrangement from above has since left me with quite the blank canvas of a wall… 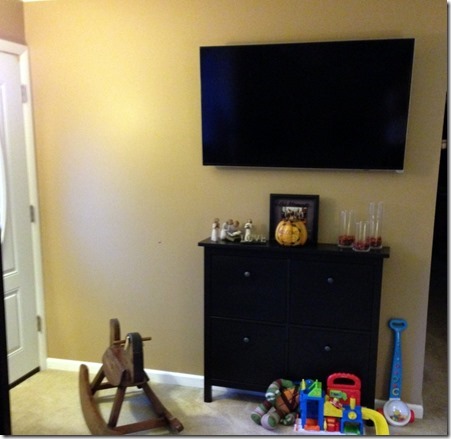 8. About two months ago, I ended up sending in a huge bag of clothes to sell to thredUP. I’d heard some stuff about it and my friend Morgan told me she had just made a good chunk of change on the bag she sent in so I figured I’d give it a shot (since I hadn’t earned anything by trying to sell them locally). They ended up offering me an upfront payment which wasn’t too bad, not great…but hey, better than nothing! And I’m pretty sure they donate anything that they can’t accept to sell which is what I would have done anyways. 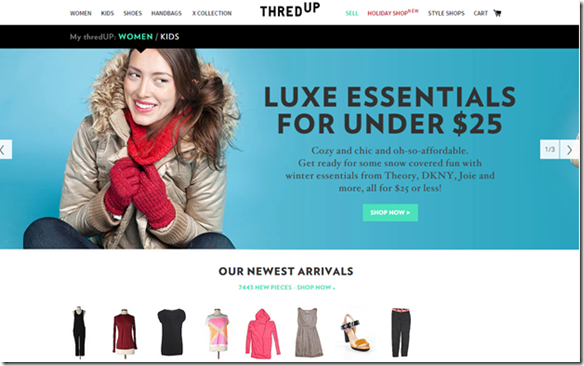 Right now, they’re offering $20 off of any purchase of $75 or more (affiliate link), and from what I can tell, it looks like you can actually get a good amount of merchandise for $75 since everything is marked down so much! Have any of you guys ever bought from or sold to thredUP? What have you experiences been like?

9. I’m going to give you guys a heads up…I have a few different sponsored posts on the horizon over the next few weeks. Thanks to me being not the most organized lately, I did a really bad job of keeping track of what I had committed to do, as well as when they’re due. I know I already told you guys this, but I do try really hard to space out my sponsored content so it’s not clogging up the blog too much at one time. I also made the decision to back out of two of them just because it was too much. I promise though, it’s some cool stuff! And of course, if they’re not your thing, just skip on by for the day.

10. I’m on the lookout for a really great wool coat for this winter. I haven’t had a good one in at least three years, and it’s about time. 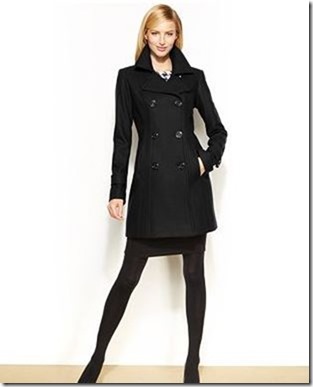 If anyone has any recommendations on one, please please share! Preferably, I’d like to spend no more than $150…black…maybe belted like this one or this one? Then again, that one above without a belt is cute, too…

11. Jay and I ordered the new iPhone 6’s about a month ago and Jay’s arrived at the house on Wednesday…but mine was a day behind. Then they tried to deliver it yesterday, but since we weren’t home they wouldn’t leave it. So now I have to wait even longer. Man, I cannot wait to finally get my new phone so I can actually take pics without having to delete any beforehand… #firstworldprobs.

Alright my friends, I’m off for today! Hope you guys have a fantastic weekend ahead!