Fridayyyyyy. Ohhh, I love the sound of that word.

With all that has been going on in the world this week, I sincerely hope that everyone is able to find some time this weekend to relax and enjoy some time with loved ones. Thoughts and prayers continue to go out to Boston, Texas, and everywhere else that has suffered tragedy this past week.

1. I am so, so thankful for borrowed maternity clothes. I’m trying SO hard to not buy many more because it just kills me to pay the money for them. I’ve been trying to get my hands on anything borrowed that I can, and my MIL recently sent over a couple bags of clothes from a friend of hers. Luckily, I was able to find a few pieces that could work, including this old Gap top that I wore yesterday with maternity leggings. Oh, and speaking of maternity leggings? They are basically the best things on the planet, and I want to live in them forever and ever, even after Baby Tooth is here. 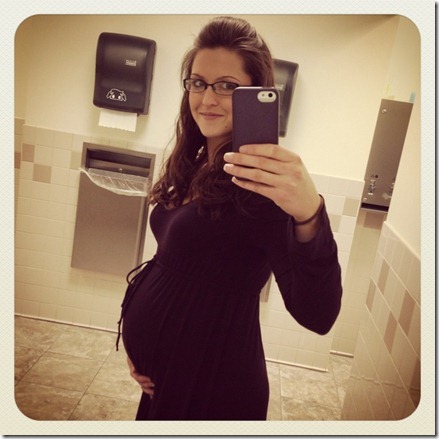 27 weeks and growin’ right along!

I also had some fun playing around with my straightener yesterday…I’ll tell ya, the only way my hair will hold a curl for the whole day is by using the straightener. (In case you’re curious, I basically do the same method as this YouTube tutorial…only I’m not nearly as efficient or patient while doing it, and I don’t use extra product either).

2. I am so, so over hearing Justin Timberlake’s new song, Suit and Tie. The radio stations in my area have done an amazing job of overplaying it beyond belief and have totally ruined it for me. His song Mirrors, on the other hand? Totally loving that one…for now. That is, until the radio stations ruin that one too.

3. On a different note, there is one artist that I currently cannot get enough of. Yes, I’m sort of obsessed with Macklemore. Not in the “oh my gosh, he’s such a hottie” sense…it’s really just because I could listen to his music all day long.

P.S. – As a side note, that photo above came courtesy of The Berry…have any of you guys ever checked out that site?

Every once in a while I’ll pop in to see what’s on there, and it’s pretty cool. You might remember me talking about Jay’s obsession with The Chive (as evidenced by one of his Christmas gifts this past year). Well, it’s basically like a girl’s version of The Chive…it’s pretty sweet.

4. Last night, I woke up at about quarter to two in the morning and was absolutely famished. I had no good reason why I should be, since I had eaten shortly before bed. But it was so distracting that I had to get up and wound up eating a granola bar. I honestly think that is the first time during his pregnancy that hunger has struck like that in the middle of the night. Crazy.

5. Speaking of the what I ate shortly before bed last night… 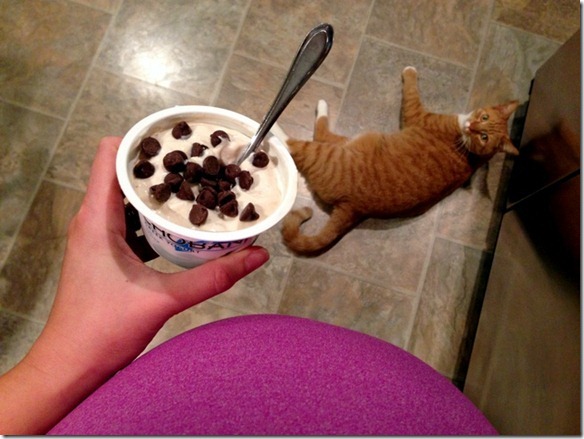 I made a little dessert out of a plain Chobani mixed with a couple drops of vanilla stevia, 2 tbsp of chocolate PB2 and some chocolate chips. It totally hit the spot. Cody was jealous.

6. That delicious snack from above was enjoyed shortly after finishing an after-work workout. Yeah, look at me! I was shocked too. I decided to do my Summer Sanders’ Prenatal DVD and it provided a pretty nice little burn. I’m definitely already starting to feel the difference in my muscles as I’m working out though…they get tired sooo much quicker.

7. Would you believe that at least once every couple of weeks I totally forget to put on deodorant before leaving the house? Not to worry, as I keep a spare in my desk at work, but seriously. How does it continue to happen? I have no idea either…

8. Tomorrow morning I have my monthly breakfast date with my bestie, Heather. We’re still not sure where we’re going yet…but no matter where we do wind up, I’m already trying to decide if I want an omelet or pancakes. Tough decisions.

9. I’ve been having some fun on Pinterest this week…how stinkin’ adorable is this outfit? I want to find something like that for our little guy now in the worst way. I can’t even take it.

I also found this pin yesterday and found it not only amusing, but rather fitting for Yours Truly… Story of my life these days. ;)

I tried to come up with a 10th, but I’m fresh out of ideas. Ahh well. Have a great, great day everyone!

« A Little Mellow
A Busy Weekend Wrap Up »