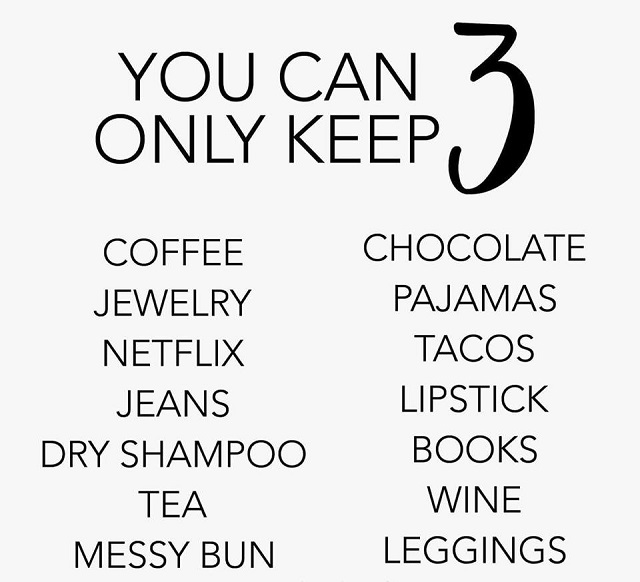 I’ve seen all varieties of these types of posts/graphics, but I think this is the toughest I’ve seen thus far! If I HAD to choose, I’m gonna have to go coffee // messy bun // wine. Does that make me a total cliche or what?

2. There’s a new favorite snack I’ve been enjoying lately, after seeing Ashley post about it on Instagram: rice cakes topped with deli chicken and Muenster cheese! 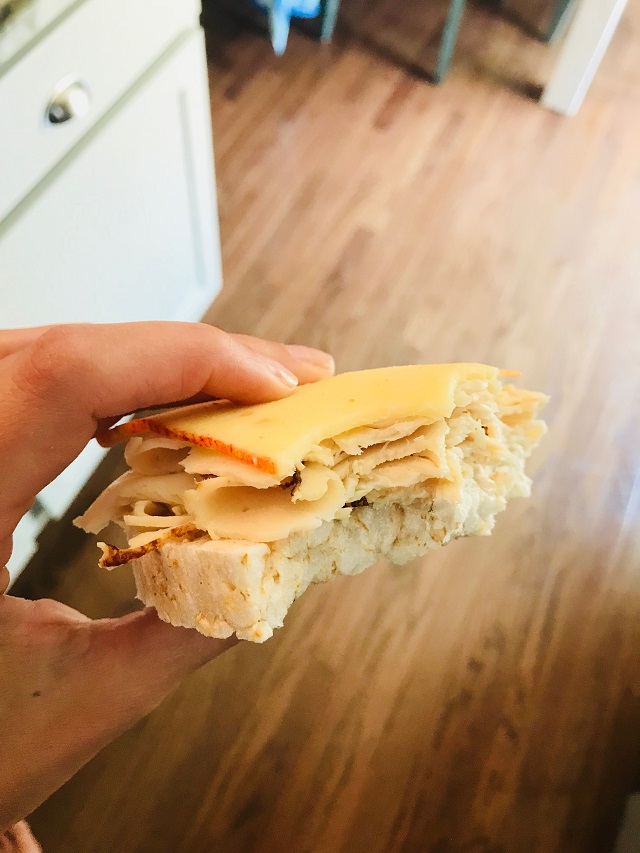 I’m not a huuuuge cheese person (unless it’s melted, like on pizza, or quesadillas, or…you get the idea) but Muenster cheese is pretty freakin’ delicious. How have I not realized this until now?!

3. I had been waiting, and totally forgot that Emily Giffin’s new book, All We Ever Wanted became available earlier this summer so I downloaded it over the weekend and I’m loving it. 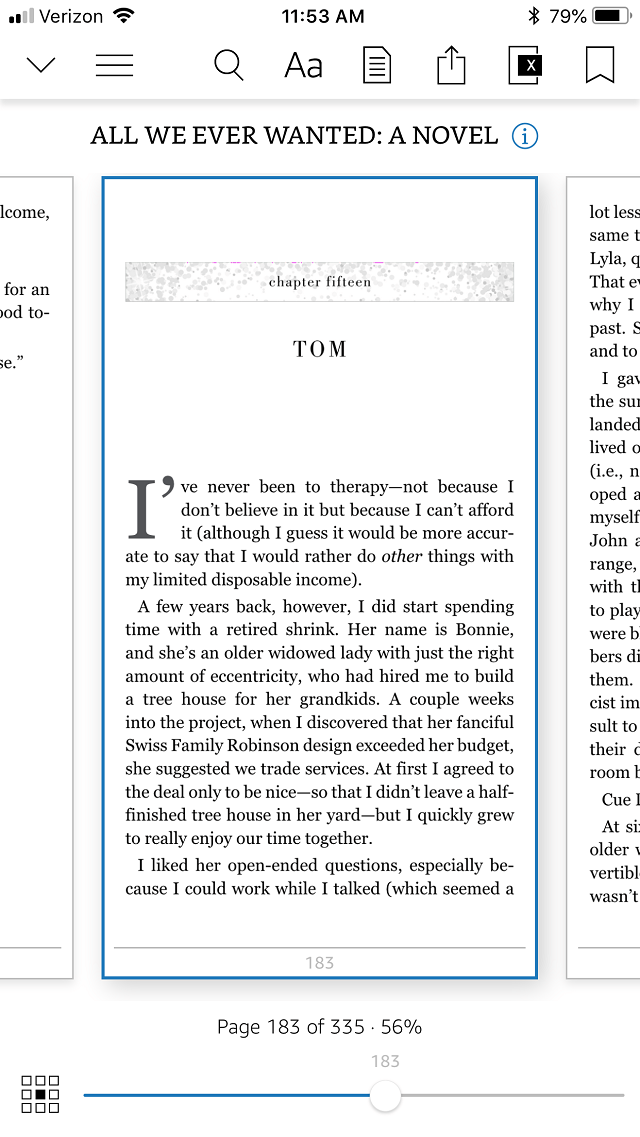 I honestly don’t think there’s an Emily Giffin book I haven’t enjoyed, but I also just realized that I haven’t yet read First Comes Love. So I’m pretty sure I’ll be downloading that one next. Any other Emily Giffin fans out there?? 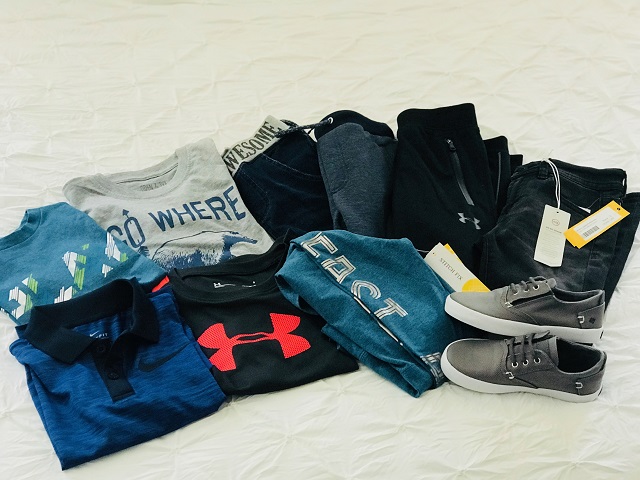 Trying to convince him that trying all of his new clothes on was super cool was a bit of a challenge, but he was a trooper and managed to try on all of the 10 pieces that arrived. Style-wise, I’d say that they did a really awesome job of picking out a good variety of what he likes, but size-wise, I lot of it was borderline too small (aka, fits okay now, but won’t last long at the rate he’s growing!). 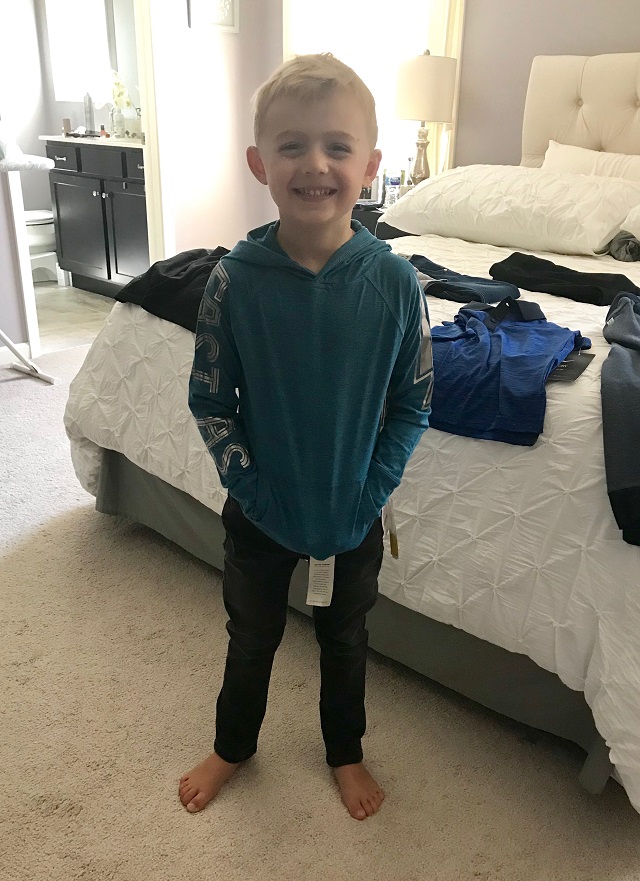 I had to laugh when he tried this shirt on, looked in the mirror, and say “Oooo, mom, this is a daddy shirt!” 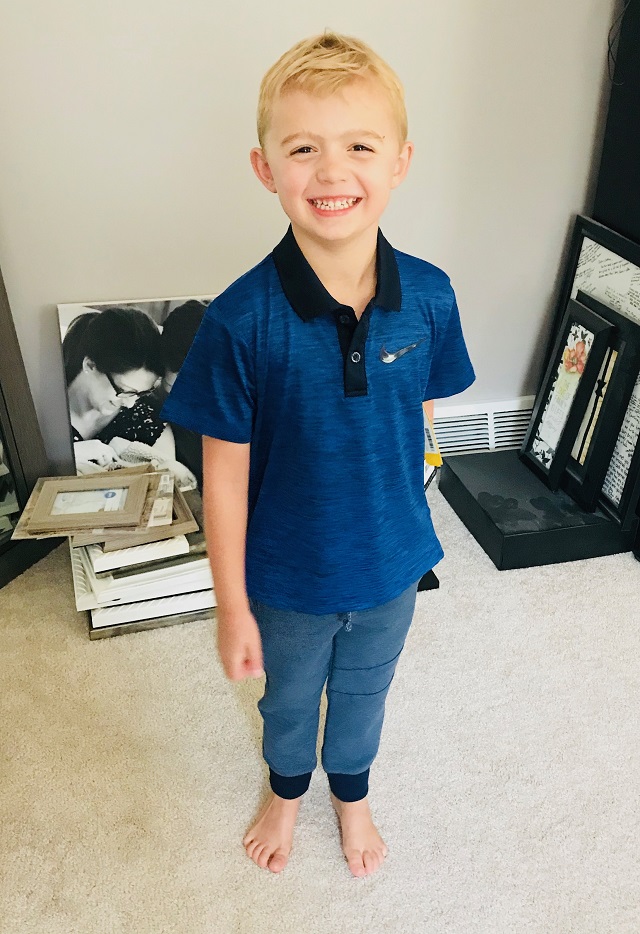 Haha, that it is, buddy. After all was said and done, I wound up keeping four out of the 10 items, including a t-shirt and long sleeved shirt (both of which were SO SOFT), an adorable pair of black skinny jeans, and this pair of Sperry’s sneakers because, c’mon…how adorable are they?! 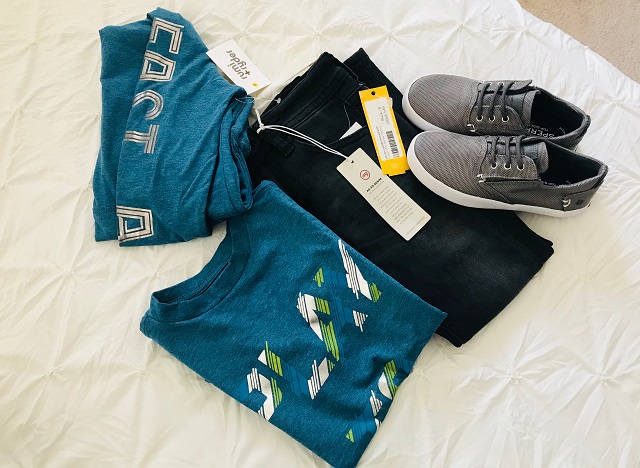 Have any of you tried out a Stitch Fix box for your kiddos yet?? 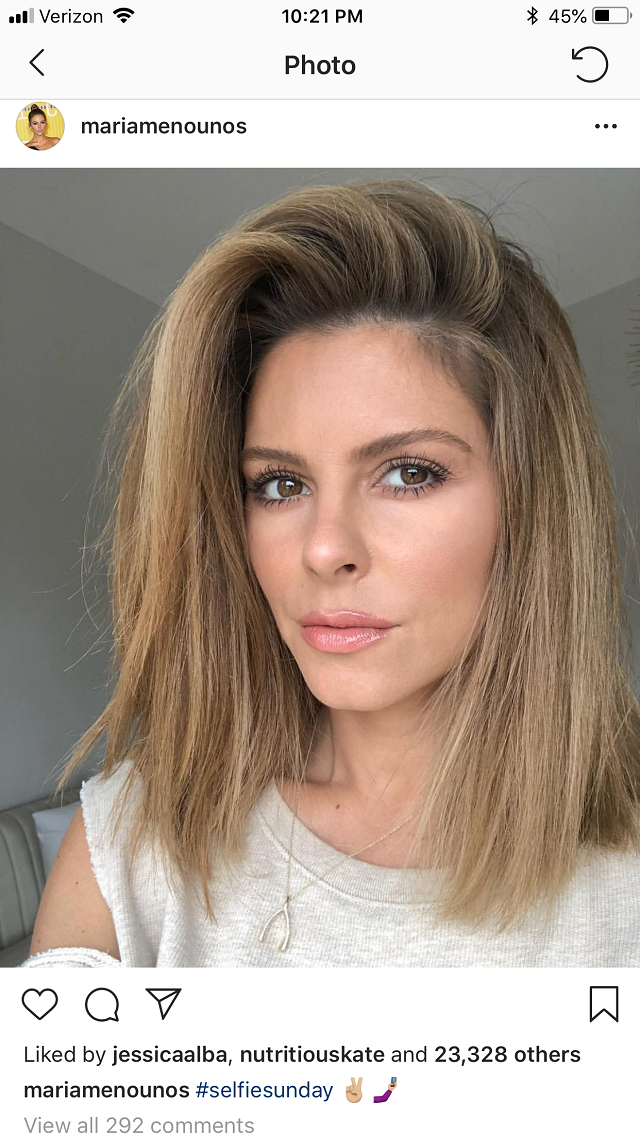 I mean, I find her stunning anyway, but those eyebrows are pure perfection! If only I hadn’t gone rogue on mine in junior high…

6.Speaking of back in the day, albeit a little later on in high school for me anyway, anyone remember/love Nelly?! 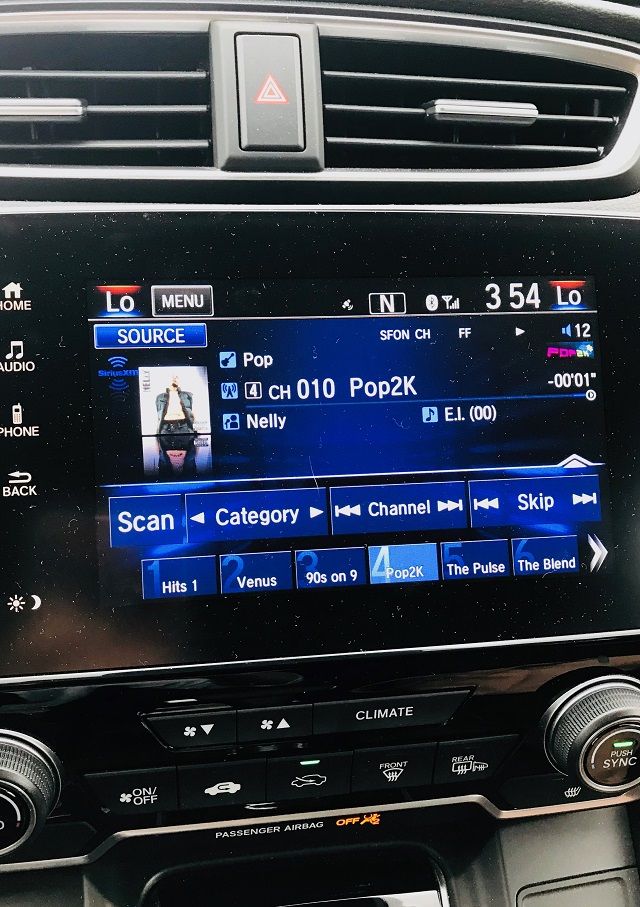 I heard E.I. in the car the other day and immediately had memories of driving around in Jay’s red eagle talon with his system bumpin’ so loud that we almost definitely gave ourselves eardrum damage. Oh my god, that thing was ridiculously loud. But nonetheless, awesome memories…which Jay also appreciated. 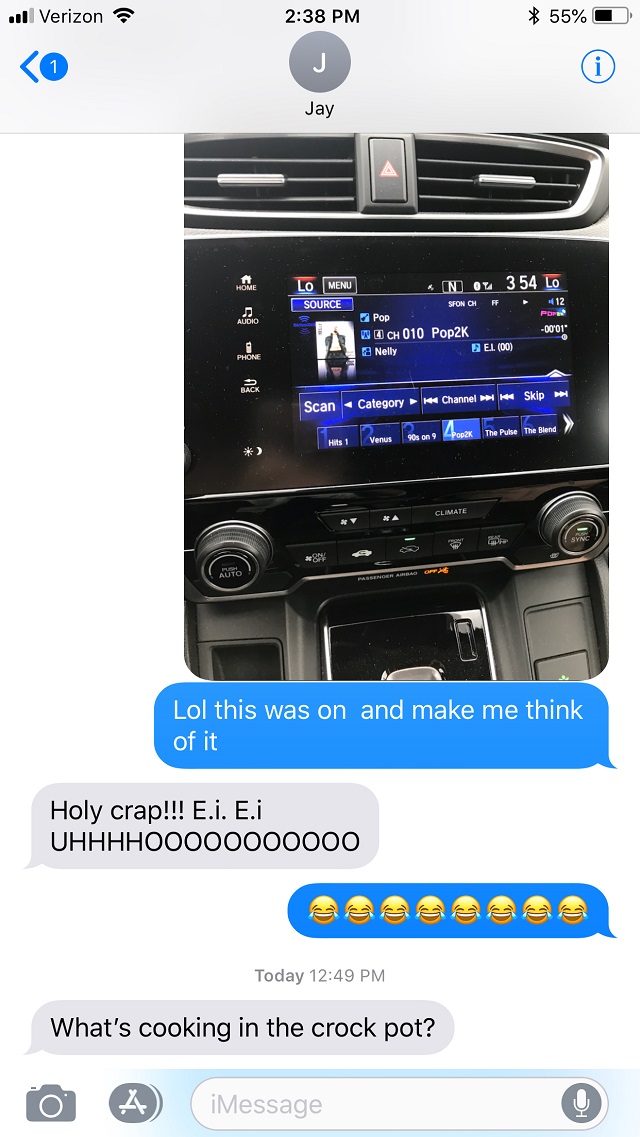 7. Please disregard my horrible misuse of ‘make’ instead of ‘made’ in the above conversation. It makes me cringe just looking at it.

8. Also, in case you’re curious, it was chicken and dumplings in the crockpot. ; )

9. Okay, I know I’ve been sharing a bunch about Monat these days, but I just have to give another huge shout out to their new Heavenly Hydrating Masque. Morrisa (who is just FABULOUS) was kind enough to send me a sample of it to try out, in exchange for my honest feedback. I initially shared my thoughts in her Facebook group a couple of weeks ago, but the stuff really was so awesome so I need to give you guys the heads up on it, too. 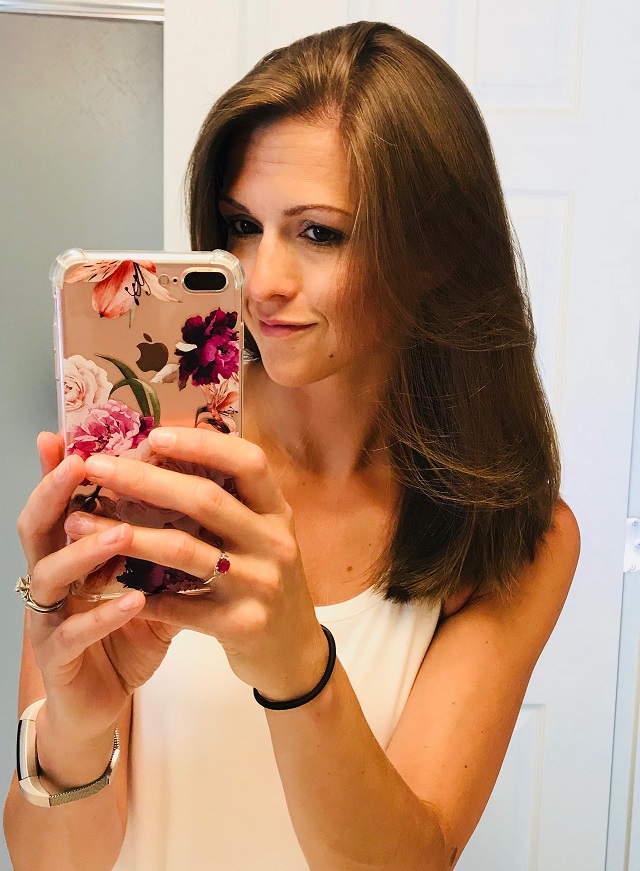 My initial thought about the masque? Totally OBSESSED with the smell. Ugh, it was SO GOOD. But scent aside, I was totally surprised to see such a difference in my hair after just the one use. My hair seemed immediately silkier, shinier, and just felt overall healthier. I didn’t even use hairspray on this particular day that I used it, which is rare. 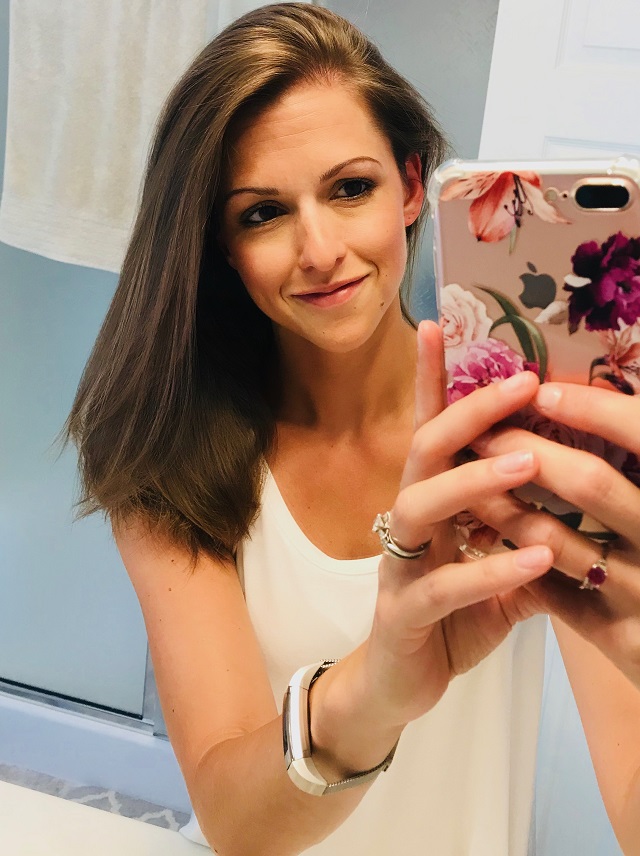 So, seriously, if you’re at all curious about the products, I would 100% recommend reaching out to Morrisa (Direct Message her on Facebook HERE or email morrisareynolds at gmail dot com). She’s incredible at what she does, and I’m honestly SO happy with the Monat line. It’s been great for me.

10. My goodness, total #cliche, but some days I look at these two and wonder HOW the heck they look so BIG? I just adore them. 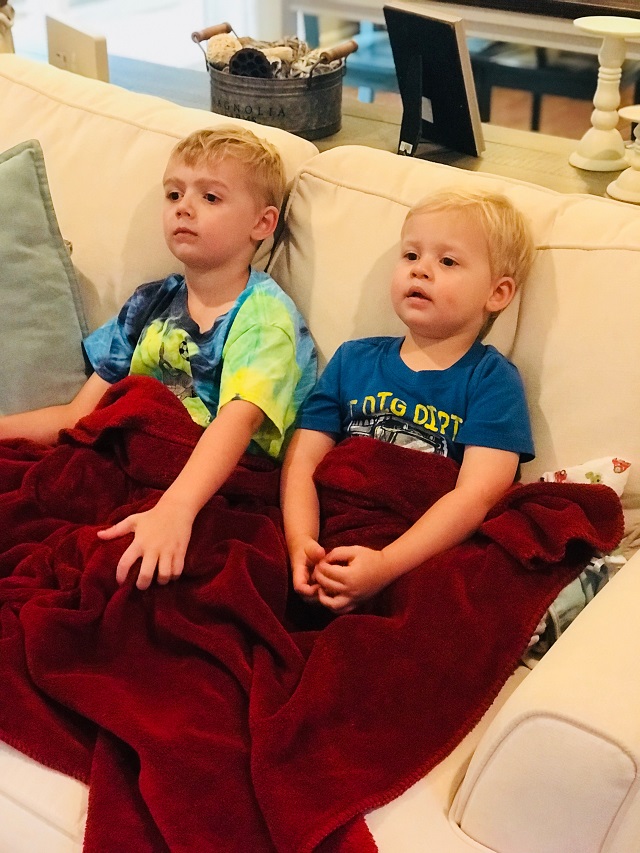 Even if they do make me question my sanity most days. ; )

Alright, that’s all for today, friends! Hope you have a fabulous Friday and a wonderful weekend ahead, whatever you may be doing <3