I don’t want to go jinxing myself, but I feel like we’ve actually been doing a little bit better over here on the meal planning front. For a while there, I felt like I was winging it basically every night of the week and, as expected, that lead to total chaos and meltdowns come dinner time.

Since it’s been forever since I’ve been sharing our day-to-day meals or weekly meal plans, I’ve sort of gotten out of the habit of photographing everything I eat, but it doesn’t mean I don’t take some pics here and there!

So today, I figured I’d share some meals that we’ve really enjoyed lately. And hey, while we’re at it…are weekly meal plans something you guys would still be at all interested in? I’m almost considering bringing them back, so maybe I just need the subtle little nudge from you guys to pull the trigger? ; ) Then again, we do make a lot of the same things on repeat, so you might get a little bored with me. Ahh well.

First up, this Sheet Pan Bruschetta Chicken. I just realized that I did already share this with you guys before, but since we’ve made it more than once, I figured it’s worth mentioning again. It’s super easy, only requires ONE PAN, and the boys eat it (minus the tomatoes) so it’s a winner. 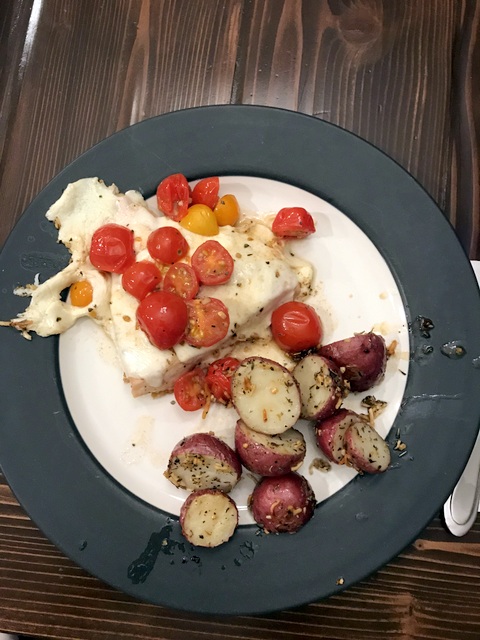 Just don’t judge its deliciousness by my photos.

Jay and I also enjoyed a super delicious meal (and date night!) last weekend over at The Century House. For those of you who may be a bit newer around here, this is actually where Jay and I got married (over 8 years ago!!) so we enjoy being able to go back now and then for dinner.

It was a last minute idea to get out, so we were pretty pumped to be able to have my parents come over and watch the boys for a bit. 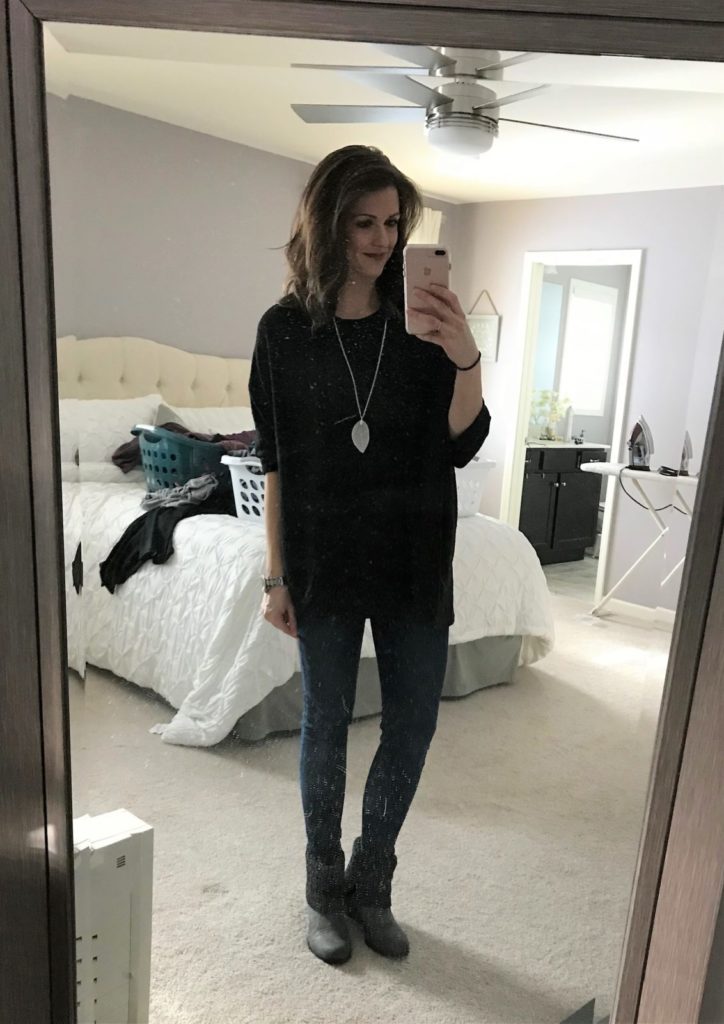 Holy crap, I think it’s time to clean off the mirror. Geez, that is embarrassing…

We were both in the mood for some steak, which is what prompted our trip there in the first place, and although I didn’t take a picture of it (whoops), I got my usual, favorite filet mignon. And, of course, we couldn’t not get the calamari, too. 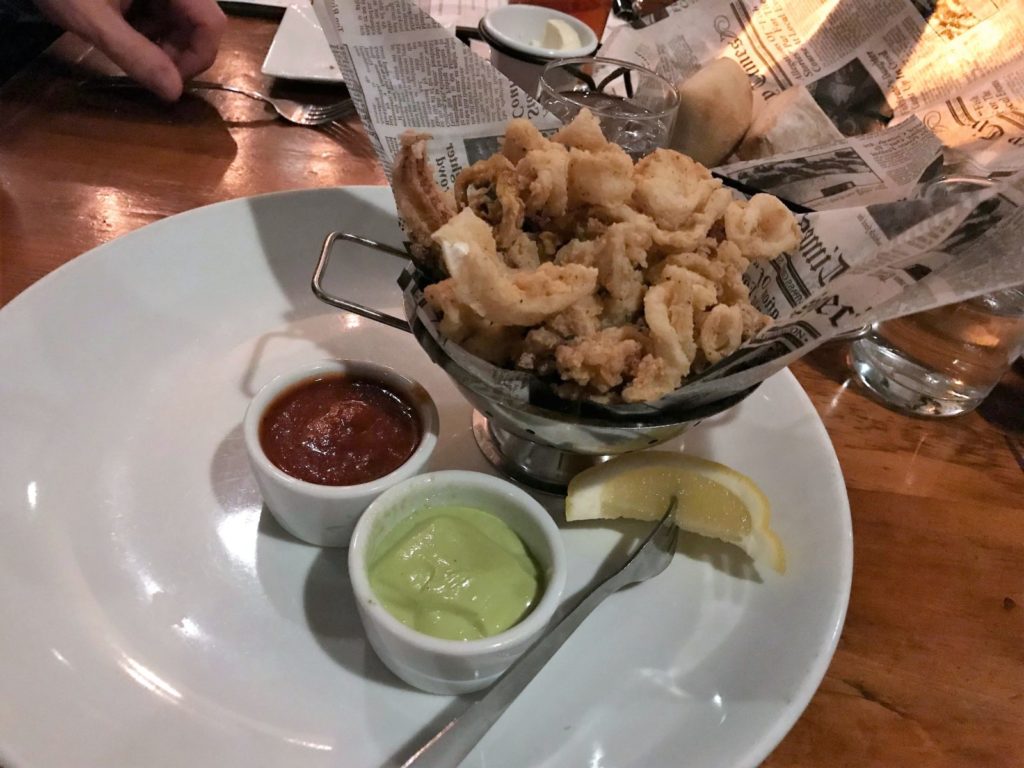 We also broke out the crockpot earlier this week for some Crockpot Stuffed Pepper Soup. It had actually been quite a while since we made a batch of this, and it definitely did NOT disappoint. This is a good one! 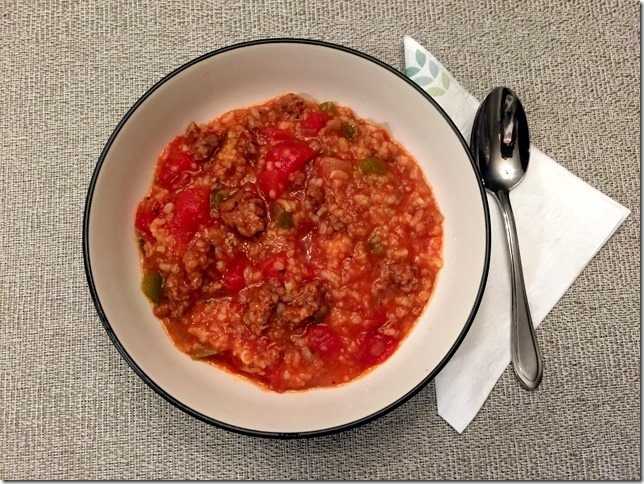 Speaking of crockpots, I’ve been trying to incorporate at least one meal a week in ours, since it always makes dinnertime that much easier. In case you’re in need of some ideas, be sure to check out this post below:

That post may be 3 years old, but all of those recipes are still my favorites. <3

I also recently enjoyed an awesome lunch date with a handsome little guy named Lucas. We just had a new Chili’s restaurant open up near us, and he’d been asking me almost every time we drove by when we could go for some “chips and guac.” So after preschool last week, we went! 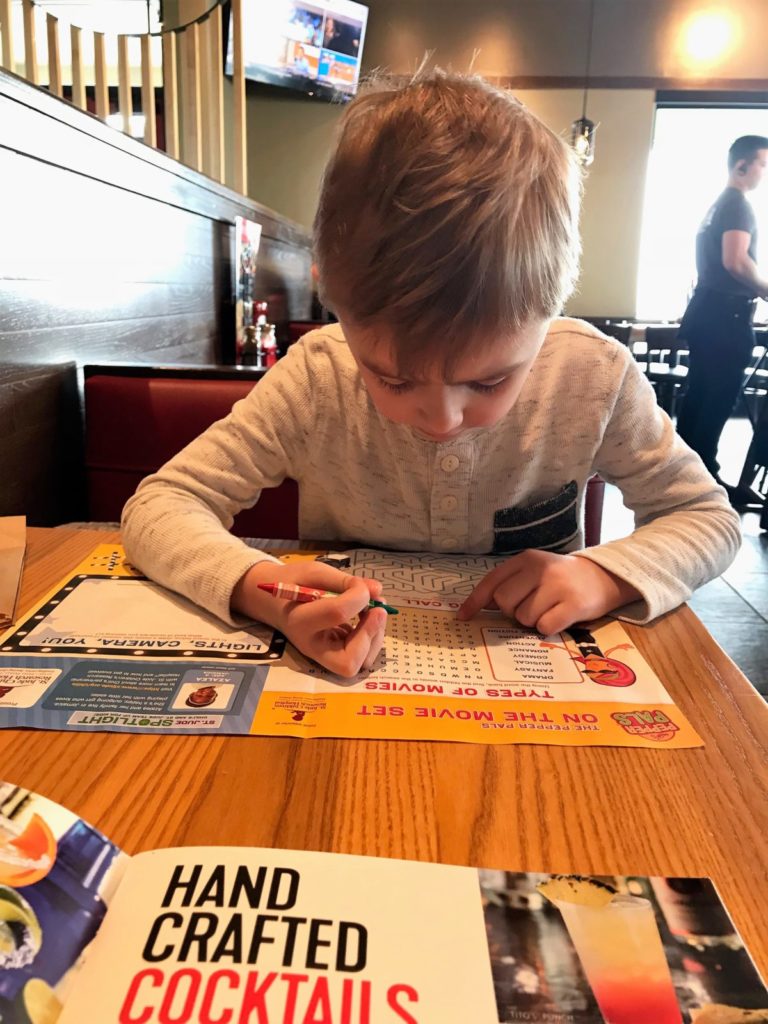 Of course, he decided he didn’t like the guac, but did tell me that mine was better, so I let it slide and just hoarded the rest of the guac for myself. But really, it wasn’t about the guac…it was the company that made the meal extra special. 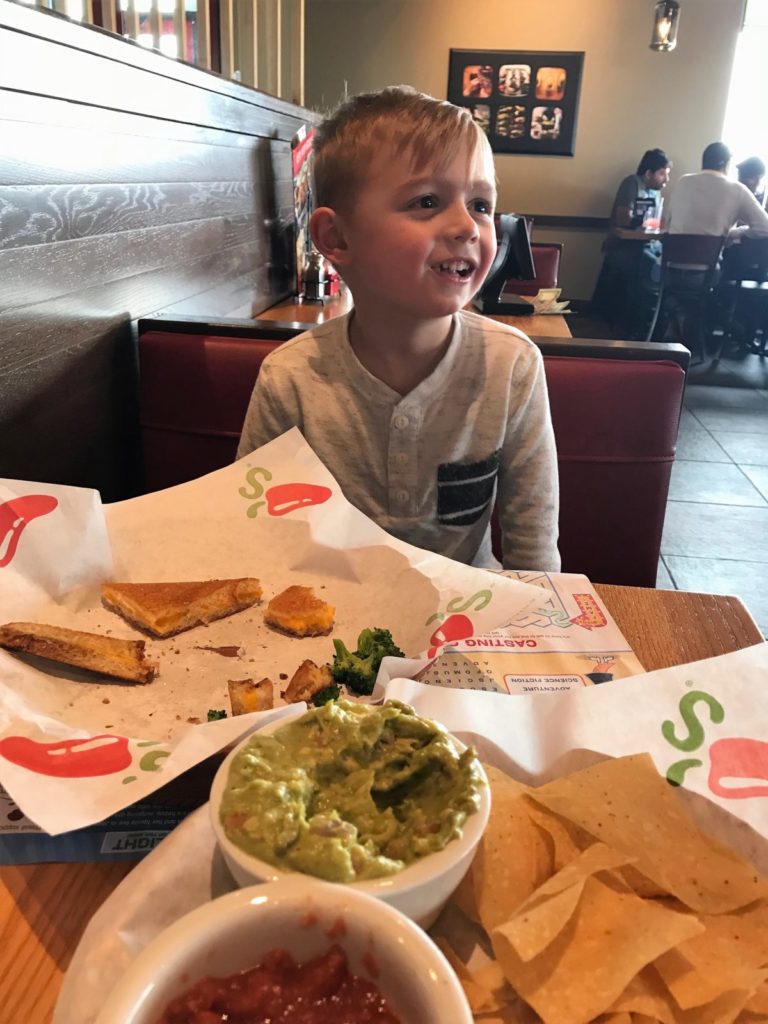 Another extra special meal that was loved by ALL was this Loaded Chicken and Potatoes. Unfortunately, I never managed to snap a pic of it, but ohhhhh, I would 100% recommend this one. *If you’re looking at the recipe, we substitute 2 tbsp of BBQ sauce for the hot sauce and we love it that way!

We also enjoyed a super tasty meal over at our neighbors’ house last weekend, complete with beef brisket, BBQ chicken, potatoes, corn bread, and more. The kiddos got to run around and play like usual, and the adults got to catch up a bit. Again, I didn’t take any pictures of the food (whoops), but the company was the best part, and our crew is even continuing to grow. 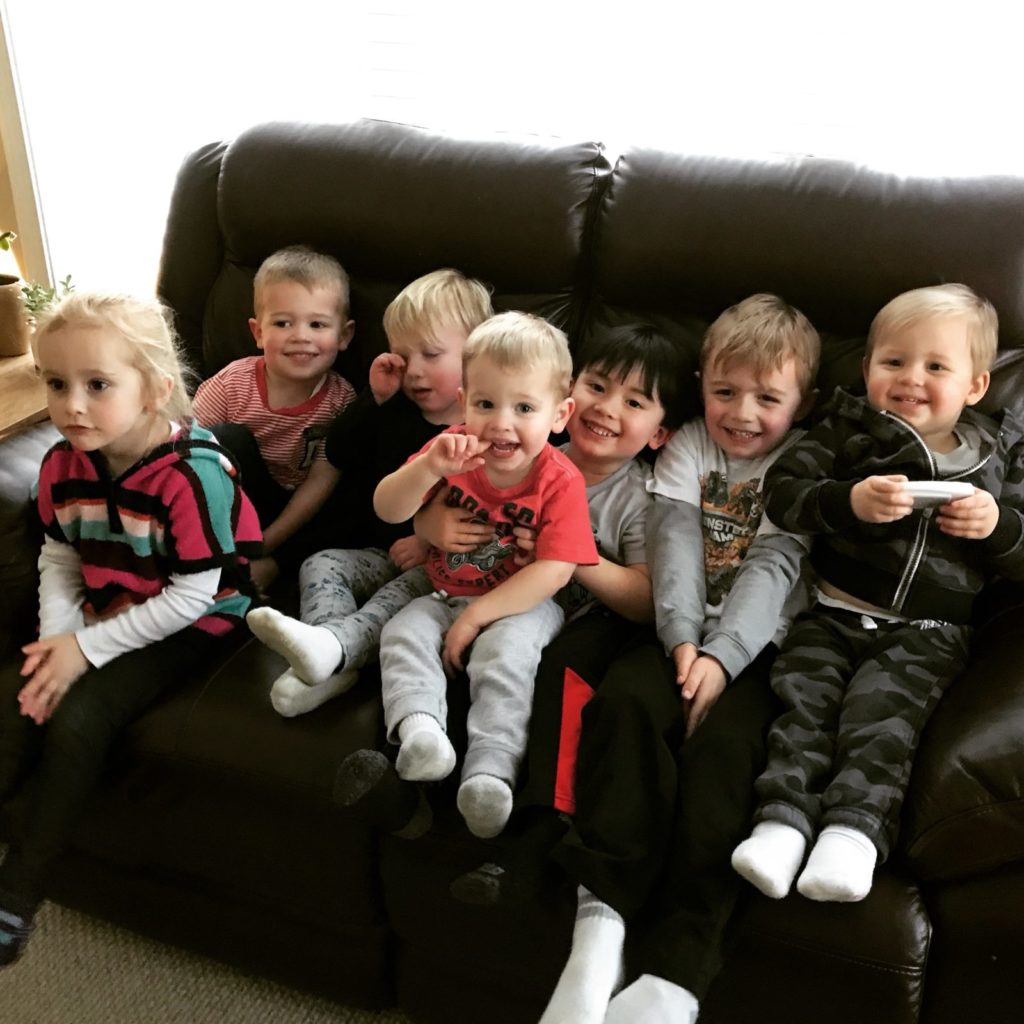 This is also what I made that Brownie Heath Trifle for, which you may or may not have caught on my Instagram stories. SO good, and one of my favorites! If you want to know how to make it, check out THIS POST – just use one large trifle bowl instead of individual, and substitute Heath bits for the candy! 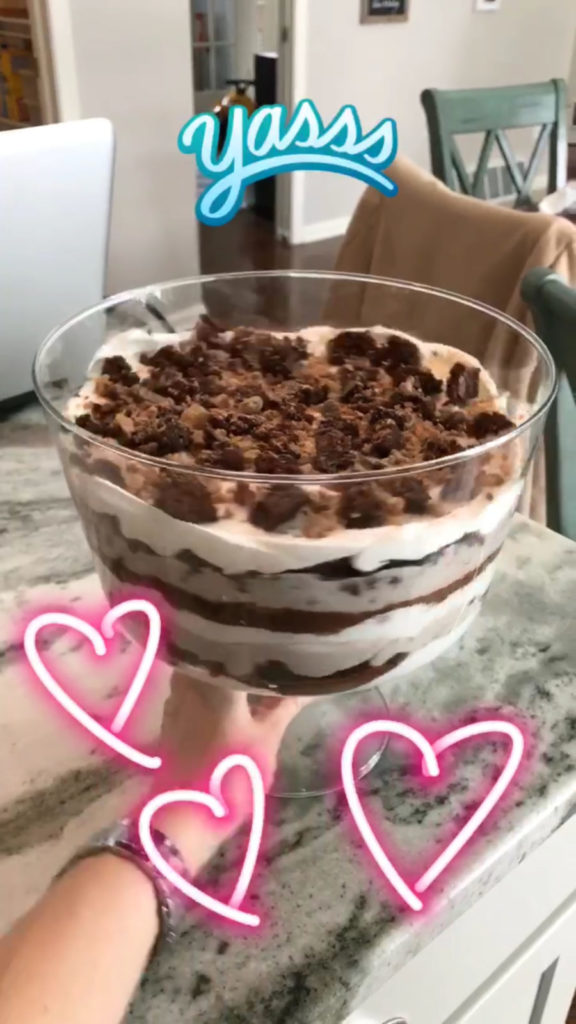 In addition to all of that, we’ve been doing lots of tacos, quesadillas, baked chicken, and pasta. Because…easy.

How about you guys? What have you been loving/keeping in the dinner rotation lately?