All sorts of fun stuff to catch up on, so let’s jump right to it!

First, did you guys all have a great weekend? We definitely did! Starting with Friday, where Lucas had a field trip with his preschool class to the bowling alley – he was SO excited about it all week. 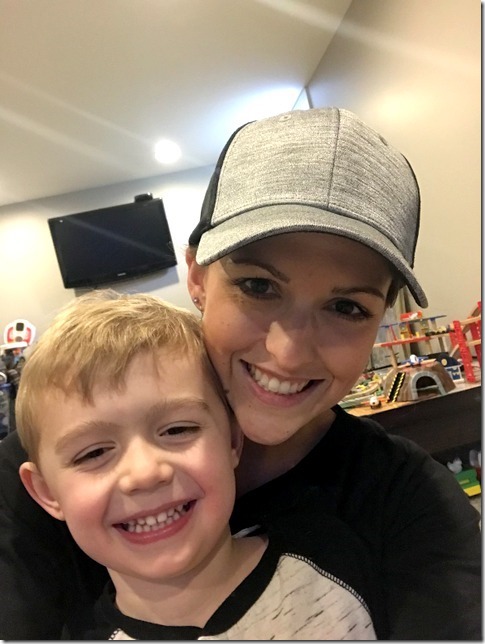 The kids got to bowl a game and also got to see the back of the bowling alley – the kid was in his glory!

On Friday night, Jay and I got to have a night out of the house with the kiddos to attend his company’s annual kick-off party. 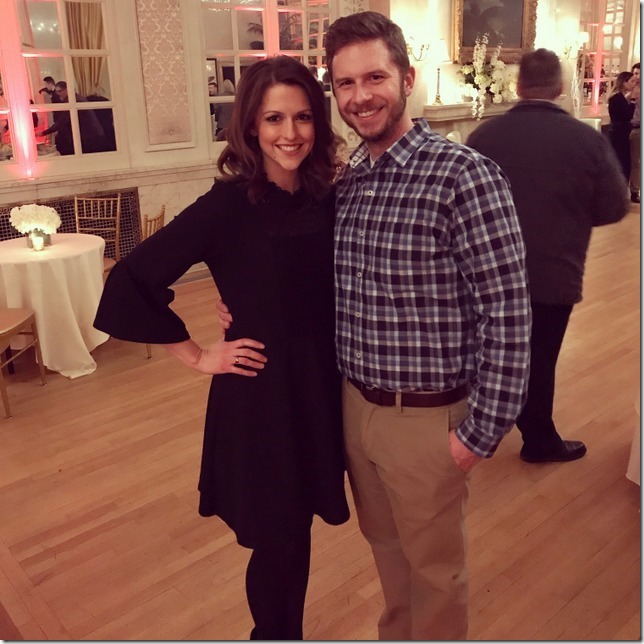 And since my brother also works at the same company as Jay, that meant we also got to see him and his girlfriend, Carissa, too! 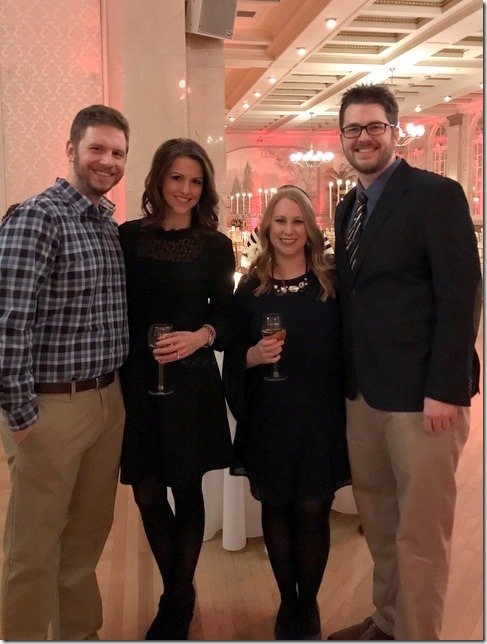 They always have really great food at the event, so after plenty of appetizers, we all sat down to a delicious dinner (filet mignon for me, always when it’s an option!). 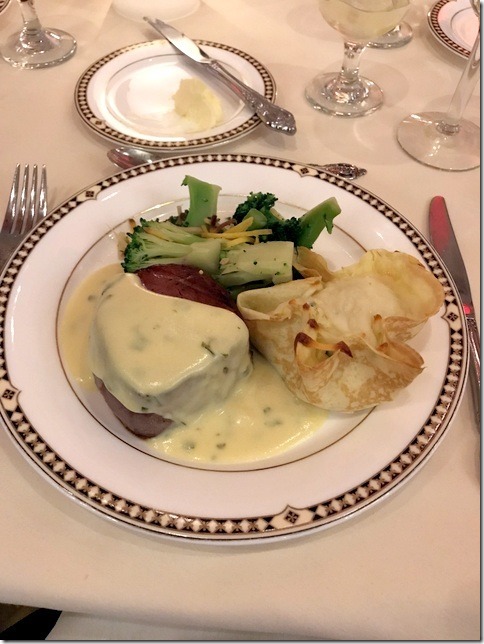 Then after dinner and company awards, it was casino night! They had a few different tables to play at, where you could win pretend money towards raffle tickets for prizes. Unfortunately, we didn’t win any prizes, but I did learn a little bit more about how to play craps (aka, the most confusing game EVER). 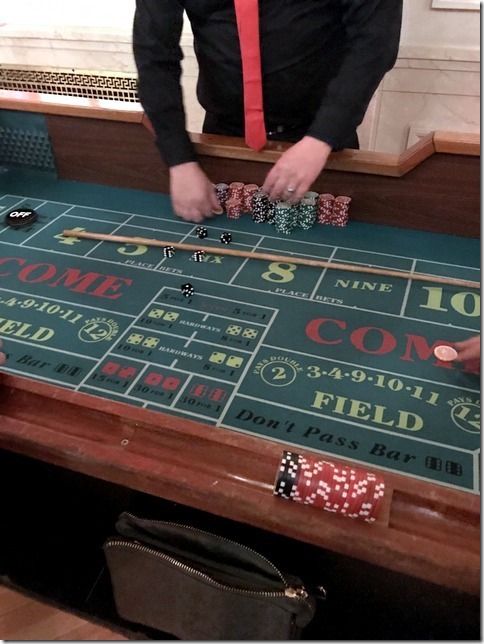 It was definitely a fun night out, and always good to see some of Jay’s co-workers and their wives!

On Saturday morning it was just us and Alex, since Lucas had a sleepover with my parents. And since Saturday was actually Lucas’s half birthday (which yes, it’s a thing), I got to work on making him half of a cake before he came home.

With a little extra help, of course. 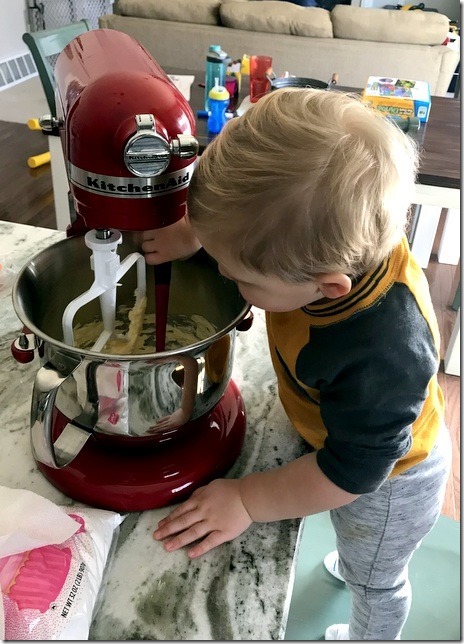 And before anyone goes getting all up in arms on me for sharing this picture, don’t you worry…the mixer was NOT plugged in here and I was right behind him. Little guy just can’t stay away from helping in the kitchen (as you saw yesterday).

I never ended up taking a picture of the end result, since Lucas arrived home a little earlier than expected so I was scrambling, BUT, the cake was a hit. 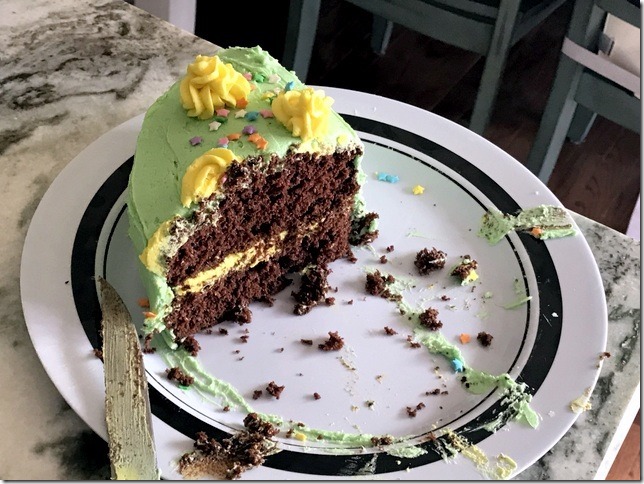 As were the balloons, scratch off tickets, and coloring books. 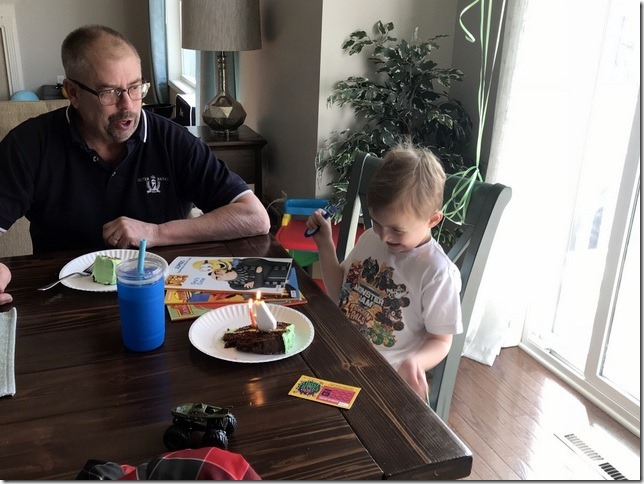 Such a happy guy, and he must have thanked us a dozen times <3 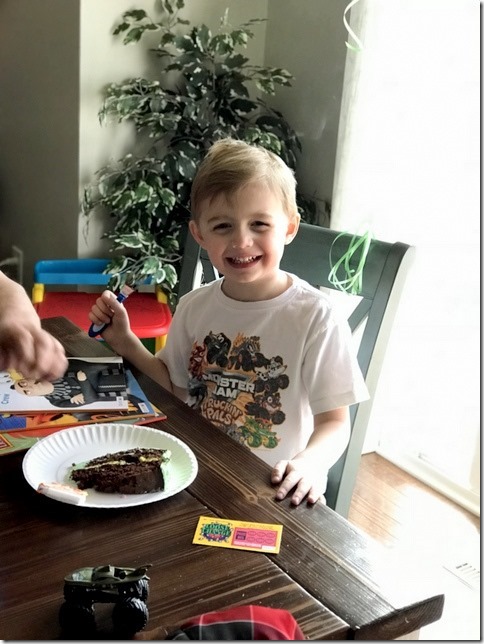 The rest of Saturday was fairly low key, although we did get to spend a little time outside which was SO nice for a change. And we enjoyed a casual dinner of tacos which, much to my surprise and excitement, EVERYONE ate. Together. Without fighting. Or whining. 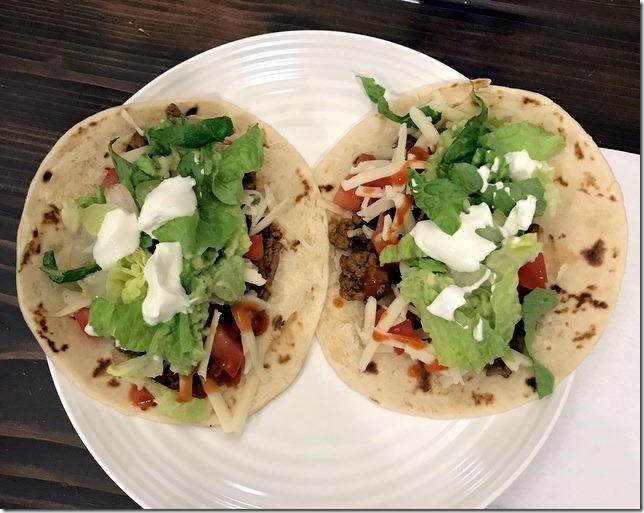 It was a parents’ dream meal!

On Sunday, we started off the day with some fun thanks to a trip to one of the nearby trampoline places with all of the neighborhood kiddos. 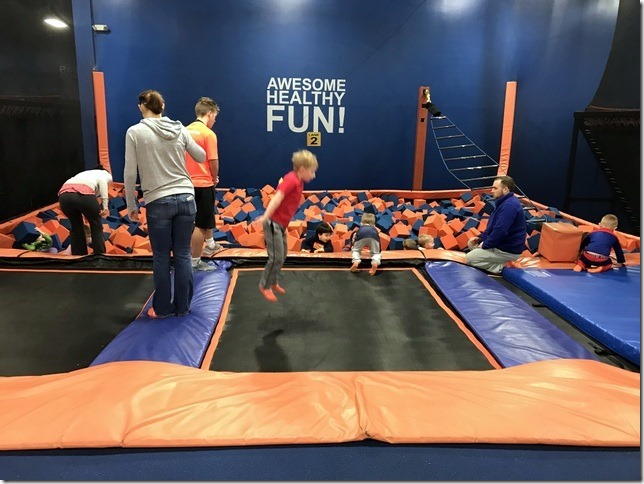 Unfortunately, this is how Alex felt about the trip for about the first 50 minutes out of our hour long jump time. 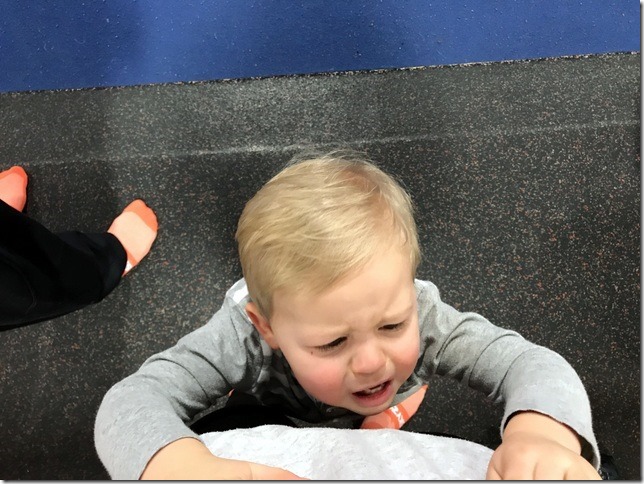 But of course, he wound up feeling comfortable enough to break away with about 10 minutes left to spare. Ahh well, kiddo, next time. 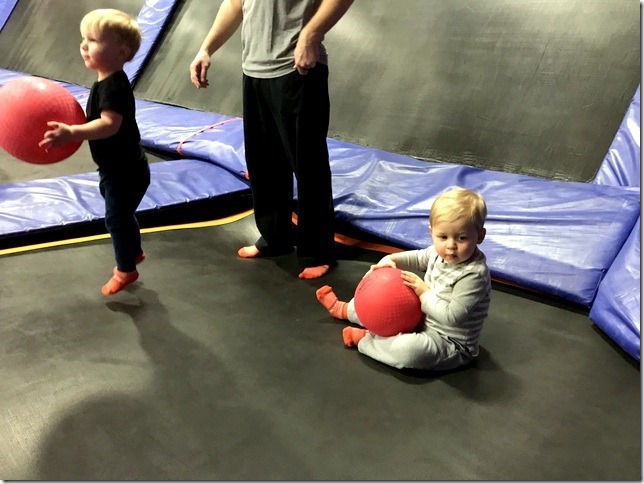 Lucas, on the other hand, was having a ball. Quite literally (mwahaha). 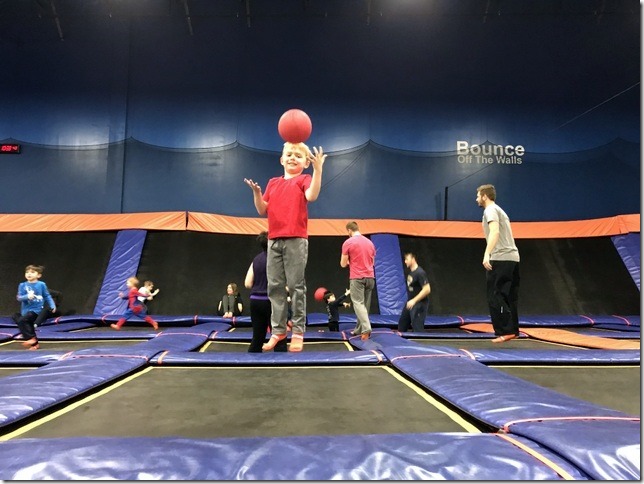 After jump, we came home for lunch and Alex’s nap, and shortly after that, we headed over to my parents’ house for a little early birthday celebration for me. 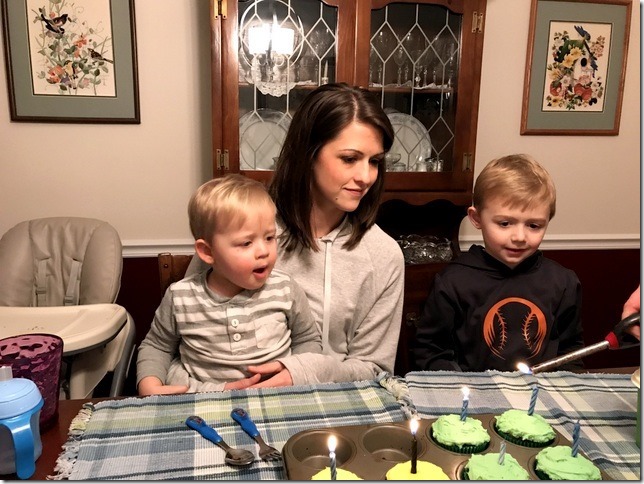 Speaking of which, yes, today is my birthday! So I officially cannot call Jay old for another 6 months now, since we’re both now 34. 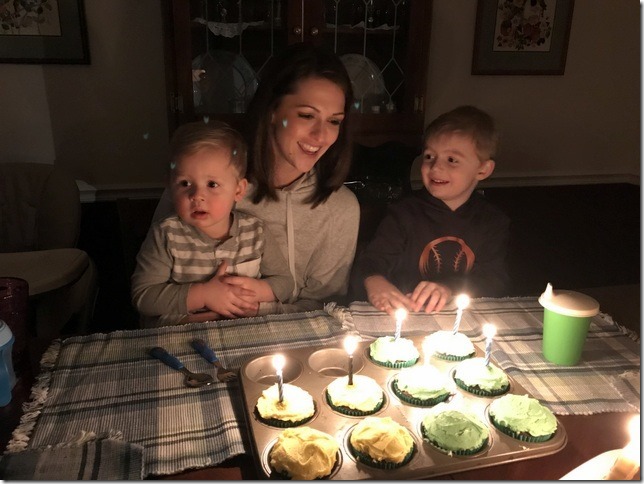 Once we got home, bathed the  boys and put them to bed, I had the energy to start tackling one of the first projects on my list in terms of simplifying life…our master closet. 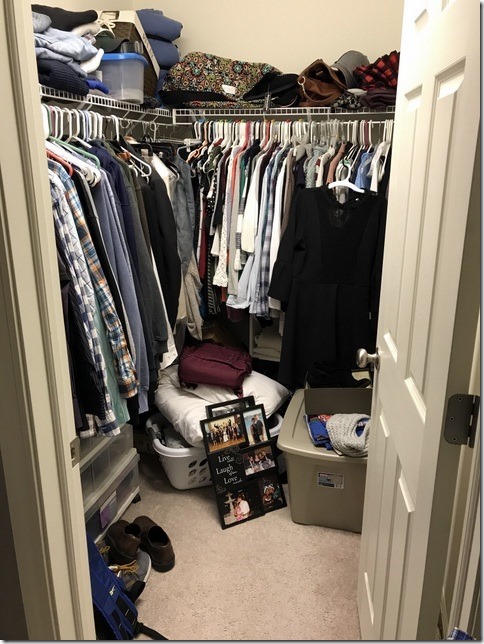 Our closet isn’t any sort of big, dreamy space. But we somehow manage to fit all sorts of random junk, crap, and other stuff we just do. not. need. So it’s still a work in progress (we started late), but after about an hour and a half, we had 4 garbage bags filled with clothes to donate and bags filled with trash (old picture frames, empty boxes, etc.). Talk about gratifying!! I’ll be sure to give you guys some more updates once we’re finished (or at least closer to it).

And that’s a wrap on our weekend! Here’s hoping for a great week ahead for all of us – make it a great one <3