Jay and I didn’t wind up getting home last night from our friends’ apartment until almost midnight, thanks to some late-night Olympic games viewing. It also probably didn’t help that the boys managed to find this Summer Olympics Drinking Game…

Needless to say, they made for quite an amusing evening.

Since I didn’t get to bed until almost 12:30 last night, I bailed on my planned morning walk and snoozed through my alarm until about 7am. Hopefully I’ll get a chance to get that in later, but if not, no biggie.

Instead, I got up, checked some emails, and went right for breakfast…and this time, I knew exactly what I wanted. 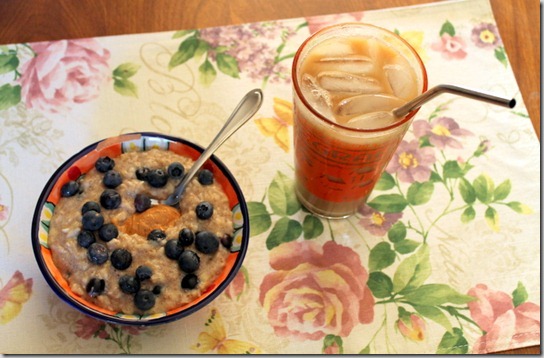 Besides having OIAJ a few times, it’s been months since I last had a bowl of hot oatmeal. I guess maybe the summer months will do that to ya…or maybe it’s just me going through yet another one of my breakfast phases. Who knows. 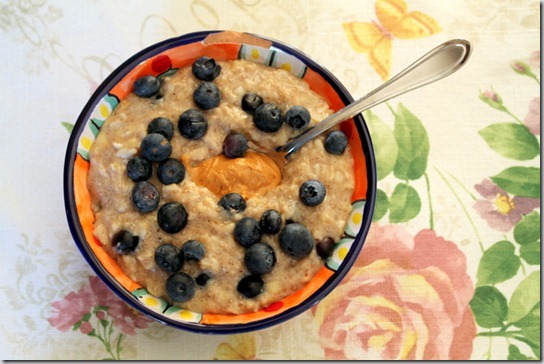 Apparently though, I seemed to have forgotten how to make a good batch of oatmeal because this one was just not that great. I like my oatmeal thicker lumpy (<—The Humpty Dance reference, anyone?!?) and this one was a bit on the watery side and lacking flavor. 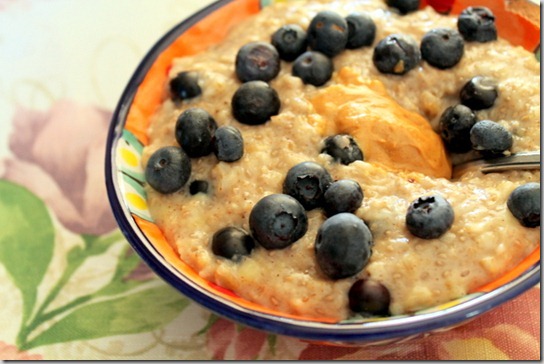 Luckily the blueberries and big ‘ol glob of peanut butter helped out a bit in that department, but ehh, I guess you can’t win ‘em all. Hopefully lunch and dinner will be better…I’m actually thinking that this salad sounds good for lunch (actually from exactly a year ago today!), and these chicken burgers are most likely getting made for dinner. YUM.

Has anyone else found their usual bedtime getting later and later thanks to the Summer Olympics?