Is anyone else totally blown away by the fact that we are already in the last full week of March? I happened to look at the calendar this morning and had to do a double-take. Seriously, didn’t March just start? Yikes!

Anyway, quick backtrack…let’s get you caught up on what you may have missed over the weekend:

(FYI: I only got through about half of the “stuff” I wanted to get through yesterday, and I didn’t get a chance to get that manicure done. Fingers crossed that I find a half hour for it today.)

So last night, Jay and I were invited over to my parents’ house for dinner, which included a lovely, spring-like spread. Chicken from the grill, pasta salad, and oven potato wedges. 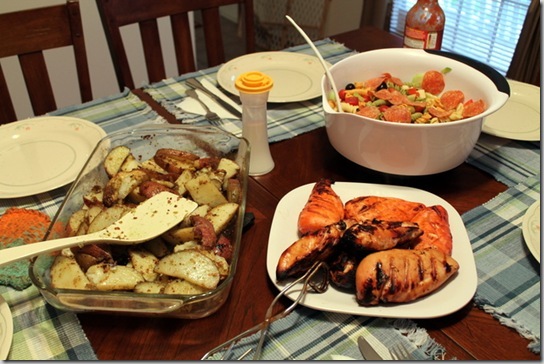 Oh yeah, and peas. I pretty much grew up on peas (and green beans and corn), so it’s never a surprise to see them when I return back home for dinner. It’s a welcomed dinner veggie, though. I still love me some peas. 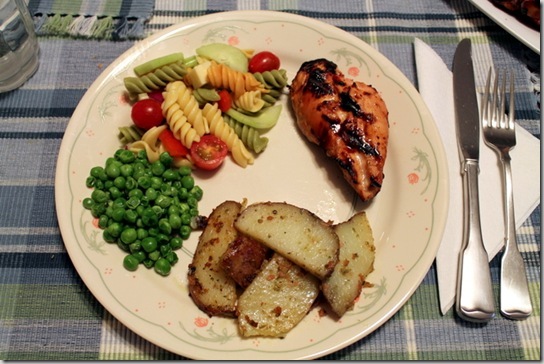 I enjoyed a little bit of everything, but I think my favorite had to be the potatoes. They were made with some sort of bacon seasoning packet which was actually pretty darn delicious. 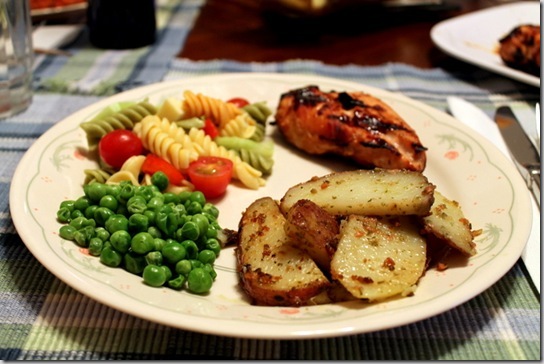 Shortly after dinner, there was dessert, and I wasn’t about to turn down dessert from mom (I think that’s a written rule somewhere anyway, right? Dessert at your parents’ house is obligatory?). 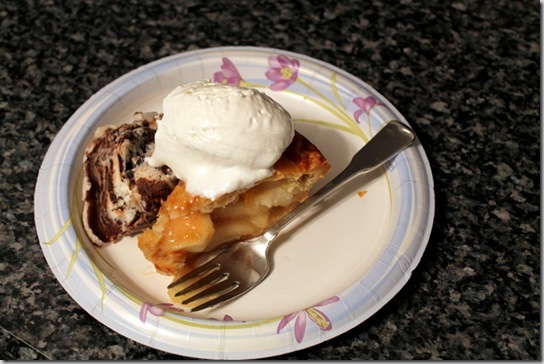 BUT, I did keep portions in check, with a small sliver of apple pie + a small scoop of ice cream and whipped topping. Quite a tasty way to finish off my Sunday!

This morning started with a short shift at the gym, combined with my own bootcamp workout for the day which included a lower body workout and some circuit cardio intervals. Today’s lower body workout was actually the same one that I did last Monday, only today’s plan called for four sets instead of three.

Now, let me tell ya. I’m usually a three-set kinda gal with most of my workouts. But adding in that fourth set brought the workout to a whoooooole other level. And I thought it was challenging last week…WHEW!

Today called for oatmeal. Today also called for peanut butter. So that left me with no choice but to whip up a batch of Peanut Butter & Banana French Toast Oatmeal. 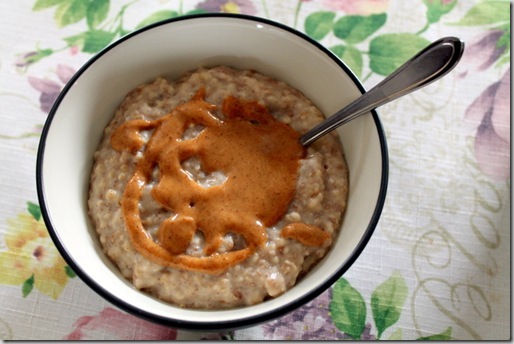 That photo right there is a recycled one because, to be honest with ya, I was super messy with today’s bowl which made me too lazy to go and grab the camera. Woops. There was also some coffee involved there, but that should be no surprise to you.

I never got a chance to get my grocery shopping done yesterday, so that’s my plan for later this morning, along with a plan to tackle my email in box. I swear, just when I think I start to make a good dent in it, it fills right back up on me!

Hope everyone’s Monday is off to a great start so far!

How many sets do you usually perform with your workouts?

What’s one thing you could never pass up from your mom/dad when it’s offered?