Alright, let’s start back where we left off with the IDEA World Fitness Convention! I crashed hard Thursday night, that’s for sure. On Friday morning, I got up fairly early, showered, and ordered room service because, well, why not? 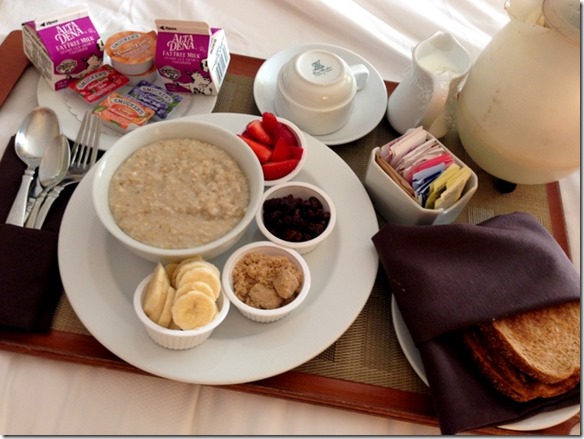 Shortly after breakfast, I met back up with some of the gals so we could catch a few of the morning sessions at BlogFest once again. 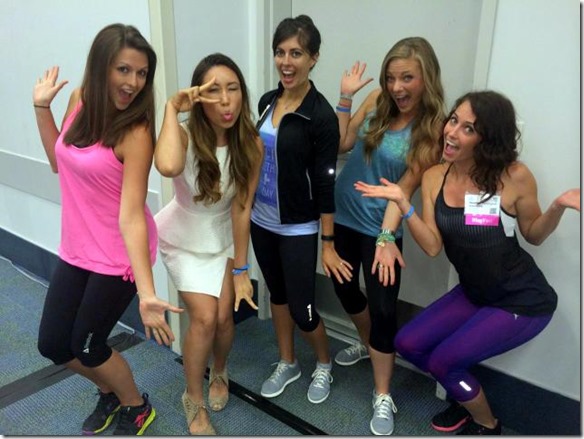 The first session was done by the ever popular and super sweet Cassey Ho from Blogilates. She had some great info for bloggers who are interested in monetizing their blog, as she has clearly excelled at. 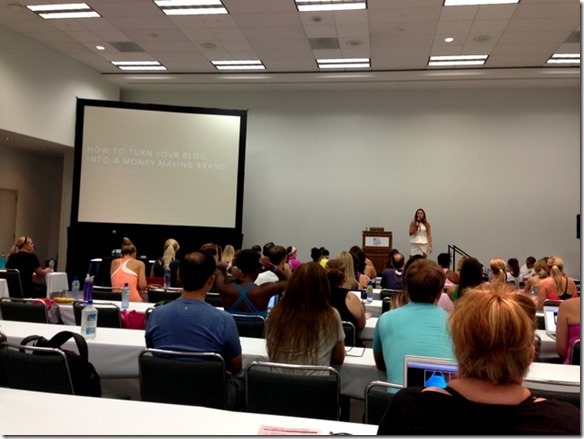 She went into some detail on the following points, but my note taking was pretty lame thanks to me forgetting the ever important paper and pen…

After Cassey’s presentation was the keynote address, which was given by the one and only Jillian Michaels. 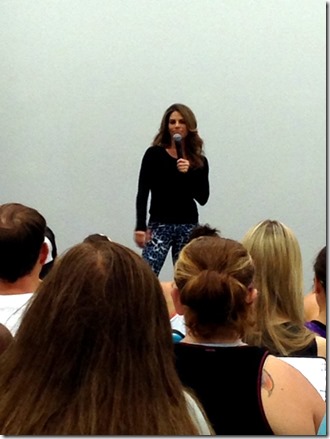 Honestly, before Jillian’s speech I was a fan of hers, but I wasn’t like one of those “errrrmygawddd I love her!” fans. Know what I mean? I’ve always enjoyed her workouts, I actually get pretty motivated by her “amped up” teaching/coaching style, and I never had a problem with her promoting whatever it was she wanted to promote (she actually touched on this a bit in her speech and it was quite interesting!).

Well let me tell you…after Jillian’s speech? I think I’m now one of the “errrrmygawddd I love her!” fans. She was so incredibly humble, down to earth, and just so willing to tell it like it is. In fact, I think the fact that the whole room thought an earthquake was happening as she started speaking helped break the ice a bit (*fun fact: it was not an earthquake, but there WAS an earthquake on Thursday while we were in a session. And it freaked. me. out.) 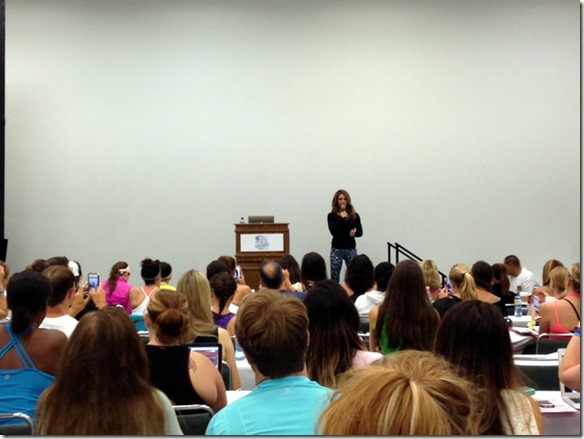 But as for Jillian…she wasn’t a hard-ass like she’s typically portrayed on tv and she genuinely seemed to not only appreciate everyone that was there, but her passion for health and fitness was just captivating. Some of my favorite quotes of hers I was able to jot down in my phone as she was speaking (these are not word for word…)

During the Q&A section of Jillian’s speech, someone also asked her about how her philosophy on fitness has changed since entering into motherhood. On this, I could not have related to any better. She explained how she’s had to get smart and efficient about her workouts; where she used to be able to spend 90 minutes in a yoga class 15 minutes away, she now needs to squeeze her weekly workouts into about (3-4) 30-minute sessions (story of my liiiiiife). She makes those 30 minutes count though, and I truly agree with her that quality ALWAYS trumps quantity. Get in, get ‘er done!

So my Add Flavor Challenge for the month of August with Propel was to spend some time shadowing a fitness professional. 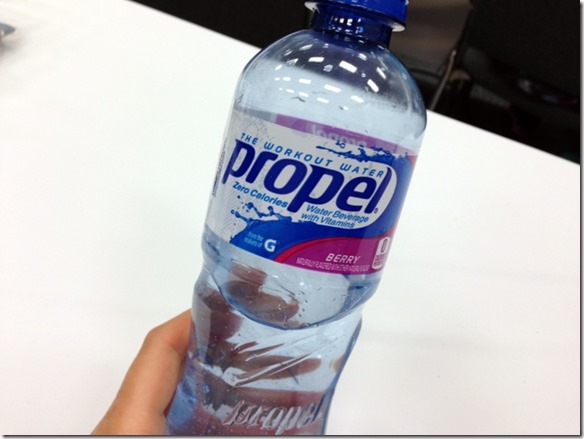 A little bit later on Friday, I met up with one of the awesome girls from Propel and she brought me to get introduced to my fitness pro – Amy Dixon! As soon as I heard I was shadowing Amy, I knew the name sounded familiar and I immediately remembered that I’d most definitely done some of her videos on FitnessGlo in the past. So cool! 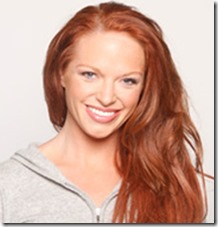 Amy is a contributing editor for numerous fitness and lifestyle magazines, the Group Fitness Manager for Equinox Fitness Clubs in Santa Monica, a member of the Gatorade G-Series Fit team, as well as a Master Trainer for Schwinn Cycling and BOSU. Amy also stars in many critically acclaimed fitness DVD’s and online fitness programs. She has over 15 years of teaching experience, and her talents have been featured on The Today Show, ABC News, E Entertainment Television, Good Day LA, Custom Fit, Exercise TV, Your LA, Fox News, and MTV. Her classes and insights have also been reported in Women’s Health Magazine, Shape Magazine, Self Magazine, Health Magazine, Fitness Magazine, Better Homes and Gardens, Variety Magazine, In Touch Weekly, The New York Times, The Washington Post, and The Los Angeles Times.

So my shadowing started by attending one of Amy’s presentations/workouts called “Leave Em Breathless 2.” The almost 2-hour session started off with a presentation from Amy on HIIT and how effective of a workout it is (I agree – it’s one of my favorite ways to workout!). After the presentation, it was time to get our spin on… 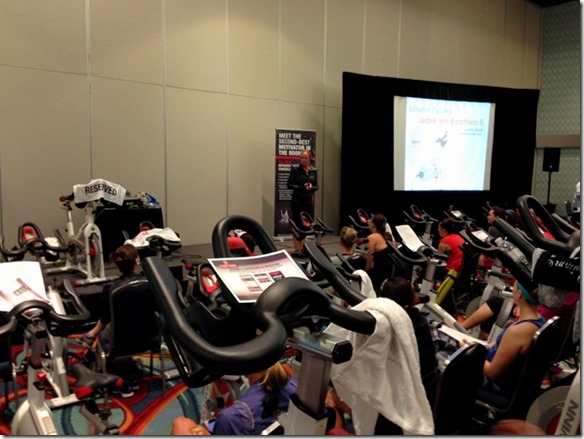 Yikes. Okay guys, you may or may not know this, but I’m not really the spinning type. I’ve tried it a few times in the past, and whether it was the music, the instructors, the workout itself, or just all of the above, it never really stuck for me. But I went into it with an open mind and was excited to try something new (and also of Amy’s caliber!).

Well, the workout was awesome. I worked up quite the sweat, and had a blast going through all of the different segments of the 50-minute workout. Amy was a phenomenal instructor, and kept us (well, at least me!) incredibly motivated the entire time.

Once the class was over, I had the chance to meet up with Amy, grab a couple coffees, and just talk shop. While it could have been a bit more of an interview, it ended up being much more of a double-sided discussion which I loved, and felt way more comfortable with. We each asked the other questions about our lives, what we do, what we love and hate, and why we love fitness. I’m going to be in touch with Amy a bit more soon, and be on the lookout, because I’m pretty pumped about what may be on the horizon from her! 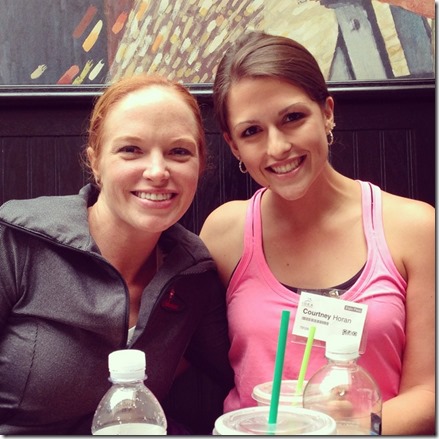 A little while after my shadowing was over, I met back up with Julie, Gina, Heather, Monica, Katy, and Bobbi. We had originally planned on going out for dinner somewhere, but wound up deciding to just stay in the hotel and order a crap ton of room service. 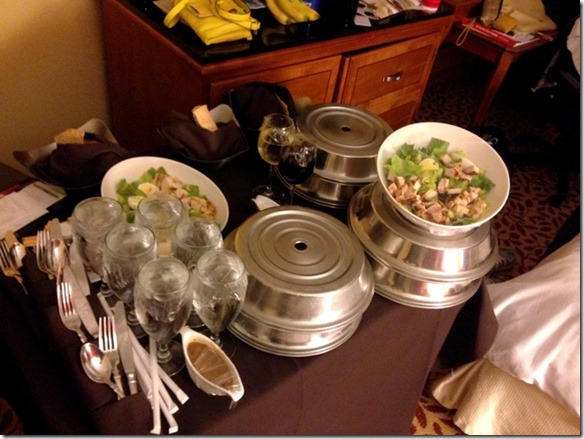 The seven of us just sat and chatted for a good 5-6 hours probably, just talking about anything and everything. It was seriously so, so good to catch up with some familiar faces and meet some new ones! If only we weren’t all scattered across the US…

Since Saturday was a travel day for me, it really didn’t leave me with much time for anything else, so I semi-slept in, did a little T25 workout in the hotel room (I know…doing a workout in a hotel room while I’m at a fitness conference, go figure, right?!), ordered some more room service, said my goodbyes, and was on my way back home!

Aaaand, that’s pretty much a wrap of my super speedy weekend away! I had such a great time, and I’m honestly so, so lucky to have such wonderful opportunities like these. I feel very fortunate, and I can’t thank all of you enough for supporting this little blog of mine. In fact, I  left feeling all sorts of different feelings…something I’ll probably have to think a bit deeper on and organize my thoughts a bit more before I go spewing them all out at you.

Okay guys, I’m outta here! Make it a great one!

Disclaimer: This post is part of my partnership with Propel. All opinions, as always, are my own.