I could really use some more sleep this morning.

How many days have I been telling you all that I need to go to bed earlier and get more sleep? And yet, here I am, still complaining about not getting enough. My goodness…would somebody please just slap some sense into me already? Hehe.

I’m doing a pretty good job of earning my “Awesome Wife” award this week – red meat twice in one week? Jay was in his glory! 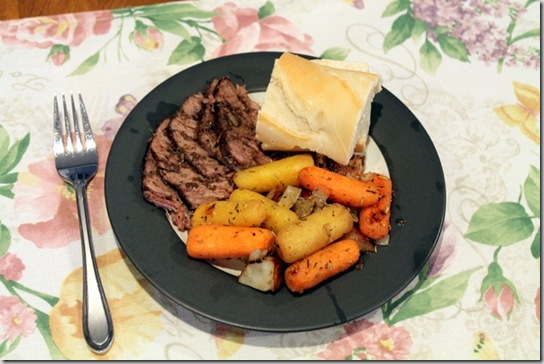 I wound up buying a chuck roast at the beginning of the week because it was on sale and I wanted to try something new. Lucky for him, he didn’t even have to cook it this time, thanks to it being a crockpot recipe that I found in my Betty Crocker cookbook.

The recipe was for French Dip Sandwiches, which I knew he’d love, so I told him to pick up some French baguettes on his way home from work. Here’s a peek at his decadent sammy… 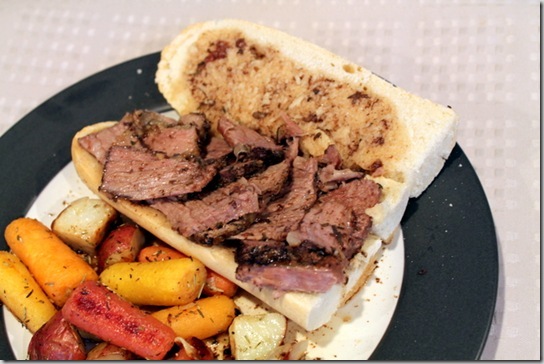 I opted not to make mine into a sandwich and instead, just had a small portion of the meat with a piece of baguette on the side. The meat was super tender, thanks to it cooking all day long, and had a pretty good flavor to it too. Not my favorite of all time, but it was doable.

I had also prepped some red potatoes and baby carrots this afternoon, which Jay popped into the oven to start roasting. By the time I got home from work, everything was finished and ready to go. 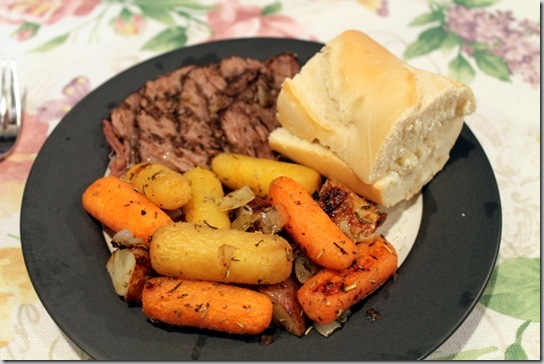 Now that’s what I’m talkin’ about!

Speaking of work (which I’m headed to in about 20 minutes), last night was awesome. I had NINE people in my Tabata class, which included some repeaters (Hey, Emily!) and friends of theirs that they brought along. It was a great class.

After that, I was training with a guy that I usually see every Friday. He’s super nice and is always up for any challenges that I might throw his way. At one point, as he was taking a break in between sets, he turned to me, laughed, and said, “Does your husband know you’re a masochist?”

I busted out in the loudest laugh right in the middle of the floor. He totally threw me off guard, but I found that comment to be hilarious. I might have been worried, thinking maybe I had worked him too hard, but he signed up again for next week so I’ll take that as a compliment.

I think I’m going through a slight cereal phase again… 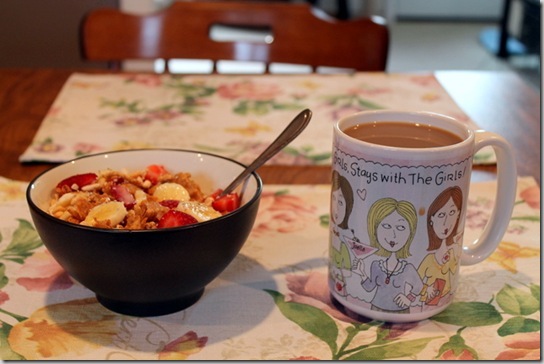 Either that, or I just like how quick and easy it is to throw together?

This morning’s combo included the usual as of late – Kashi Go Lean and Special K Protein Plus, with strawberries, half of a banana, chia seeds, and unsweetened almond milk. 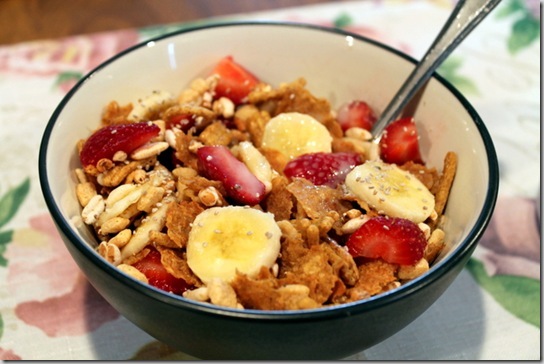 Now it’s just about time to head off to work for a couple hours (meeting up with another blog reader- so exciting!) then back home to get ready for a fun day with friends.

*Side Note: Still haven’t gotten any word from the Technogel winner. If I don’t hear anything by this afternoon, be on the lookout for a new winner!*

What’s the last nice compliment you received? How about one that you gave to someone?

« Kind of Ironic
Another Chance! »