Well, it may have been a bit more subdued and thrown together, literally, within a couple of hours, but yesterday we celebrated our 4th Annual Fall Festival.

If you were to check out our previous fall festivals…

…then you’d see that this year is hardly even close to the others. Unfortunately, there were a few last minute cancellations, combined with other friends having plans, so calling this Fall Festival may be a bit of a stretch. In actuality, it was more just like our Mexico crew hanging out for the day with lots of good food.

As you can see, we definitely had lots! And for having thrown this together within about 4 hours, I’d say we did pretty well, wouldn’t you? 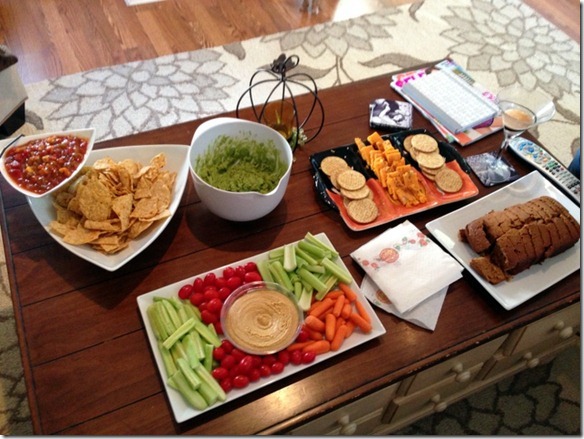 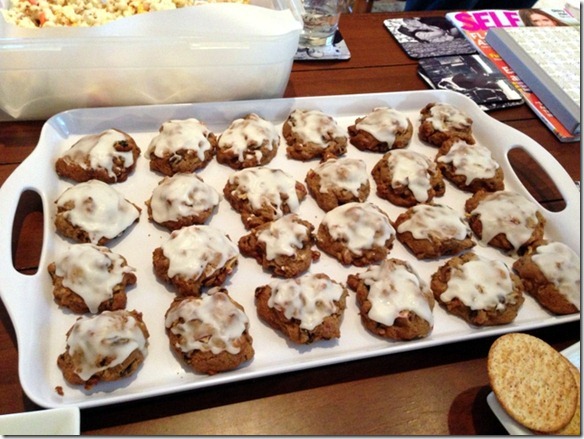 I also wound up coming across a recipe on Pinterest for Candy Corn Popcorn Balls. I already had all of the ingredients on hand, so I quickly threw these together before heading over for the festivities. 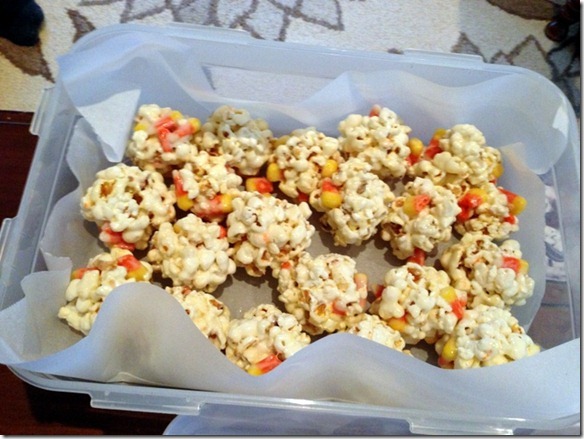 They really were super easy to make – pretty much like a rice crispy treat, but with popcorn and candy corn. I think everyone liked ‘em! 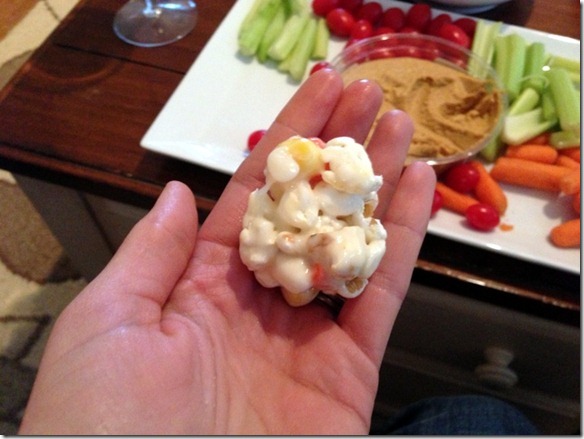 Of course, there was also plenty of seasonal beverages… 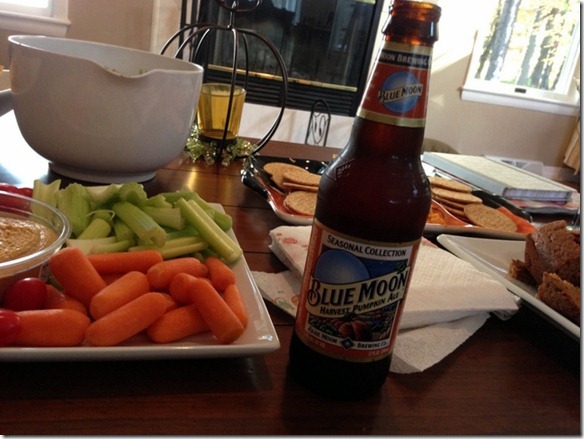 I enjoyed a pumpkin beer towards the beginning of the afternoon but then just decided to stick to water. Oddly enough, I wasn’t really feelin’ it yesterday…crazy, right?

The boys, on the other hand, were having fun experimenting with all sorts of fun girly drinks martinis. All of a sudden, my husband became a skilled martini maker…who knew? 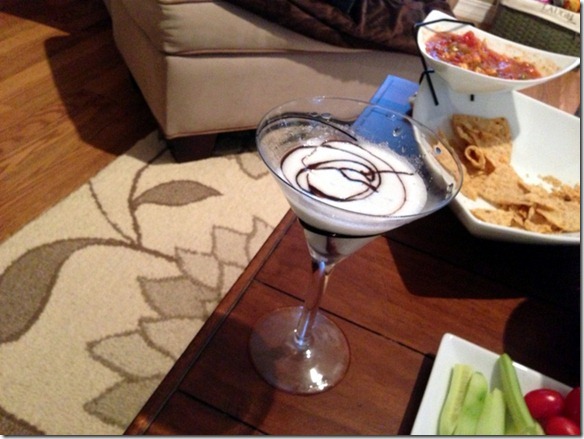 The funny part was that the boys were the ones enjoying them all afternoon, while the girls were drinking beer. 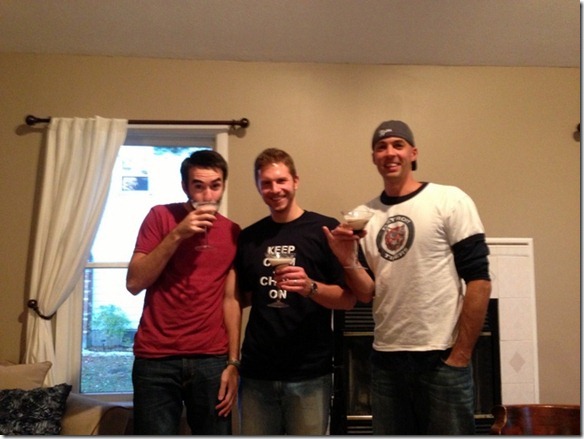 Just look at those characters and their girly drinks.

Of course, even if it was impromptu, if it was even slightly dubbed Fall Festival, then that meant there was one mandatory component… 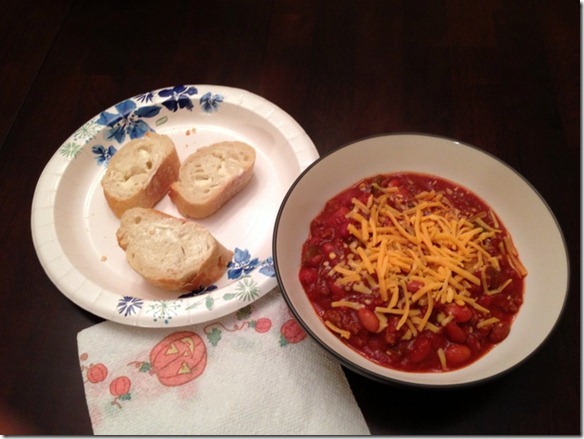 Mal’s Chili. It would never be the same without it…soooo, sooo good.

We all spent most of the afternoon just hanging out and snacking, and a little later in the evening we broke out the games. 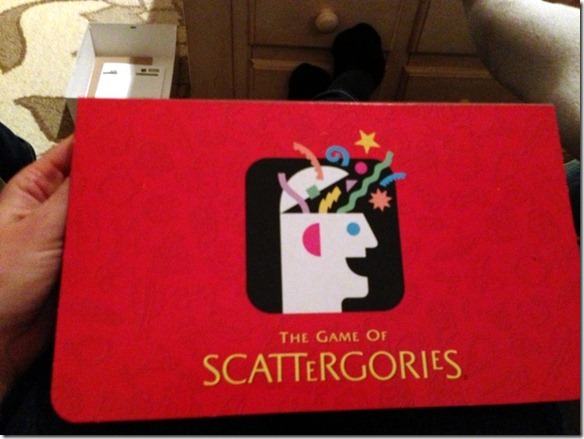 A few rounds of Scattergories and Taboo are always surefire ways to get in some good laughs. We were all talking about how we really need to bring back game night. We used to have game nights so much more often, but we got out of the habit.

This winter, we’re bringin’ it back! (hopefully)

This morning, Jay and I slept in for a bit before getting up for some breakfast. I asked him if he’d “pretty please” make me one of his amazing omelets (<—old school post alert! Complete with a shot of the old kitchen), and after my incessant begging and pleading, he finally caved. Mission accomplished. 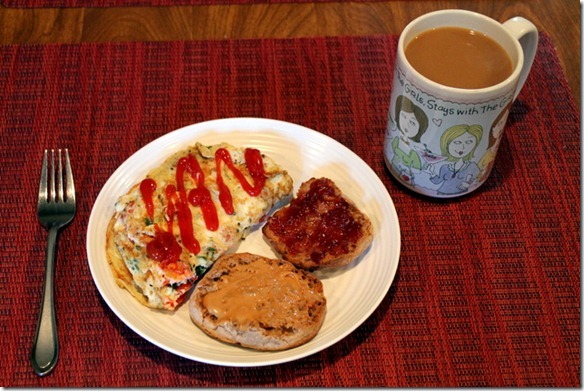 I ordered a one egg + 2 egg white omelet, filled with red peppers, onions, tomatoes, spinach, and feta cheese. He jazzed it up with all sorts of yummy spices and whatnot, but I have no idea what they were…all I know is that they were scrumptious. 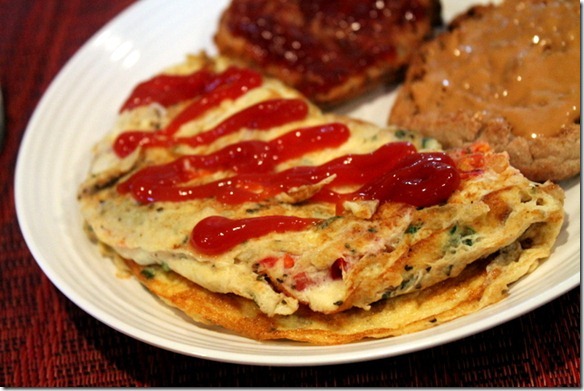 On the side, I toasted us up some whole wheat English muffins – mine with half peanut butter, half raspberry jelly. 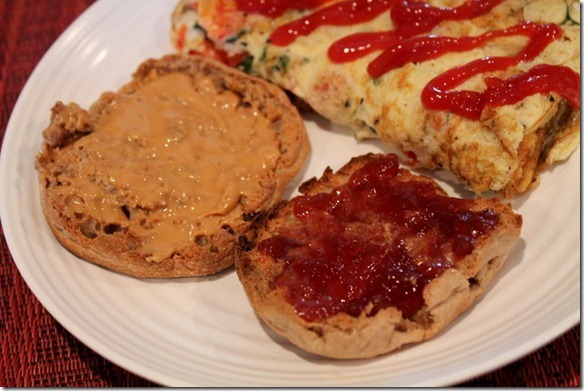 And then I also proceeded to leave the toaster oven on all during breakfast, so now our house smells like burnt toaster oven scraps and Jay is convinced that I was trying to burn the house down. Woops.

How’s everyone else’s weekend going? Today Jay and I have to finish up some stuff house work (aka, raking leaves…shoot me now) and then we’re off to my parents’ house to watch the Jets game. Hey, at least I have something fun to look forward to after dealing with the leaves.