Happy Thanksgiving week! Is that even a thing? Well, regardless, I’m still rollin’ with it because I am excited for all. the. food. Soon enough!

But before we get to that, let’s chat a little bit about this weekend. It was a good one, starting out with a low key Friday evening consisting of quality time on the couch, a Redbox movie, and a couple of chocolate bars. 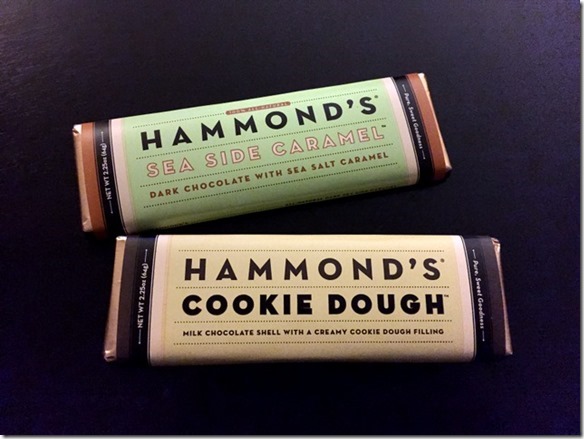 How good do they sound, right? They were okay – nothing I’d get too crazy over though.

The movie we decided to rent was 22 Jump Street, which was also alright but, again, nothing too exciting. 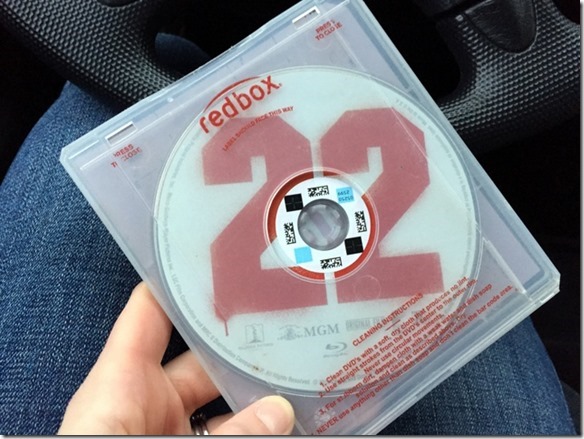 It certainly had its funny parts, but it didn’t leave me laughing nearly as much as the first one.

On Saturday, I had originally planned on bringing Lucas out for an adventure but the timing didn’t work out since he needed a nap earlier than usual. So once he was down, Jay and I got to work around the house. He did a crap ton of cleaning up outside, I did a little Christmas decorating inside, I squeezed in a T25 workout, and then I even managed to head outside for a little walk…even if it was super chilly! 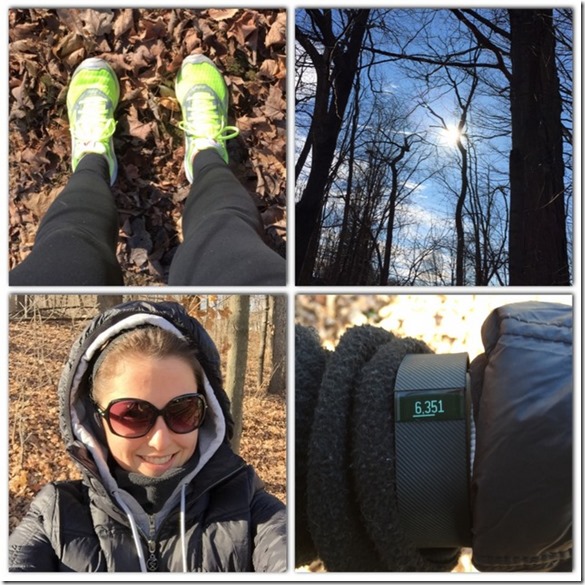 If it wasn’t for the Fitbit Challenge, I probably would have never made it out there! But I wound up with almost 7,000 steps before noon that day, so I’ll take that as a victory.

Later Saturday afternoon, we had some special visitors…Joe, Kate, and Samantha came by to play! 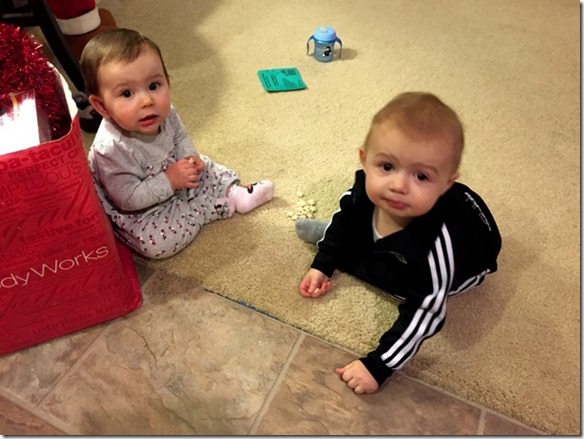 Quite a difference from 9 months ago, right? 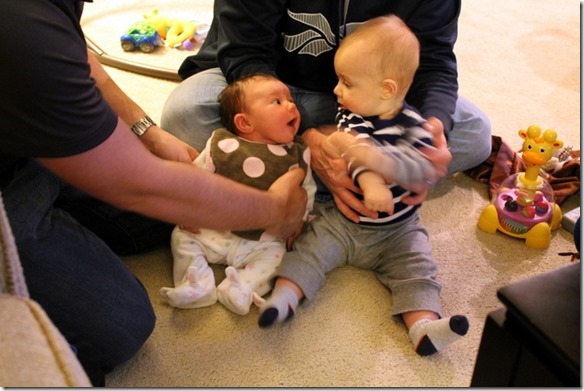 They weren’t really as interested in each other as we thought they might be, although Lucas was all about giving kisses for a little while. 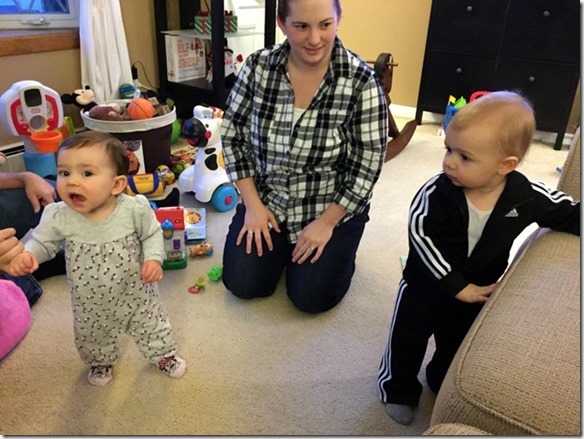 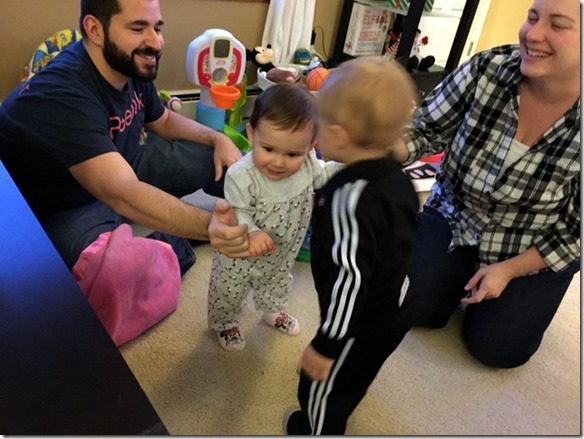 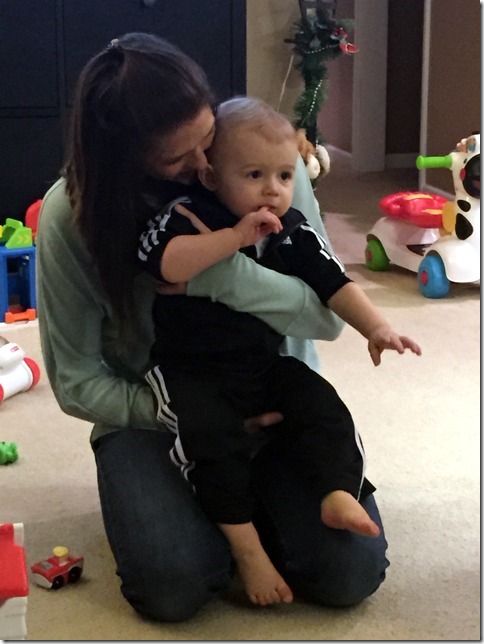 We ordered some pizza for the adults and hung out for a couple of hours before it was eventually bedtime for the babes. 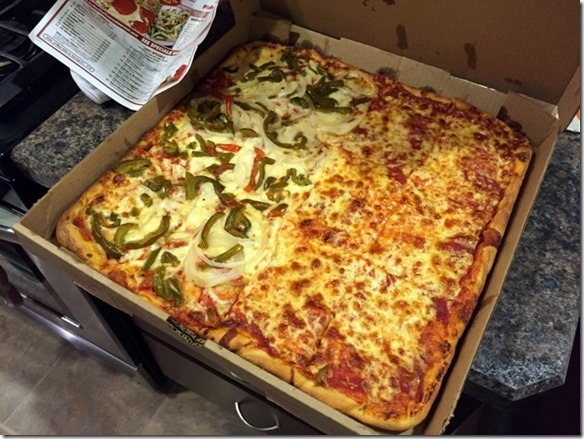 Boy how our evenings have changed!

Saturday night was…interesting. Lucas woke up around 3am and we ended partying until almost 5am. I’ll tell ya, this boy sleeps like a dream 98% of the time, but when he wakes up during the night, he is UP. Ayyy…

So our plan for Sunday was to get up like usual, spend the morning at home, get some work done while Lucas napped, and then head over to my parents’ house. Well, Lucas wanted nothing to do with his morning nap (which NEVER happens), so our plans were a bit foiled for getting anything done at home. Ah well, whatcha gonna do??

Eventually, we made our way out the door and by the time we made it to my parents’ house I was huuungry. Good thing there was absolutely no shortage of snacks available! 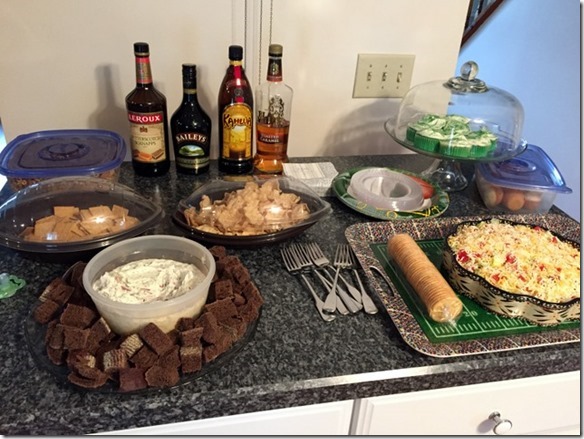 We had all been group texting during the week and when my mom asked if we had any requests, both Jay and my brother gave her a hard time requesting basically everything under the sun. Well wouldn’t ya know, she made almost everything that they asked for. 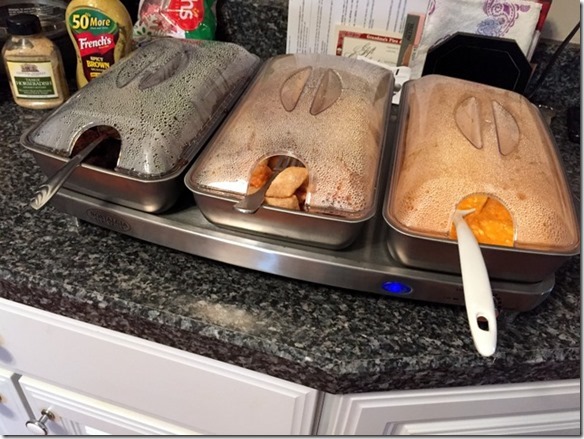 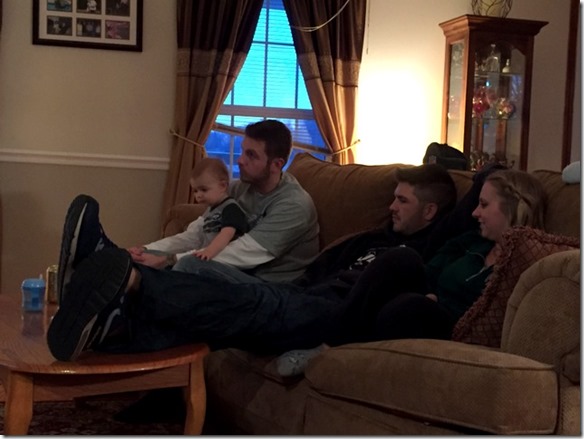 I thought for sure that Lucas would be more than ready for a nap shortly after we arrived so we gave it a shot but it was a NO go. I have no idea what was going on with him, but he has never, ever boycotted all naps. Gahhh!

Luckily, he wasn’t a total beast, and we all managed to have some fun visiting for a few hours. 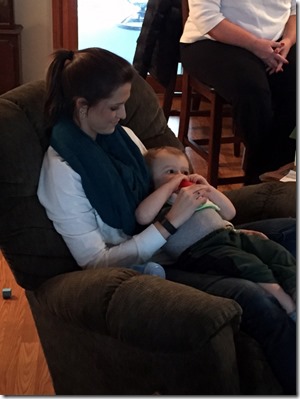 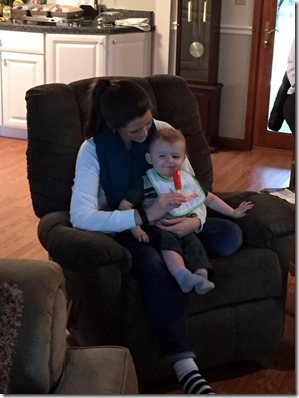 My parents also put together this fun little game for us and said that we couldn’t touch the prize until there was a winner. Well, guess who won… 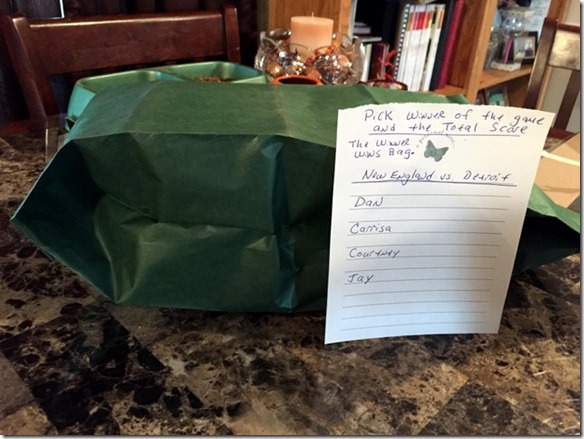 Meee! I won a money treeee! 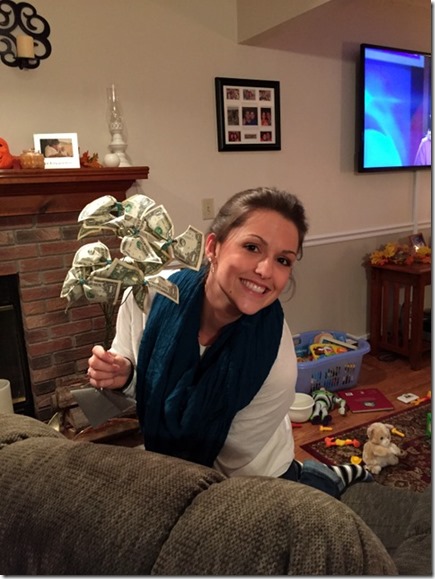 There’s always been a joke with my parents about the “money tree.” When I was younger and used to ask for things, they’d respond with things like, “Ohh sorry, the money tree out back is bare!” This year for Christmas, I jokingly said that I wanted “all sorts of money” so we could buy a brand new house. So hey, I guess this is a good start! I mean, how many people can say they own a money tree? Even if it does only have about $10 on it.

So there’s the highlights of our weekend! How about you guys? Eat any good food? Go anywhere fun? Do any holiday shopping? <—P.S. I’ve got something awesome to share tomorrow involving shopping so stay tuned!