Seeing as though Lucas turned 3 months old about 2 weeks ago, I’m a little behind schedule here BUT…we are officially out of the “newborn” stage and Lucas is now an infant. Holy moly! 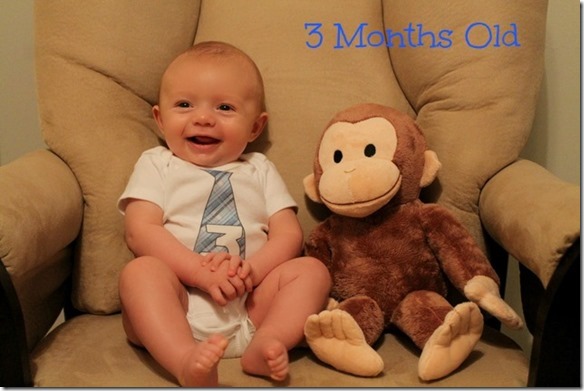 With each and every passing day, our little guy develops more and more of a personality, and while I feel like this is going to become a pattern of me saying this, his third month has definitely been the best one yet.

One thing that we’re quickly discovering over here is that Lucas has quite a strong personality. When he’s happy, he is all giggles and smiles. But when he’s not? Boy, does he let you know it. There’s not much middle ground with him, and sometimes, the high pitched screeches and screams he has the ability to produce just amaze me. And make me want to invest in some ear plugs. Yikes. 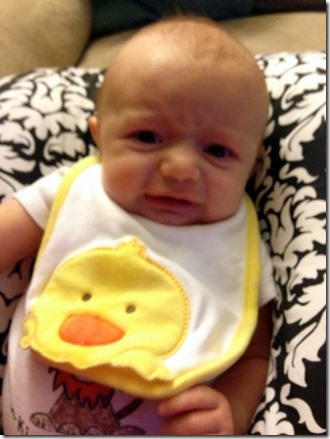 The third month also involved a bit of adjusting since I went back to work. Of course, just when it seemed like we were getting a decent schedule going at home we had to change all that, but thankfully, the transition has gone fairly smooth. Lucas keeps his regular eat-play-sleep routine everyday, but the times of these events can vary from day to day depending on a number of factors (what time he wakes up, how long his naps are, etc.).

So what about eat, play, and sleep?

Well, in terms of eating, Lucas is still doing great. He’s still getting breastmilk exclusively and easily transitions from bottle to breast. Typically, I’ll nurse him in the morning before work, send him off to daycare with (3) 4-5ish ounce bottles, and then he’ll nurse again 2-3 more times in the evening, depending on if he used all three bottles during the day. I pump 2-3 times per day at work and just send whatever I pumped from the previous day with him. We’ve got a pretty good routine down with this and I’ve been feeling really good about it. 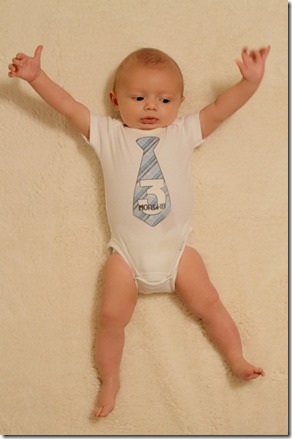 We’re still working on chunking up those long legs of his.

It really is such a cool thing to be able to watch your baby practically grow and develop right before your eyes. I seriously could sit for hours and just stare at him while he seemingly analyzes every little thing around him.

During this past month, Lucas most definitely discovered his feet, and while he had already been interested in his hands before, they definitely became much more of a hot commodity for him. 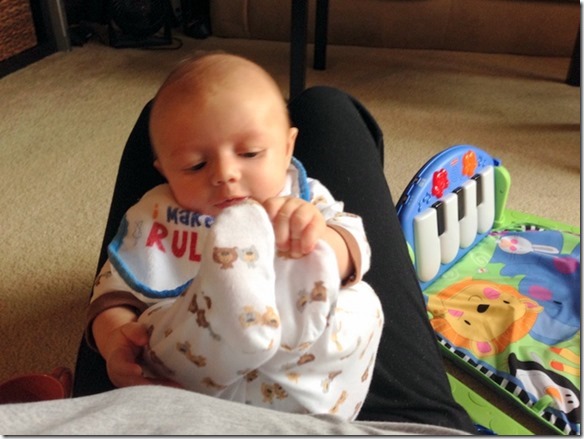 Changing his diapers started to become quite the task…it’s not always easy to get all up in there when he’s practically curled like a ball with his feet *this close* to his mouth!

Lucas continues to love his piano mat and spends some time on it almost daily. He’s also getting a whole lot better at tummy time and can occasionally give us up to 10-15 minutes at a pop. 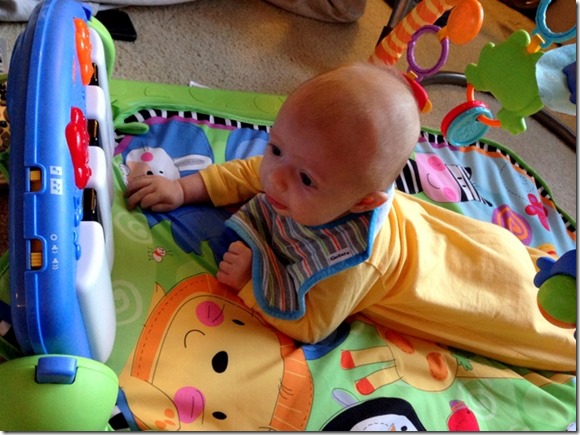 We’ve gotten the occasional role, both from tummy to back and from back to tummy, but he doesn’t do either of them consistently yet. He also began to really start reaching and grabbing for things this month. He isn’t always able to keep his grasp on everything (except for mommy’s hair, of course) but he’s getting better at it by the day. 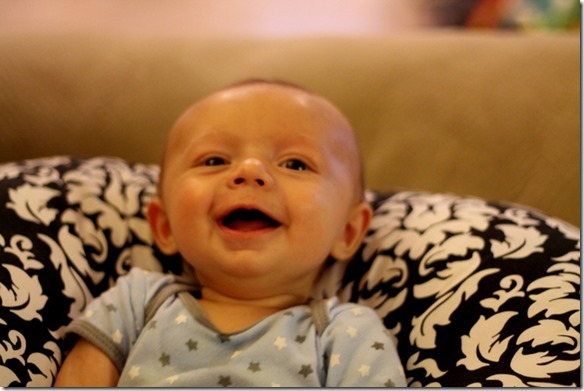 And as much as I hate to admit it, we actually get his biggest smiles when he’s with his daddy. I don’t know what it is, but as soon as he sees daddy is around, Lucas is immediately all smiles and just seems so excited. It’s freakin’ adorable. 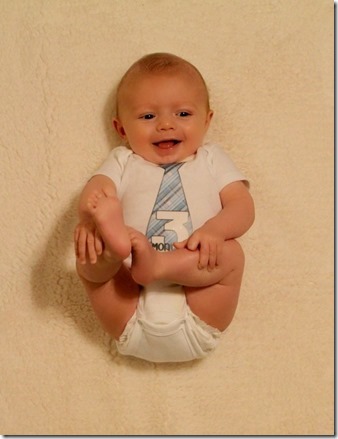 All things considered, sleep hasn’t been too bad. Lucas is not yet sleeping through the night, but typically won’t wake up more than once. We did have a few days where he was giving us 1am and 5am wake up calls, but that was short lived (and I’m assuming could have been a 3-month growth spurt).

We’ll usually start our bedtime routine around 7:30pm, which includes a bath (or a “tubby” as we call it) or sponge bath, diaper change and jammies on, a quick fly around the room from dad, feeding, read a story, quick “talk” about our day, then bed. By the time all is said and done, it’s usually about 8pm by the time he’s asleep. Admittedly, I’ve gotten into the habit of rocking him practically to sleep, which I know is not necessarily the “right” thing to do. But you know what? Whatever. I don’t mind sitting and rocking with him, and I look forward to those few minutes every day (he’s usually asleep within about 5-10 minutes). During the night, he’ll usually wake up to eat anywhere between 2:30-4:00am, and then he’ll wake up anywhere between 6:30-7am (although we usually need to wake him up…he’d probably go later if he could). 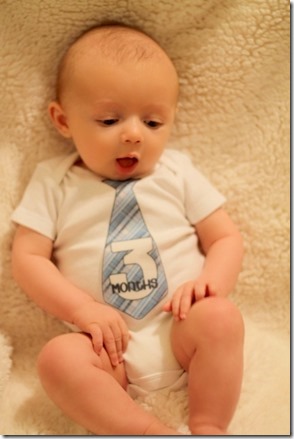 One thing we’re trying to work on doing is transitioning him out of his Rock ‘n’ Play to his crib (he’s still in his own room though). We’ve got him in the crib for pretty much all of his naps, which is also where he sleeps while at daycare, but I’m having a bit of trouble making that transition at night. Some days I stress more about it than others, but I know we’ll get there eventually.

And What About Mommy?

The beginning of this month was probably the toughest transition I’ve ever had to make with going back to work. I was a complete wreck and cried every day for weeks leading up to my return. Once I got back to work, I started feeling a bit better about having to leave Lucas (even though I think the guilt will always be there in some way), but then came the overwhelming feelings of “oh my god, how am I ever going to do it all?”

The fact is, I can’t do it all. And I’m okay with that. Certain things have to take more of a back seat (workouts being one of them right now), but I will say, however, that I am so incredibly lucky to have Jay by my side, who has been amazing at helping out around the house. He’ll help with cleaning, he helps make meals, and he’ll even take care of washing/sterilizing bottles and pump parts while I’m putting Lucas to bed at night. He has helped my sanity in so, so many ways, and I am incredibly blessed to have him.

Being a mom is the most difficult, yet most rewarding job I’ve ever experienced, and as with any sort of job, it comes with its highs and lows. Sure, there are tough days…and there’s been times where I’ve wished to be able to crawl into my bed and just hibernate for a good 24 hours. But then, there are the good days; the days when my cheeks legitimately hurt just from smiling so much with Lucas, and that’s when those bad days become a distant memory. 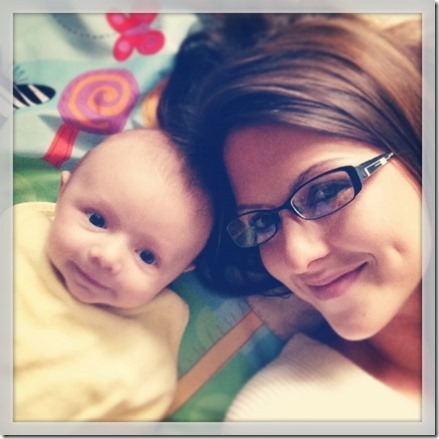 Being a mom is most definitely something I was meant to do…and I’m just so incredibly grateful to be the mom of this wonderful little baby boy. 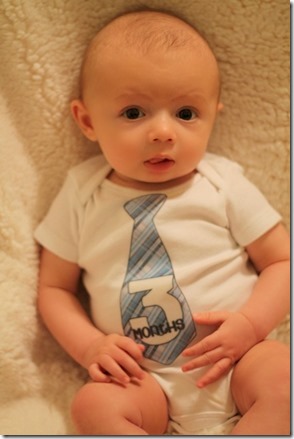 We love you little man, and can’t wait to see what you’ve got in store for us next month!