So at the time I’m finally writing this month’s update out, we’ve actually already made it to 5-1/2 months. So it’s very possible that I’ll forget and/or get things mixed up from one month to the next…but we’ll still give it a try! 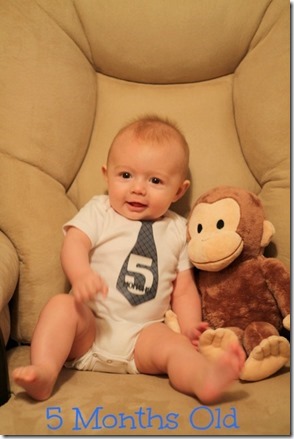 Weight & Height: If I remember correctly, we weighed Lucas around his 5 month birthday and he was clocking in a little over 16lbs. We haven’t actually measured him lately, however, we did have to move his jumper up a notch because he was getting too big…so we know he’s certainly growing long still! 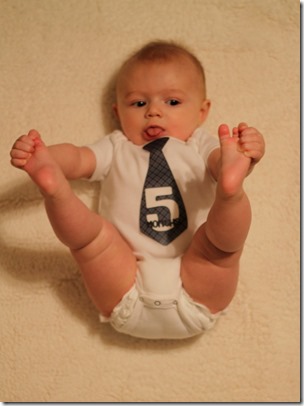 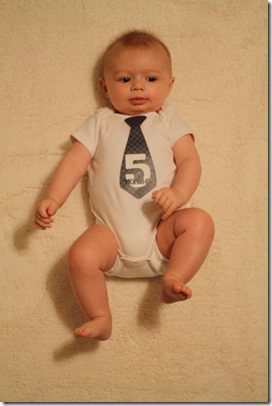 Eating: Eating has never, ever been a problem with this little man. He continues to take 2-3 bottles of breastmilk at daycare, depending on the day, and each bottle is usually about 5 ounces. On the days he’s with me, he nurses exclusively, usually every 3-4 hours. Nursing him can be somewhat of a challenge if there’s too much going on (hello, Mr. Distracted!), so we have to keep the environment pretty chill when possible.

Shortly after he turned 5 months, we started doing some solids(!), but I’ll talk more about that in next month’s update. He’s also shown some improvement in the spit-up department! You’ll still most likely see him in a bib most of the time, but it’s definitely getting better. 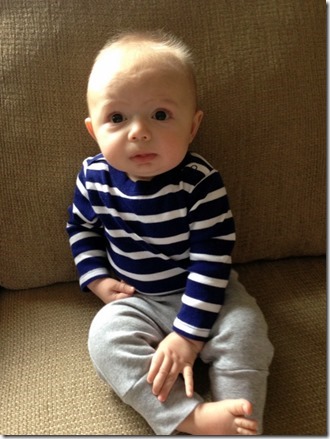 A rare occurrence with no bib!

Sleeping (naps): Pretty much the same as last month. Most days, his first two naps of are usually anywhere between 1-1/2 to 2 hours, and his third nap is usually anywhere between 45 minutes to 1 hour. Depending on his schedule for the day, he may or may not take a fourth cat nap, which is usually in his swing. And sometimes, depending on how long his first nap was, he may wind up skipping his third nap of the day, but that usually makes for a slightly more cranky bedtime.

Sleeping (at night): Things definitely changed a bit in this department shortly after he turned 5 months, so I’ll hold off on that, too. Up to him turning 5 months, night time sleep was pretty good. He moved his bedtime up slightly so he’s usually asleep by 7pm most nights. He gets a dream feed anywhere between 10-11pm, and gets up for the day anywhere between 6:30-7:00pm. There’s been a drop in the number of nights he sleeps all the way through (boo) and continues mostly with his one-time wakeups to eat, anywhere between 2-5am. Most nights, he’ll go right back down and put himself to sleep. Other nights, it’s a bit more of a party…

He’s still in the Rock ‘n’ Play at night, but I’m not giving it much longer, since I think he’s starting to get a little too long and mobile (I’ve watched him on the monitor practically try to kick himself over and/or out of it). This damn thing is the bane of my existence right now, and I hate how I always seem to find an excuse to “just wait one more night” to try the transition. We’ve tried a few random times here and there to see how it goes, but it always winds up with him back in his RNP because…we cave. I’ll admit it.

Clothing: Lucas has grown out of some of his 3-6 month clothes, depending on the maker. We’re officially out of 3 month clothes, and most 6 month clothes fit him great…minus the whole length of the pants thing. Little man has some long legs! 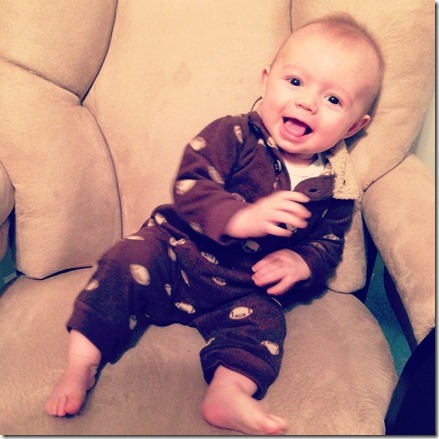 Social: What a happy guy! I’ll tell ya…he just makes us laugh SO, so much. We noticed he was starting to get a little weird around people when they came to visit at our house; however, when we’re out, he was much better about being around strangers. Maybe something about being out of his element? He’s in his glory if you read him a story or play music for him – this month, he’s been loving Florida Georgia Line. He’s also started giggling a bit more, looooves grabbing for faces, and babbling away. 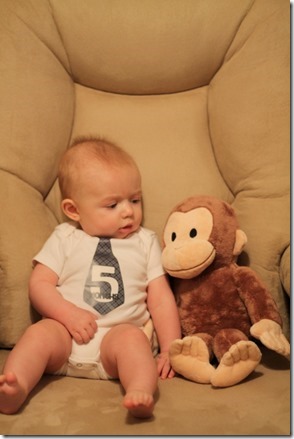 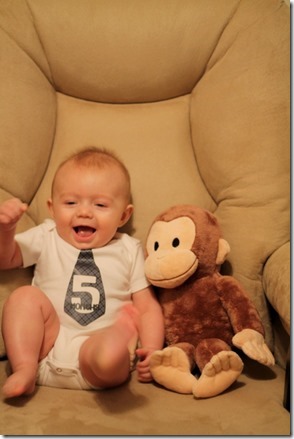 New this month: Month 5 = the month of jumping! While we started him in his jumper during four months, he really started getting going in it this past month. 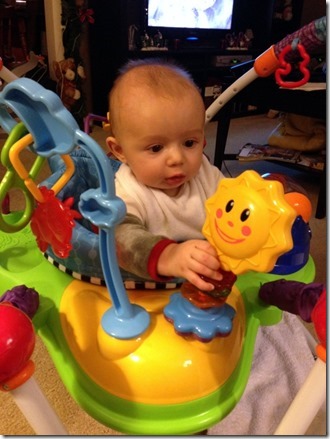 Lucas continues to improve rolling from back to tummy and will occasionally roll from tummy to back; however, he’ll only roll to his right side. The day before he turned 5 months, we also discovered that he could sit up! 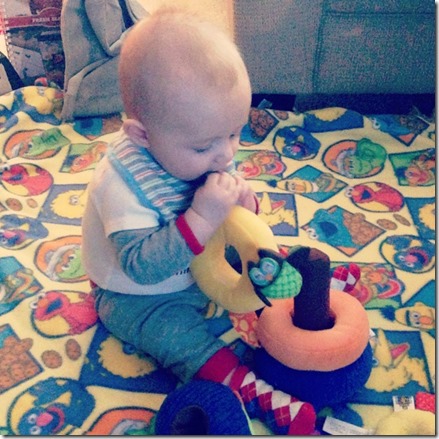 His stability continues to improve daily with sitting unassisted, but we still keep pillows around him for safety. We also thought Lucas had a tooth this past month, but it turned out to be a false alarm. Whoops! 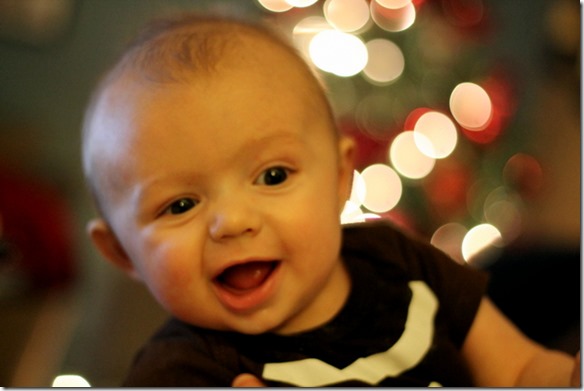 Likes: His jumper, Taggie, Sophie the Giraffe, reading books, listening to music (Bruno Mars and the Florida Georgia Line), being sung to, his swing, being swaddled, Jake and the Neverland Pirates, grabbing at faces, the remote control, splashing in the tub.

Dislikes: His Bumbo seat, his crib at night (still…), being in his car seat for too long, getting stuck on his tummy, pacifiers, poopy diapers.

Mommy: Mommy is doing well! Of course, there’s always our tough days – the ones where I feel like I’ll never get anything done, or I’m exhausted from an extra long wakeup at night, or I can’t figure out x,y, or z – but that’s all part of parenthood, right?

Jay and I have managed to go out on a couple of “dates,” but I’m really hoping we can continue to get more in as Lucas gets older and is more comfortable with his grandparents. As much as we love this little boy to pieces, we still need our one-on-one time too! 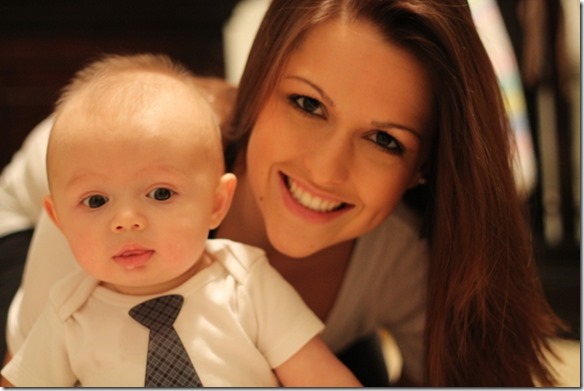 I’ve been feeling good about getting some workouts in lately, and it has really felt awesome to move. They may be shorter and less intense, but I’m cool with that. I look forward to being able to commit to them more (and in the mornings), but I’m sure that’ll come with time.

There are days when I wonder how I manage to keep it all together (mom, wife, maintaining the house, working, eating well, etc.), and some weeks I struggle in one area more than another, but it all somehow seems to balance out in the end. And, honestly, if I didn’t have Jay, I don’t know what I’d do. He continues to amaze me as a dad. 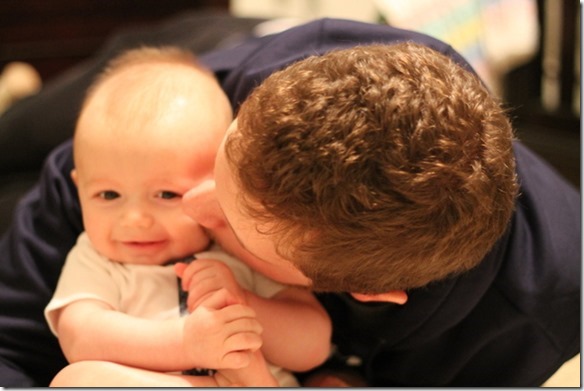 Happy 5 Months, sweet Lucas. You’re quite the character, and we love you more than you’ll ever know. 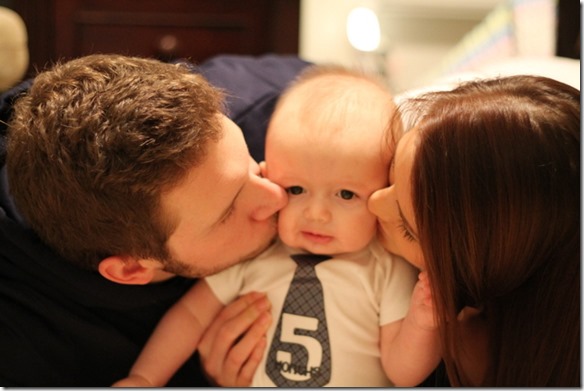